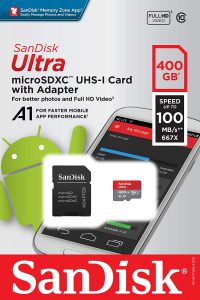 It’s really sort of incredible just how cheap storage media has gotten over the years. I remember when USB was brand new I has a 32 megabyte flash drive I paid well over $100 for. Maybe more even. Well, today’s Amazon deal of the day is a SanDisk Ultra 400GB microSDXC UHS-I card for $62. As of this writing, there’s a little more than 14 hours left. This is a stupidly good deal, particularly considering that aside from Apple devices, basically everything that uses any kind of storage media takes microSD cards. Drones, GoPro cameras, the Nintendo Switch, all kinds of Android devices, etc.

Previously, the “sweet spot" was the 256GB card as the price jump between 256GB and 400GB was significant, but today’s deal that brings these cards down to $60 is real hard to pass up. Last time one of these deals rolled around (which I think I put it at around $80?) I grabbed one for my Switch and it is ridiculously liberating to just never really need to worry about space again, particularly as Nintendo keeps releasing these huge download-only games. This isn’t a junky card either, it’s a name brand, fast card. Usually when these ultra-cheap cards roll around they’re weird, slow, no-name cards we don’t even bother posting about.

And hey, buying through our links helps TouchArcade in a small way, so get loads of storage and throw us a bone at the same time!

Update: Looks like these sold out absurdly quickly. I’m going to keep an eye to see if there’s a restock, but the 256GB card for $44 is also a great deal.