One of my favorite mobile developers over the years has been Mooff Games. It always felt like they were gamers first and foremost, and simply wanted to create their own games that paid homage to the ones they grew up playing and loving. And for me personally all their games just hit those same buttons of nostalgia and love I had for the games I grew up playing. Paying homage to classics is a tricky business though, as nowadays anyone can make games that look or feel retro but to actually capture that almost indescribable “it" factor that made games so much fun to play isn’t always as easy. Mooff could do it though, they had the gift, and their games were always stuffed with tons of personality and references poking fun at video games and pop culture at large.

Well as you may or may not know not too long ago Mooff rebranded their company as The Four Fats, and their most recent mobile efforts have graduated from their cartoonish hand-drawn 2D art of previous games and have gone into full 3D. One thing The Four Fats (and Mooff) did so well was create a huge cast of characters that could appear in all of their games, and while many of those characters are on the almost legally-questionable side of riffing on popular characters from all over the gaming and movie world, they’re also grown into having an identity of their own. They’ve done a pretty good job at retaining the heart of those characters when bringing them to 3D, but it definitely felt like a little bit of personality was lost in the translation from 2D to 3D.

So for their newest game Blackmoor 2 (Free), which is a sequel to their awesome 2014 action platformer Blackmoor – Duberry’s Quest, they’ve met somewhere in the middle. It’s now a 2.5D-style game with 3D environments and occasionally 3D enemies, but 2D characters everywhere else. The result is really fantastic, making for a game that feels decidedly Mooff-y (er, I mean Four Fats-y) but with a lot more depth and interest compared to their older, totally flat games. It’s a nice upgrade and gives their signature style a refreshed feeling that I like a lot. 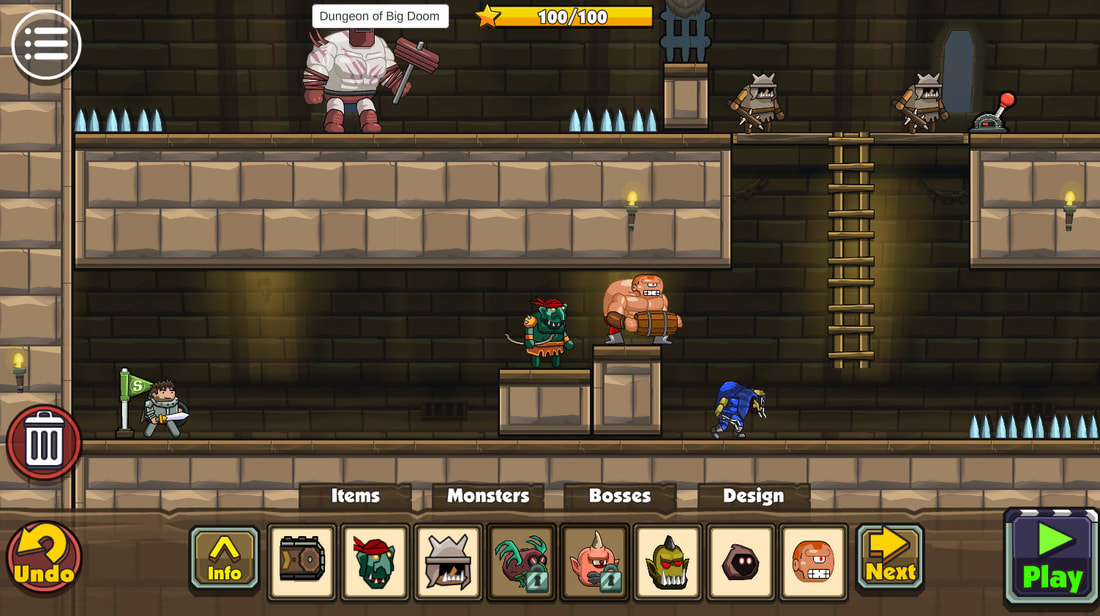 But what of the game itself? Well if you’re familiar with the original Blackmoor, then you’ll have a good idea of what’s in store. If not, this is an action platformer where you’re primarily hacking and slashing away at tons of enemies as you march towards a boss fight at the end of each level. What’s great about Blackmoor 2 (and the original) is that there’s some light RPG elements weaved in that give the game a fantastic sense of progression. Before you know it you’ll be learning new types of offensive moves and special abilities, and you can use the loot you pick up from fallen foes to buy or upgrade a decent assortment of items and weaponry.

The combat in Blackmoor 2 is a lot of fun. While the eventual unlocking of new moves and abilities does add a pinch of strategy to it all, this is by and large a button masher style of game. And I don’t mean that as a negative at all; whaling away on hordes of enemies is a blast. Blackmoor 2 offers a full story-driven campaign that continues the story of the first game, and if that’s all there was to it I’d be perfectly happy. But The Four Fats have gone and created an entire level editor and the ability to share created levels online, meaning there is a buttload of content to play through even after you’ve finished the story. And as in the first game you can also hop online and play together with friends, which works incredibly well and is incredibly fun.

Blackmoor 2 is a free to play game but it’s pretty mild on the shenanigans scale. Unlocking additional characters, upgrading them and your gear, or unlocking new costumes might end up being a bit of a grind if you play for free, and you’ll also have to deal with occasional video ads. There’s a premium unlock for $2.99 which will remove ads and give you a ton of other goodies, including a bunch of coins to ease the upgrade grind, but it doesn’t remove everything, and I’m actually fine with that as that long progression is what I love about games like this. And if the grind does end up getting to you, there’s already a bunch of user created levels built specifically for earning tons of coins and experience, so you could always go that route.

Whatever the case, if you’re a returning Blackmoor fan or this is your first time with the series but you love a good old-school inspired action platformer, you’ve got to give Blackmoor 2 a download for free.