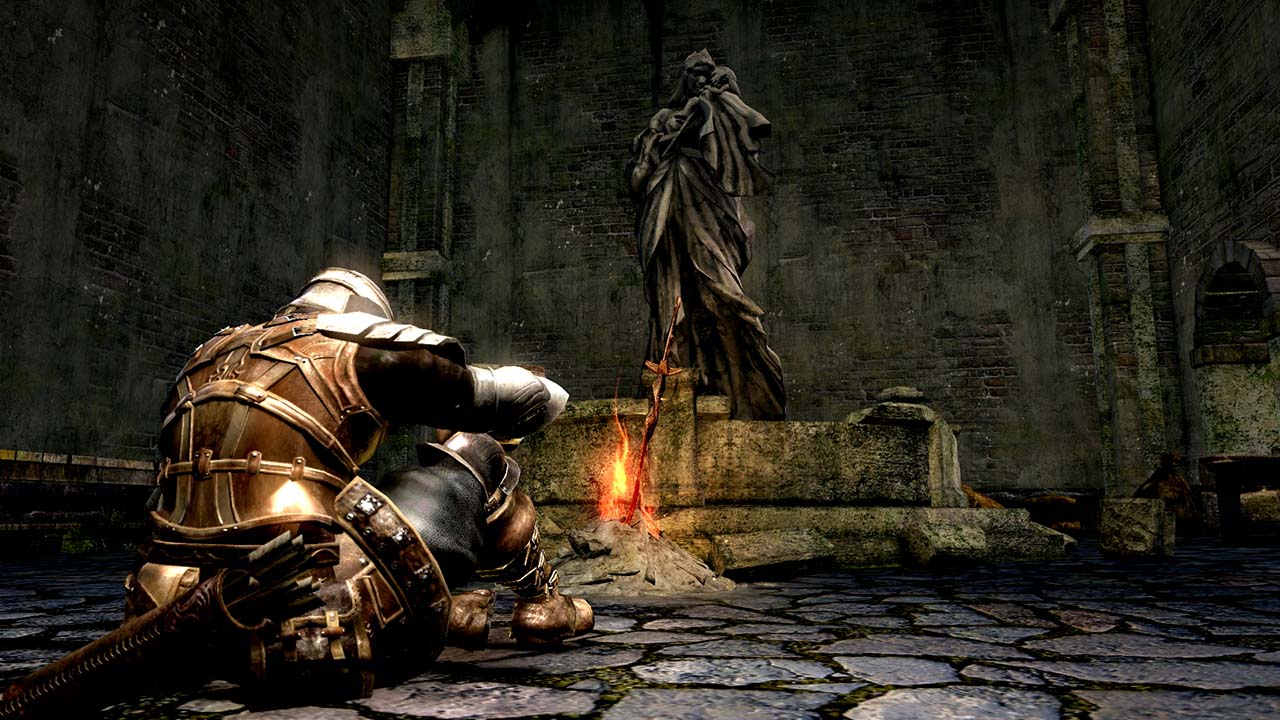 Long overdue for the SwitchArcade Roundup, we wrap up this week with a Game of the Day featuring Dark Souls: Remastered. I’m a total newbie to the Dark Souls series, so to say I got my butt kicked every which way but the subway would be an understatement. Dark Souls is the type of game that will constantly put you in your place, but each time you perish, it’s a lesson to be learned. You eventually pick up on enemy tells, how to block, how to evade certain attacks, when an enemy is vulnerable, where an enemy hides–awaiting an ambush, and much more.

I love the interconnected world of Dark Souls, and how different paths open up, leading to shortcuts to previously explored areas. As always, seeing a bonfire is such a great relief, allowing you to spend your hard-earned souls and also use the bonfire as a continue point for when you die next. Note: I said WHEN you die next, and not IF you die. 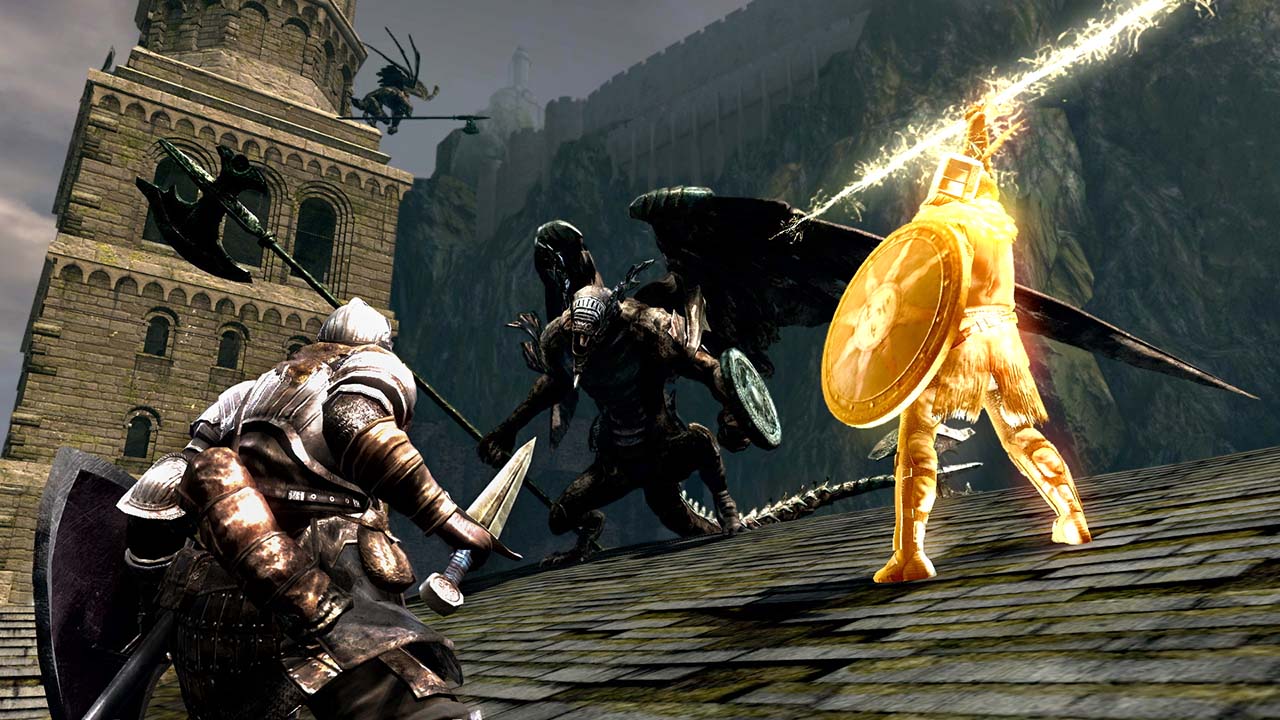 The amount of secrets and ways to go about exploring the world of the game are truly many. While the developers/designers of Dark Souls have an intended path through the game for starting players to go on, you need not heed their advice–what little context the game gives you. Instead, you’re free to explore at your leisure. Heck, when you first arrive at the Firelink Shrine, you’re free to go underground. Sure, you’ll be fresh meat for the invulnerable  ghosts that inhabit the area, but you have the freedom (and the death wish) to do so, if you so choose. 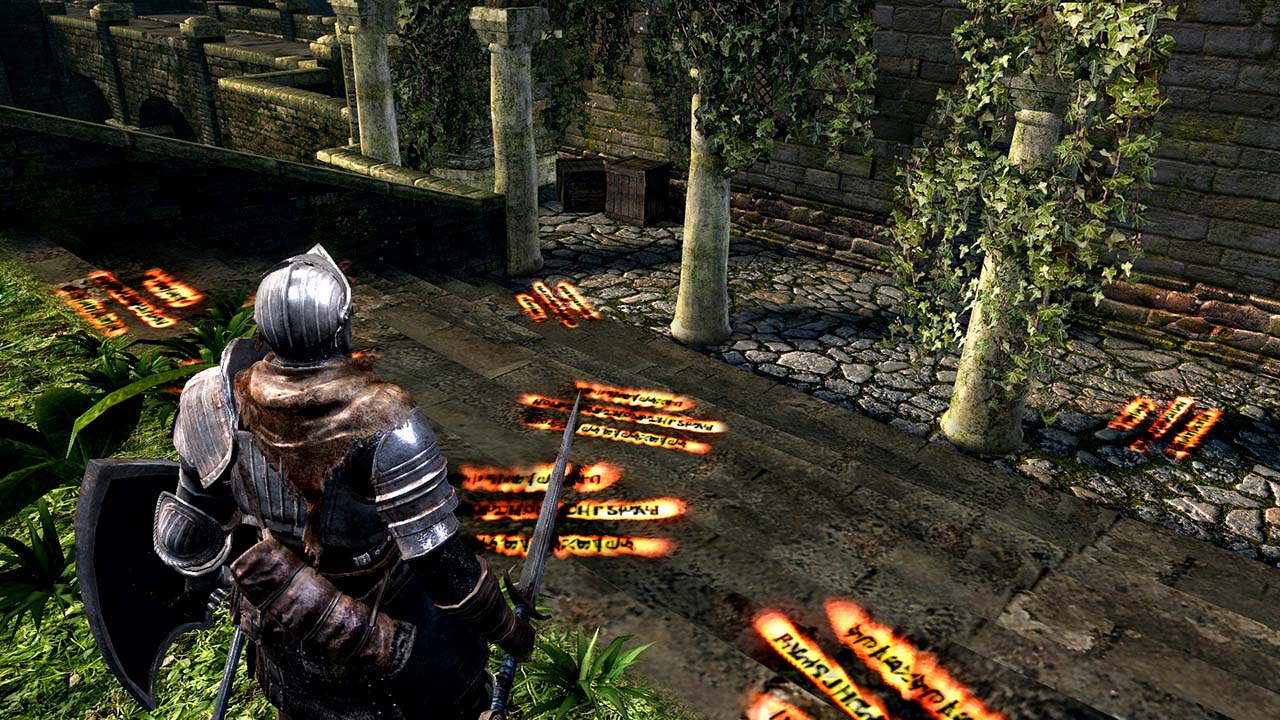 I continue to make slow progress through Dark Souls: Remastered, but while my progress is indeed slow, it’s also steady. As I stated, I’m learning how the areas of the game are designed, where shortcuts are, where bonfires are located, what enemies I’m too weak or unprepared to fight and where they’re situated in the world, and constantly leveling up myself and upgrading my gear to make me one lean, mean, fighting machi–and I died again.

Death is no stranger to me in Dark Souls: Remastered–to the point that it’s almost as common to me in game as blinking and breathing to me in real life. Death results in dropping all of your collected souls, and if you don’t go back to pick them up before your next death, they’re gone for good. That’s something I’ve gotten used to. 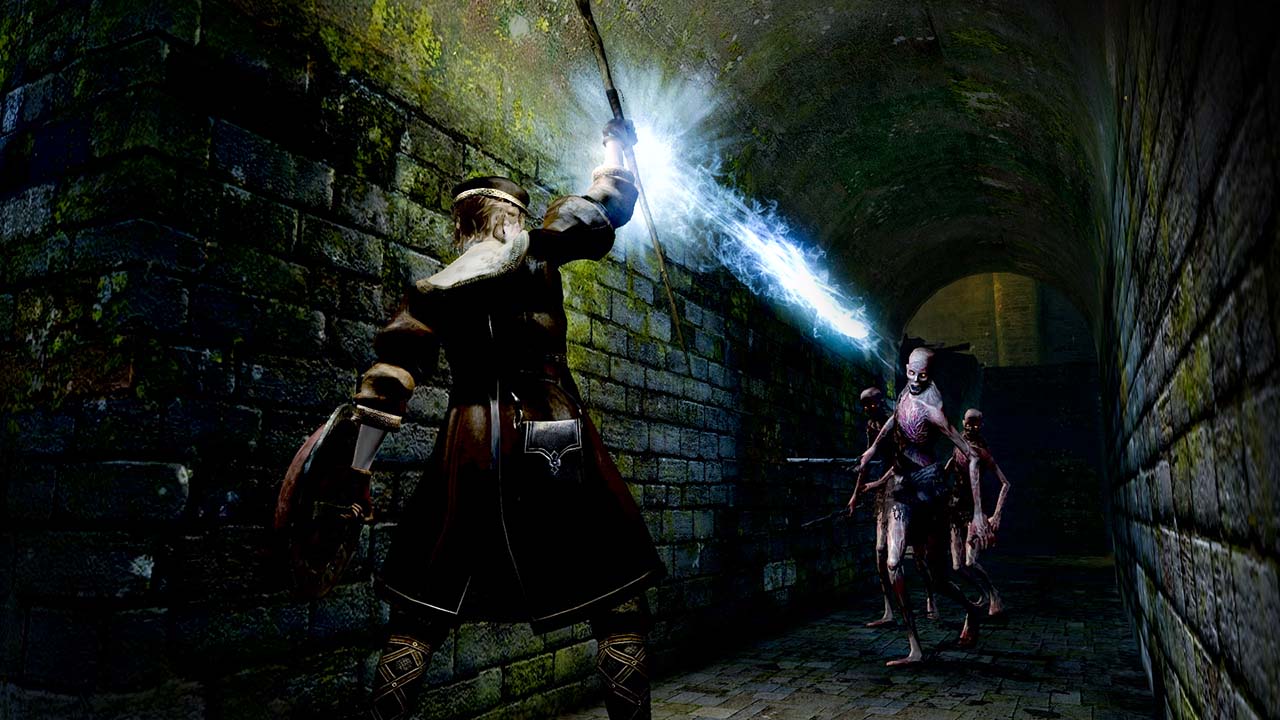 Now, if you need me, I’m going to return to the world of Dark Souls: Remastered and proceed to get my butt handed to me on a silver platter–because only the best kind of platter does my butt deserve to be handed to me on!

For everyone else, let’s get to the highlights of the Direct. To start us off, three new characters were announced for the roster: Ken from the Street Fighter series–serving as an Echo fighter to Ryu–Incineroar from the Pokemon series, and an “out of left field pick if there ever was one", the Super Mario series enemy Piranha Plant joins the roster. Piranha Plant will be available as DLC for early purchasers of Super Smash Bros. Ultimate. If you register your physical version of the game or simply buy a digital copy before January 31st, 2019, you’ll get Piranha Plant, a new stage, and new music for free when this content is available in February 2019. 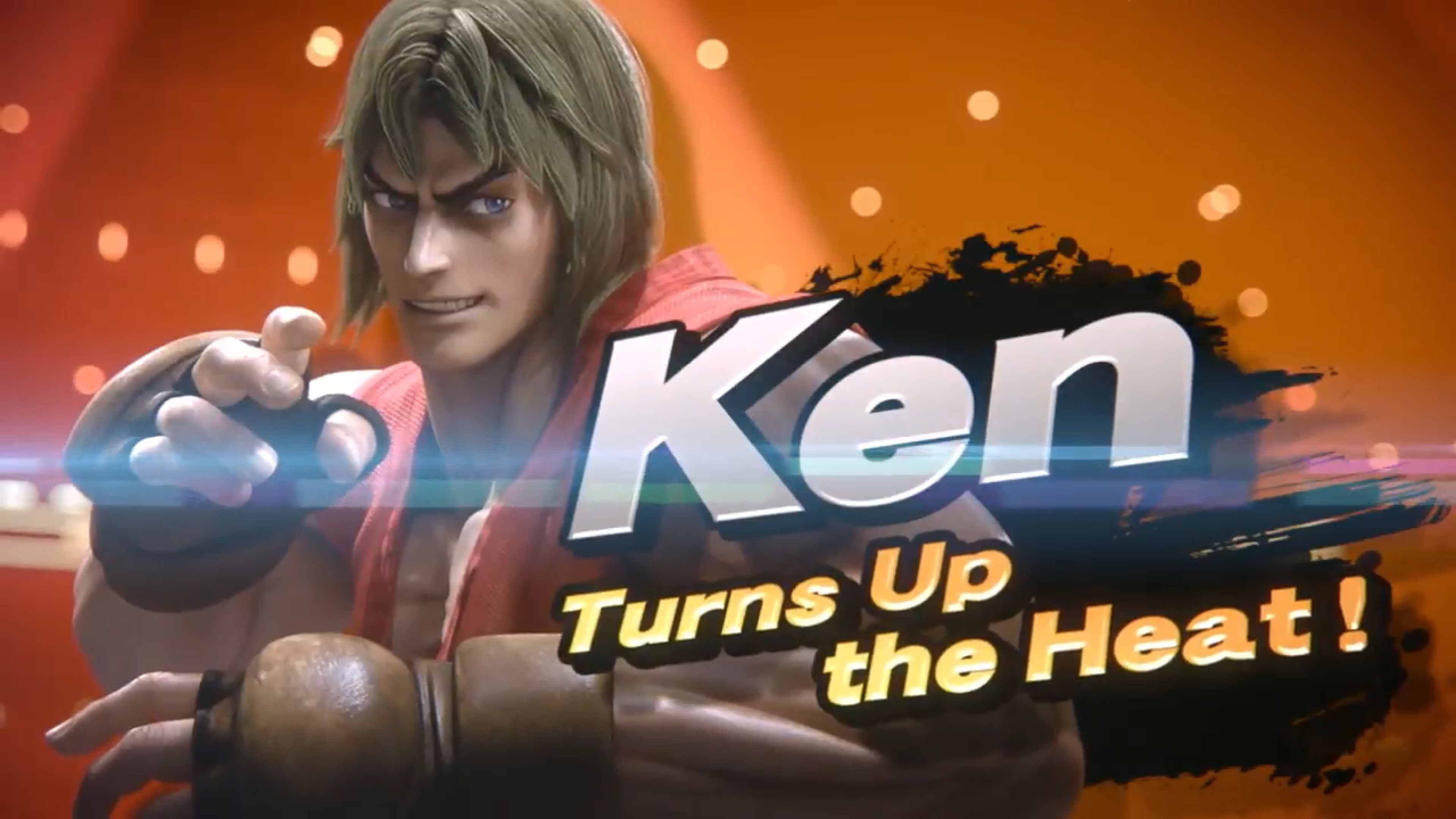 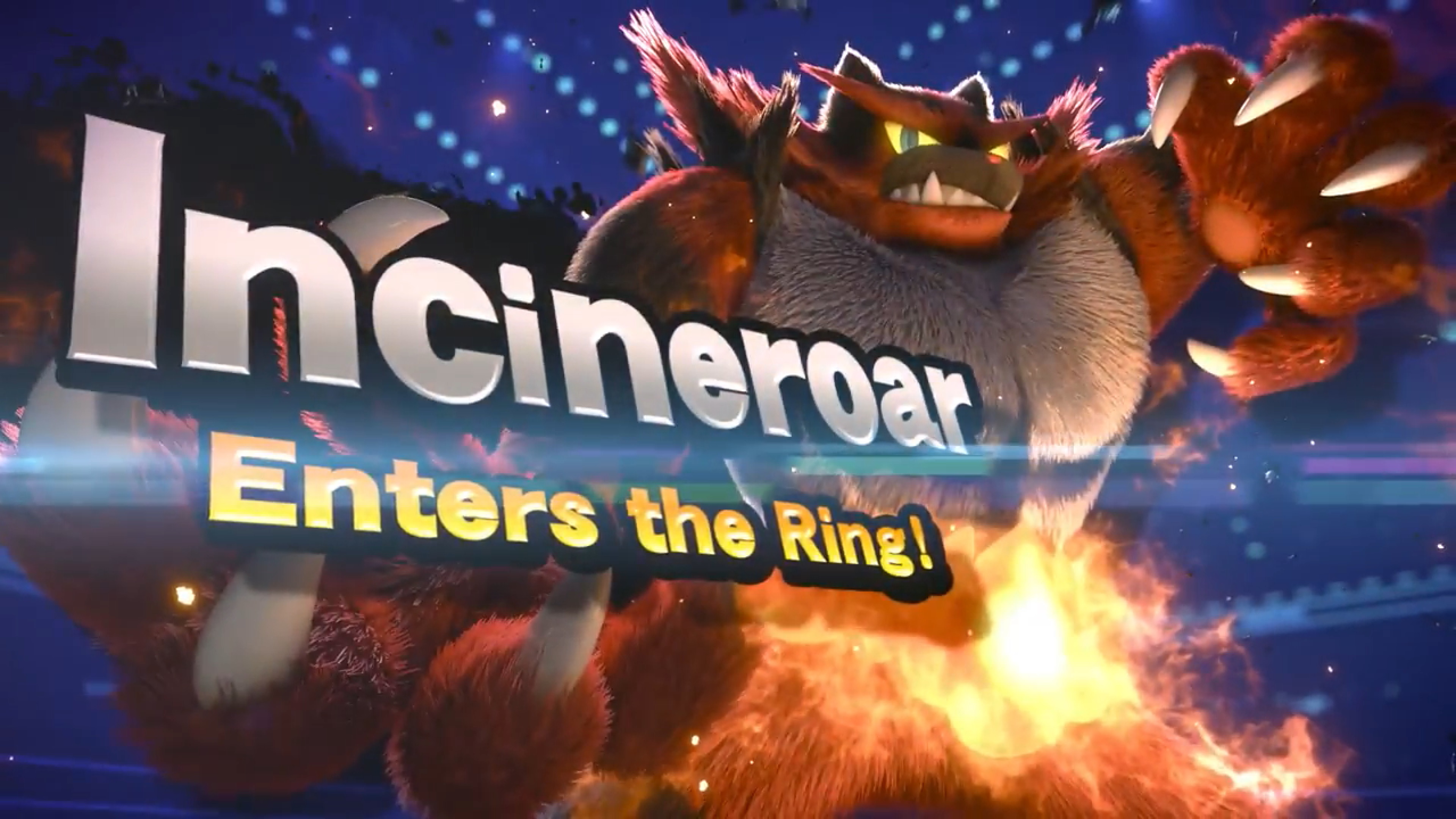 Speaking of new content to Super Smash Bros. Ultimate, throughout 2019 and up until February 2020, there will be five packs of paid DLC, each containing a new fighter (Nintendo was quick to address that these will be completely new fighters built from the ground-up and not Echo fighters), a new stage, and new music tracks for $5.99 per pack. You can also opt to purchase the Fighters Pass which essentially serves as a season pass to get all five fighters, stages, and all of the music tracks as each DLC pack releases. The price for the Fighters Pass is set at $24.99, and those who buy the pass will receive an in-game costume for their Mii based off of Xenoblade Chronicles 2‘s Rex.

With the new and returning characters to Super Smash Bros. Ultimate, a whole host of amiibo figures are being manufactured specifically for the game. On December 7th, Inkling, Ridley, and Wolf amiibo will be available for purchase. On February 15th, King K. Rool, the Ice Climbers, and Piranha Plant join the Super Smash Bros. amiibo line. Finally, releasing in 2019 but without firm dates will be Isabelle, Pichu, Ken, Young Link, and Daisy. 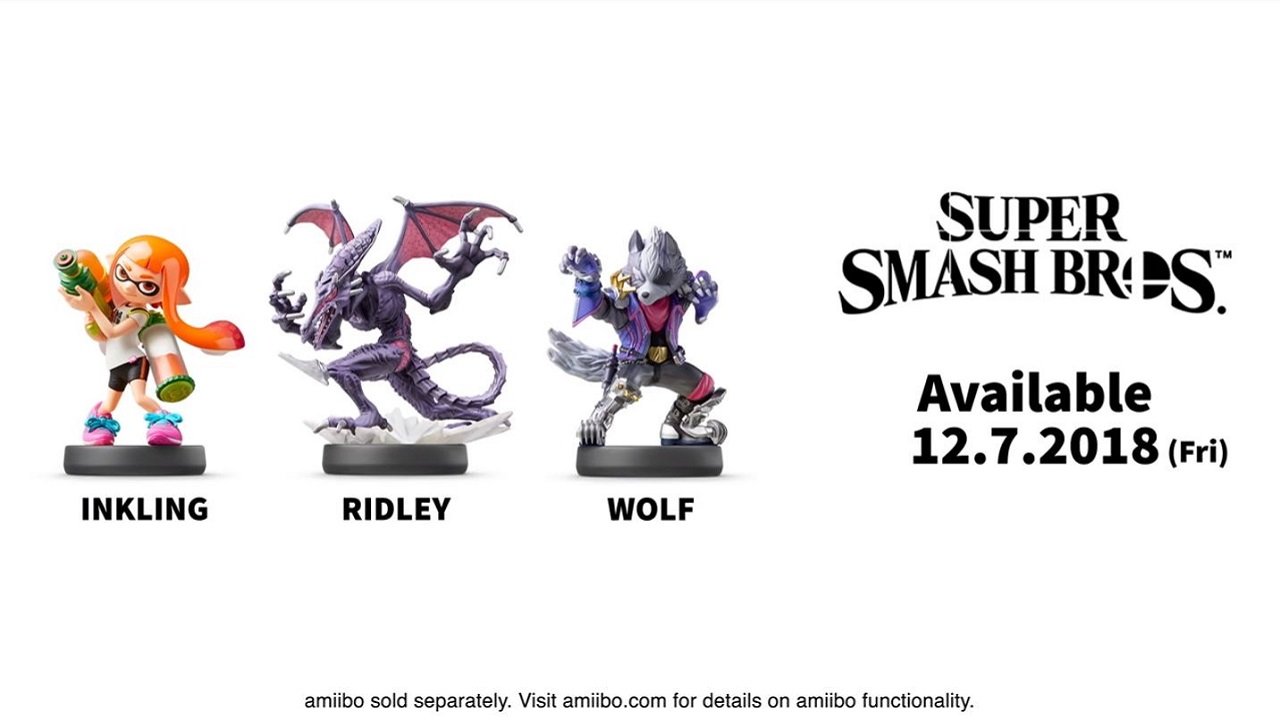 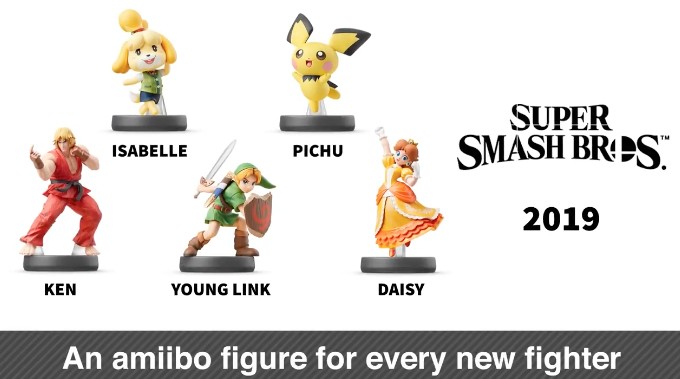 Other information from the Super Smash Bros. Ultimate Direct included details about the new Spirits mode that replaces trophies as the collectible of Ultimate. These Spirits can be equipped to your fighters to power them up after being won in Spirit Battles and from purchasing them in the in-game shop. Additionally, new Assist Trophies were introduced, such as ARMS‘ Spring Man, Mega Man‘s Dr. Wily, Street Fighter‘s Guile, and Mario Paint‘s Fly Swatter.

Where there are goblins, there is treasure to be found! Summon your own portal to untold riches with the exclusive #DiabloSwitch Loot Goblin amiibo – available Dec 2018! pic.twitter.com/jLe4vMmkcH

The loot-based dungeon-crawler finally arrives on the Nintendo Switch today. Not only that, but you can also pick up the Diablo III Special Edition Nintendo Switch today as well, if you so have the inclination! As you’ll see with my review of the Switch version of Diablo III: Eternal Collection, the main draw here is portability and some Nintendo-centric exclusive additions.

I don’t want to work. I want to bang on the drum all day. And you can with Taiko no Tatsujin: Drum ‘n’ Fun for the Nintendo Switch! Use the Joy-Con controllers as if they were mallets and drum your heart away to over 70 music tracks, some from Nintendo licensed games and franchises like Super Mario Odyssey, Splatoon 2, and Kirby. Available exclusively on the Nintendo eShop, Taiko no Tatsujin: Drum ‘n’ Fun brings the party to your Switch today.

WINLIGHT brings this 3D fantasy MMORPG to the Switch with Elemental Knights R. From the game’s four starting classes, you complete quests and level up to gain access to even more classes. Play online with friends and total strangers as you vanquish monsters, beasts, and dragons–to name a few– across a multitude of themed locales such as caves, forests, mountains, and more. Obviously, World of Warcraft or Final Fantasy XIV this ain’t, but for its price and budget, Elemental Knights R might be worth checking out for those Switch owners starving for any kind of MMORPG experience on the system.

That wraps up this week of Nintendo Switch coverage here on TouchArcade. What games will you be playing over this first weekend of November?

Until next time, keep your Joy-Cons charged and your Switches loaded with great games!