Help! I’m Haunted ($2.99) pretty proudly wears its inspiration on its sleeve. Right from the title screen where you have to pick up a ringing phone to proceed, this game is an obvious homage to Daisuke Amaya’s Kero Blaster ($5.99). The basic game outline, the controls, and even the weaponry are inspired by that game. As sources go, it’s not a bad choice. Kero Blaster plays very well on mobile thanks to its inventive touch controls, and virtually no one has tried to copy it. It’s almost certainly not getting a sequel, as its developer doesn’t seem very interested in making follow-ups. So sure, bring on the imitators. After all, if no one tried to follow in Super Mario Bros.‘s footsteps, how many great games would never have been made? 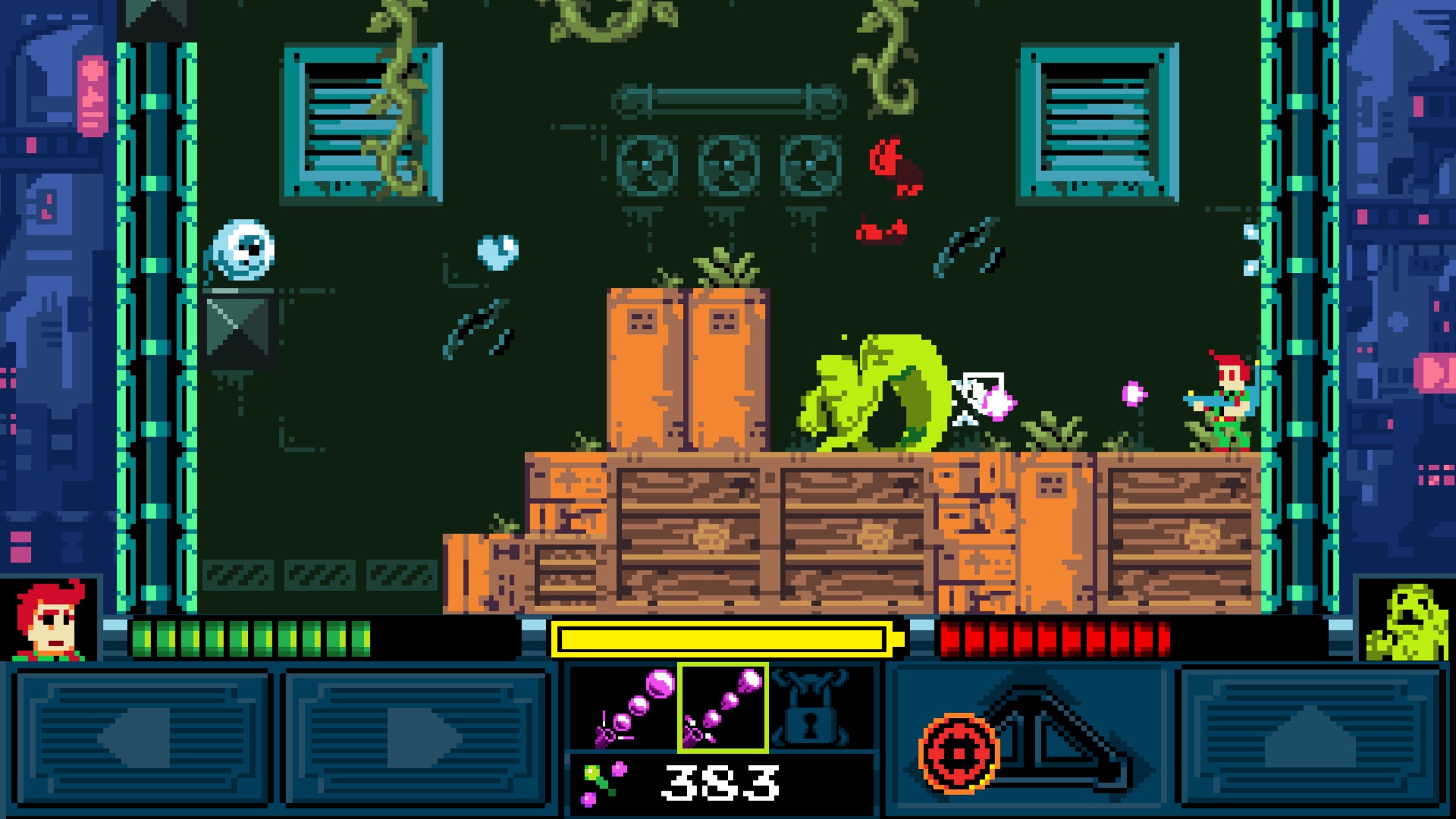 Help! I’m Haunted isn’t some cheap copy, either. Whatever it may lack in originality, it makes a good effort to make up for through sheer polish. Keeping in mind the target it’s aiming at, Help! I’m Haunted nails its visuals and doesn’t slouch on the soundtrack, either. It controls well, offers quite a few stages, and has fairly solid level design. Outside of a few irritating points, it’s a very pleasant game to run through. There are really just a couple of flies in the ointment. First, it’s so busy chasing Kero Blaster that it never really finds an identity of its own. Related to that, the other issue is that it ends up falling short of its inspiration in almost every aspect. How much those points matter are going to depend entirely on the player’s experience with Kero Blaster and what they’re looking for out of this particular game.

If you can somehow take the game on its own, it’s a fun action-platformer that has enough variety in its weaponry and enemies that it manages to feel quite fresh the whole way through. Your character, a sort of Ghostbusters expy, ventures out to various locations to rescue people who are being haunted by nasty supernatural monsters and ghouls. Your goal is to reach the end of the stage and touch the character who called for help, but you’ll have to blast your way through tons of baddies to reach them. There are occasional moments where you’ll have to exercise your jumping skills, but even the toughest of these situations shouldn’t be too hard for anyone with platforming experience. Enemies will drop a currency that you can use to buy upgrades for your guns, and successfully completing a stage will give you a nice bonus. You’ll also find health pick-ups now and then, but you can’t depend on them showing up so it’s best to avoid taking unnecessary hits. 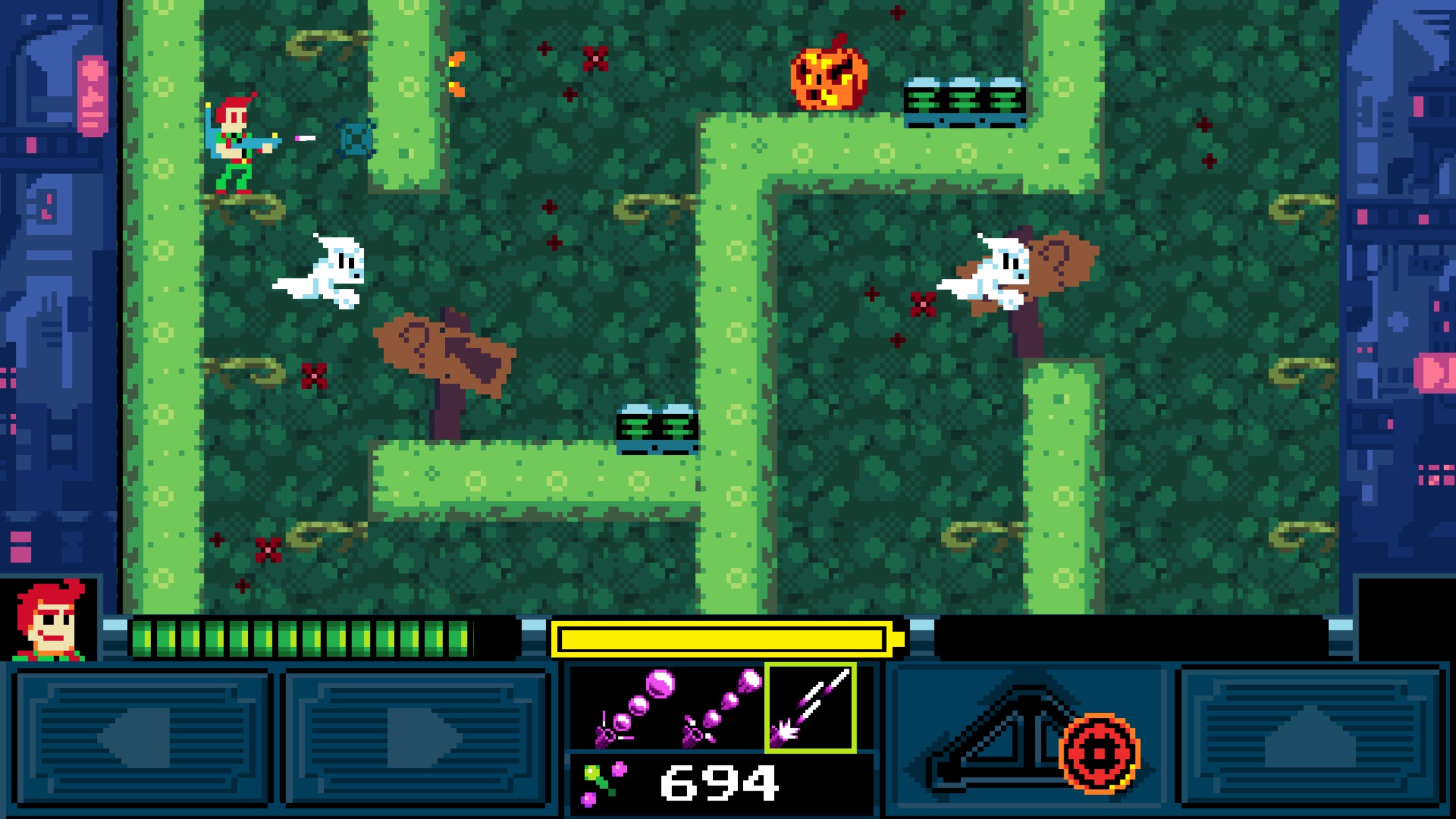 Rescue all the people requesting help and you’ll open up a boss stage. It works like any other stage, but instead of finding a citizen in need at the end, you’ll find a big boss that you have to kill. There are four of these bosses in total, and the last of them is probably one of the only times during the game where you really need to pay attention. Almost everything else will easily fall to your impressive arsenal provided you exercise the smallest amount of caution. This is one of the weak points of the game. It’s just too easy until the very, very end. Your character can take a ton of hits right from the start, and as long as you catch on to the idea that you have to swap your active weapon in particular situations, the enemies are unlikely to wear that health meter down before you reach the end of the stage. The first few bosses use extremely simple patterns, and even if you don’t pay attention, odds are good you’ll whittle their health bars down to nothing before they can even peel off half of yours.

So if you’re looking for a challenge, you probably won’t find one here. The whole game can be cleared in a couple of hours, and unless you’re interested in replaying levels to fill out your arsenal, that’s all there is to it. It can be kind of fun to revisit earlier stages with a powered-up weapon from later in the game, but doing so tends to reveal just how little the game offers outside of gun play. As your bullets wipe out everything in your path, it’s hard to avoid noticing how plain the level layouts are, especially in the first several stages. The visual design of these stages is excellent. You can find great details in almost every location, and there really is a fair bit of variety with regards to the settings. But in terms of the mechanical design, there’s too much repetition and too few meaningful interactions with the environment. Walls, ceilings, and platforms sometimes feel like they’re only there to keep you from flooding the screen with the powered up water shot. 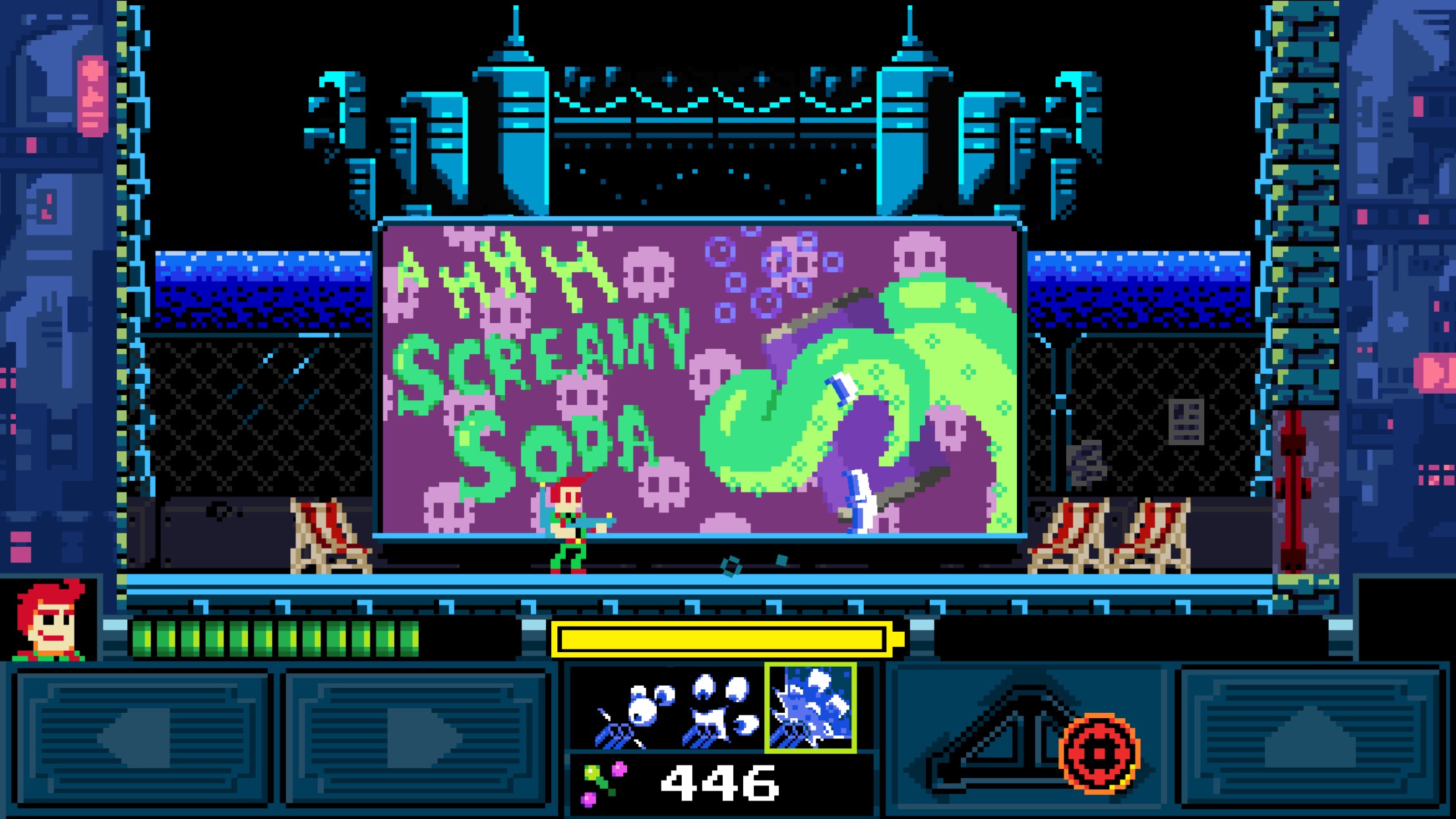 These are things that most people probably won’t care about too much on their first playthrough of the game, so I’m not sure how big of a problem they are. More noticeable may be that the controls occasionally feel a little too stiff, hits don’t always feel perfectly fair, and that weapon switching via the menu is just enough of a hassle that you’ll probably try to muscle through with the weapon you have equipped unless things really aren’t working out. Kero Blaster isn’t free of any of these criticisms either, mind you, but for some reason they draw my attention a little more in Help! I’m Haunted. I suspect the weapon switching comes down to the menu being accessible from the center of the screen in this game as opposed to the right side of the screen in Kero Blaster, and the rest is likely down to level design and enemy placement. I have to stress that I feel like these are very minor issues in the grand scheme of things, and are really only obvious because the game feels smooth to play the vast majority of the time.

If you haven’t played Kero Blaster before, well, you should. But if you haven’t, the way that the controls work is that you have left and right arrows to move and a sort of stick shift that allows you to lock your gunfire to the left, right, or straight up. Beside that stick shift, you’ve got a nice little jump button. This allows you to set your gun firing while you focus on movement, and it’s a great solution for this kind of game on mobile. Help! I’m Haunted completely copies that layout, but adds a few extra moves like a dash and a roll that can be a bit tricky to pull off with touch controls. It’s pretty easy to forget about these advanced moves, only to be reminded of them when you accidentally pull one off. You certainly don’t need them to get through the game. MFi controller support is in, but certain functions (like the menu to switch weapons) still require you to use the touch screen. The developer will apparently be addressing this in a future update, though. 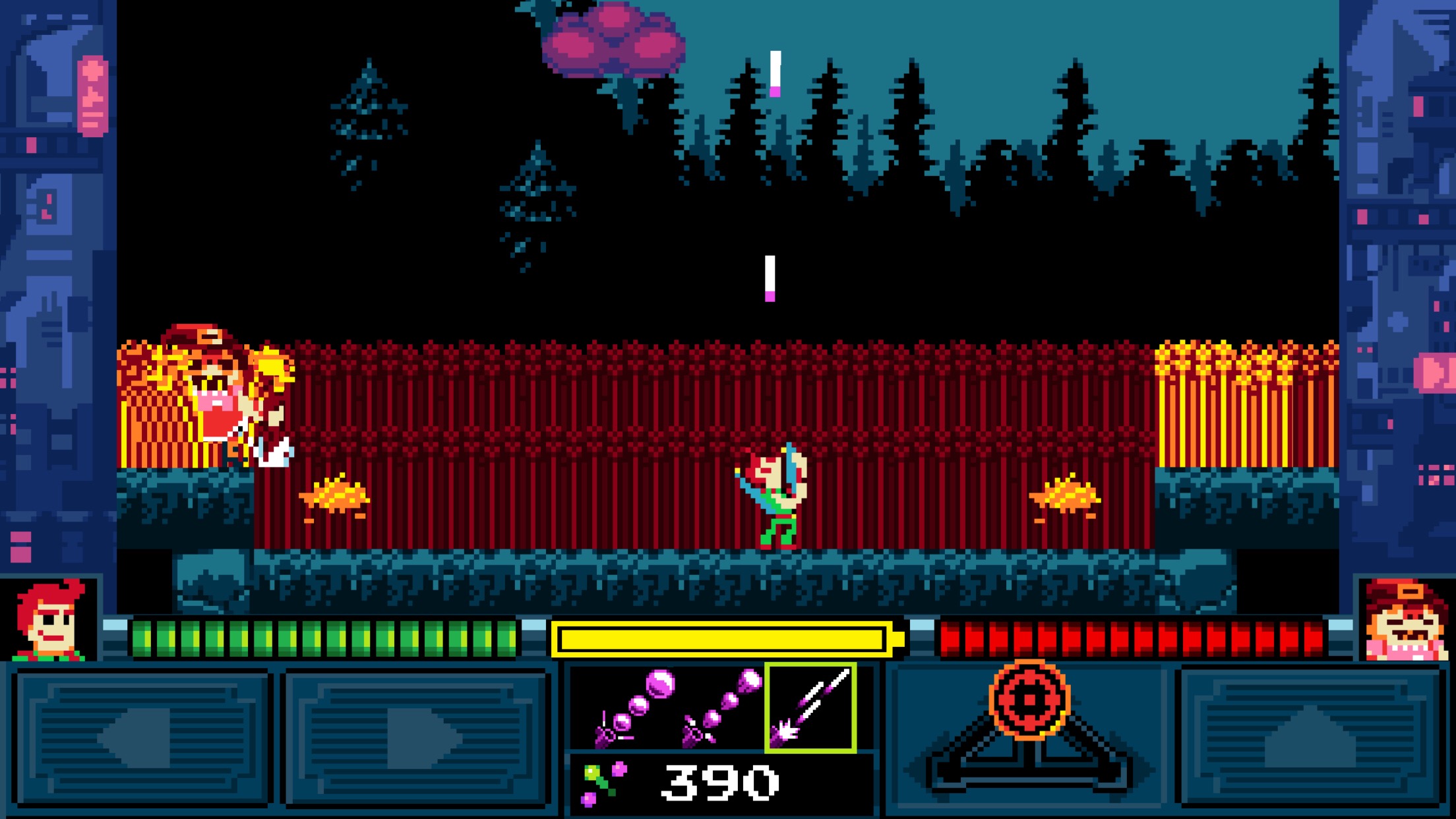 I don’t want to sound too down on Help! I’m Haunted. It’s an enjoyable game at a very agreeable price. As a massive fan of Kero Blaster, I’m glad to play a game that takes cues from it without falling flat on its face. I had a pleasant time blasting through the game and had a good bit of fun once things heated up near the end. Still, once the credits finished rolling, I found myself not wanting to replay this game, but instead had a strong desire to fire up the considerably better Kero Blaster once again. That said, Help! I’m Haunted is good enough to recommend to those who enjoyed Kero Blaster or just want a decent run ‘n gun, even if it’s ultimately a little too obsessed with the object of its admiration for its own good.