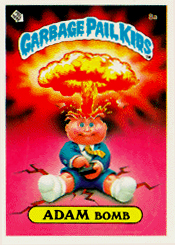 On its surface, this story isn’t that interesting as if I had a dollar for every time we heard that some obscure IP you probably don’t remember is getting a mobile tie-in we wouldn’t need Patreon. However, the Garbage Pail Kids is one hell of an IP, and defined a large part of the childhood of boys who grew up in the 80’s. If you don’t fit that slim demographic, here’s the gist: For whatever reason, Cabbage Patch Kids were unbelievably popular, and at least in my life, were one of the original chase toys that people go wild trying to find during the holidays- Like an earlier version of Tickle Me Elmo. Garbage Pail Kids, on the other hand, directly ribbed Cabbage Patch dolls with terrible puns and humor that perfectly fit in line with what you’d find to be absolutely hilarious as a young boy. Basically, if you’ve ever read a copy of Mad Magazine, it’s that humor, plus trading cards, plus making fun of Cabbage Patch dolls.

Amusingly enough, at my school, just around the time interest in the Garbage Pail Kids and their associated trading cards was really starting to wane, for some insane reason my school decided to ban them. It was one of those administrative decisions that couldn’t have been timed more poorly, as if they would’ve waited another week or two absolutely no one would have cared about the Garbage Pail Kids anymore. Turning them into forbidden contraband on school grounds suddenly made the stack of Garbage Pail Kids cards everyone had the coolest thing you could possibly bring to school.

But, that’s sort of the rub with these IP games, and why they work. Maybe you couldn’t possibly care less about Hearthstone, but you do care about the Garbage Pail Kids, so that’s what gets you to check out this genre. I mean, I’m certainly planning on giving this one a go, just due to my ties to the IP, so the plan is already working.