Originally, I had no intentions of writing a review for this SEGA Forever release of Streets of Rage 2 (Free). Not because the game isn’t worthy or its release on the platform is of little note, mind you. In fact, it’s quite the opposite. SEGA’s 16-bit console is a well-known quantity in the West, even nearly 30 years after its initial release, and thanks to the company keeping their Genesis library in fairly regular circulation, its biggest hits are so widely-played and famous that there’s practically no need for new reviews. You probably don’t need me to tell you about Streets of Rage 2. It’s one of the best games on the Genesis, and arguably the best side-scrolling beat-em-up ever made. Outside of the Sonic the Hedgehog games and perhaps Aladdin, there aren’t many games that personify the Genesis better than Streets of Rage 2. 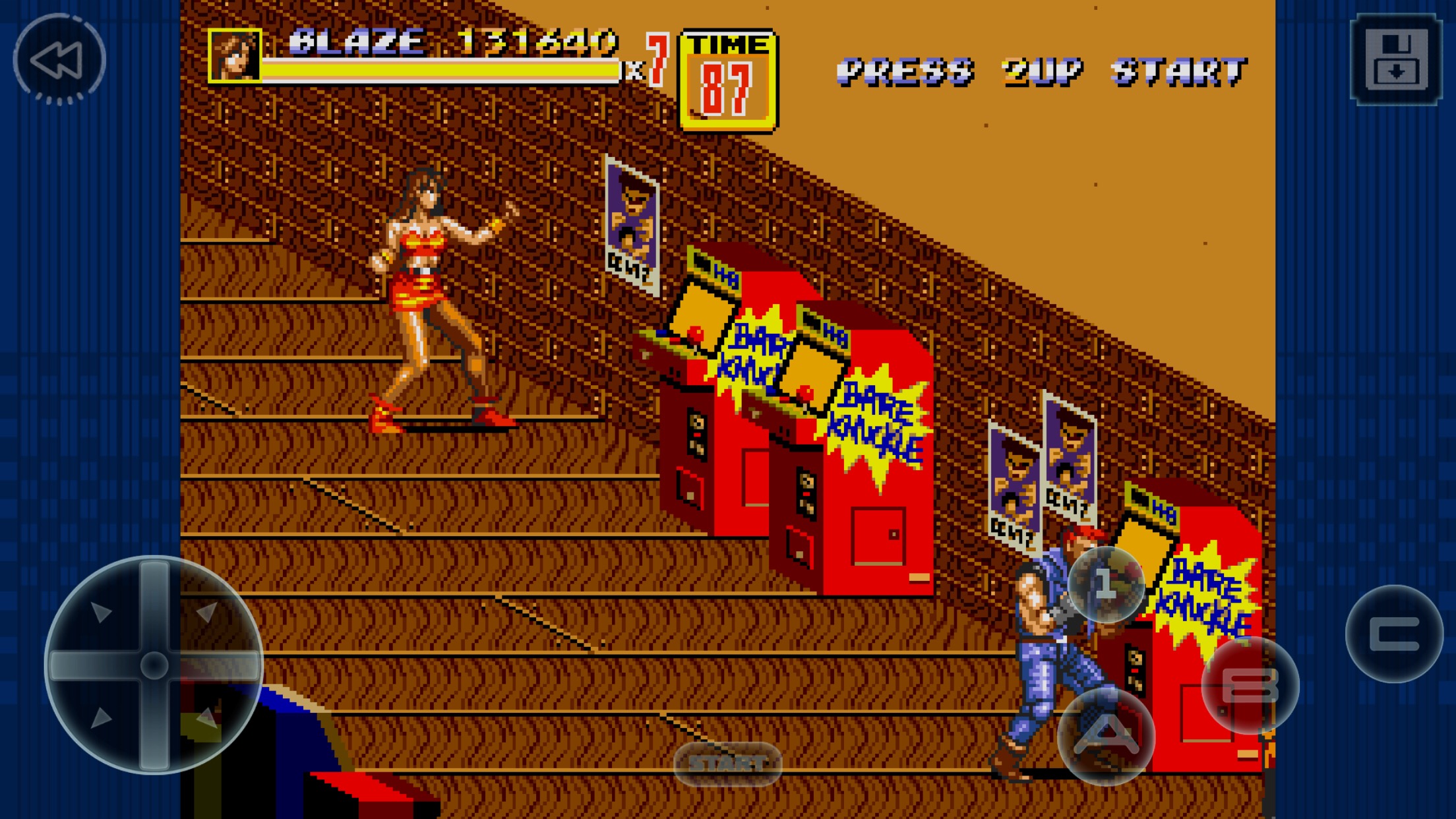 The wild card here is not the game. Of course Streets of Rage 2 is great. You can easily find gobs of people who will tell you at great length why. The reason I’m writing this review is because Streets of Rage 2 and Genesis emulation are not always best friends, particularly when it’s coming from SEGA itself. To say the company has had a spotty history with emulation of its most famous console would be understating the case. For every time it gets things right (such as the M2-developed SEGA 3D Archives on the Nintendo 3DS), you can probably find two or three cases where it misses the mark (the various mega-collections of Genesis games come to mind here). And in recent history, the most embarrassing instance of the latter came with the launch of SEGA Forever, SEGA’s attempt to bring its classics back to mobile gamers.

The emulation of the Genesis titles released at the launch of SEGA Forever was sub-par to say the least, with poor framerates and messed-up sound emulation. The games also lacked a lot of the options players might have expected, like the ability to arrange the virtual buttons as they like, display options, or filters. This weak showing didn’t go unnoticed, and for a few minutes it felt like the entire hobby from top to bottom was chewing SEGA out. Everyone moved along to the next thing before long, and SEGA, somewhat surprisingly, got back to work. With each new release, the SEGA Forever Genesis emulator got a little bit better and more fully-fleshed out. First came performance improvements. Then online multiplayer. Then control options, and display options, and even the ability to choose your preferred region in certain games. Even the frequent bugbear of Genesis emulation, the audio, saw steady improvements. And if you’re looking to test the latter, there is perhaps no greater trial by fire than Streets of Rage 2. 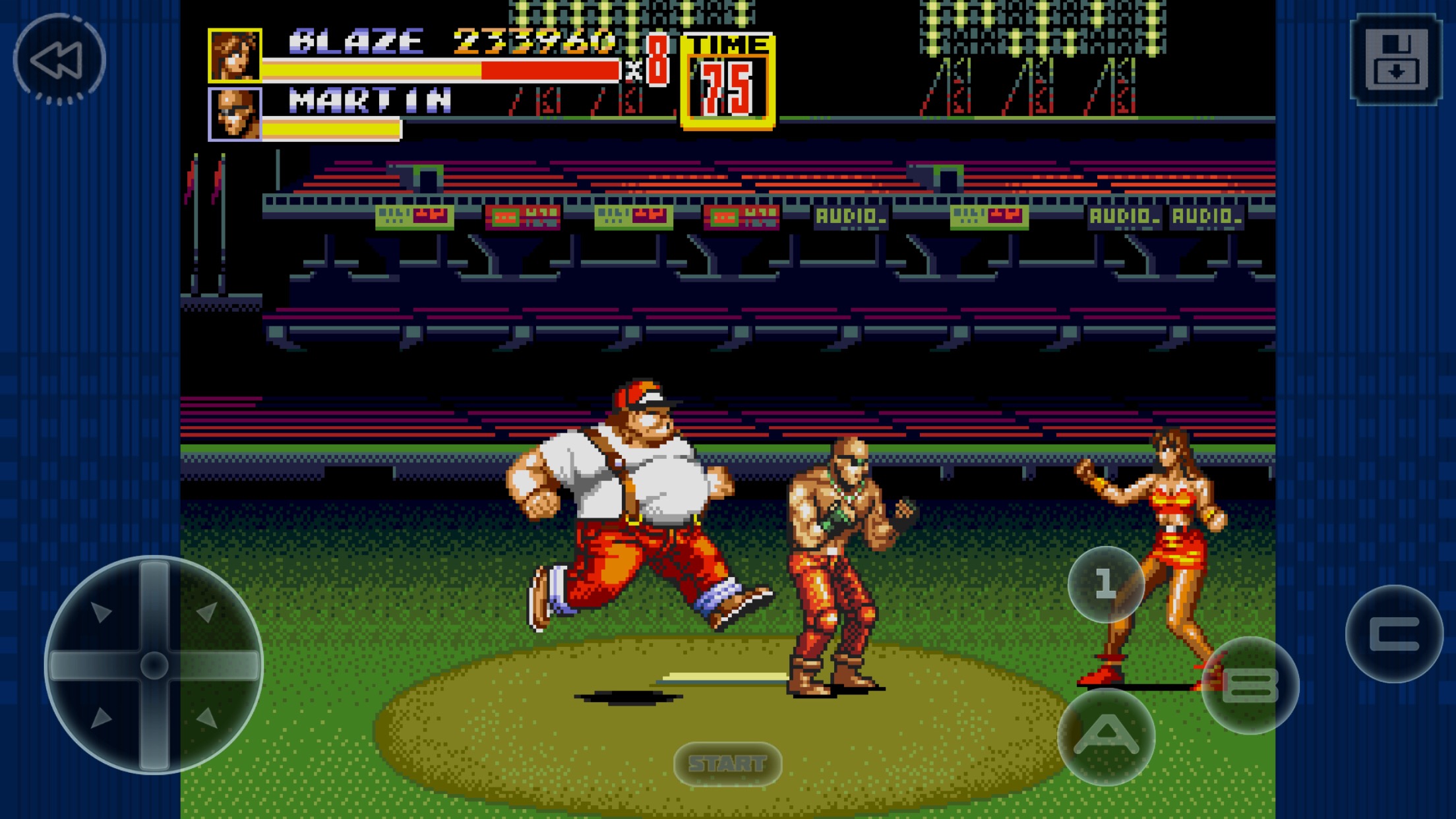 Besides being a great game, Streets of Rage 2‘s other claim to fame is its incredible techno soundtrack. Composed by dynamo Yuzo Koshiro, the game’s music represents the coming together of a genius in his prime and a sound chip that offered tremendous rewards to those who knew what to do with it. There are a lot of great soundtracks on the Genesis, but no one could make its sound chip sing quite the way Koshiro could, and Streets of Rage 2 is proof of that. As such, if you want to see just how well any given emulator is handling the system’s audio, all you need to do is give Streets of Rage 2 a spin. SEGA is probably just as aware of this as anyone, so I have to believe that the team behind SEGA Forever wanted to do this one right.

As I often do when it comes to these mobile ports, I busted out several other versions of the game that I already own for comparison. The results? Friends, SEGA did pretty well here. It’s not perfect, of course. A couple of the instruments sound a little off, and the levels of some of the instruments aren’t exactly right, but overall, this is one of the better official swings at it that I’ve seen from anyone other than M2. Compared to the old version we had on iOS, it’s like night and day. Sure, it would be better if SEGA had gotten this right from the start, but I think there’s a lot to be said for acknowledging a mistake and making an effort to improve. And this does indeed represent a major improvement for the SEGA Forever Genesis emulator. 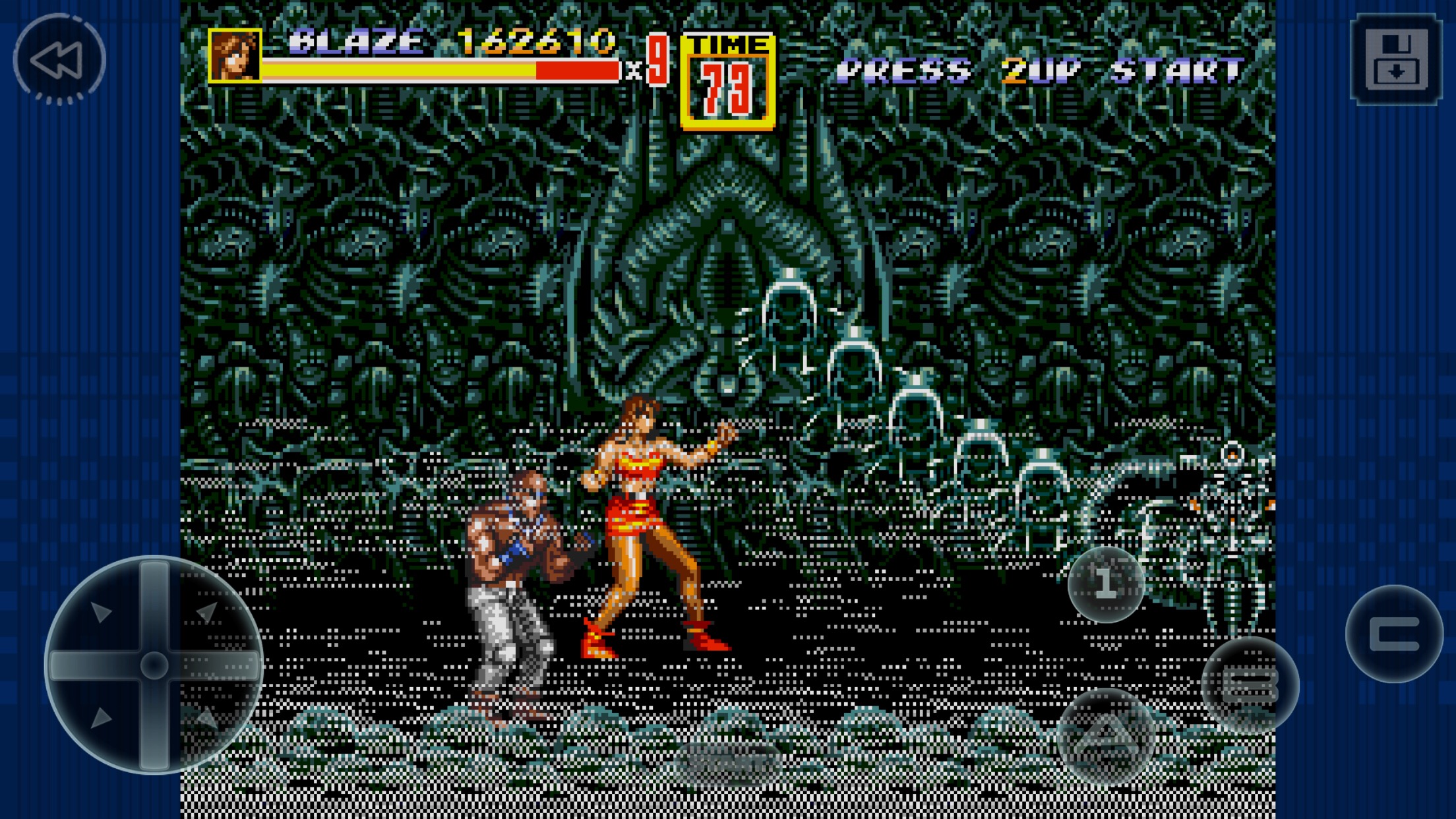 It’s not all joy in SEGA-ville, however. There remains one problem that has been here from the start and seems to persist no matter how much the developer improves things. Streets of Rage 2, like pretty much every other SEGA Forever release, just can’t seem to run smoothly 100% of the time. While you’re playing, you’ll notice occasional hitches and bits of lag that just aren’t there in other versions, and while it’s quite minor in this particular game, it’s noticeable. Things seem to run smoother when you switch your device into airplane mode, but that’s only possible if you buy the IAP and even then will prevent you from making use of the save state feature. It’s probably not a deal-breaker for most and I again have to stress that this is still considerably better than the old iOS version, but it’s something to keep in mind.

Apart from that, the game looks and plays well, offering many of the options that have become standard in the SEGA Forever line-up such as MFi controller support, save states, control re-mapping, online multiplayer, and visual filters. Unfortunately, you’re not able to select which region’s version you want to play as you can in some other recent SEGA Forever releases. It’s not a huge issue here as the differences amount to a couple of changed graphical details, but I certainly hope that should Streets of Rage 3 ever join this line-up, the superior Japanese version will be among the options. 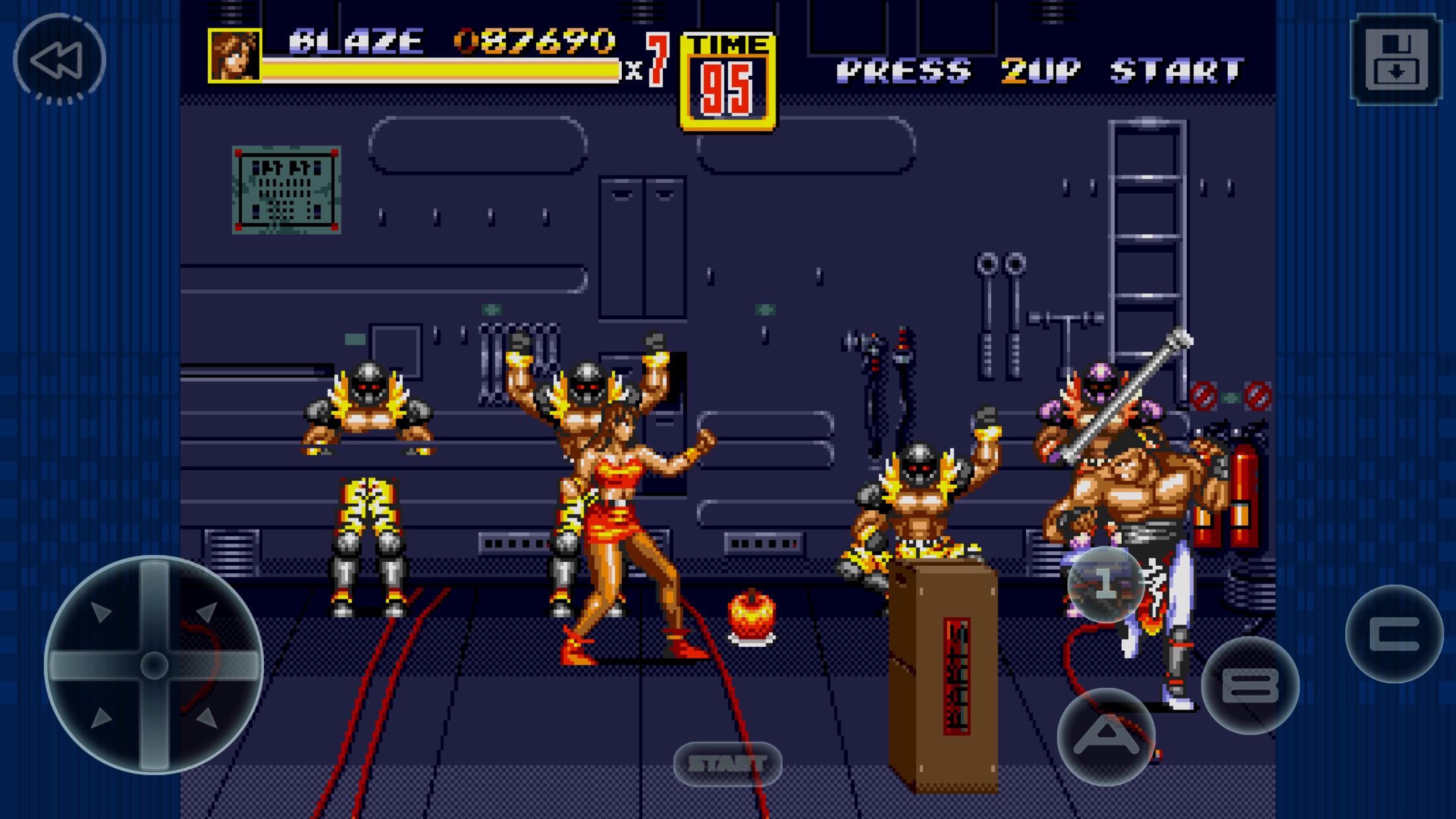 Following in the footsteps of the SEGA Forever release of the first game, Streets of Rage 2 allows you to watch ads in exchange for a couple of cheats. In this case, you can add extra lives or swap out your character mid-session. In a very nice touch, SEGA has added an extra button to the layout that allows you to automatically perform a rear attack, something that proved tricky in the past with touch-based virtual controls. The game is free to play with ad support, and a single IAP will remove the mandatory non-SEGA ads while enabling certain features. Those who owned the previous version should be able to unlock the ad-removing IAP by restoring purchases.

All in all, it’s a more solid version of SEGA’s classic brawler than I had expected we’d see on mobile, and certainly worth grabbing and spending some time with. Is it perfect? No, but let’s not make perfect the enemy of good here. Its visuals, audio, and gameplay put it at the head of the pack when it comes to mobile beat-em-ups, and even if a few hiccups here and there stop it from being exactly the way you might remember it, I think it’s nevertheless something you should have on your mobile device if you enjoy action games.