The concept of matching colored tiles is far from a new one in the App Store, and if you’ve even had the shortest of looks through the Puzzle category, you’ve no doubt come across plenty of games that look like Troisix ($1.99), at least visually. Multi-colored tiles layered across a screen that ultimately requires matching against one another. It’s puzzle game 101 at this point, so creating something that is a little bit different, yet immediately familiar is no mean feat at all. That’s what Troisix developer Gwenn Guihal has been able to do, and it’s amazingly charming with it, too.

If that name sounds familiar, it should. Guihal was also the developer behind YesSir, a game we enjoyed back in 2014. He’s back, and this time with a puzzle game that’s altogether more colorful than the decidedly dark look of YesSir. 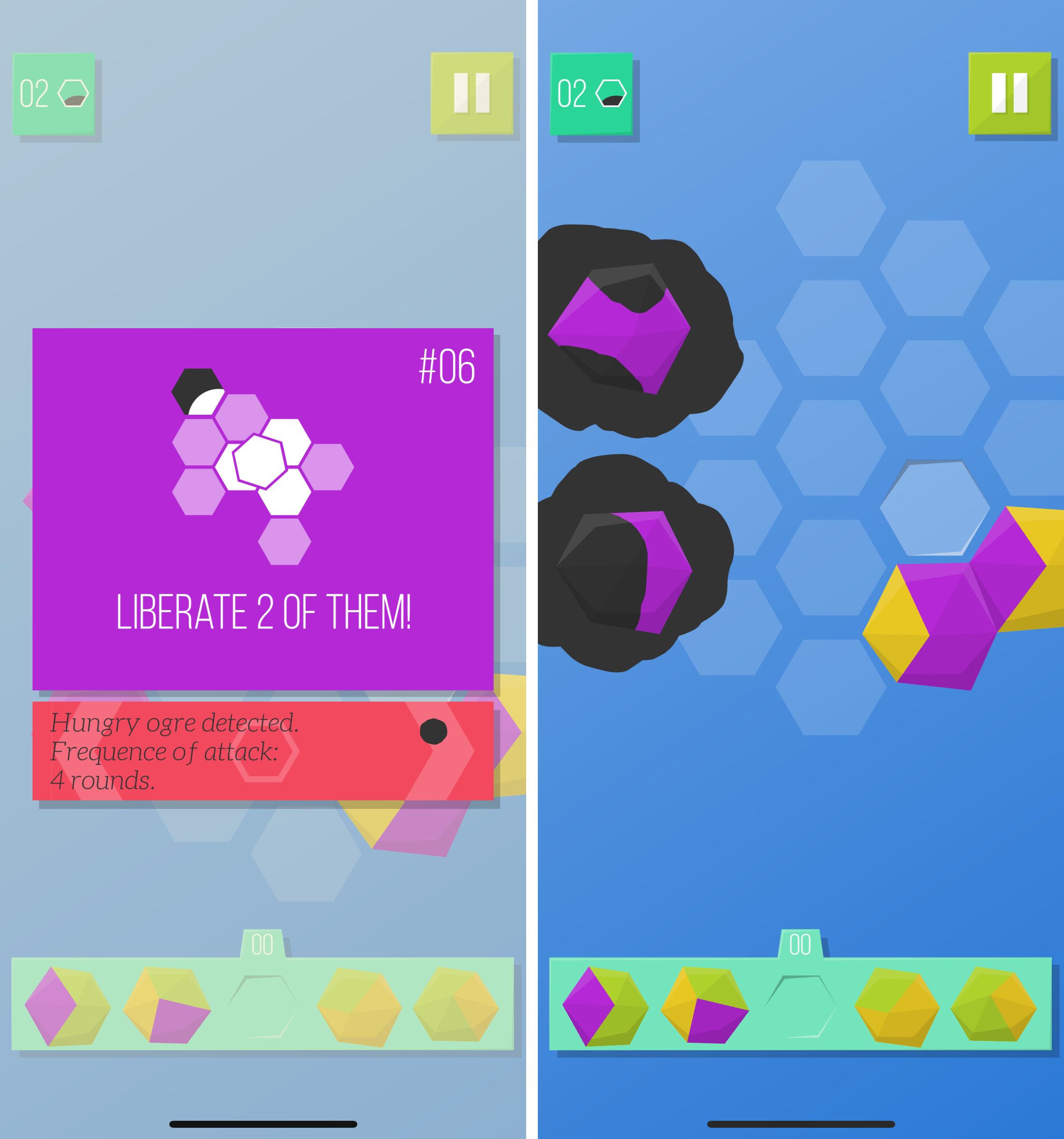 A puzzle game through and through, Troisix is based on the Chromino board game, and it’s easy to see how. Chromino relies on players matching colored tiles, just like Troisix, but a few things were added to the iOS game in order to make it more suited to playing alone. The rectangles of Chromino have been replaced by hexagons, while the rules have also received a refresh as well. The biggest change is the inclusion of the hungry ogre, a villain that you don’t really see, so much as experience the effects of. Apparently based on Venom, the ogre goes around claiming previously colorful tiles for himself, turning them black in the process. That’s obviously not good for you or your tiles and makes for a great variation on the standard tile-matching genre. The inclusion of the ogre us what makes the game so different and elevates it above the standard tile-matching fare that fills the App Store.

When playing through the 44 levels gamers will face one of four different gameplay modes;

The difference in the gameplay modes means the game doesn’t get repetitive and if you’re of a nervous disposition, those timed levels will have you sweating, trust me!

Ultimately, no matter which level you are playing, the aim of the game is to place tiles so that at least two of their sides touch other tiles with matching colors. That obviously means that not all tiles can be placed in all positions, but some can be placed in multiple locations. It’s here where Troisix can become very complicated, very quickly. You start with a limited number of tiles in hand, but as the game progresses, that can increase to as many as 50 tiles at once. Deciding which of those tiles to place where can be the difference between a successful level and the hungry ogre taking over. It’s here that the real complexity kicks in and will have you coming back for more, no matter how many times you find yourself failing.

It’s also refreshing to play a game these days with no in-app purchases to speak of. Gamers hand over their $1.99 and get one fresh copy of Troisix in return. With support for English and French localization and iPhone and iPad screen sizes, this is a game that was originally intended to take around six months to develop, only for that to stretch to three years. If you want to recognize the hard work that went into creating a game as charming and as fun as Troisix, I heartily suggest you check this out. You’ll download many less deserving games this month, believe me.