One of the best ways you can support TouchArcade is by doing your Amazon shopping through a TouchArcade affiliate link. We’ve set up the easy to remember toucharcade.com/amazon too if you want to type that in or bookmark it. We get a small percentage of anything you buy through any of these links, which otherwise would just go to financing Jeff Bezos’s robot St. Bernard army or whatever else he’s up to now, and it goes a long way to supporting the site at no additional cost to you. These Amazon Items of the Day articles are all products we have used ourselves, and feel are things that the TouchArcade audience might be interested in! 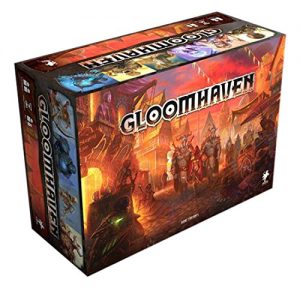 My local tabletop gaming Facebook group is absolutely losing it this morning over Gloomhaven being on sale today on Amazon for $103.37 down from its regular price of $140. Admittedly, I’m not as deep into the world of board games as I once was, but according to friends of mine, Gloomhaven is a lot like Space Hulk (and many other similar games) that are impossible to find and rarely sell for anywhere near the original retail price. I only even know one person who owns a copy of Gloomhaven, and when he brings it to the local game store, it’s a thing. If you’ve never heard of this before, the reason it’s a big deal is because it’s the #1 game, overall, on Board Game Geek, as well as the #1 thematic and #1 strategy game- Likely because Gloomhaven is not only unbelievably complicated, but also features a single player mode.

Take a look at this quick video to get an idea of what the game is all about:

The staggering thing about Gloomhaven is the absolutely unbelievable content in the box. It’s really hard to quantify this in any meaningful way if you’ve never played it before, but the box weighs 20 pounds. What other game have you played in your entire life that requires 20 friggin’ pounds of boards, booklets, cards, pieces, and other gizmos to play? Here’s a review by The Dice Tower, which is my favorite board game channel:

Now, the one odd thing about Gloomhaven is amongst those 20 pounds of pieces is a lot of various stickers which are applied on maps, cards, and all sorts of other places as you play. These stickers aren’t removable, which seems like a real odd oversight unless I’m missing something. (I’ve only every watched this being played at my FLGS.) It’s recommended that you pick up this removable sticker set, I asked my buddy who owns the game what the deal is with the few negative Amazon reviews, and his response was effectively, “I have no idea, mine are great."

Gloomhaven is currently out of stock on Amazon, but they’ll ship whenever they get more which … hopefully is quickly. Either way, if you’re even remotely interested in board games, this is the crown jewel of any board game collection. Also, if you’re thinking ahead for Christmas gifts, if you have any board gamer significant others I’m fairly certain they’ll absolutely lose it if they open up a copy of Gloomhaven.

UPDATE: Ugh, looks like this deal lasted an annoyingly short period of time. While the normal price of $139.99 isn’t on sale, it still might be a decent “deal" as this game has absurd resale prices. Looking at what resellers are charging on Amazon isn’t anywhere near $139.99, which makes me wonder if it wasn’t resellers that scooped them all up?

Thanks for checking out today’s Amazon Item of the Day, and as mentioned before, even if you’re not interested in this particular product, buying things from Amazon by first visiting toucharcade.com/amazon is immensely helpful in supporting the site at no additional cost to you. Additionally, if you’re ever thinking of signing up for any Amazon services, we’d really appreciate if if you’d do it through these links:

If you want to take things a step further, you can check out our Patreon, but either way we just appreciate you sticking with us and continuing to both visit and contribute to the TouchArcade community over the years! If you’ve got a product you’re interested in seeing featured in an Amazon Item of the Day, don’t hesitate to reach out. The best way to get in contact with us is via email at [email protected] and be sure to include “Amazon Item of the Day" in the subject.