Welcome to your SwitchArcade Roundup for September 14th, 2018. Phil here to round out this week of roundups (so stick a-“round"). There is SO much to get through in the news today from yesterday’s Nintendo Direct. So much so that I had to take two days to get everything organized, AND so much so that on this rare occasion, I do not have a Game of the Day for you. The news and new releases are much more important this time around. Let’s dive into all this excellent (and decidedly not-so-excellent) news from the Nintendo Direct!

Off the heels of the Pokemon: Let’s Go, Pikachu / Let’s Go, Eevee Switch bundles, a new special edition Switch console has been announced. The special edition Super Smash Bros. Ultimate Switch with full branding on the dock, Joy-Con controllers, and download code of the game will launch on November 2nd. Before you get TOO excited, you won’t actually have early access to playing Super Smash Bros. Ultimate. It’s just like if you pre-loaded the game on your Switch from the eShop. You’ll have to wait with the rest of us for December 7th.

New bundle approaching! This upcoming bundle will include a #NintendoSwitch system, Super #SmashBrosUltimate branded Joy-Con controllers and dock, as well as a download code for the game. Available 11/2. pic.twitter.com/x4tXUngnOk

Like an old friend (who’s particularly ghostly and ghoulish), the Luigi’s Mansion franchise is coming to the Switch with its third installment. Sure, we’ll get a sample of some Luigi’s Mansion haunting action when the Nintendo 3DS port of the original Luigi’s Mansion releases next month, but many of us have waited with bated breath for a third entry. Luigi’s Mansion 3, as it’s tentatively titled, is scheduled to launch in 2019, and it was QUITE the way to kick off yesterday’s Nintendo Direct.

Game Freak reveals a brand-new IP for the Switch: Town

Town is simply a working title for the studio behind Pokemon, Game Freak’s latest project, an extraordinary-looking game that possesses a really nice toon-shaded art style. This Switch game appears to take place entirely in the village of the game. You do battle with encroaching monsters that threaten your humble abode, and get assistance from fellow villagers for when times get tough. Town is exciting not just because it looks promising, but also due to the fact that perhaps this is a taste of what we can expect from next year’s Generation 8 Pokemon games… Makes you wonder about the possibilities, doesn’t it?

Nintendo Switch Online gets into the nitty-gritty of its features

…Or lack thereof. I’m going to editorialize this specific news post, more so than I usually do with others since this is SO backwards–even when compared with the Wii U. It’s never a good sign when it seems like Nintendo put more effort into its promotional overview trailer for the service than its actual online service. Yes, you can have cloud saves for most of your games (except games like Splatoon 2, which if I had interest in still playing that game, I’d be rather ticked to lose my rank and all my gear from over a year of playing…), and, yes, at least you can play on dedicated servers… Oh. It’s still P2P? Good luck with this, Nintendo. Cute overview, though. For answers to most questions you might have regarding Nintendo Switch Online, take a look at the FAQ on Nintendo’s website. And, no, there isn’t any “What the heck are you thinking, Nintendo?" question listed in the FAQ.

As stated in the overview trailer and by Nintendo countless times leading up to Nintendo Switch Online’s launch, those who subscribe to the service will have 20 NES games readily available to them, some even offering online play. Such titles include Super Mario Bros., Super Mario Bros. 3, The Legend of Zelda, Donkey Kong, Gradius, River City Ransom, Double Dragon, Tecmo Bowl, Balloon Fight, and Ghost’n Goblins, among many others.

Joining the roster in October is a trio of games: Solomon’s Key, NES Open Tournament Golf, and Super Dodge Ball. November will see the launches of Metroid, Mighty Bomb Jack, and TwinBee. To wrap up the year, December has a lineup of Wario’s Woods, Ninja Gaiden, and Adventures of Lolo.
To see the full calendar and roster of NES games launching for Switch Online account holders, check out this link.

What do you think about lineup so far?

Not one, not two, not three, not four, not five (is he really going to count this all out?), not six, not seven, but eight Final Fantasy games are coming to the Switch–all but two of them have been never-before-released on a Nintendo system. These games include remasters of two previous Nintendo Final Fantasy games with Final Fantasy Crystal Chronicles Remastered and Chocobo’s Mystery Dungeon, Every Buddy! (formerly the Wii-exclusive Final Fantasy Fables: Chocobo’s Dungeon). The latter includes co-op play for up to two friends, a new feature for the game.

What’s new in The World Ends With You: Final Remix? Look no further! 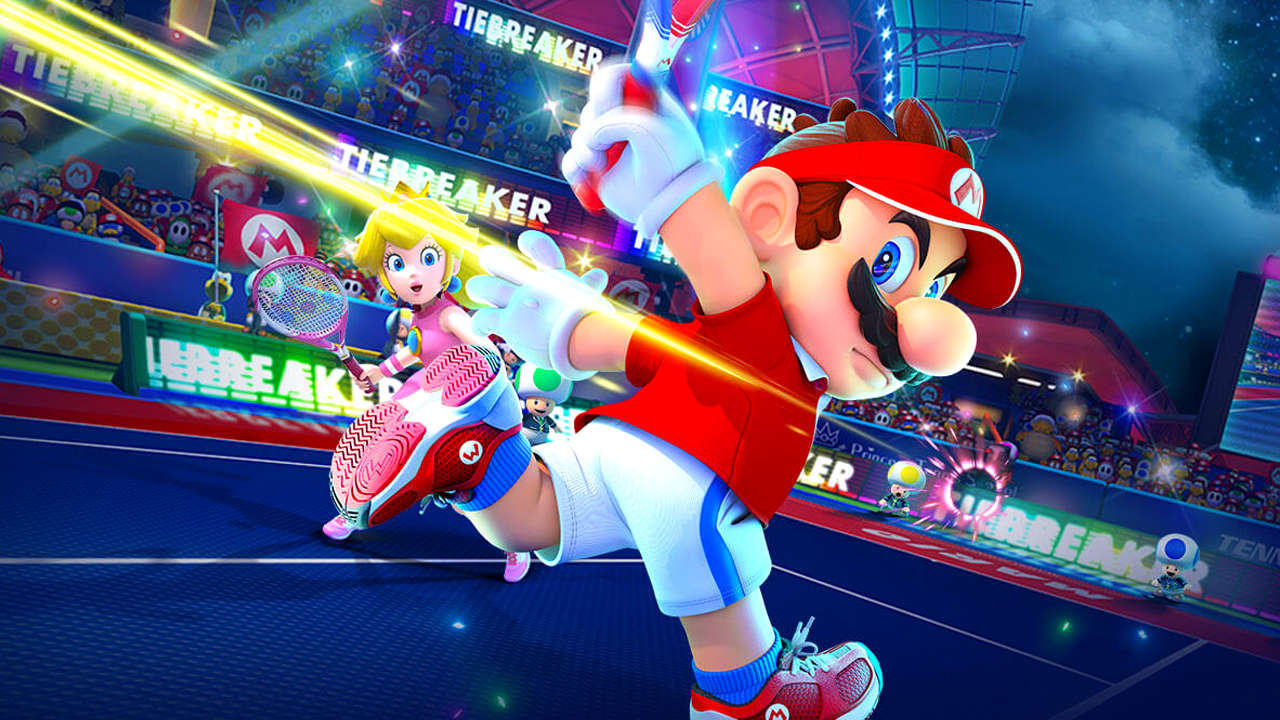 During yesterday’s Nintendo Direct, some Mario Tennis Aces update information presented itself: Version 2.0. This version plans to add four new characters to the roster, unlocked via online play: Birdo, Shy Guy, Koopa Paratroopa, and Petey Piranha. Additionally, a new mode called Co-Op Challenge seems similar Mario Kart Wii‘s online mission mode, but instead of completing missions alone, you’re doing so with other players (and of course in tennis-style challenges). Each of the online missions will only be available for a limited time, each offering a new character outfit or recolor for participating and completing them successfully. Mario Tennis Aces Version 2.0 launches on September 19th.

Devolver Digital has revealed that the mobile gaming success story Downwell is getting ported to the Switch. The original announcement came unexpectedly in the Japanese Nintendo Direct. To alleviate any concerns for purists of the original game, Devolver has made it clear through Twitter that players will be able to enjoy Downwell in TATE mode via holding the Switch vertically. With how much acclaim the game has seen and how much it has just blown up online, it’s quite the treat to have this mobile treasure on the Switch–regardless of there being no release date as of yet.

Not too many new releases on the SwitchArcade Roundup are solely available physically, but obviously with a game like Nintendo Labo: Toy-Con 03 – Vehicle Kit (yep, that’s STILL a mouthful), part of the fun and the experience is the actual building of the cardboard controllers used for the game. From making a steering wheel with a fully functioning pedal for your car, to building a flight stick for your plane, the Vehicle Kit allows for some truly crafty creations. The added bonus of the actual game being much more in-depth than the initial batch of Nintendo Labo kits makes the Vehicle Kit one that I’m seriously considering getting.

This is the type of game I struggled with on my iPhone (well, the original Pocket Edition, mind), mostly due to it being an older model iPhone with its own issues, but also due to not being able to fully come to grips with the touch-based controls. I now look forward to being able to play with my preferred method of input for these types of games–analog controls. For those of you who might only own a Switch, now you can finally see what the buzz around Final Fantasy XV is all about–albeit a more streamlined, quasi-Cliff notes version of Final Fantasy XV. Final Fantasy XV Pocket Edition HD is available today, and it’s currently discounted until September 20th for its launch. A 40% discount? Niiiiiiiice.

We built this city. We built this city on Nin-ten-do!!! Maybe it doesn’t have the same elegance to its as Starship’s original song, but I like my lyrics just as well. In a surprise announcement, the critically acclaimed city-building simulator Cities: Skylines has arrived on the Nintendo eShop as of yesterday, allowing Switch owners the opportunity to create and manage their own virtual metropolises. While the Nintendo Direct did not show a pleasant frame-rate for the game, it seems performance is dependent on whether you’re playing docked or in handheld form–the latter might actually run better apparently!

Bastion is no stranger to consoles, handhelds, and mobile devices. If there is a recent platform to be ported on, you can bet that the critically acclaimed, terrific-selling Bastion is coming to it. Now, for the very first time a Nintendo system sees the launch of Bastion with yesterday’s release of the Switch version of the game. If you can believe it, this is actually my first time playing through this action-intensive dungeon crawler, so if you folks are interested in a newcomer’s perspective on Bastion–specifically the Nintendo Switch build–then you’ll get just that this Monday!

Hopefully any prospective surgeons are steering clear of Surgeon Simulator CPR. For some reason–and I just have an inkling about this–I believe that using a sledgehammer is NOT the proper medical procedure to resuscitate a failing heart. That said, I’m not a licensed doctor, so I probably shouldn’t be speaking out of turn on this subject. So, while it may or may not be proper medical procedure, you can bet your butt that it’s sure as hell fun to do! With the addition to Joy-Con gyro movement, you can really get into your work. Surgeon Simulator CPR currently has a week-long launch discount.

Wasteland 2 didn’t run that well on the PlayStation 4 or Xbox One. You could say it was a bit of a performance… wait for it… wasteland. (Hey! Who threw that rotten tomato at me!?) That said, the well-received, turn-based tactical gameplay of Wasteland 2: Director’s Cut might just be worth soldiering through any performance issues that might arise in this Nintendo Switch port.

As someone once said, “parting is such sweet sorrow." That is, unless we both know that we’ll be seeing each other again real soon–like, early next week soon! Until then, I always love to read your comments on news stories and subjects posted on the SwitchArcade Roundup, and I’m quite interested in your thoughts on Nintendo Switch Online. Will you be subscribing to the service?

As I always end the SwitchArcade Roundups, keep your Joy-Cons charged and your Switches loaded with great games! See you on Monday!