Spry Fox surprised us all when it released Alphabear 2 (Free) last week. It’s the follow-up to 2015’s Alphabear (Free), which was highly praised and with good reason. I remember laughing heartily at the little images to come from it, with bears in funny clothes saying funny things. But can the sequel possibly stand up to the joy felt with the original in hand? In short, absolutely! It is everything good about the first, with a very clever story to boot.

Before beginning the game, you need to select your base bear. All of your favourite bear categories are covered: Black! Brown! Panda! Polar! After choosing the bear, you can randomize its outfits until you’re happy. My polar bear began life decked out in green jeans, rainbow suspenders, and a burgundy beret.

Everything revolves around time, thanks to a time machine that rather unfortunately resembles a refrigerator and a very hungry bear (in this case, my beret-bearing polar bear). At first glance, the narrative in Alphabear 2 is a riff on Back to the Future. I’m not a huge fan of time traveling films, as they tend to leave me on the border of confusion and an existential crisis. But I have seen the first two Back to the Future movies, and did learn something very interesting recently: the DeLorean in the film was originally supposed to be a fridge. The filmmakers changed it to a car in fear that a ripple effect of children being locked into fridges would be started. That’s right: Spry Fox borrowed the original plot and made it into a new narrative poking fun at Back to the Future. It’s ingenious, really.

So by entering the time machine, your bear of course manages to destroy the future. You’ll have to travel back through different eras to find historic figures and rediscover words along the way to – you guessed it! – rewrite history. Your bear and the professor meet other bears along the way, and continue to make Back to the Future jokes (“Onward to the past!").

The story is linear, following a very familiar buttons-in-a-line route that games such as Candy Crush helped make infamous in the free-to-play mobile market. There are several worlds, each with its own boss to battle after you spell your way through dozens of levels. You cannot return to past levels at first, but eventually you earn your way back in hard or master versions of those normal levels you’ve completed. I do wish I had the ability to go back, especially in order to use bears and earn items when I cannot currently proceed further down the story line. 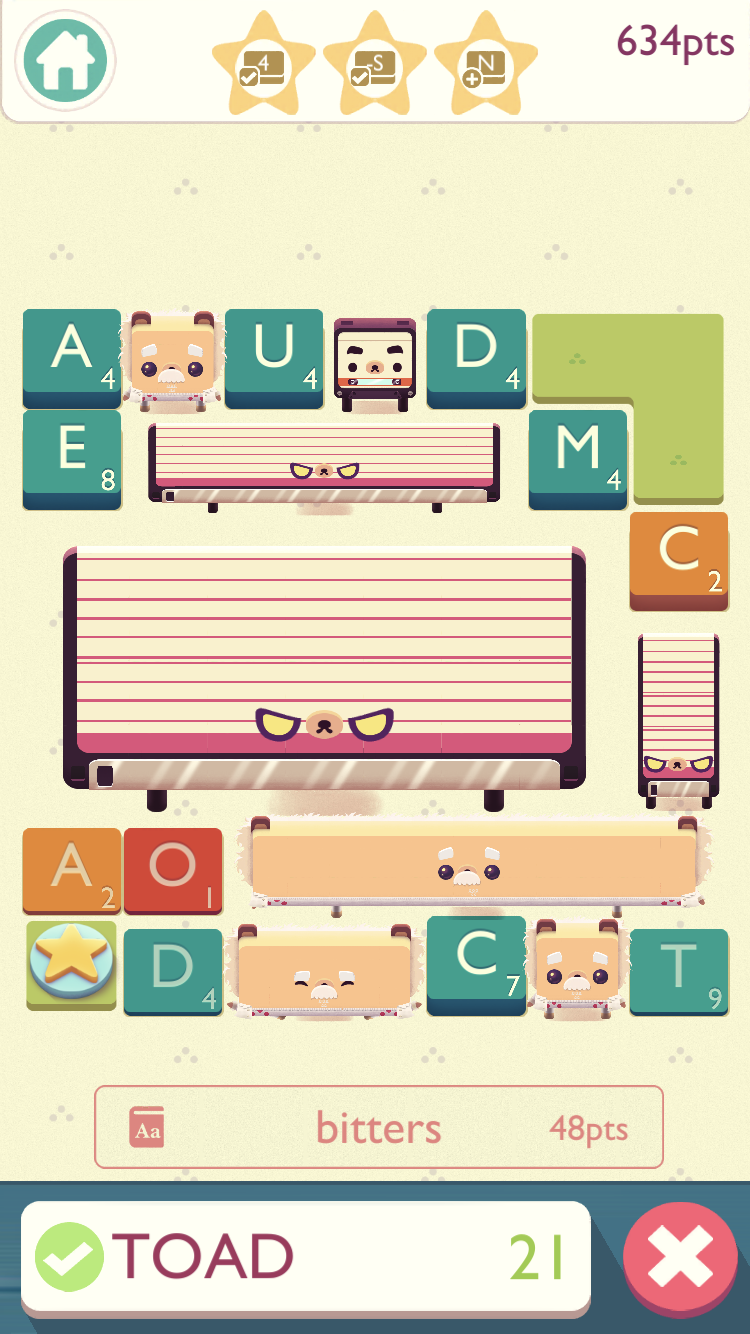 Gameplay hasn’t changed much since the original Alphabear. Before each level begins, you’re able to choose from your collected bears to assist you during each story level. Some levels recommend certain types of bears, but it’s always up to you to make the final decision. Each bear will do something different in the level, such as give extra turns to specific letters or hints for what to spell.

You have a limited amount of honey (energy) to spend playing in story mode; the energy refreshes on its own over time, or by throwing some of Alphabear 2‘s premium currency at it. Each level starts with a bear (or multiple bears) surrounded by letter tiles. Most matches only have countdowns on the time left on letter tiles, but some do have a time limit as well. Remove the tiles by spelling words, and bears will grow to fill the spaces left behind. In an ideal world, you will clear all the tiles and create one giant bear, but that’s often just a pipe dream thanks to the tiles that have move countdowns until each turns into rock… and bears can’t grow through rocks! Bigger bears are worth more points, and clearing the board will earn you colored cloth to help craft clothing.

You can stop a level when you hit the target score, or continue on to try and make the biggest bear possible. For a perfectionist and completionist such as myself, I’ll rarely quit early because I want to know what I am capable of. If you’re struggling to hit the score at all, you can check your boost inventory to see if something helps; boosts are earned as rewards throughout the game, and are a lifesaver when you just can’t get past that one level. We’ve all been there! Having a +5% score or +10 second time limit can make a world of difference. 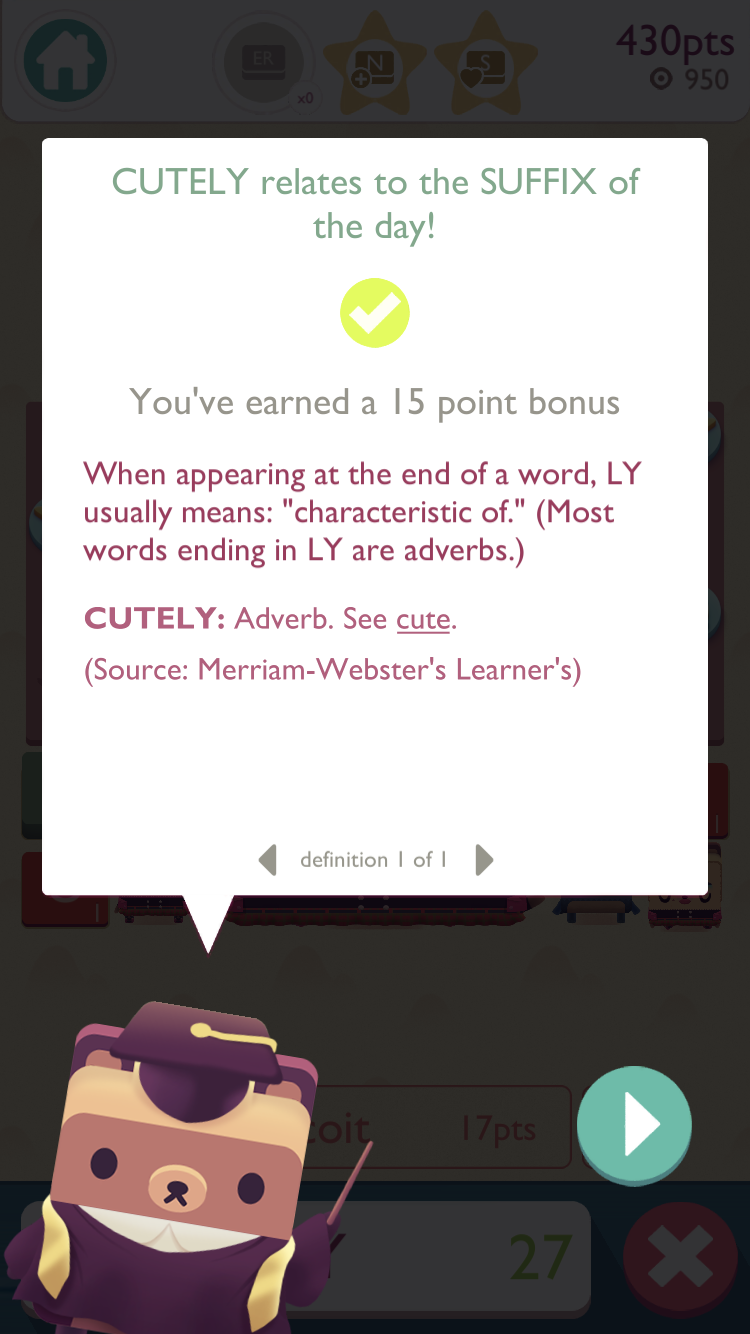 Another way to boost your score is to pay attention to the “ix" of the day. Use it correctly, and you’ll earn bonus points. For example, if “re" is the prefix of the day, “redo" would earn bonus points but “ore" would not. It forces you to look at the letters differently than you were before, which can spark an idea. The game really does well at balancing difficulty and progression, and provides a lot of opportunity to help get past any walls you may find yourself up against.

After a level is complete, one of the best parts of Alphabear 2 occurs: the photo booth! These amusing little scenes can be shared across social media, making the game slightly interactive. In the photos, your bear will appear in a randomized pose, saying Mad Lib-type phrases using words from the level. It’s easy to lose yourself by scrolling through these images, one after the other, saving or sharing the great ones as you go. I have an embarrassing amount of them at this point.

The amount of replay value in Alphabear 2 is overwhelming at first; luckily, not all sections of the game are available at the beginning, making it an easy curve to follow until all the content is accessible. The main screen contains special events, TV time, Time Warps, Daily Events, Bear School, and the game’s meat and potatoes – Story Mode.

The Daily Events section is cleverly set up as clocks. At first, only a few are available, but as is the theme, you’ll unlock more as you go. Each clock will offer a different challenge daily, such as competing a small board or a lovely leisurely no-time board. Some clocks are only available on certain days; for example, on Sundays you’ll get a notification stating, “It’s Sunday Fun-Day! Fix the Sunday clock to win coins!" It’s another successful tactic to bring you back to your bears on a daily basis.

At some point in the Story Mode, you’ll get to a level that your bears may need to be upgraded to complete. This is where two more of the modes come into play, Time Warps and Bear School. Time Warps send bears through time in one of three time machines. One uses coins (the best but most rare), one uses berries (it is so-so), and the last is free (you can click on it after a set time but the bears are quite common). Duplicate bears level up bears that you own, or new bears join your collection. Or is it a bear party? I definitely like to think of my bears as a collection of RPG characters I can choose to join my party.

Bear School sets out levels to beat to increase the stats on any bear matching the daily types (cautious, merry, etc). The first level per day will cost coins, but after that you’ll need coffee to keep working forward. There are two options, levelling up instantly (one level) or winning a timed event to earn one to three levels and the chance at some goodies (berries and cloth). It’s nice to have the option of just quickly getting it done for a little reward or taking the time and risking the bigger reward.

Collecting cloth for clothing seems to take forever, although I seem to have expensive taste for what is available. After three days of on-and-off playing, I have 200 red cloths, 123 yellow cloths, and 30 blue cloths; that means I can craft a cat-filled housecoat (90 yellow cloths) but the hot dog costume (500 yellow cloths) is still far out of my reach. But I must get it. I will get it. I will return every hour until I do. That’s right, this is another part of the game aside from the gameplay that keeps me coming back for more. The world needs to see my bear saying funny things while dressed like a hot dog.

Alphabear 2 is a free-to-play title, but you can pay for an ad-free experience if you’re interested. This allows you to permanently have the TV bonuses (such as increased berries or an increased chance at cloth) instead of having to watch ads every few hours. You also get free honey three times per day instead of having to watch three ads to receive it. Otherwise, I never encountered an ad during play, not even between levels.

Something I struggle to appreciate is that you still need to wait for energy refills if you pay for a no-ads bundle. It’s considerably costly to still have to wait for more honey to build up so you can continue. Despite not liking the feature, I do understand that its purpose is to help increase longevity… but as I’ve stated repeatedly, the game has already succeeded at creating a desire to return, so I wonder if it’s necessary.

Since it’s been so long since Alphabear’s release, and the mobile game landscape moves so quickly, I had actually forgotten that I had played the title before I picked up the sequel and it instantly felt familiar, from the writing to the gameplay. I will never tire of being able to write slightly dirty (or often just very genetically correct) words and getting points for them, so even without the witty bears I often find myself chucking while playing. It’s a great quick reprieve from the stresses of daily life, with reason to return time after time and a great reason to share your progress on social media with the photo booth. The paid No Ad option does seem expensive to still have to wait for honey, but that’s absolutely no deterrent from the title.