Welcome to your SwitchArcade Roundup for August 17th, 2018. It’s your friend Phil here with the day’s news, impressions, new releases, and sales (both new discounts and expiring discounts). The notable news is a bit sparse on this last day of the SwitchArcade Roundup week, so I have some impressions to share of the Monster Hunter Generations Ultimate demo that released yesterday on the Switch eShop to add today. Before that, though, why don’t we check out the Game of the Day? 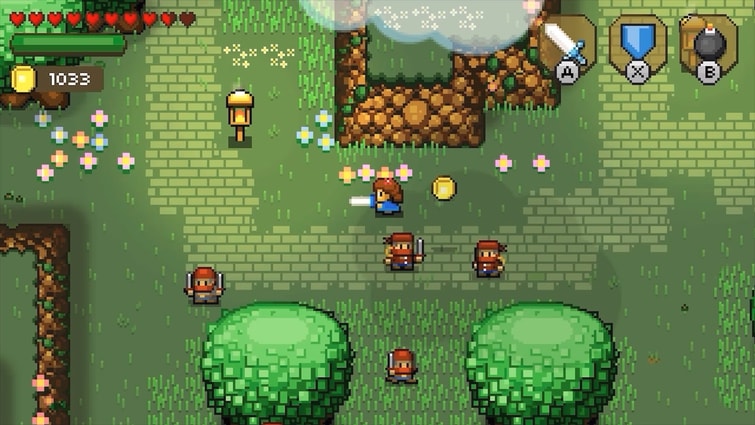 I’ve a soft spot in my heart for The Legend of Zelda series, and apparently, so do many other Switch developers out there because Blossom Tales: The Sleeping King is another game on the platform that takes its inspiration from Nintendo’s illustrious gaming franchise.

Blossom Tales is essentially a 2D Zelda game in everything but name–has similar items like the bow and arrow, bombs, and boomerang, an overworld to explore, dungeon-crawling with puzzles, enemies, and bosses inside them, collecting four pieces of heart to acquire an extra sliver of health, and much more. 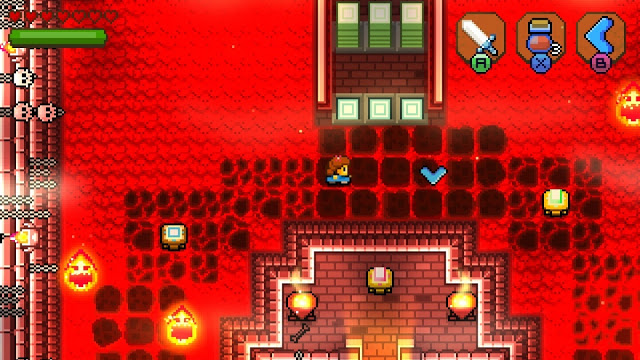 However, the developers give their own interpretation of a Zelda game with a clever storytelling hook–where a grandfather is telling a bedtime story to his two grandchildren. At times during the player’s adventure, the grandchildren will butt in, saying that a part of the story is “too boring", so the grandfather changes it up a little. That, in turn, makes the game modify itself in small ways, such as adding more enemies into a specific fight, or allowing you to choose what type of opponent you want to face, using the grandchildren’s picks as your two choices. These don’t happen too often in the game, which is a shame, as it’s a cute idea that works gameplay-wise. 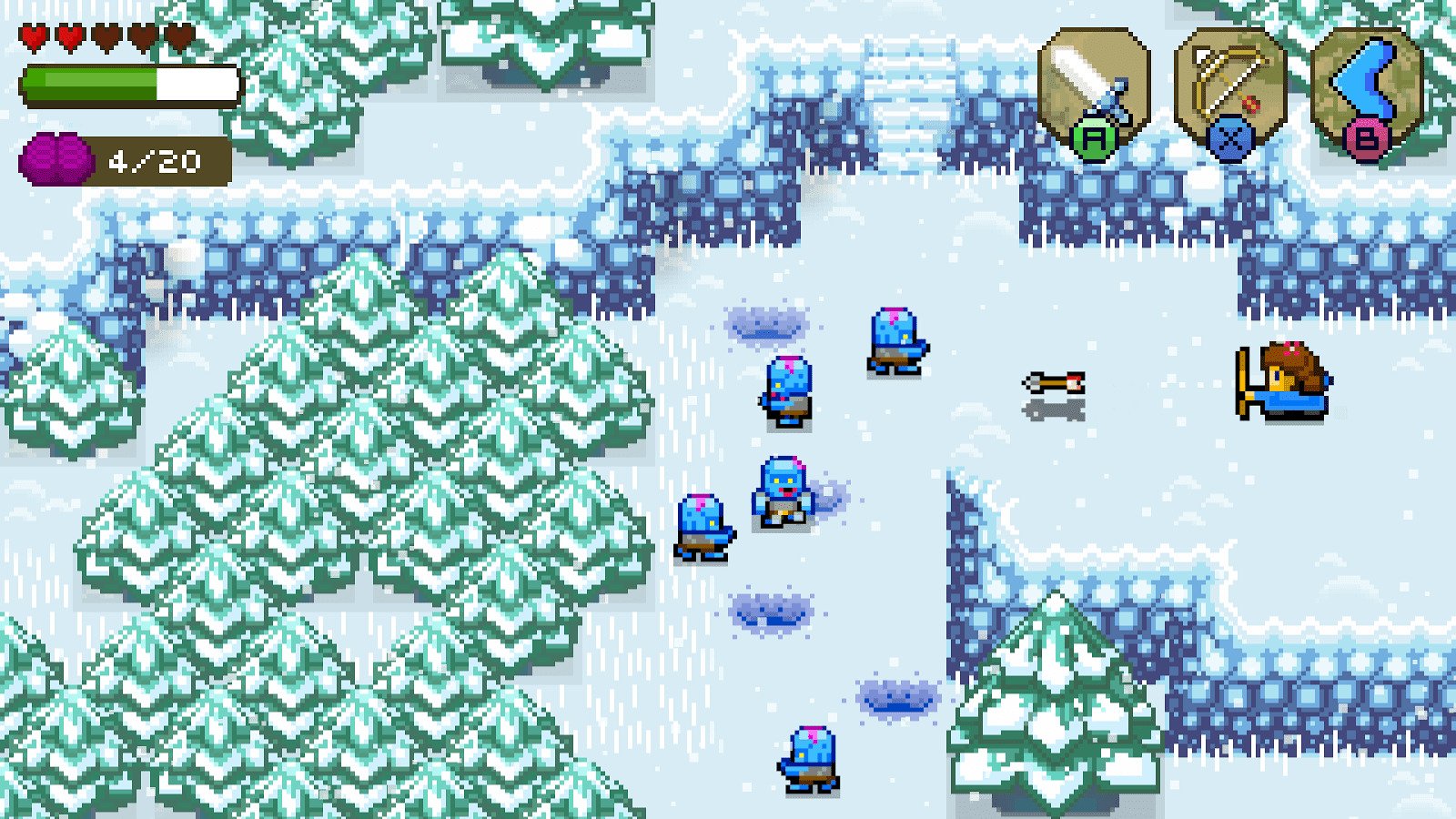 Blossom Tales: The Sleeping King may ape a lot from the Zelda series, most notably from the Super Nintendo’s The Legend of Zelda: A Link to the Past, but there aren’t too many games that are better to take blatant inspiration from. Plus, it succeeds in creating an engrossing adventure that plays well, provides a good deal of riveting exploration, has some clever puzzles to it, and features some really entertaining dungeons to play and battle through.

I didn’t have the luxury of diving into my copy of Monster Hunter World on the PlayStation 4 yet, so I am unfamiliar with the quality of life enhancements made to the Monster Hunter series that might make going back to an old school game of the series like Monster Hunter Generations Ultimate more difficult for fans.

Regardless, what makes the demo, which released yesterday on the Switch eShop, a bit difficult is how it just throws you right into the action without any guidance. There are no tutorials to speak of–it’s just you, a choice of three monsters to hunt, one of fifteen weapons to select, and one of seven or so fighting styles to choose from. That’s all. I know I had trouble at the beginning of the demo just knowing what all of the buttons did. For a long time, I completely forgot how to run and more importantly, just how to use items, which if you’re familiar with how challenging many of the monster hunters are is really good to know how to do.

My experience with the Monster Hunter Generations Ultimate demo had me tackling the beginner mode monster first–a medium-sized raptor-like creature that acted like a Great Jaggi from past games. It would call other raptors when it was in danger, lunge at me and my Felyne companions (the Felynes being a helpful addition to the series as to not make battles so lonely–and better yet, they’re terrific distractions), and would perform its signature move, bouncing on its tail and then darting forward to attack.

Battles in Monster Hunter are ones of endurance. Even when having a 25 minute time limit afforded to you, you can still find yourself panicking to finish off your target monster before the clock runs out and you fail the quest. With no health bar on monsters to determine how close a monster is to death, you have to watch telltale signs like a monster moving slowly, retreating to another area, and drooling profusely from its mouth–all three things I do normally as it is, so what the heck does that say about me!

I played both in single player and in online multiplayer–the latter of which was highly populated, which is hopefully a good sign of things to come with how active the full version will be. No sooner did I try joining a player’s empty room that I was greeted with a “this room is full" response. After a few tries in other rooms, I finally was able to join one. Of course, the player opted to have us fight the hardest monster in the demo, which promptly annihilated us in no time flat.

I tried a number of weapons and play styles, each offering different approaches to take out monsters on hunts. I enjoyed my OG fave, the Great Sword, taking slow but powerful slashes at monsters to take them down relatively quickly. (In Monster Hunter terms for me personally, 12 minutes is relatively quickly.) I also tried out the Bow that I could charge and fire multiple arrows at monsters. There were different types of arrows to work with, from sleep-inducing arrows to strong attack arrows. I think my favorite of what I tried out was the Bowgun, which allowed me to play up close and personal with melee attacks while finishing off with large shotgun-like blasts to my prey.

As someone who isn’t well versed in the Monster Hunter franchise, having only played Tri and its Wii U port, Monster Hunter 4 Ultimate, and a little bit of Freedom Unite on the PlayStation Portable, I find myself excited to play the full version of Generations Ultimate thanks to this demo. I know I’ll be better eased into the game than this demo provided, which basically threw me into the water without swimming lessons or an inner-tube, and I’ll be able to try out more of the weapons and fighting styles in the game, eventually finding my favorite.

Little Dragons Café is a life simulation game that, if the title didn’t already give it away, has you running your own cafe while working with curious and eccentric characters to make it the best cafe it can possibly be. The game comes from the mind of Yasuhiro Wada, the creator of the Harvest Moon series, so the quality of the sim aspects of the game should be rather enjoyable if the original Harvest Moon games are any indication. Little Dragons Café opens up shop on the Switch on August 24th.

Snake Pass is an atypical platformer where you control a snake, bending it, twisting it, and coiling it around objects to survive and reach new areas of levels. It takes quite a bit of getting used to the controls, as there really is no other game like it. Now, this relatively well received game is getting a physical version, something much desired by fans of the game. Super Rare Games will distribute the physical release, the Snake Pass Twitter account has revealed. Hopefully Snake Pass will be slithering into Switch owners’ physical collections sooner rather than later!

You have all been asking for it…

So we are *incredibly* pleased to announce that we have partnered with @SuperRareGames to bring a limited edition physical release of Snake Pass to #NintendoSwitch exclusively from https://t.co/Ew02jYvvri!

From publisher Daedalic Entertainment comes Felix the Reaper, a bloated dude that knows how to move! Your goal is to stick to the shadows in this 3D puzzle game as Felix, who does his deathly duties in order to get close and personal with a maiden that has captured his heart… well, if reapers even HAVE hearts. I didn’t study that subject in college. Felix the Reaper is due out sometime next year. For now, boogie to this trailer that shows off the game’s concept in action:

Stop me if you’ve heard this one before–a first-person shooter with procedurally generated levels. There’s more to Polygod than that, of course, and in all honesty, it looks like a healthy heaping of fun that will keep players engaged and entertained for a good while. Play alone or with a friend, shooting at everything that moves while collecting souls to buy modifiers (or as the game calls them “blessings") for future runs.

Treadnauts presents itself as a multiplayer deathmatch game where the goal is to crush or blow away your opponents’ tanks to smithereens before they get the chance to do the same to yours. These tanks defy gravity by riding upside-down on ceilings, up walls, and hop around like Mario on speed. Treadnauts seems like the type of game that you’ll want to say “tanks for the memories" to with its multiplayer mayhem. With that horrible pun written, let’s quickly move on to the next game.

The Switch seems like the perfect device to sit down and enjoy a point-and-click adventure game. Detective Gallo is one such new release that is in the genre, and it’s notable for having a completely hand-drawn art style that is pleasant to the eyes with voice acting that’s rather pleasant to the ears, as well. The game originally launched on Steam a couple of months ago, and now Detective Gallo is on the case right here on the Switch.

Spend some nights in Persia with Persian Nights: Sands of Wonders from Artifex Mundi. This puzzle-adventure game features gorgeous visuals with delightful landscapes and scenery that your eyes will thank you for letting them gaze at. With a plague affecting the land of Persia being the focal point of the story, it’s up to you to interact with myriad characters and solve plentiful puzzles and complete other challenges to stop said plague from spreading any further. With a $1.50 launch discount to further entice, Persian Nights: Sands of Wonders appears to be a game that would appeal to fans of games like King’s Quest and the like.

We’ve reached the end, so both your SwitchArcade Roundup and your host of the Roundup are taking a little break to enjoy the weekend. Until our return, keep your Joy-Cons charged and your Switches loaded with great games!