Greetings, travelers. Welcome to the first installment of the Hearthstone Tournament Recap, brought to you by the team at Coin Concede: a Hearthstone podcast dedicated to making the competitive side of the game more accessible to you. We’re here to bring you an update on the last week in tournament Hearthstone – and while we’re all very excited for The Boomsday Project to come out in a scant few days, there are still a couple of major tournaments to celebrate the end of the Witchwood meta. Let’s dive right in!

The first year of the HCT Tour Stop circuit is continuing forward in Tokyo, and these officially sponsored near-weekly tournaments are great for keeping tabs on a constantly evolving tournament meta. As a reminder, all HCT events are Conquest format – in this format, both players bring 4 decks from 4 different classes. Before the match, players ban one class from their opponent’s lineup. After that, they must win with each of their decks and they cannot keep playing a deck that has earned a win. This is a typical “Best of 5" format.

The tournament consisted of 16 players who had all placed in the top 4 of qualifiers from months prior. After 3 rounds of group play, our elimination rounds looked like this: 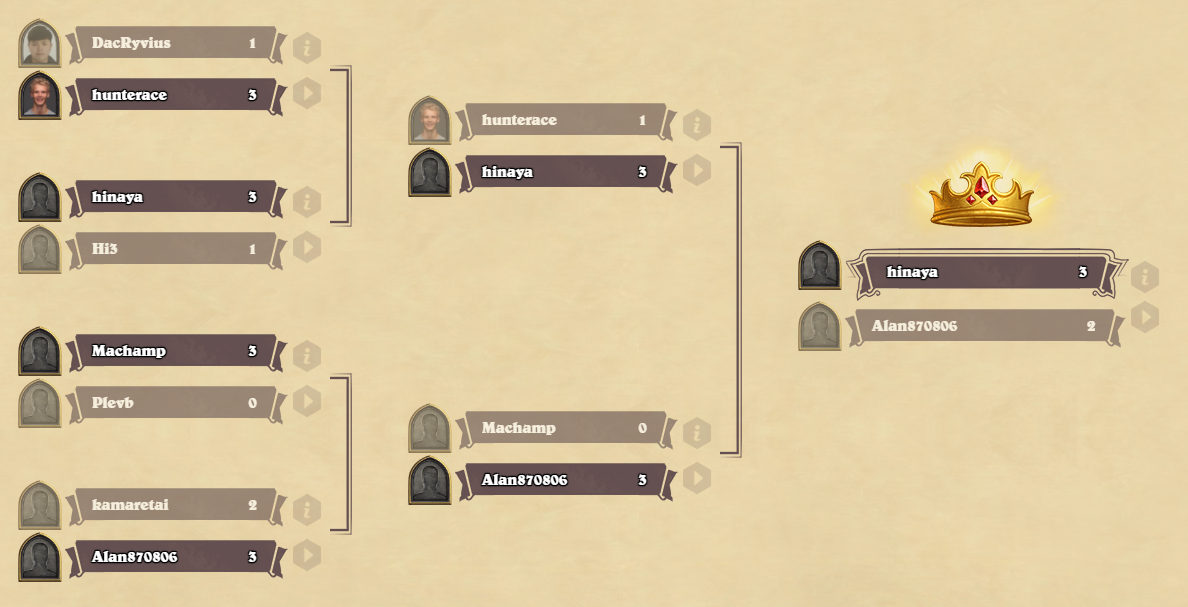 Hinaya ended up taking the tournament as a hometown hero over Alan870806, with Hunterace and Machamp rounding out the top 4. Hunterace’s hot streak continues – for those unaware, he is having an unbelievable year, including two HCT Tour Stop wins, two finals appearances, and now a top 4. He wasn’t able to push through the top 4 this time, but his lineup seemed well suited against the field and is part of a larger trend in the tournament meta this week. Let’s take a look: 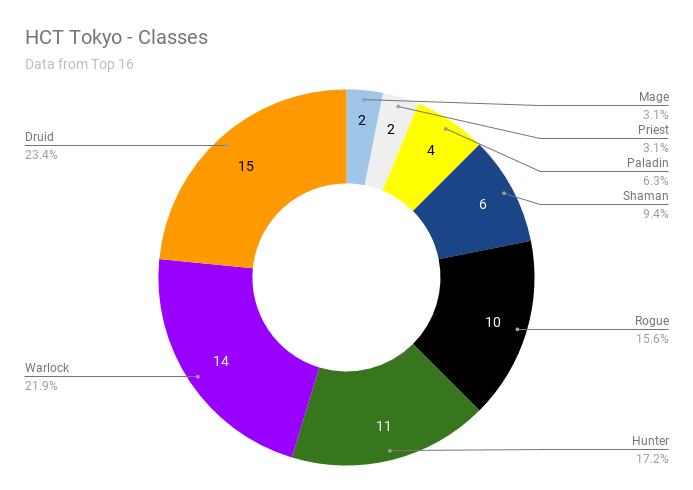 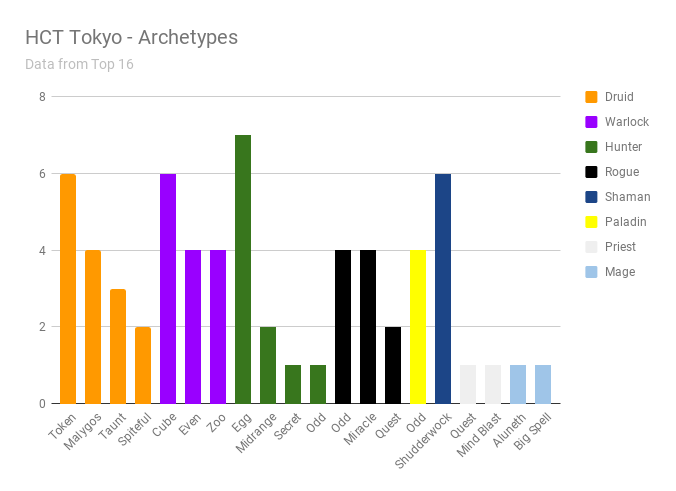 The decks that made it through to the top are very much anti-control. Hinaya won with Token Druid, Midrange Hunter, Odd Rogue, and Heal Zoo Warlock; all decks designed to punish slower strategies with clunky big removal spells. Alan went even further towards anti-control with his lineup, featuring Spiteful Druid, Odd Face Hunter, Aluneth Mage, and Miracle Rogue! Hunterace brought back ¾ of his lineup from HCT Italy, with Token Druid, Odd Paladin, and Odd Rogue accompanied by Heal Zoo instead of Big Spell Mage this time. Machamp rounded out the top 4 with a very different anti-control lineup – Egg Hunter, Quest Rogue, Shudderwock Shaman, and Cube Warlock.

As we can see, this was Hunter’s week to jump in representation, and wow did it ever. The Egg strategy has proven to be quite powerful against damage-based board clears like Volcano and Hellfire, while the faster minion-based aggro decks are great at punishing slower strategies. You’ll see this as well when we get to talk about the next tournament. But first, we have some games to watch… particularly, the last two games of the finals.

These games need to be watched together. Alan’s lineup is clearly meant to target control decks, but facing down Hinaya’s aggressive minion-based lineup seems almost hopeless. But you don’t make it to the finals of a tournament by giving up, and the scrappy fight for Alan goes all the way to five games. The fourth game of Aluneth Mage vs Heal Zoo Warlock is a matchup typically favored to the Zoo, but sometimes the Mage can pull ahead by coming out of the gates quickly and keeping pressure on with burn spells. That’s exactly what Alan did here, in part thanks to a topdecked turn 1 Mana Wyrm – but he also managed his resources extremely well, including optimizing an Arcane Missiles after picking a Flame Geyser from Primordial Glyph to keep pressure on his opponent despite his early threats being traded off.

Just when Hinaya seems to stabilize the board, Alan miraculously topdecks Aluneth, and that card is the namesake of the deck for a reason. The burn starts to pile up very quickly, and it doesn’t take long for lethal to be in hand. Except… Alan waits, casts a couple of Primordial Glyphs, plays a Deck of Wonders, and then kills Hinaya with a Fireball from hand when the rope is almost gone. Was it gaining a psychological advantage going into game 5? Was it just pure BM? Was it both? Only Alan knows, and he’s been quoted as saying he will rope Prince Keleseth on turn 2… perhaps he’s looking to play all aspects of the game including the mental one. 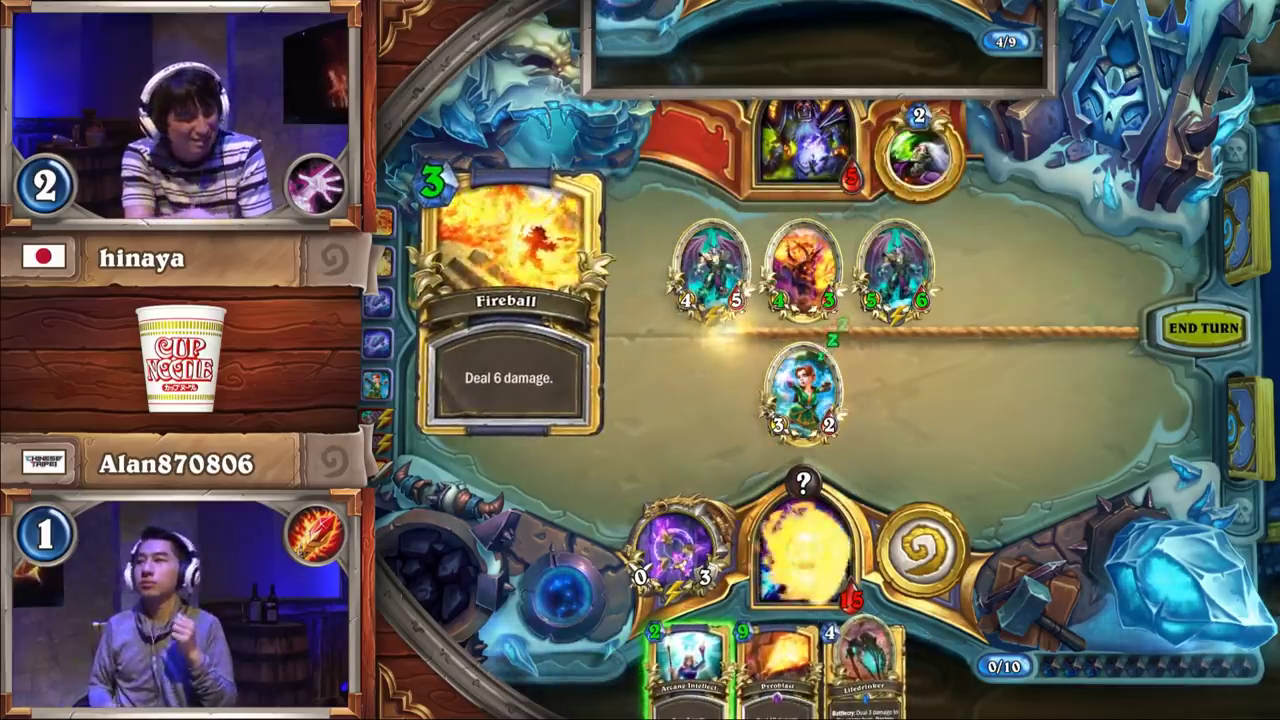 However, it seems like karma is firmly on Hinaya’s side after that extravagant show, and he pulls off one of the most ridiculous Heal Zoo draws we’ve ever seen in game 5 against Spiteful Druid. Turn 1 Flame Imp, Turn 2 double Lightwarden, and turn 3 Fungal Enchanter clears off a Crypt Lord with ease and makes a pair of enormous 7/2 attackers on an empty board along with a free Happy Ghoul! 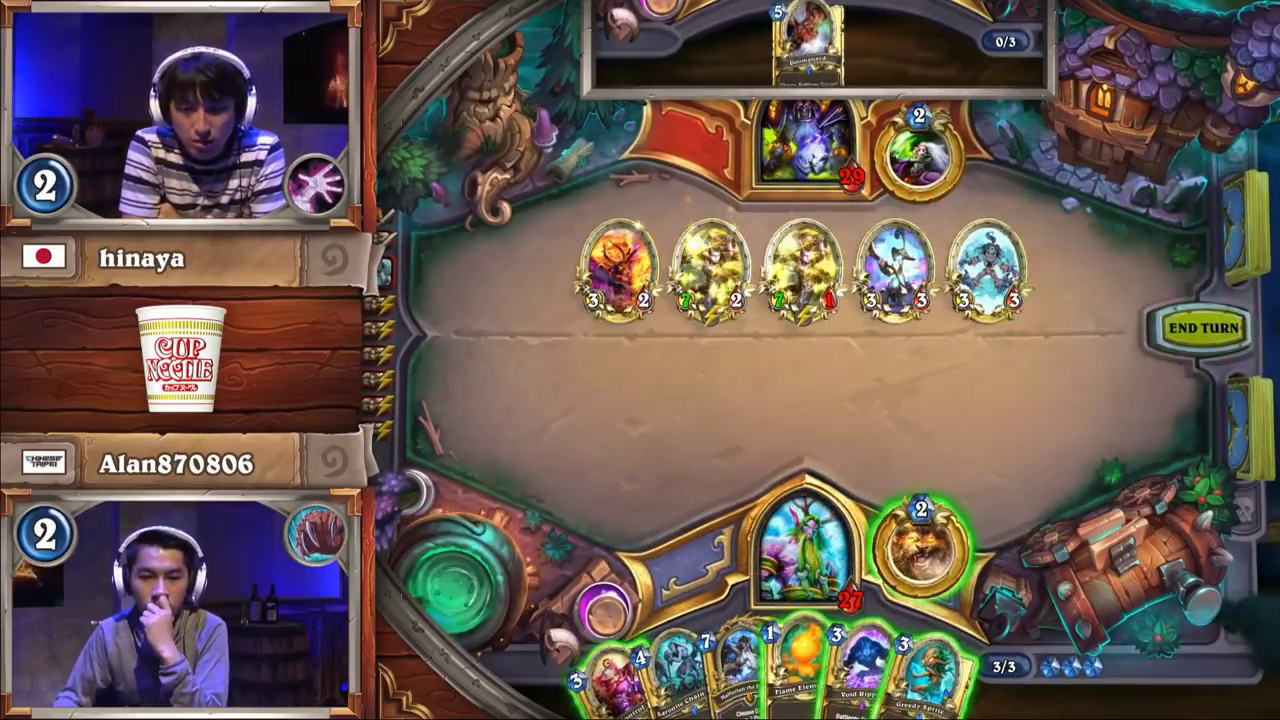 Two turns later, the series is over, and Hinaya walks away the champion.

Now HCT Tokyo was not the only tournament that happened last weekend – SeatStory Cup IX was at the same time in Europe that HCT Tokyo was going and has historically been a really fun tournament to watch. Many of the players will rotate onto the casting couch throughout the weekend, and when the players are some of Hearthstone’s biggest stars both past and present, you can expect some good commentary.

BoarControl ended up taking this tournament down over Casie in the finals. Here’s our top 8 bracket: 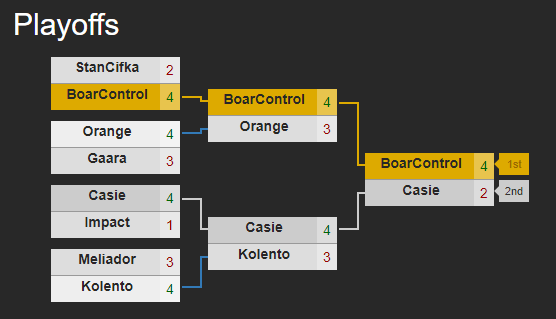 Before we go any further with tournament analysis, we should talk about the format – instead of Conquest, this tournament is Last Hero Standing. Throughout most of the tournament, it’s still the same bring 4 and ban 1 setup as HCT… but when you play the match, instead of being unable to play a deck after you win with it, you instead can’t play it after you lose with it. The player who wins with a deck is required to keep playing that deck for the next game. This leads to a very different metagame, as players will often bring decks that are great for “counterqueing" – for example, if you lose to an Odd Paladin, you can bring Taunt Warrior for the next game because you know what you’ll be facing and you’re heavily favored in that matchup. Keep that in mind before we look at the meta!

Here’s the breakdown of what everyone brought. Note that every player brought five decks instead of four, as in the top 8 elimination rounds, matches change from “Best of 5" to “Best of 7" – players will each have 4 decks available after the ban instead of 3. 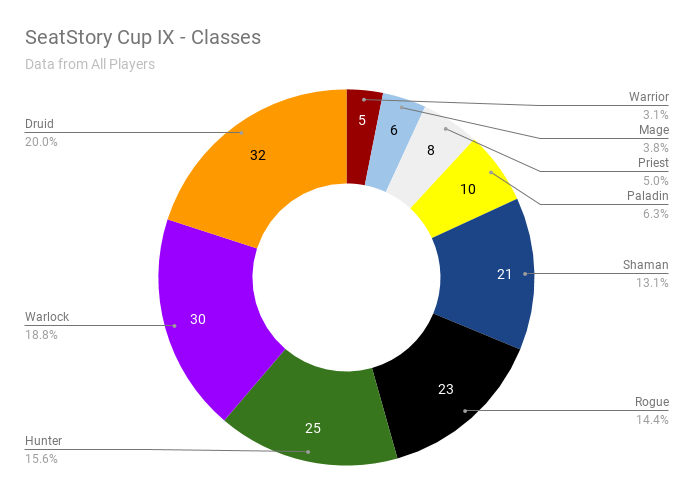 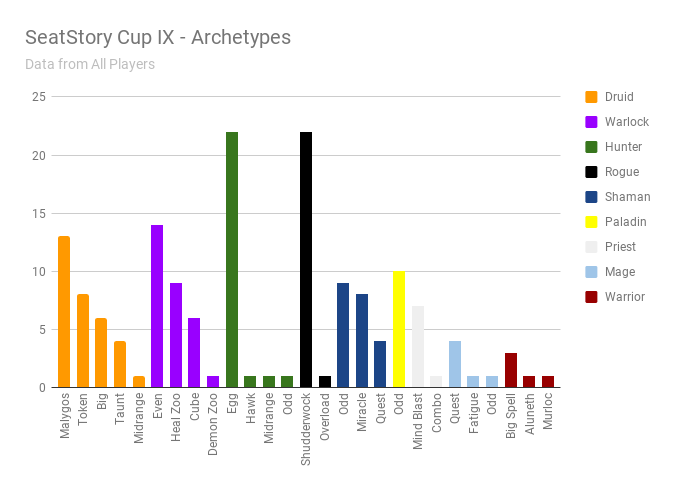 The Hunter representation continues to be enormous, but otherwise this tournament had a much less targeted meta and you can see the more typical inclusions like Malygos Druid winning out in popularity. Still, there are some special decks in there… nobody but J4CKIECHAN could come up with “Hawk Hunter", featuring Young Dragonhawk, Dire Frenzy, and Tundra Rhino. Wow. BoarControl won the tournament with a lineup of Big Druid, Egg Hunter, Miracle Rogue, Shudderwock Shaman, and Even Warlock. Casie came in second with Maly Druid, Mind Blast Priest, Miracle Rogue, Wock, and Cube Warlock. Their matchup ended up being very interesting, and the most interesting game was the Warlock mirror.

BoarControl had the popular Even Warlock, while Casie was bringing the terror of pre-nerf standard with Cube Warlock. Even tends to be somewhat favored here with their ability to generate pressure quickly, but Cube can easily stabilize and lock up the board before swinging in with a pile of Doomguards. The game actually starts off with a surprising number of 8/8s facing each other down – *four* Mountain Giants have been played by turn 6! BoarControl also manages to fit in a Skulking Geist, removing the vital Dark Pacts from Casie’s deck to keep those Cubes from releasing Doomguards for one mana. 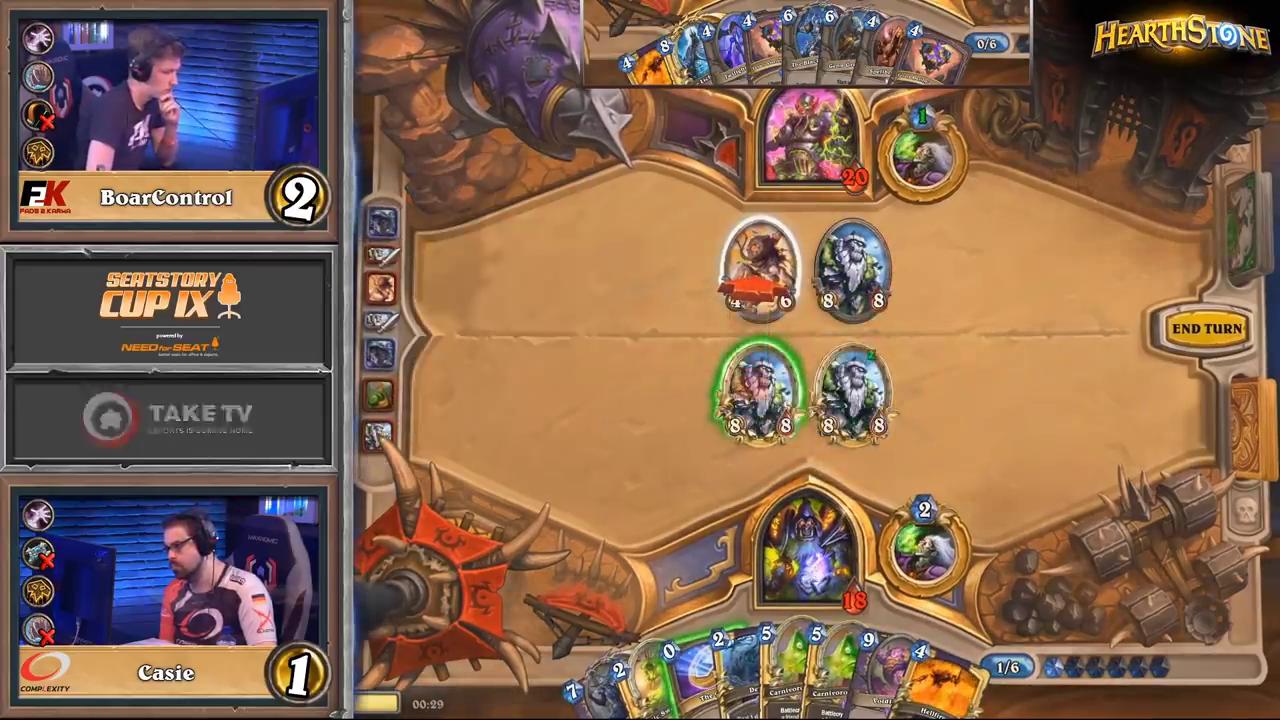 But after all the dust settles, there are no more Giants to speak of. The game presses on and BoarControl has a hand packed with all the threats in the world. At this point, he does what Even is known to do… start the slow and steady application of pressure. The Black Knight comes down to eat a Voidlord, flanked by a pair of Twilight Drakes and followed by a pair of Hooked Reavers – one gets answered and the other is right behind it. But while BoarControl is busy using Life Tap to keep his hand full, we should note that he’s at 9 life against a Cube Warlock… and that Lord Godfrey can come down to clear even the largest board. Casie is able to get rid of everything! 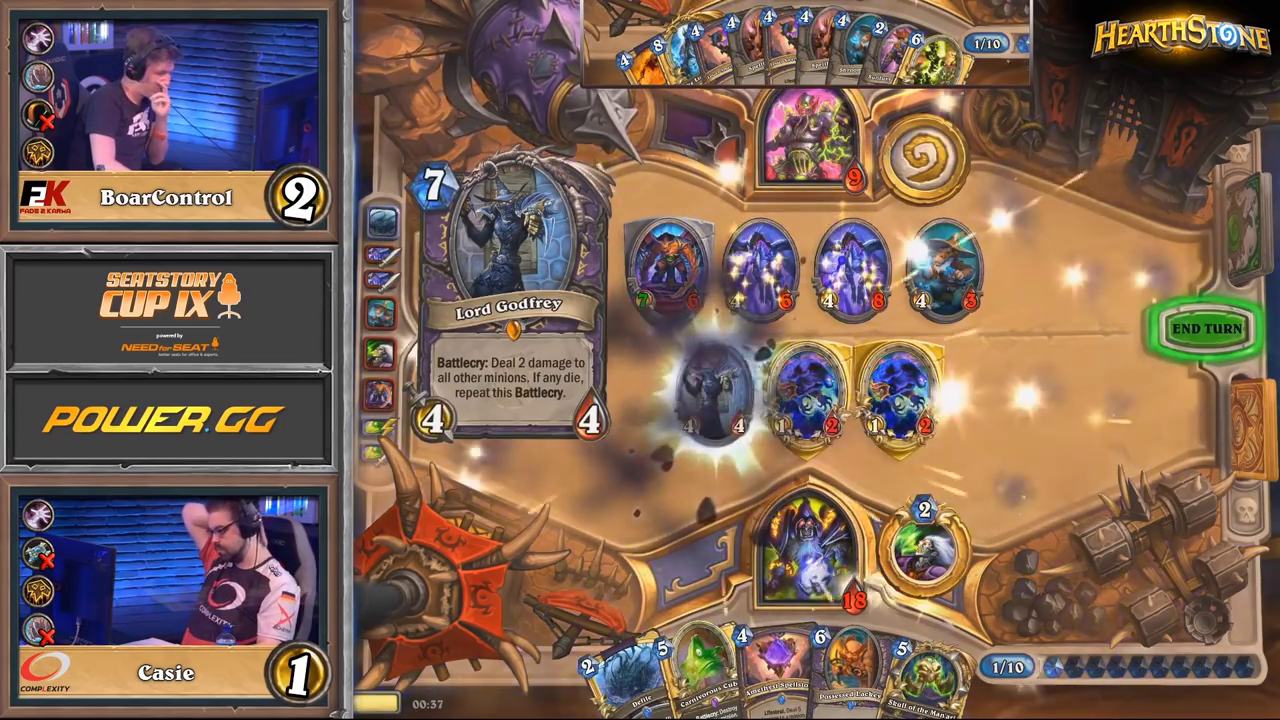 Unfortunately, he can’t get rid of the threats in BoarControl’s deck, and the Godfrey barely takes the edge off. Lich King comes down followed by a Mountain Giant – will the 8/8s ever end? They will exactly one turn later… when the game ends thanks to a lethal attack and Casie gets pushed back to his last available deck.

BoarControl ended up taking the series, thanks in no small part to his precise play in the last game. 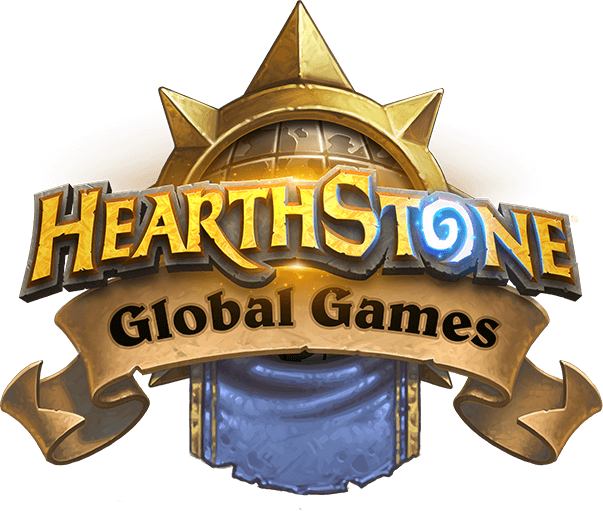 In addition to the tournaments above, the ongoing attraction that will be running for the next three and a half months is the Hearthstone Global Games. Many of you may have already selected a champion for this and earned yourself a free pack in the process – but what are the Global Games? Well, 48 countries are each represented by a team of 4 players from their host country and they all start in a 6 round swiss bracket to graduate to the round of 16. In this standard format tournament, each team prepares all 9 classes with open lists. Both teams then go through a pick-and-ban process and end up with 5 classes, pick the order that each deck will be played in secret, and then play it out until one of the teams has won 3 games! It’s an interesting and diverse format that shows off a variety of decks. Keep in mind that a predictable meta is much harder to come by here, especially with the 9-deck and fixed-order nature of the matches – the decks you see here are unlikely to translate well to success on the ladder or in most tournaments.

Now, a round of 24 matches is far too comprehensive to cover game-by-game or match-by-match – but we can give you the standings, some teams to watch, and some games that really stood out if you want to go back and catch a snippet. This week is already pretty packed with tournament info, but the next couple weeks will be quiet as The Boomsday Project gets rolling – we’ll recap the first three weeks of the Global Games right here while you’re out there playing with the new cards. 🙂

Until next week – and if you see us on the ladder, Coin Concede!