It’s been almost an entire week since the Arena of Valor World Cup came to a close. We’ve talked about that whole thing a little too much over the last few weeks, so we’ll let Eli’s first-hand experience of the Grand Final  fill you in on the details as we dive right into this week’s hottest Arena of Valor news. There’s no sketchy skins or animations to talk about this week; just a new long-awaited hero, an award, and the three most consistently used and abused heroes from the AWC. Ok, yeah, we’re talking about the tournament still.

Roxie Rolls Into Arena of Valor

Continuing the trend of releasing characters we’ve been seeing on foreign YouTube videos for months, Roxie has finally come to the Worldwide servers. Being another warrior/tank combo means we’re going another two weeks without a shiny new support hero – but at least this time the tank character isn’t almost literally a tank. She costs the usual 18,888 Gold and arrives with the Detective alternate skin.

Roxie fills in both of these roles well depending on her item choices, dishing out damage when needed, or asking as a bit of a bullet sponge when you need to put a stop on the enemy team’s advances. As ever, there’s a hero spotlight video for some second-hand gameplay experience, but there’s not too much to read up on here. She’s fairly balanced across the board when it comes to stats, so building her to match the situation at hand shouldn’t be too difficult.

Roxie, with Angie, the spirit living in her scythe/pickaxe, roll around the battlefield on skates, consuming mana to quite literally light a fire under herself to damage nearby heroes. Damage caused this way heals her for a fixed percentage of HP over time. Gaining additional ability power through more HP, it’s clear she demands a big a health pool as her equipment will allow. Her ultimate allows her to drag her target for a few seconds as she moves, so expect to be dragged under a tower any day now.

Three Heroes You’ll Want To Keep An Eye On 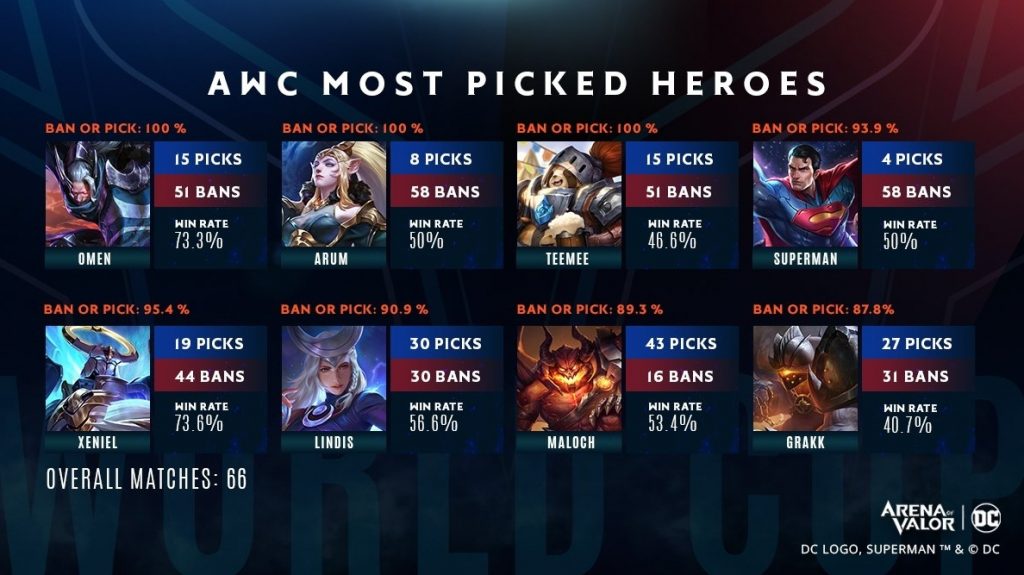 With the vast majority of the AWC taking place in the American evening, European players (like myself) found it difficult to tune in thanks to some unfortunate timezone differences. So while plenty of us couldn’t look into which heroes were being consistantly picked and banned to improve our awareness of the situation, the Arena of Valor team went ahead and covered it for us. And the results are, honestly, impressive.

Superman may have become one of AoV‘s best memes in recent months with his insane speed and high and seemingly indestructible body, but the man of steel just missed out on a 100% pick/ban rate throughout the AWC. Three other heroes, however, did not.

Tallied up over the course of 66 matches, the Arena of Valor team found that TeeMee, Omen and Marja all managed the tremendous feat – meaning if they managed to survive the ban phase before each match, they were immediately picked up by a team. All 66 matches had the thumbnail for each of those three heroes show up at some point, and we think that’s just incredible. Read into that however you like, but just know that there’s likely a reason for their constant use in competitive play. We can bet you’ll be seeing a lot more of them from now on. And just think; TeeMee was nerfed almost immediately when it released earlier in the year. Scary.

There’s A New Tournament In Town For The Budding Pro 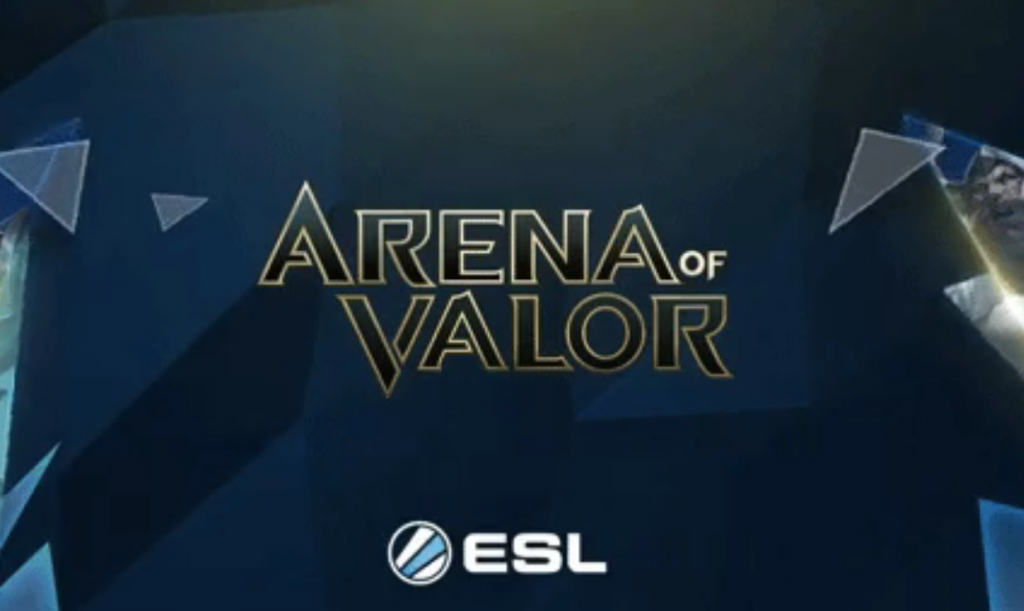 Two months after the final ESL Community Cup, the whole thing has been given a second chance at life. For the uninitiated, the ESL Community Cup came long before the Valor Series and AWC – at least for those on the US/EU servers. Offering cash prizes without the need to commit to a professional team and travel all over the world, it’s a weekly tournament that helps facilitate finding a team you love playing with and getting a feel for true competitive play.

With the first taking place last Sunday – just a day after the AWC Grand Final – the second is set to take place this Sunday in true ESL fashion. Signing up should be fairly straight-forward thanks to the ESL Play website. There’s even a dedicated Discord server to help you find a team to play with.

Before the Valor Series kicked off, the folks from the EU AWC team For the Dream regularly crushed the competition. They got their start there, and there’s no reason why you can’t do the same.

Team Allegiance On ‘Not A Paid Sponsor’ Podcast 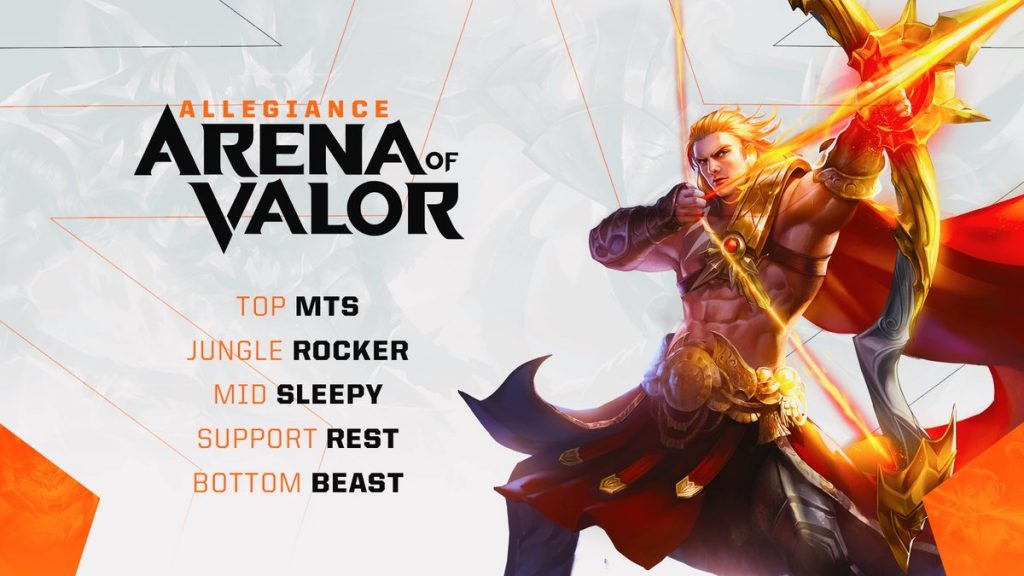 We’re going to gloss over this one for now, but those who backed Team North America throughout the AWC might want to tune into the ‘Not A Paid Sponsor’ podcast around this time next week. The pod, which started in late May, typically covers numerous pop culture subjects, but the overwhelming growth of gaming over the last few months means Fortnite, esports and, coincidentally, MOBAs hog a lot of their airtime if the episode synopsis is to be taken without a grain of salt.

So, as you might expect, the AWC has been the topic of focus for the last two episodes. With Team North America getting knocked out in the late stages – and, you know, the whole thing being over now – the host has roped good friend Mts of Team Allegiance – who represented North America in the tournament – onto the show for a little catch up. It’ll be good to finally hear his voice. 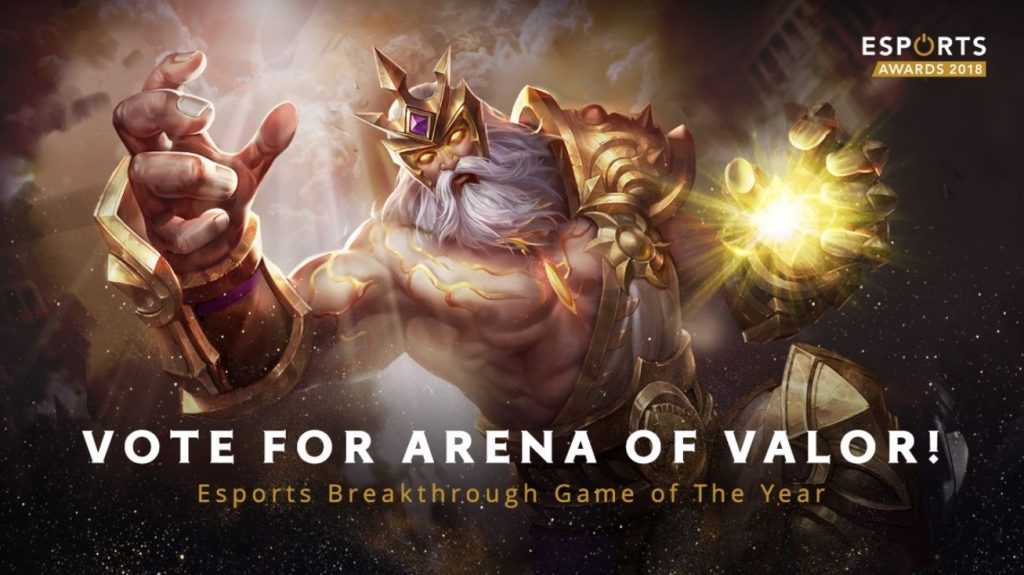 We’re not sure why anyone would vote for their favorite Esports commercial partner for a partner of the year award, but at least the Esports Award hands out awards to the actual games played, too.

This year, Arena of Valor sits between games like Dragon Ball FighterZ, Fortnite, Clash Royale and NBA 2K18. You may think it’s doomed to lose already with the EVO hype about to set in over DBZF, but there’s no denying Fortnite has caused the biggest stir in gaming since the Minecraft days. Not that those are over, mind you.

But we can all help! If Arena of Valor has been your preferred competitive game this year, be sure to vote. If it can’t manage to hold the crown, we can at least get it above games like Clash Royale, Call of Duty World War 2 and FIFA 18 of all things. They’ve had their time.