Welcome to another SwitchArcade Roundup! However, it’s more than just “another" SwitchArcade Roundup because it’s Thursday! That means a plentiful amount of new releases and–especially for this week–a massive amount of sales. All of the releases and discounts will be mentioned in some capacity later on, but before you even THINK about scrolling to the bottom of the column for the new sales, let’s talk about some news, new releases, and of course, the Game of the Day! 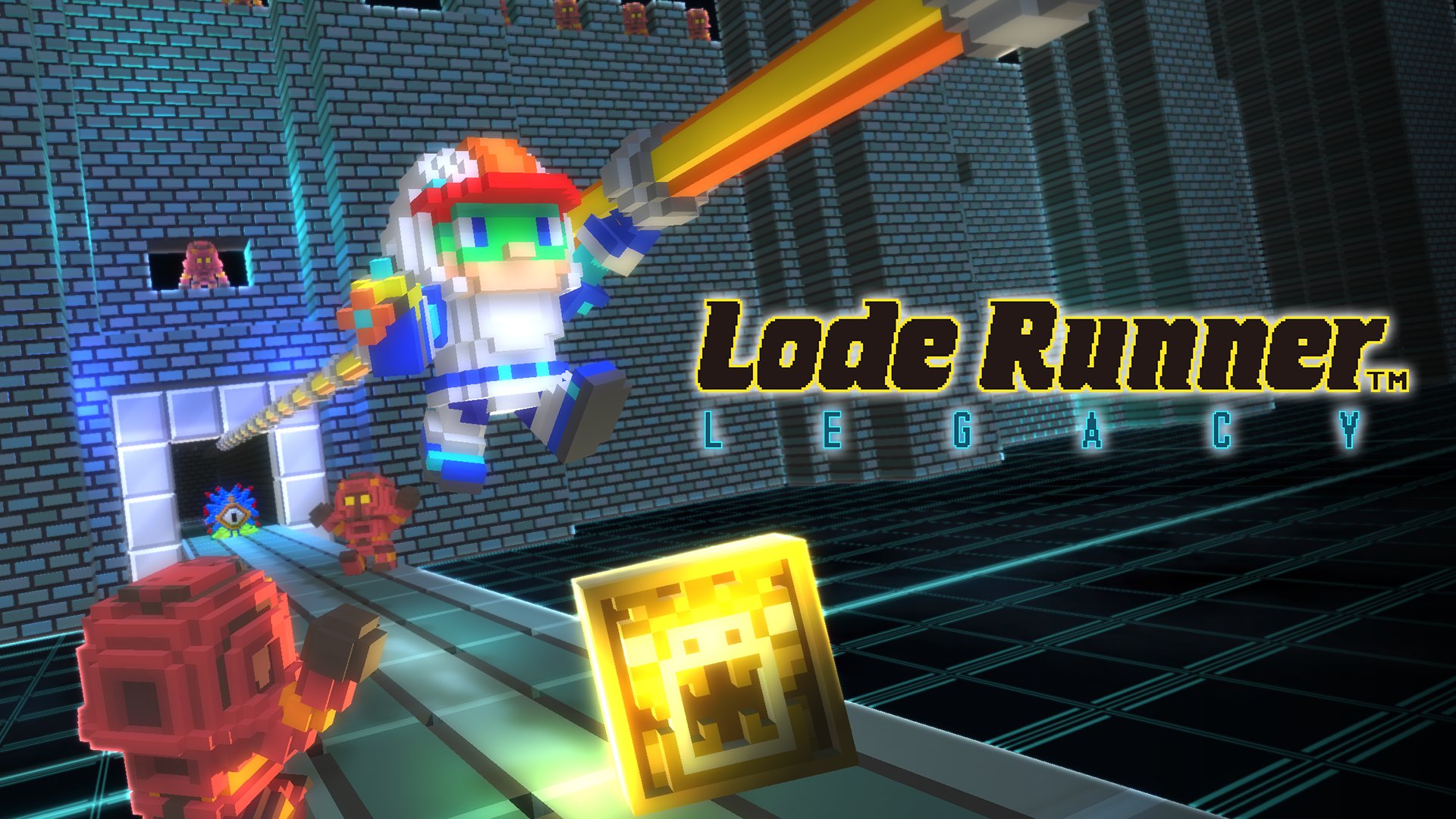 When I was in the fourth grade, our homeroom had one of those then-new Macintosh computers–the one with the big, colorful bulges in the back. Whenever there was free time allowed to our class, I would rush to the Macintosh and play Lode Runner. While my loser friends stuck with Where in the World is Carmen Sandiego? and Frog Fractions, I was on the expressway to Coolsville with Lode Runner–and I didn’t even have a license.

Enter Lode Runner Legacy, released on Steam last year, and available on the Nintendo Switch as of this past spring. It traded in Lode Runner‘s old school graphical style of pixels for retro-inspired voxels, added creation and sharing tools, and introduced a new cooperative mode. 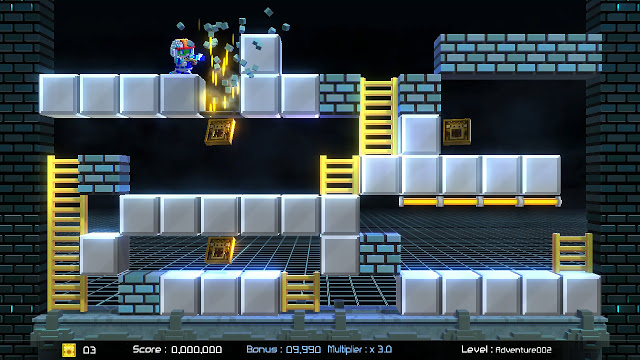 For those who haven’t delved into a Lode Runner game before, Lode Runner Legacy follows the formula of the franchise to a “T". You try to collect all of the gold in a level while evading enemies, as one hit means you have to start the level over. However, old Lode Runner isn’t just a running fool here–he can also dig like a dog with a bone. Lode Runner is capable of digging a grid-wide and grid-deep hole that enemies can fall into, then use their heads to cross over them. Holes are also mandatory to reach gold trapped in deep in bricks. He just has to be careful that he doesn’t fall into a gap with no means to get out. 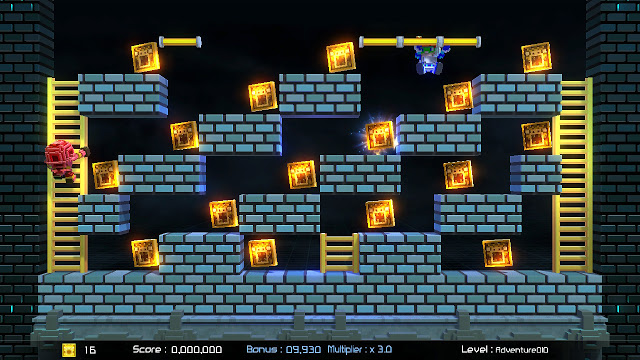 Lode Runner Legacy comes packed to the brim with five major modes. There is a collection of 50 levels following a very, very, very loose “story" known as Adventure. There is Extra, which adds 20 more levels to play, many of which introduce enemies that only show up there. Puzzle has levels completely devoid of enemies, where you need to get all the gold and escape the level–requiring you to figure out the proper sequence and timing to destroy blocks. 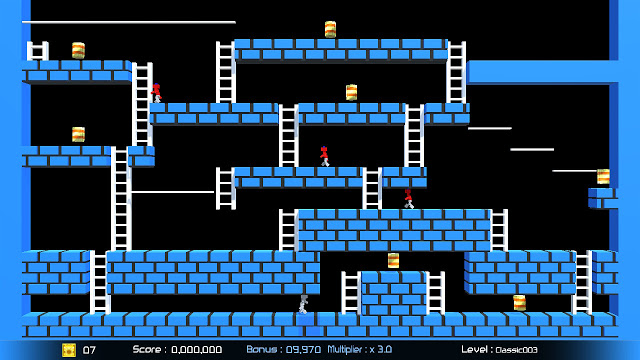 Then, there’s the 100 levels of Classic mode that are all copied over from the original Lode Runner game and have an old school graphical appearance to them. Last but not least, World gives you the opportunity to work with all of the creation tools where you can make levels, characters, and collectibles. These can be shared and downloaded by other players. So, if you ever wanted to get radical with some bodacious Teenage Mutant Ninja Turtles fun, just download someone’s Michelangelo character, Foot Soldier enemies, and a pizza for the collectibles (and yes, they ARE there to download), and you are on your way to party like it’s… well, since the TMNT are still relevant, party like it’s any time between the 1980’s and now. 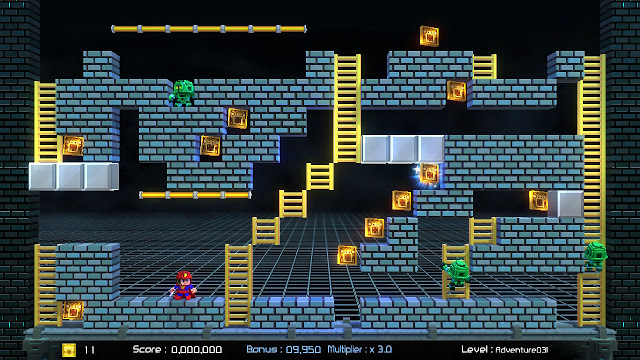 Lode Runner Legacy may be packed with many levels and modes, but if you find the gameplay repetitive (as there isn’t too much to change things up gameplay-wise), then much more of something grating might not be the most worthwhile value proposition. As the game is on sale now (as of today until August 8th), I do recommend Lode Runner Legacy, but if you’re unsure, there IS a demo available to try the game out. You might just “dig" it. Ha, what a “lode" that pun was! 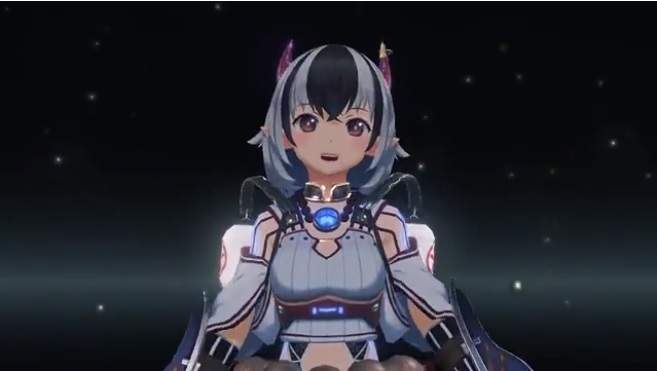 The duo of Nintendo and Monolith Soft have revealed what’s in store for the next update for Xenoblade Chronicles 2. If you’re keeping score at home, this is Xenoblade Chronicles 2‘s version 1.5.1 heading to owners of the game. In addition to new downloadable content, quests exclusive to the Expansion Pass will be included, as will an entirely new Rare Blade named Hibana. As a bonus for fans of the original Xenoblade, this new update will add the theme “You Will Know Our Names" to unique monster encounters. You’ll just need to have guest characters Shulk and Fiora in your current party to rock out while you knock out these especially tough monsters. You can update your copy of Xenoblade Chronicles 2 tomorrow, July 27th.

Overcooked 2 is the sequel to the hectic and heated cooperative cooking game where players race against the clock (and against the environment) to prepare and cook tasty dishes–all the while forming and chucking creative combinations of curse words at one another. Today publisher Team 17 and developer Ghost Town Games have revealed a new trailer for Overcooked 2 that shows off the bonus chefs obtained exclusively by pre-ordering the game. In alphabetical order, the five chefs that make up Kevin’s “Too Many Cooks" pack are Alien chef, Calico Cat chef, Monkey chef, Unicorn chef, and Walrus chef. Bon appetit, fellow captains of cookery, when Overcooked 2 serves up some fun on August 7th.

This past E3, Konami unveiled a trailer for its new Switch-exclusive, Hyper Sports R, a continuation of its “R" game branding. The first of which was Super Bomberman R, a revival of Bomberman after many years on hiatus. While that game got a lot of excitement and anticipation from fans, Hyper Sports R received a frostier reception. While first impressions do matter, there hasn’t been a playable demo for first impressions of actual gameplay yet. That is until late next month when Hyper Sports R makes its playable debut at this year’s Gamescom. The demo will feature three events: Track & Field, Swimming, and Beach Volleyball. You know what that means–time to break out the headbands!

Sonic Mania has been a massive success both critically and commercially. To celebrate the then-oncoming launch of Sonic Mania‘s DLC and physical version, Sonic Mania Plus, SEGA turned to Tyson Hesse and Neko Productions to devise five animated shorts that perfectly capture the spirit of the old school Blue Blur. Check out this behind-the-scenes sneak peek at what went into these animated marvels.

Part of Devolver Digital’s “Summer of Devolver"–a whole month of Switch games with a new release every week–is Minit, a game where days play out in sixty second intervals. (I just learned this morning that sixty seconds equal a minute thanks to my pals on Sesame Street! Hooray for knowledge!) Following today’s release of Crossing Souls (we’ll get to that in a jiffy), and next week’s Not a Hero: Super Snazzy Edition, Minit will timely arrive on the Switch eShop on August 9th with a $9.99 price tag.

Sleep tight, don’t let the bed bugs–FORGET THE BED BUGS! YOUR BEDROOM IS CRAWLING WITH MONSTERS! …Ahem! Sleep Tight is a clever game comprised of two parts. By day, you build your bedroom base, fortifying it with pillows and blankets. By night, you must defend your bedroom from ghastly monsters of all shapes and sizes in a twin-stick shooter frenzy. It’s like my childhood, except the monsters in Sleep Tight don’t look like Raggedy Ann. That doll creeped me the %#$^ out.

1986 was a fun year. No, not just because I was born that year (though I’m sure many of you were thinking that! …Okay, just my mom), it’s also because it’s the year in which Crossing Souls is set. The first game released under the “Summer of Devolver" promotional campaign (mentioned earlier in this edition of the Roundup), Crossing Souls has players controlling five kids with their own unique abilities. By switching out characters on the fly, figuring out the solution to puzzles, and fighting foes, players can uncover a Stranger Things-like mystery and thrilling adventure.

If art styles could sell me on games alone, then Candle: The Power of the Flame would have me flinging dollar bills at it like a monkey flinging poop. Described succinctly by the developers as “an adventure with challenging puzzles", Candle gives you plenty of time to survey the grandiose and gorgeous environments while discovering the solutions of the puzzles put in your way as obstacles.

Dawn of the Breakers (Free-to-play with microtransactions)

The Switch’s trend of mobile and F2P game ports shows no signs of stopping. This time around, we have Dawn of the Breaker, a superhero, Super Sentai-esque action game that features a full fledged story mode, a massive ensemble of heroes to select from, and online competitive one-on-one duels and two-team deathmatches. I’m happy to see another F2P game on the Switch that looks interesting. I’m also happy to see that I didn’t accidentally type an “H" instead of an “S" for Super “Sentai".

If the Piczle puzzle perfection of Piczle Lines DX wasn’t enough for you, now Rainy Frog Games has 500 more puzzles in its appropriately named Piczle Lines DX: 500 More Puzzles. From historical figures to famous locations, use either your Joy-Con analog stick or your finger to fill a grid correctly to reveal all varieties of pictures, people, places, and objects.

Phew! We made it through the storm of sales, everyone! I hope all of you are as drenched with games from the sale as I am! While I take the rest of the evening off to play some of those aforementioned games, keep your Joy-Cons charged and your Switches entertained with great games!