What do you look for in a simple mobile game? I look for something that I can pick up, toy with for a few minutes while I’m waiting for my coffee and then put away. Something that grabs my attention in an instant, but doesn’t hold on too tight. This week, Rowdy Wrestling (Free) has been just that. It’s been the perfect five-minute time waster when I’m waiting for the bus, sitting on hold on the phone or waiting for someone in the office.

It’s a simple, zany, pick up and play brawler that doesn’t ask too much and doesn’t overstay its welcome. It’s a pixel art fighting game that throws you into a side-scrolling wrestling ring with a bunch of other wrestlers and basically says “last one in the ring wins – GO!” Oh, and it lets you drop kick a luchador from the top rope, so that’s worth something in my book. 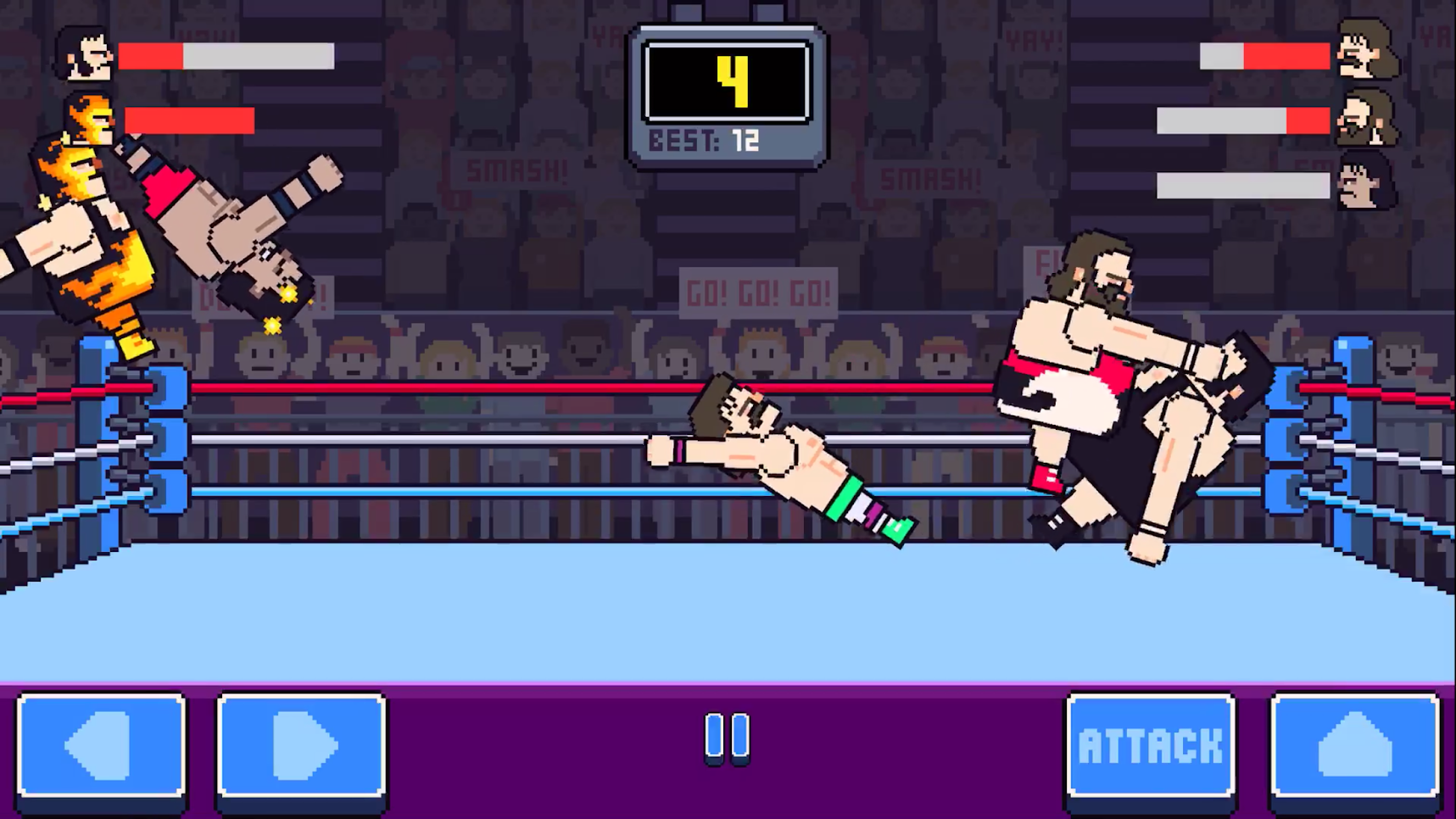 Rowdy Wrestling is the epitome of keeping things simple. You have four huge buttons on screen that correspond to your four movements: Left, right, jump and attack. That’s really all you need to succeed. When you press attack your character will swing both arms forward wildly and smack any muscle-bound dudes unlucky enough to be standing in front of you. When their health bar is empty, an attack becomes a huge lift and throw that sends opponents hurtling through the air back and over your head. This is the bread and butter of the game – weaken enemy, throw enemy, repeat.

The characters are all stiff as boards except for their swinging arms and the games physics has them bounce like toys when the get hit or thrown, meaning a cluster of four wrestlers can be a mess of flailing arms and thrown bodies until one dazed man stands victorious.

When you get into it there are some slightly more complex tactics. The aforementioned drop kick is done by jumping then attacking, which tends to knock some dudes out cold. And if you do it off the top rope you’ll almost always get them in one go.

Around the edge of the arena, coaches will occasionally stick their hands in holding weapons, so grab them and swing wildly. These range from chairs, to batons, planks of wood and more. They do incredible damage, but the enemy will rush for them just as you do, and there are few things more exhilarating (or terrifying) than being one of two left standing and the other guy just grabbed a steel chair. 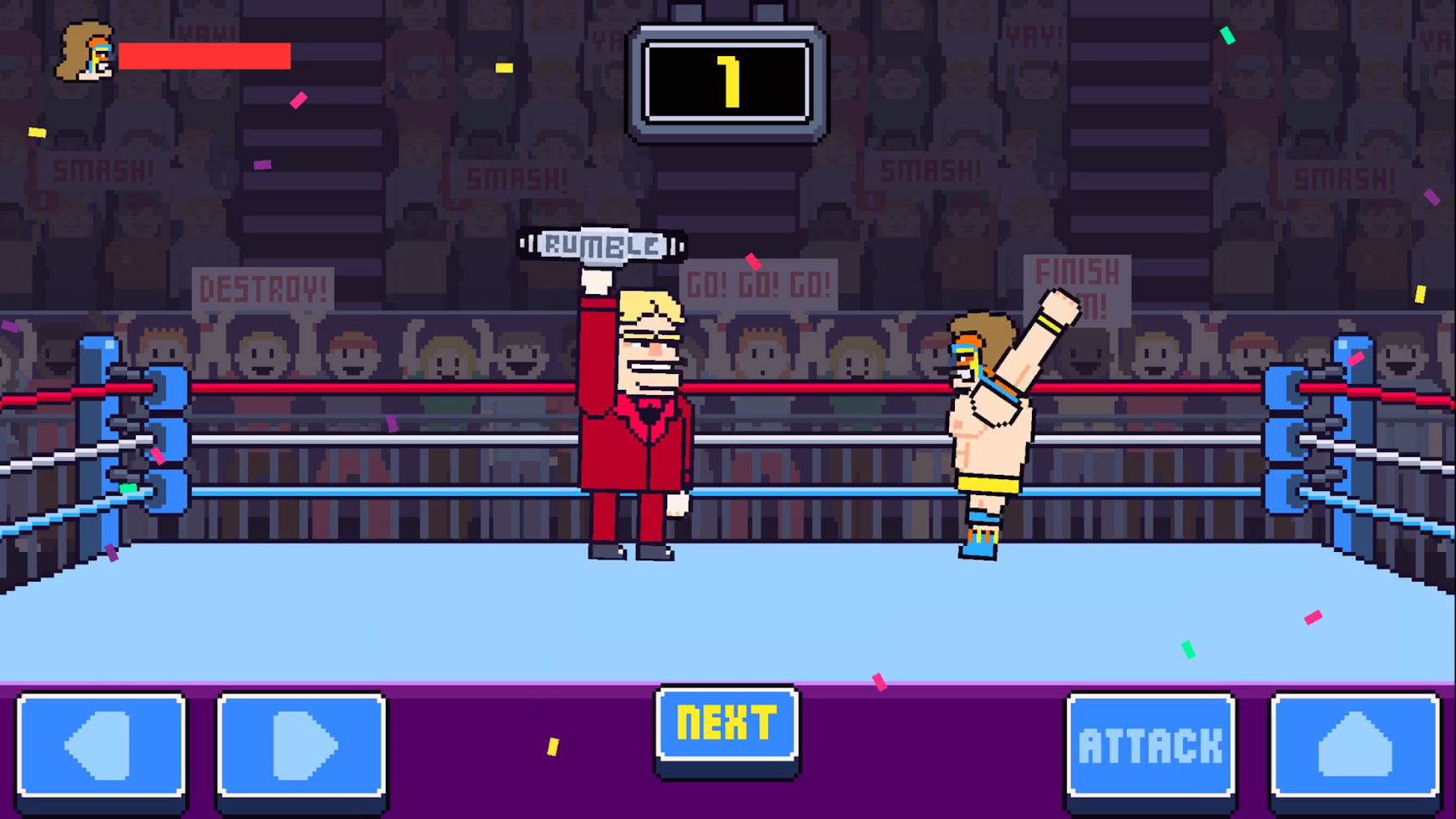 Make a career out of it

When it gets down to it, there are a couple of game modes on offer. You can complete a Rumble on your own or in a tag team, with a whole bunch of wrestlers to beat up. The game will drop a series of themin from the sky one after another, and the last one standing wins.

Or you can complete a season on your own or in a tag team, which is a series of one-on-one or two-on-two fights strung together. There’s also an Endless mode for each that throws competitors into the ring and asks you how long you’ll survive.

There are 55 wrestlers to unlock over the course of your game, and they all have slightly different Power and HP stats. They all have appropriate wrestler-y names as well, like Brent Diamond, Wes Phoenix and Bonk The Clown. Their costumes are all as weird as you’d expect, with some looking like extras out of an episode of Sons of Anarchy, while others are dressed as tubby sumo wrestlers, clowns or off-brand super heroes.

You unlock new wrestlers and tag teams from the select screen by spending coins. Coins are gained relatively quickly from matches, as well as extras if you choose to watch an advertisement – it is a free game after all.

All this isn’t to say that Rowdy Wrestling is perfect. I did find that more than once I was longing for just a little more control going into a fight, that the ring was too small and the opponents too big. Also, when I saw a tag team option on the main menu I almost jumped for joy at the thought of a whacky pass and play wrestling game I could play with my girlfriend while we watch TV. Unfortunately, the tag team mode just pairs you up with an AI partner and lets you go nuts as a duo, no multiplayer to speak of here.

In the end, Rowdy Wrestling doesn’t try to set the world on fire or change the face of mobile gaming as we know it. Rowdy Wrestling is exactly what it say on the box – it’s easy to pick up, hard to put down and sometimes that’s just what you need.