Endlessly falling into oblivion, grasping firmly to your partner’s hands, your momentum shifts and you begin to spin wildly out of control. A set of mines is approaching. Working against the force of your spinning, you miraculously regain control and narrowly miss each set of incoming mines. In the distance you see a platform speeding towards you. The only path through is a small hole in the center. You take a deep breath, begin to arch your back in a last ditch effort to fit… and somehow manage to slip past the platform unscathed. The enjoyment of this victory is momentary: the next challenge is mere seconds away. Relaxation isn’t an option.

Don’t Let Go – Free Falling (Free), developed by Alimote ApS, is a “hardcore endless faller" in which you adjust the position of two humanoids (think wooden drawing figures) grasping to one another only by their hands. You’ll find a multitude of obstacles with different attributes obstructing you path, all needing to be evaded. Your sole goal is survival. This world is out to get you. The mixture of speed and tension will likely resonate amongst fans of Thumper ($4.99) and Race The Sun ($4.99). While it’s eons away from “rhythm horror", Don’t Let Go presents multiple opportunities that land near Thumper’s tension-filled moment-to-moment gameplay. 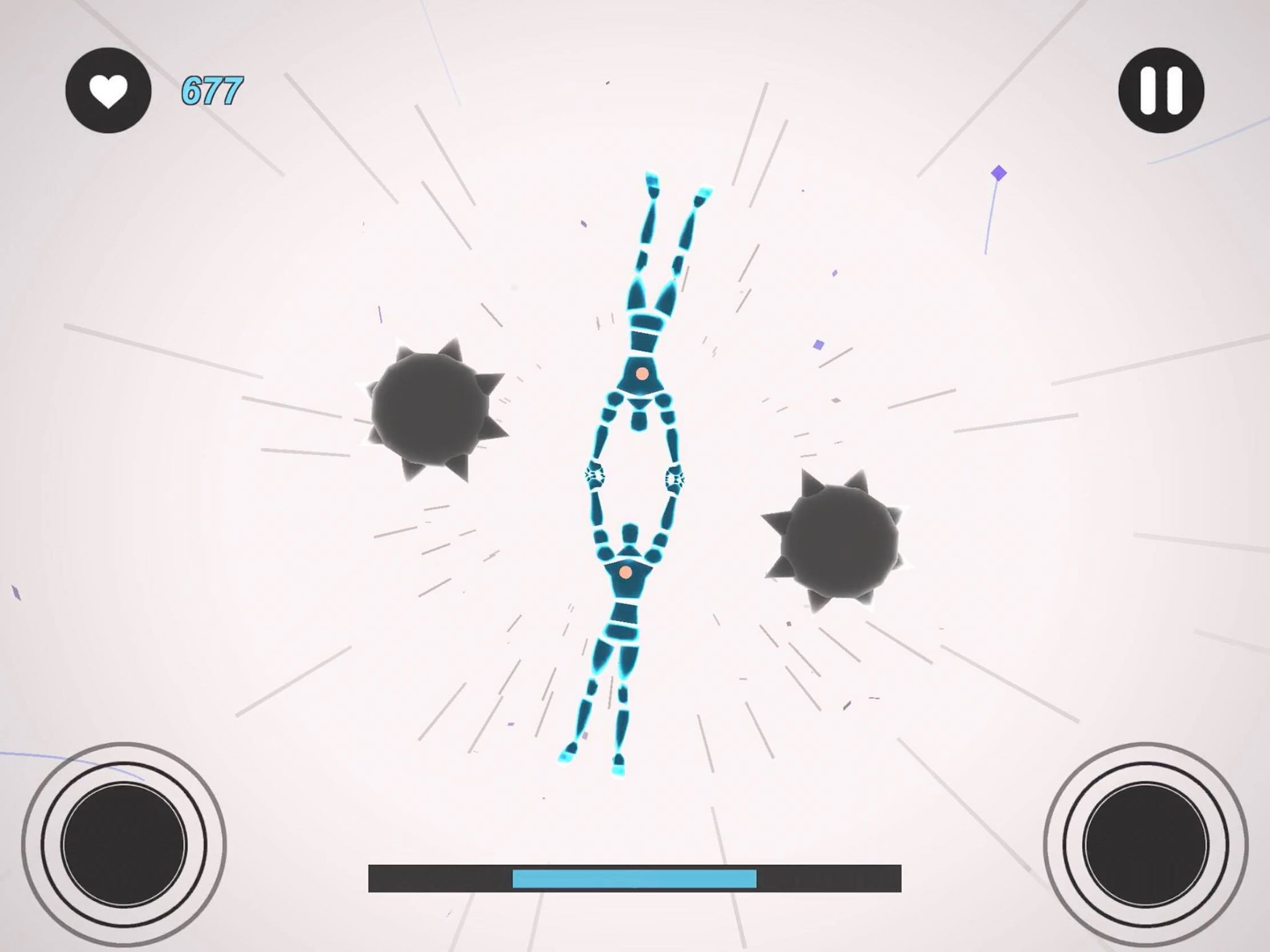 Anxiety begins to seep within as the droning soundtrack begins to slowly build up and an immersive sense of speed gain and difficulty brutally ramps up. Don’t Let Go is hard. Death should be expected. You’ll be struggling from the get-go, but ultimately it will click. The process of learning how to precisely maneuver the tandem free fall duo alive feels satisfying. Speaking of soundtrack: Don’t Let Go‘s droning dance/electronic soundtrack beautifully fits alongside its ambient noise. Wearing a headset (and cranking it) is strongly encouraged. The soundtrack of Don’t Let Go not only compliments its gameplay, it greatly enhances the complete package if you let it take your full attention.

The control method of Don’t Let Go is one that is easy in concept, but hard in practice. Movement is managed through two on screen buttons: spin the left playable character with the left button, spin the right with the right button. Press both buttons to arch both characters backs and increase speed — also adapting your hit box to fit through various circular obstacles. Be warned: increasing speed comes with the cost of stamina, a mechanic you will learn to balance in time. Success can only be had when you find your personal balance of controls and begin to lightly nudge the characters back and forth. If you attempt to move erratically, you’ll spin out of control. Finding yourself in a loop is harder to recover from. This remains true even in the earliest moments of your run. 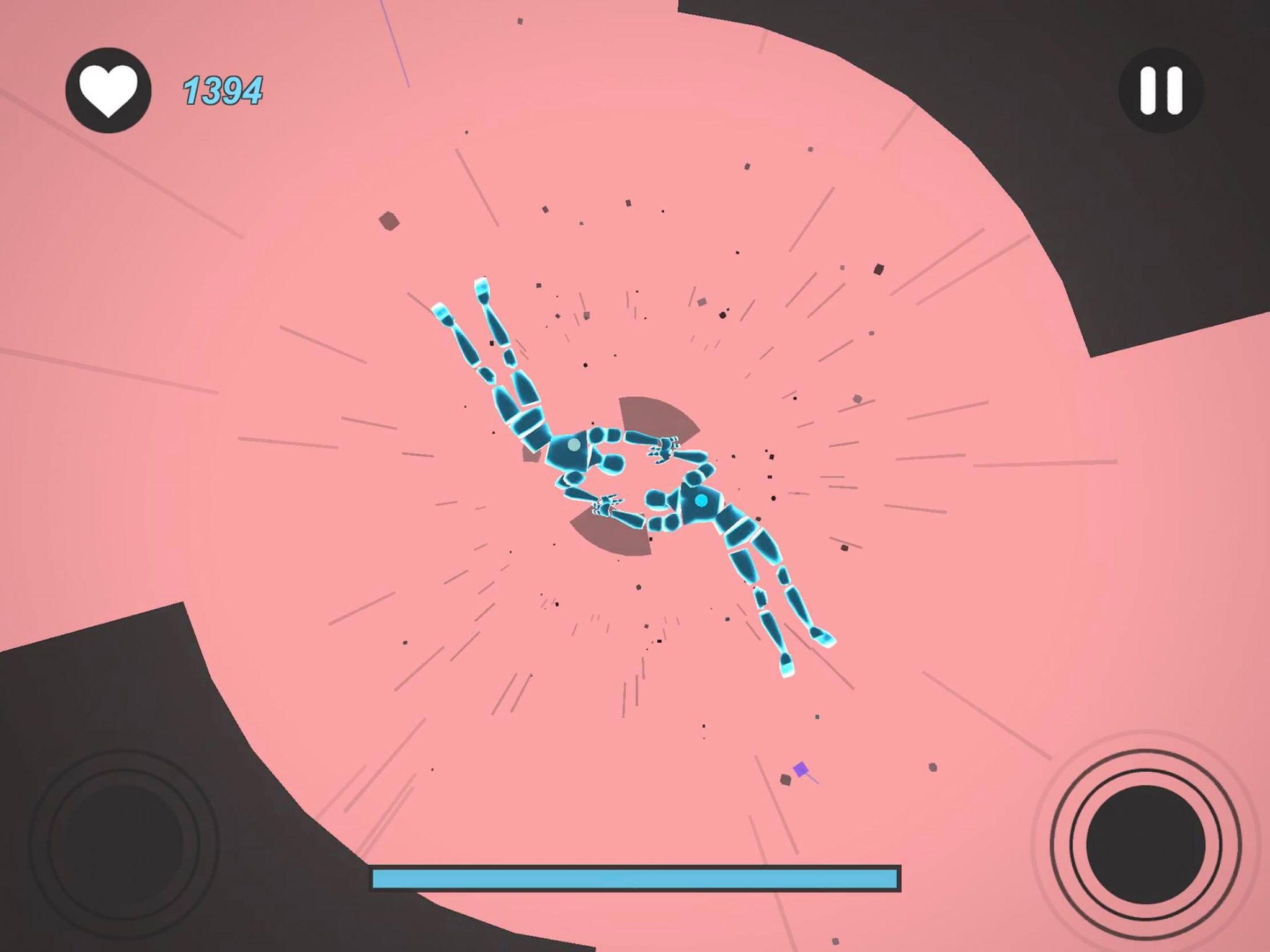 Scores within Don’t Let Go can be padded by two forms of collectibles: blue pickups, which tack on 3 more points per collectible; and green pickups, which boosts you past a few obstacles in an invulnerable state. Collecting these powerups introduces a power struggle of risk vs. reward, so always choose quickly and wisely. While endless runners of the past typically relied on in-app purchases or boosters as attempts to keep you playing, Don’t Let Go exceeds solely on the inclusion of its leaderboards. I instinctively found myself yearning for top spot. Each new high score received seemed once impossible. Now, I held that spot in my possession, albeit bloodied, broken and bruised from prior failed attempts.

Don’t Let Go nails the blend of pick up and play gameplay while pushing the player into a “one more round" mentality. It’s quickly obvious the developers subscribe to the concept of simplistic aesthetics (think somewhere between Race the Sun and Superhot) complimented by solid core mechanics. Don’t Let Go isn’t complex, nor groundbreaking: it just feels good to play. It’s fun. A task many attempt but only few achieve. With that being said, Don’t Let Go isn’t without its faults. The biggest flaws are apparent by lacking a progression system (i.e. quests, daily missions, etc.) and player customization (neither IAP or gameplay earned). With a little extra time spent towards the prior, Don’t Let Go could really place a foothold alongside the similar apps that seem immune to falling off the charts.

Don’t Let Go’s monetization structure is fair and should continue to be applauded amongst mobile players: free to play (with ads) or a one time purchase of $1.99 (bringing the game to an ad-free premium level). This respects both “play a few rounds and un-install" players and those who will keep Don’t Let Go amongst their devices rotation. I fall into the latter camp. Overall, Don’t Let Go is an easy recommendation that truly has potential for greatness; if the future is one in which the developer chooses to expand and pad out content. But even as it is, stripped down to just its core mechanics and aesthetic, Don’t Let Go is still worthy of an installation. Falling hopelessly into an oblivion has never been this much fun.