On a long enough time line, your chance of making a video game that doesn’t piss off a video game curmudgeon falls to zero. If you travel that same time line as a gamer you’ll find you yourself will have some gripe that becomes a high water mark for your frustration with the industry. I had mine back in the late 90’s when 3D games started to become more and more prevalent and detailed 2D artwork started to take a backseat. I’ve long since relinquished my ire but I reserve a place in my heart for the craft and care a beautifully produced 2D game can weave together.

Enter Earth Atlantis($2.99). I’ll get it out of the way right now, this game is a submersible Metal Slug. If you’re not familiar with that particular title, when people talk about 2D pixel games in a positive light you can thank Metal Slug, the godfather of pixel art. When they talk about it in a negative light, it’s usually because it doesn’t measure up(or maybe they aren’t familiar with Metal Slug). Cast upon a beige/brown scale palette, Earth Atlantis seems to exist to lure you back in time to those halcyon days when you were only capable of two axis movement.

This is a game based in traditional bullet dodging ship flight shooting. Games like Phoenix 2(Free) and Sky Force Reloaded(Free) have paved the way for games like Earth Atlantis that want to take your classic shooter game and turn in a new direction. In E.A. you pilot a submarine that is on a mission to eradicate small and large creatures of the deep in a post apocalyptic aquatic landscape. seascape? whatever. Once you select your vehicle, you are dropped into a winding maze of tunnels that must be navigated to reach and defeat major threats that sequentially spawn anew as old ones are eliminated. 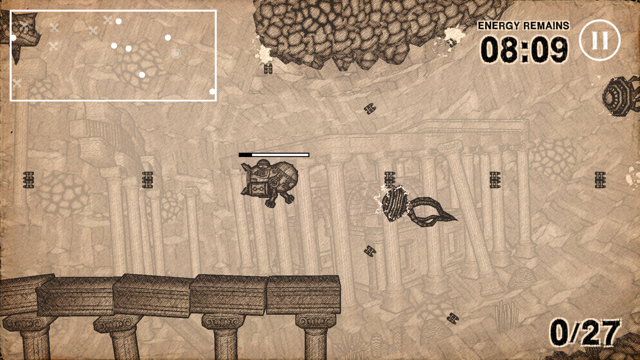 Controls are very basic and lend themselves very well to your basic M.O. dodge bullets, kill enemies, and find new enemies. The left side of the screen functions as a d-pad with well tuned directional movement. The only other action you can take other than movement is to flip your front face from left to right and vice versa. Auto-fire is always on and you don’t run out of bullets. This leaves you with very little overhead while you are in the midst of the multiple sprays of projectiles most of the bosses will dump out at you in your fights.

My first impression of Earth Atlantis was that of a beautifully submersed labrynth that, unfortunately, ended up getting tedious to traverse. The high points to me are the boss fights and sub-unlock fights that not only provide more complex dodging patterns, but also stunning background peices that teem with bio-mechanical life(that do sometimes seem to be summoned to the foreground and join in the fight) and a break from the normal rocky tunnels you spend most of your game time in. 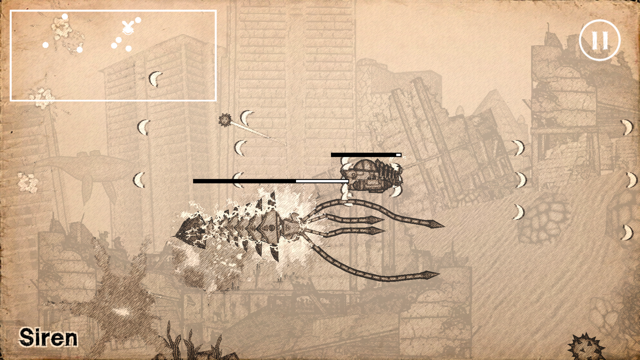 As you collect power ups, your weapon systems become more formidable and it usually only takes a few minutes to be in shape for a boss fight. There are two game modes, Quest, which is the standard, and Hunter, which requires you to have cleared Quest mode once in order to unlock. Hunter has a timer attached and more time is added by picking up buffs left by vanquished foes. It almost accomplishes what I want most in this game, a speedier version that doesn’t rely on an intimate knowledge of the game map. While you do feel a greater sense of urgency, you will still get stymied by numerous dead ends and false trails that divide the map up. I like the explorational flavor that Earth Atlantis brings to a genre known famously for a simple scrolling screen devoid of navigational choices, but an alternate mode that celebrates the purity of movement solely for the benefit of not getting shot out of the… sea… would just make this game top rank to me. Another big improvement that could be made for this game is increased advancement options. Unlocking all 4 ships in the game happened after about 2.5 hours of gameplay for me and I have taken out a little more than 80% of the game’s enemies after a few more hours of gameplay. What keeps those other games fresh is new ships, heavily scaling upgrades and enemy power levels which this game does not currently have.

All told Earth Atlantis is a lot of fun. While it is not a game you could spend 30-40 hours in currently, it has the components for expansion to that scale. It really hits a great stride once you get a few hours in and have the majority of the map memorized and still have a few bosses to defeat before unlocking Hunter mode. This is also a good game to share with a kid as most of the tunnels are safe enough for a kid to navigate and you can switch in for the more challenging boss fights. If you are a fan of pretty games or spelunking or just a good old bullet dodger, you’ll want to pick this one up!