Welcome to the SwitchArcade Roundup for June 6th, where we’re covering the latest releases and news for the Nintendo Switch. Let’s start by talking about recent release, This game definitely takes influence from the original Legend of Zelda. I’m surprised there isn’t a “It’s dangerous to go alone!" reference when you pick up the sword in the cave on the beach you wash upon. The influence is particularly with its dungeons that you can theoretically find and explore in any order. For example, I didn’t pay attention to the map and found myself in the fourth dungeon, and played through most of it, having a hard time, until I decided to escape and regroup, perhaps get some healing items. Then I saw that I skipped way ahead from the first to the fourth dungeon! Returning to it made my life easier, as I had more health and new tools to deal with enemies.

Watch Songbringer on Switch with Carter from TouchArcade on www.twitch.tv

However, Songbringer avoids the grid-based feel of many 2D Zelda games in the overworld, despite the world’s grid-based layout. The combat is more open, and feels more like it’s 360 degrees of game, rather than being about lining things up perfectly. It’s contradictory, but it feels both like Zelda and like its own thing at the same time.

I really enjoy the bombs in Songbringer, in part because you get so many of them. And also because they’re so powerful. They have a long fuse time, so you can’t just use them with impunity, plus they will hurt you. But not only do they serve a role in advancing, but they’re a proper weapon to go along with your sword. Not to mention the top hat that you can throw like a boomerang at enemies. Fun, fun stuff.

Songbringer is procedurally-generated, and features a roguelike mode to go along with its main adventure. That primary mode still features the ability to play through a random world, but with a six-character seed that you choose. I did choose CARTER, of course, because why not. I like this as while other games let you play specific seeds, they’re often long, incomprehensible strings of characters. This lets you more easily share your specific seed, and even makes the “name your character" feature from Zelda games play a significant role here, even if your character, Roq, still is named Roq. And the story is interesting, as there is a whole sci-fi element with traveling through space and landing on a strange planet, mixed in with fantasy creatures and mythology that Roq might just have a strange connection with.

While there are several Zelda-like games on Switch already, Songbringer does a lot to stand out as its own particular thing. Plus, the game comes with free The Trial of Ren DLC, featuring a new combat-focused dungeon and some new items to play through. If you want a highly-replayable Zelda-like game on Switch, I recommend Songbringer.

If you haven’t pulled up the eShop in a couple of days, you might not have seen that the shop got a bit of a redesign. These are the sections now:

Nintendo’s addition of the Featured section should help show off some titles that are good, but didn’t quite get into the Best Sellers section, and also to promote Nintendo’s own releases, as they are doing. At least they aren’t giving top billing to like, Breath of the Wild, because I think that game has enough exposure. 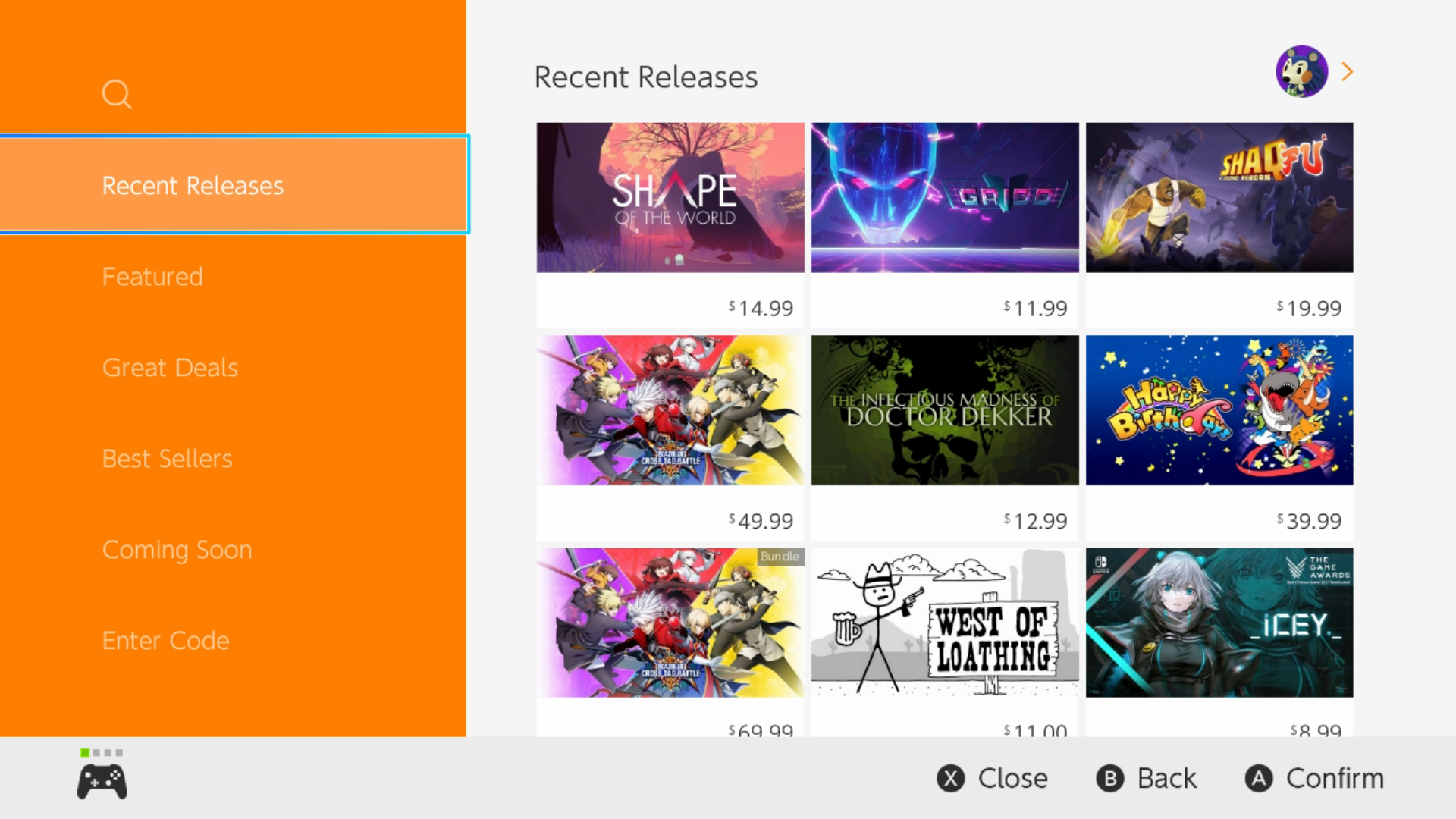 However, while “Recent Releases" and “Great Deals" are the same as the “New Releases" and “Sales" sections previously, the wording on each section is now subjective, rather than objective. Nintendo could wind up not listing every single game that gets released now, though hopefully they do not, and use Featured to call out the best new releases. However, I wouldn’t necessarily blame Nintendo for using “Great Deals" as a way to only show he best sales. If you track eShop sales, you know that some sales are limited discounts, not worth the money. Some publishers are using sales as a way to get exposure at minimum cost. Hey, I respect the hustle, but it does clutter up the section. Nintendo might be letting publishers continue to manage their sales on games, while preventing publishers in the long term from just misusing the section.

Freedom Planet is coming to the Nintendo Switch eShop this fall!

A big thank you to @XSEEDGames and @matpow2 for making this possible and to @kjbionicle for the rad new box art! 🐲🐱🐶👽⛵️ pic.twitter.com/kdQAqnlLkV

Remember de Blob from the days of the Wii? The game about playing as a giant blob, painting the town a whole bunch of different colors, is getting a fresh coat of paint (ayyyy) and a Switch release on June 26th for $29.99. Sure, this game saw release on a bunch of different platforms afterward, but it’s time to come on home, de Blob.

If you never played Mother 3, I don’t blame you, as the only way to play it in English is through a rather well-done fan translation patch. But it’s a great RPG, and you should track it down at some point. Mother 3 director Nobuyuki Inoue and artist Nobuhiro Imagawa are working on Work x Work. The game involves not only a prince trying to defeat a demon king, but a theme park worker exploring dungeons. Sure, that sounds interesting! Hopefully we see Work x Work come stateside sometime.

Another World releases on June 25th

DotEmu, the studio that does gobs of ports and emulated games for a ton of platforms, is releasing Another World on yet another platform: the Switch! On June 25th, Eric Chahi’s classic sci-fi adventure game makes its way to the Switch at last. If you want to play one of the biggest cult hits of the 1990s on yet another platform, here is your chance!