I’ve come to really look forward to the couple of times a year that Square Enix dives into its back catalog and pulls out a treasure for mobile audiences. It was great enough when we were getting vintage Final Fantasy and Dragon Quest games, but now that the company is having to dig a little deeper to find suitable candidates, things are really getting interesting. It’s not as though we haven’t seen Valkyrie Profile before, mind you. It’s had a couple of prior releases, and unlike Romancing SaGa 2, this game was localized into English each time. The game was originally released on the PlayStation and got a re-release on PSP, but neither version is readily available anymore. Indeed, this mobile version is the first digital release of the game as far as I know, and for that reason alone it’s quite welcome.

The PSP version serves as the basis for the mobile version, similarly titled Valkyrie Profile: Lenneth ($17.99). That remake was done by the prolific shadow developer TOSE, and like many of its ports it had a few issues that kept it from being all it could be. The loading times in particular were widely criticized, something that obviously isn’t an issue in this mobile version. There are other improvements here as well, especially in the sharpness of the visuals. Perhaps the best improvement over the PSP version is the ability to save anywhere, which is a virtual necessity for handheld RPGs as far as I’m concerned. This version also comes with some IAPs, which seems a bit audacious of Square given the premium price tag. Those IAPs more or less amount to an assortment of cheats such as double experience points and the original difficulty balance hasn’t been altered, so it’s not a huge deal. But they are there. 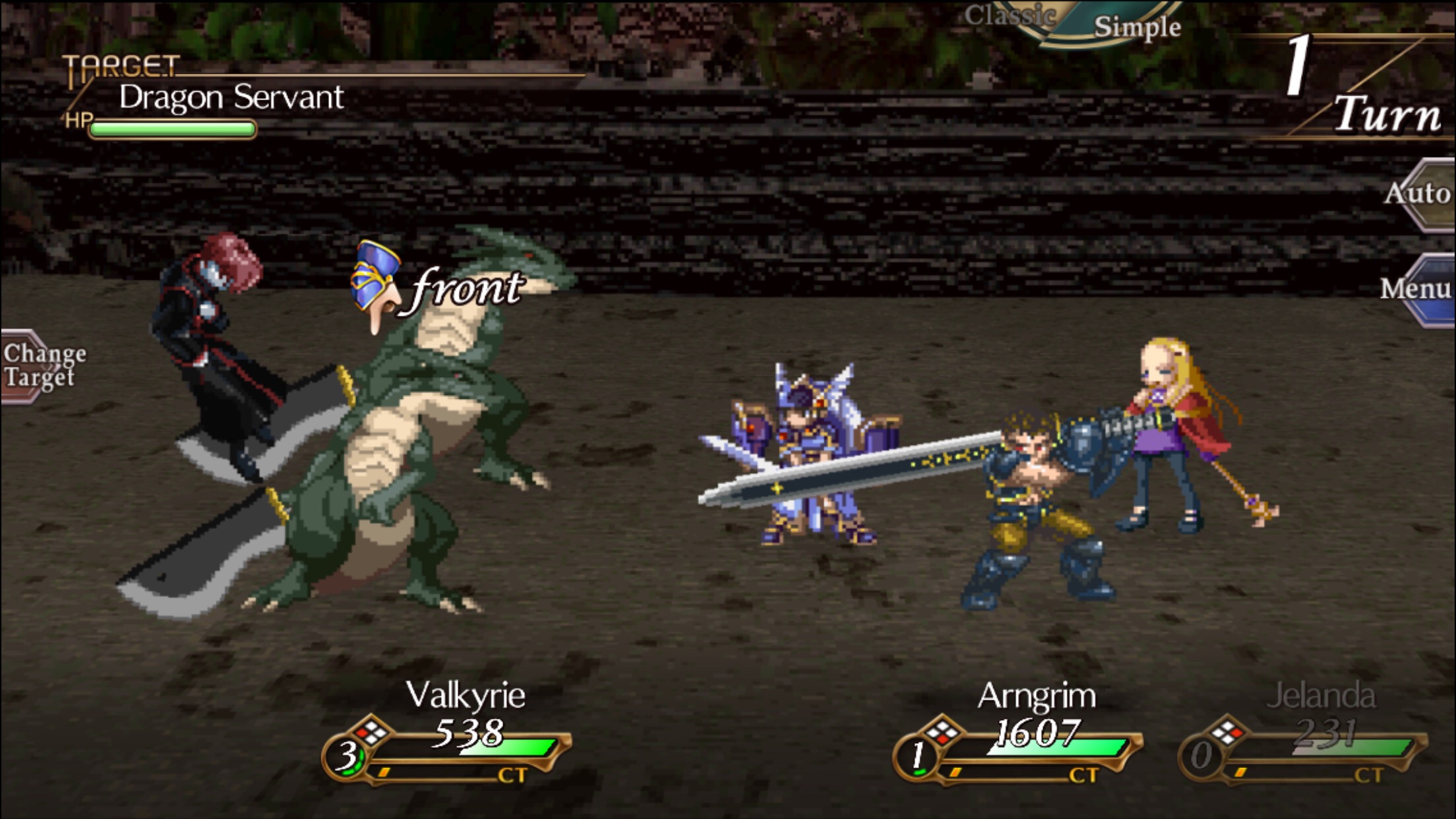 A bigger issue with this port is something that was going to be a problem no matter how good of a job Square did with it: the controls. I’ll go into greater detail about the game itself shortly, but suffice it to say that Valkyrie Profile has a fair bit of platforming in it. The game’s virtual controls work well enough most of the time, but in situations where you need to do precise jumping, they’re just not up to snuff. If you have an MFi controller, you can use that to get around the problem, of course. Thumbs up to Square for including that support. Otherwise, you’re just going to have to be very patient. Very, very patient at times. This could have been mitigated if Square wasn’t so married to floating virtual sticks these days and allowed the player the option to use a fixed stick, but even then, some people would likely still find this tough.

At any rate, it’s a solid enough port even with those issues. In the technical sense, this is one of Square’s better mobile ports. There’s no strange filter smeared across the screen, no odd stretching or distortion of the picture, and no compromises in the content. The interface has been totally redone with touch controls in mind, but if you don’t care for that method, you can play with a more classic set of virtual buttons. As long as you can deal with the minor frustrations that spring up from the touch controls or have an MFi controller, this is quite a nice version of a game that can be awfully expensive to pick up otherwise. 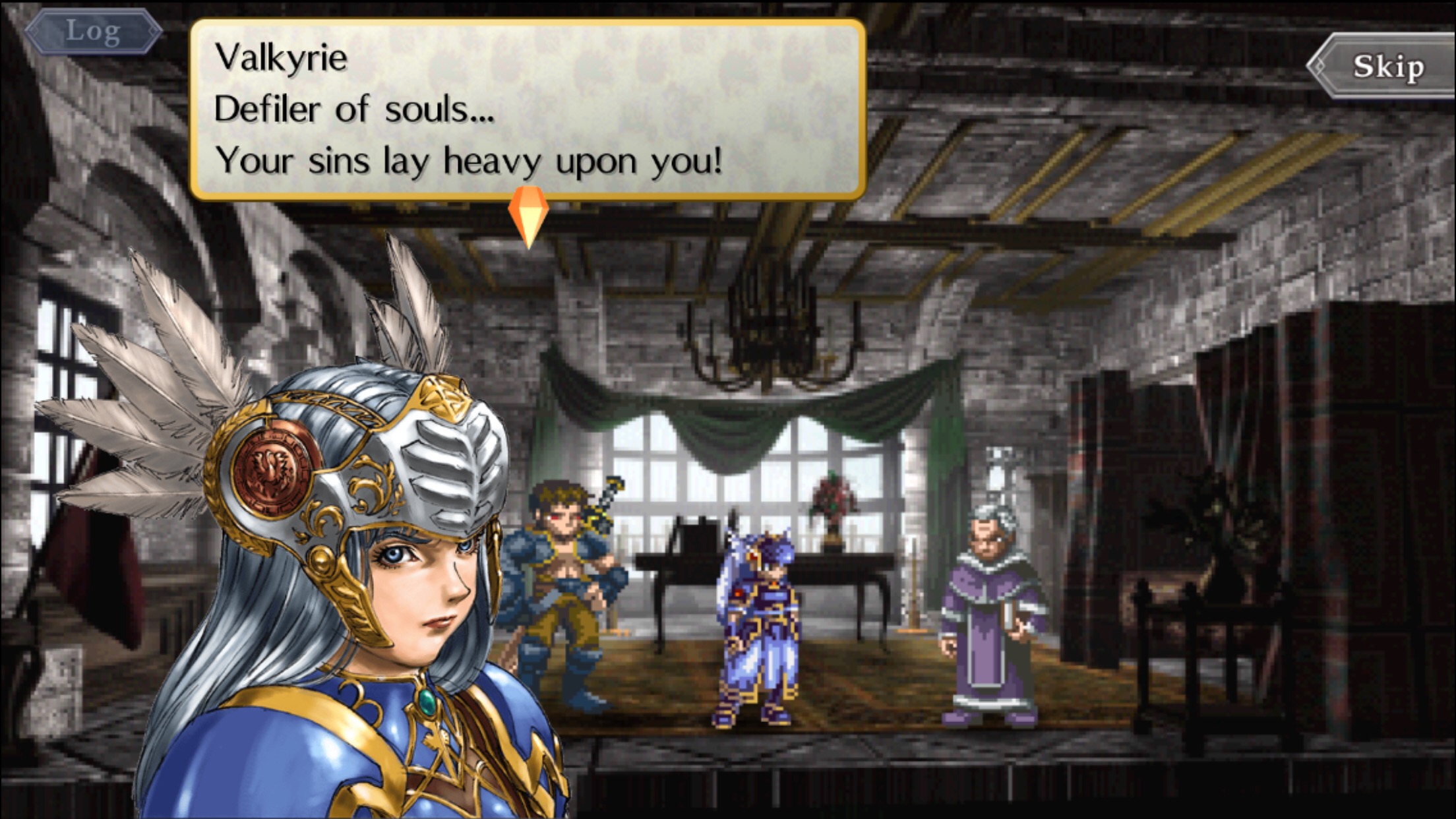 Now then, the game itself. Valkyrie Profile originally released on the PlayStation during what was, in hindsight, one of the best periods for Japanese RPGs of all kinds. It was an era that had a ridiculous surplus of high-quality traditional JRPGs and some incredibly original, quirky ideas that went in some truly new directions. Valkyrie Profile is one of those oddball titles, a game that married some amazing spritework with a great story and unusual mechanics. You play as the Valkyrie Lenneth, tasked with helping to prepare for Ragnarok. You’ll do this by gathering powerful souls to become Einherjar, training them, and sending them up to Valhalla to join the fight in that final battle. There are multiple endings, and which one you get will depend on how well you do your job.

To tell the truth, this game is a little easier to explain than it once was. Its unusual battle system was almost wholesale, er, “borrowed" by A-Lim for its Brave Frontier and Final Fantasy: Brave Exvius social RPGs, so if you’ve played either of those, you’ll already know the basic idea. Tap the appropriate button to launch a character’s attack. Each character’s move will come out at a slightly different speed, and if you time things correctly, your party members will join their attacks into a combo. Finish things off with an awesome special attack, collect the loot, and that’s the battle. Some enemies will guard, requiring you to use a combo to break through their defenses. You can also use magic or items on a character’s turn instead of attacking. It’s a fun, active battle system, and if you happen to get bored with it, this version allows you to turn on auto-battles to speed things up. 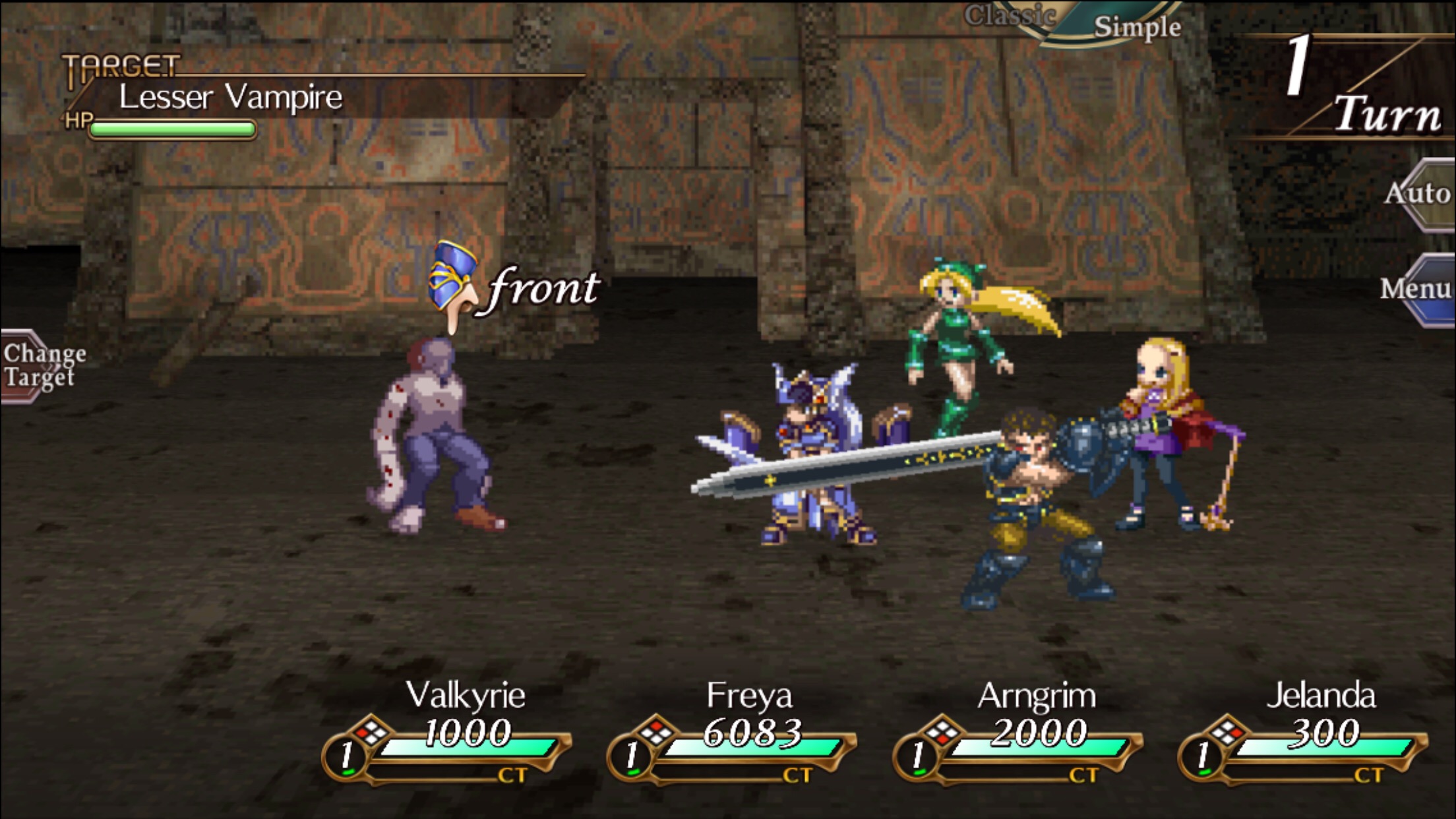 As for the structure around those battles, it’s also a little strange. Towns and dungeons are explored from a side-scrolling, profile perspective (this is where the title comes from). Areas are generally made up of multiple planes, and you’ll travel between them by pressing up or down at certain spots. There’s also a vertical element, as the Valkyrie can and must jump to make her way through most areas. You can also swing your sword, which is useful for engaging battles with the visible enemies or triggering certain events. The Valkyrie can also shoot out ice crystals that can be used to freeze foes in their tracks or, more often, to create stepping stones to move forward or reach treasures. Since they’re made of ice, these crystals will shatter pretty quickly if you stomp around on them, so it’s important to step carefully.

Anyway, you explore towns, travel out to dungeons, meet new characters, recruit some of them, train them up, find or craft new gear, sniff out magic books, and so on. Each trip to an area uses up some time, and when enough time has passed the story will move forward a little. You’ll have to choose one or two warriors from your party to send on to Valhalla, with certain characters being given narrative excuses to stick with you to the end. At the end of each chapter, you’ll be called up to Asgard, be given an update on how your Einherjar are faring against the Vanir, and be given a reward for the warriors and treasures you’ve chosen to send. After around 30 hours of gameplay, you’ll head in for the final event, well-prepared or not. 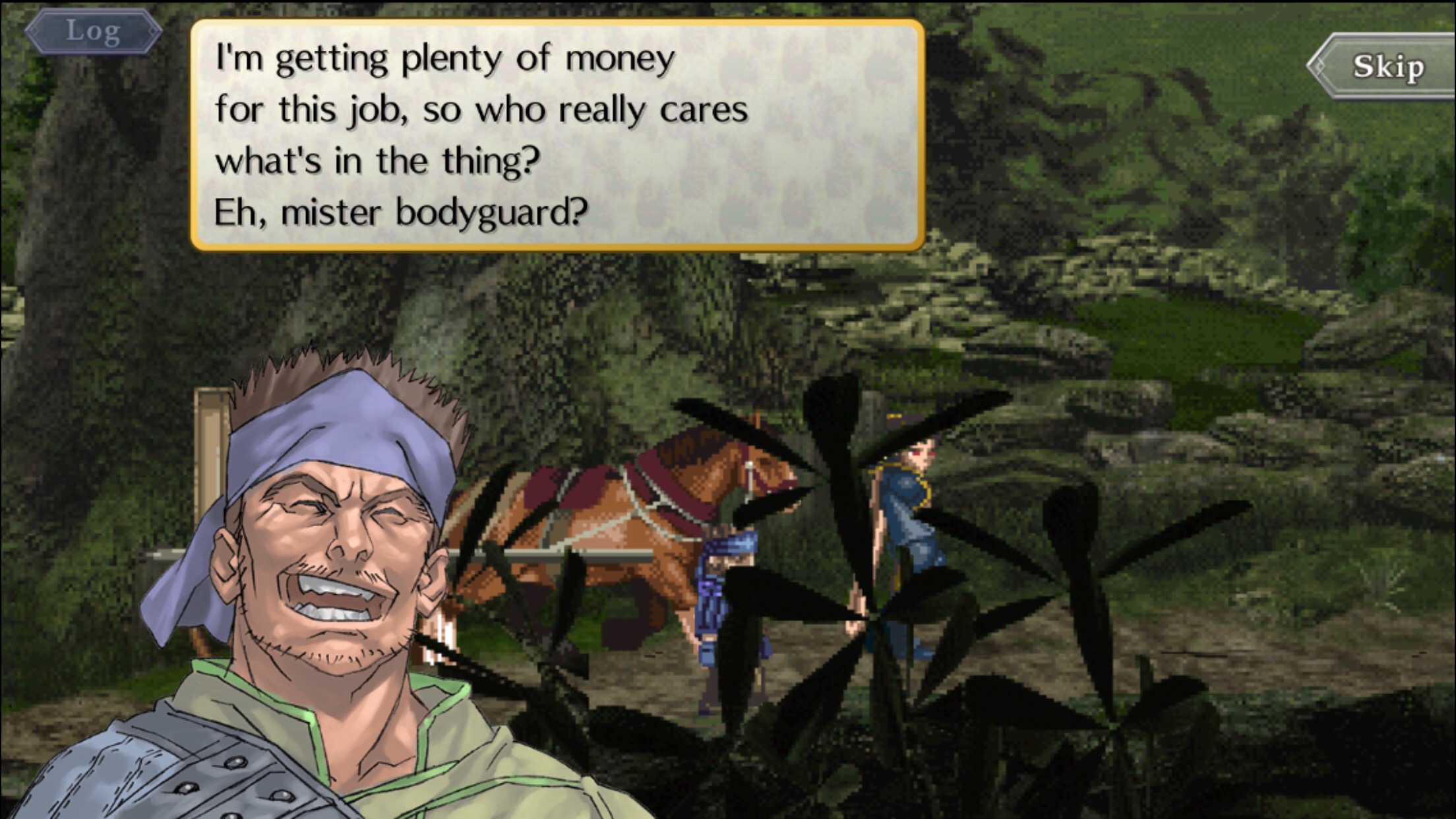 It’s an interesting system because you have to balance your personal needs for your party against doing your job of sending the best of the best to help Odin. There are more than 20 characters you can recruit, which means you’ll always have more than enough to form a good party from. It also means that Valkyrie Profile offers some options for your inevitable second or third playthroughs to reach the other endings. Simply send some different characters up to Valhalla on your next playthrough, use a few you didn’t use much before, and you’ve got a nice bit of novelty to enjoy as you try to get the best ending.

Valkyrie Profile‘s story is fairly interesting on its own, but the excellent character work is what really makes the narrative sing. As you would expect given the premise, you’re going to be witnessing a lot of tragedies, and seeing how each character deals with those situations is quite compelling. This version is still by and large using the translation and voice acting from the original PlayStation release, which makes it feel a bit dated in places. Or nostalgic, depending on how you view things, I suppose. Even with that in mind, it’s still a fascinating setting and scenario to play through. The way things unfold in the long run is really interesting, and if you haven’t played the game before, you’ll enjoy some of the surprises and twists you’ll hit along the way. 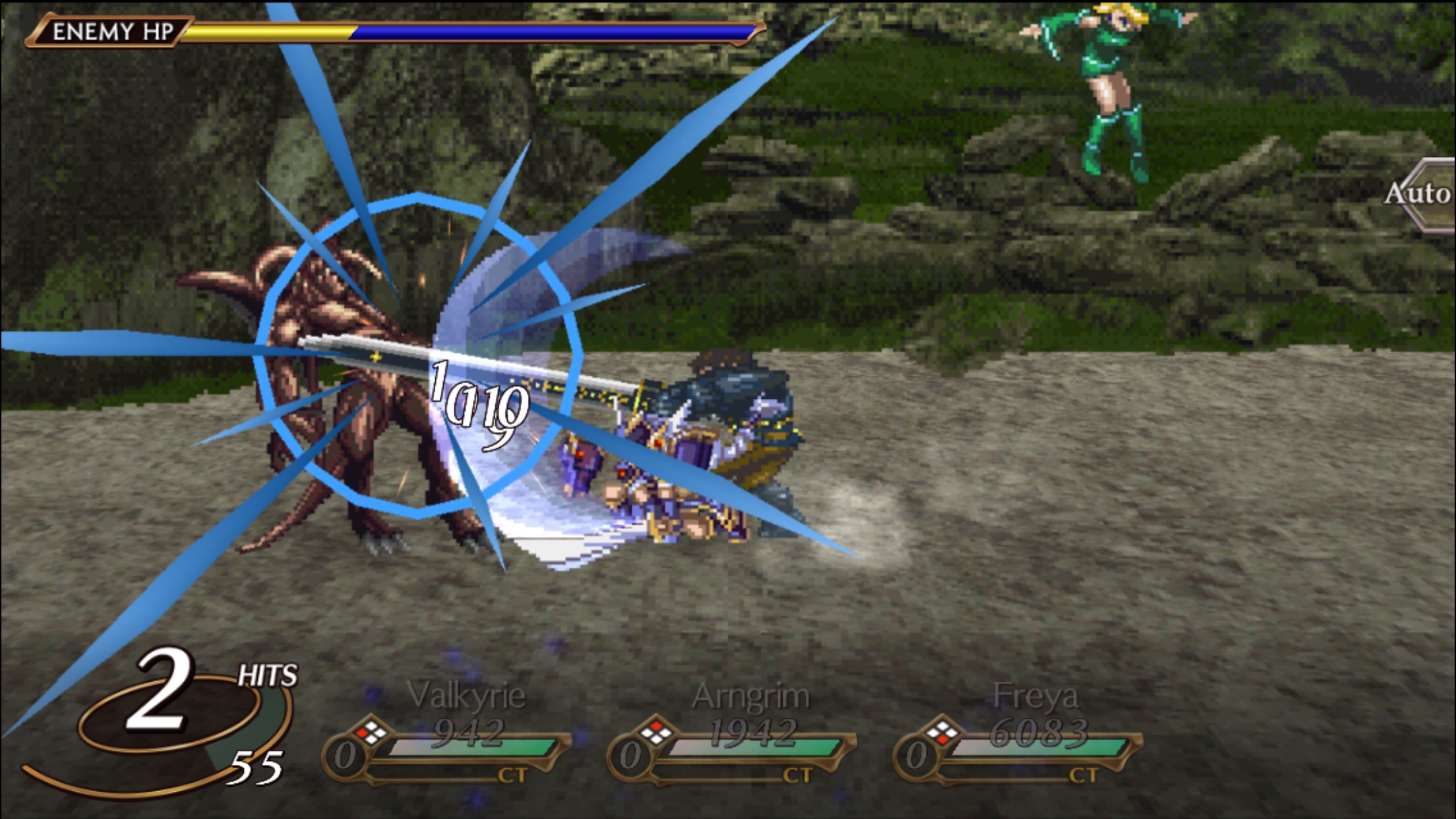 There’s really nothing else out there that is quite like Valkyrie Profile, and that’s as true today as it ever was. It’s both the game’s most compelling quality and the most frequently-cited reason people are turned off by it. You’ve got platforming, some unique RPG-style battles, and resource management all wrapped up with some astounding spritework, a stunning soundtrack, and a genuinely fresh story. It asks a lot of the player early on, but it’s worth sticking with it until it sticks. This port is superb in almost every respect, but if you don’t have an MFi controller, you may find the virtual controls to be a bit of a bear at times. Still worth it? You bet.