Can you believe it’s been four weeks already? Welcome to another Arena of Valor weekly round-up! Things have worked out pretty well for AoV players this week, from big new features to new skins, and from a new hero to some more news of the Nintendo Switch beta. Let’s take a look!

If you’ve logged into the game this week you’ve likely noticed a slew of big changes – unless you have a track record of not noticing those kinds of things unless they’re pointed out to you (like me). With TouchArcade going down for its own redesign last Friday, we couldn’t talk about the May Version Update delay until the following Monday; by which time it had already been released.

So if you happened to hear of the delay, miss our own delayed round-up and haven’t logged into the game since last Thursday, we’re letting you know that the update landed on Saturday after some downtime. Weird that they couldn’t provide a release day when it was only really two days away, huh? 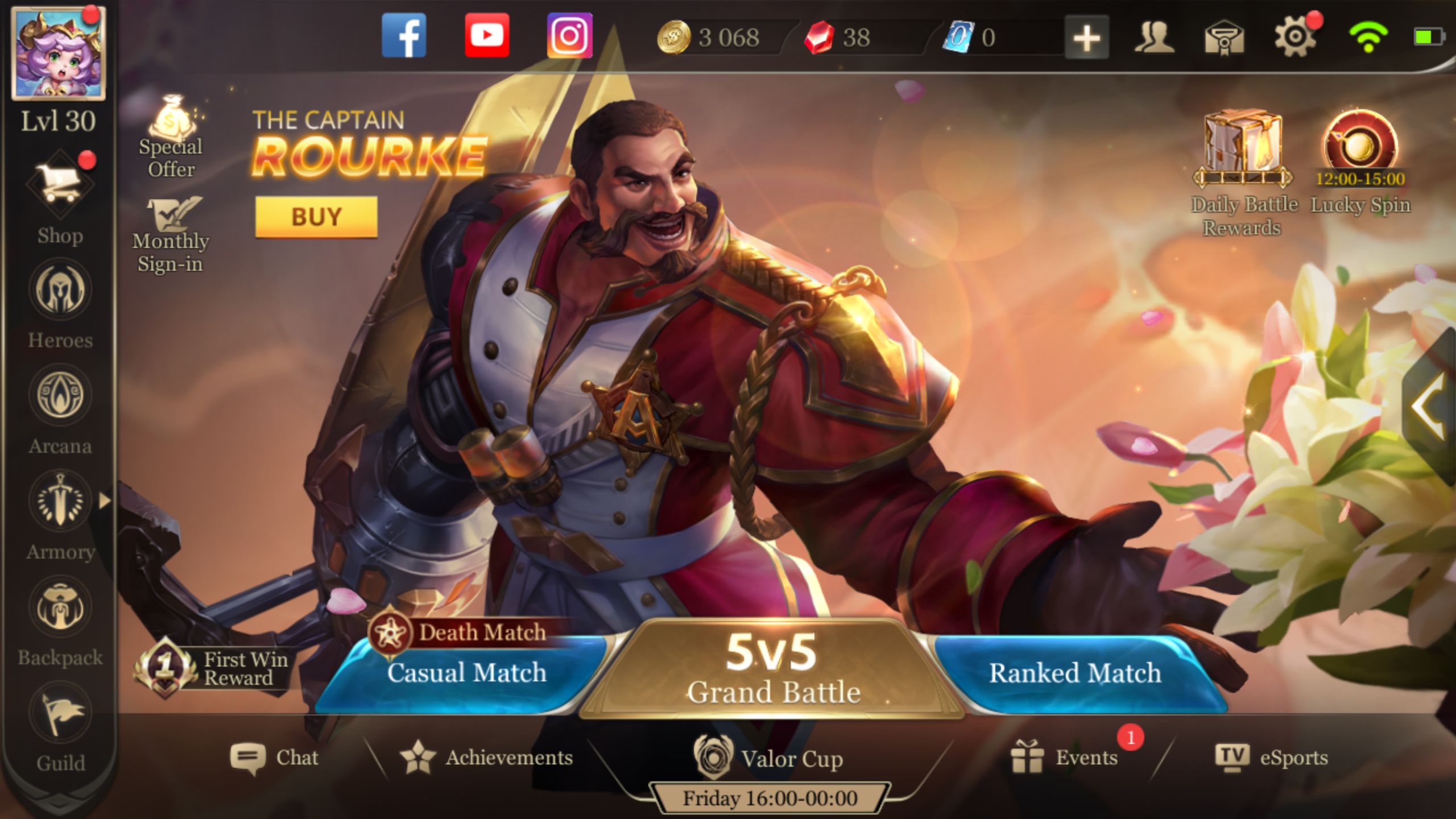 With the May Version Update landing on the Saturday after a minor delay, there was still the question of a missing feature – Monthly sign-in rewards. The update promised to reward players for logging in each day of the month in a cleaner way than the confusing and rapidly changing Events page used before it. But logging in on the first few days of the update and it was clear that this hadn’t come into play just yet.

Tencent, rarely being ones to answer such questions, remained silent. Log in today, however, and you’ll see that familiar calendar reward sheet you’ve likely come across in a bunch of other mobile F2P titles. You’ll obviously earn the most amount of goodies from logging in every single day, but they’ll all add up to bonus rewards at the bottom of the page, too. Fatal Scythe Mina is the focus of this month’s log-in event, but you’ll need 120 shards to claim the skin as your own.

Some quick math shows that logging in on the Mina shard reward days won’t be enough to win her over, so expect to be logging in for around 21 days. This way you’ll get a maximum of 133 shards if you hit each shard day, meaning you’ll be able to miss a couple shard days if necessary. 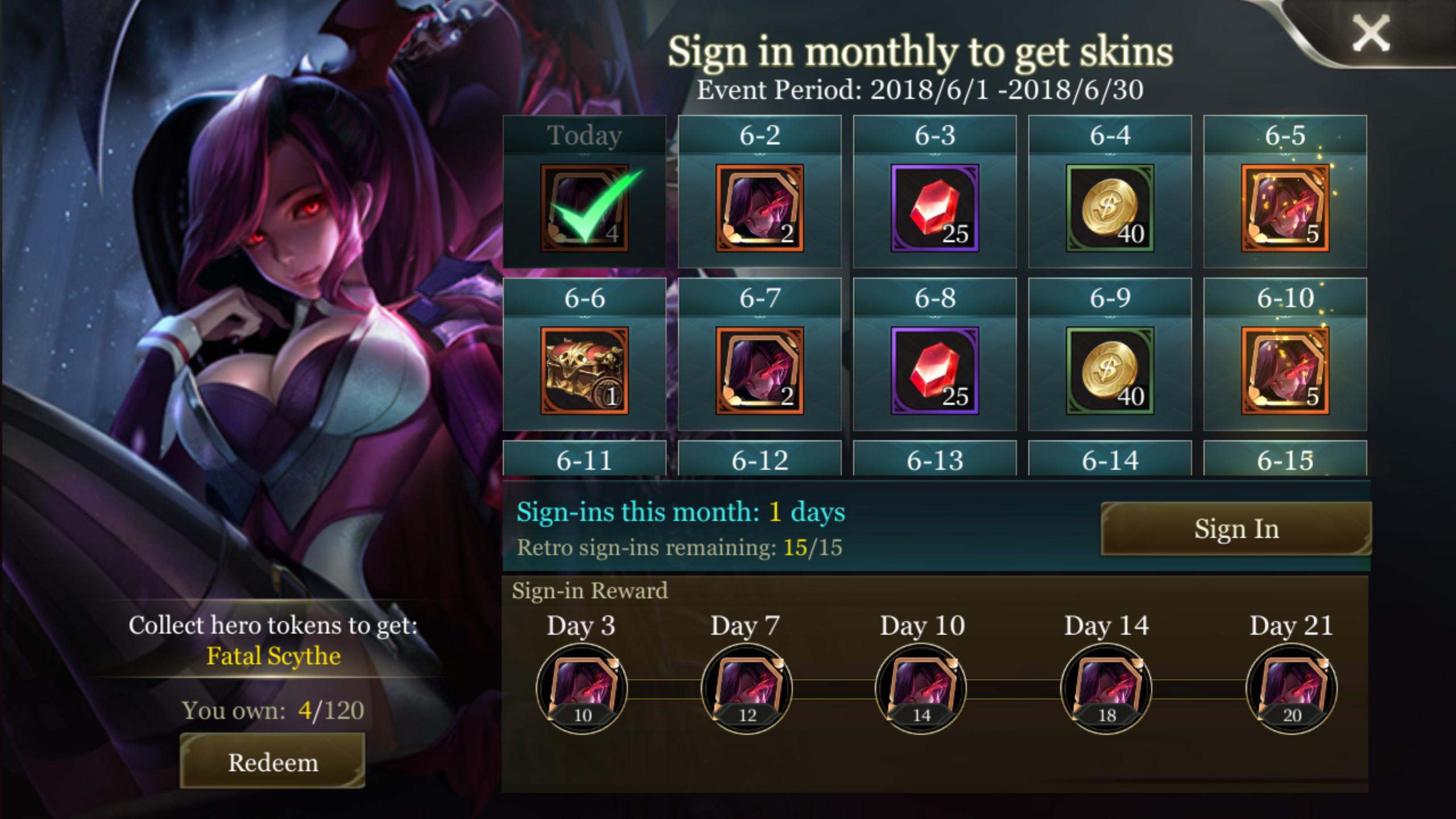 Likely to be the biggest news of the last few months, a spontaneous tweet from the game’s official account let players know yesterday that it’s finally time to sign-up for the Arena of Valor Nintendo Switch beta.

The hundreds of thousands of viewers who tuned into the August Nintendo Direct were told that Arena of Valor – which wasn’t well known outside of Asia at the time – would be coming to the Nintendo Switch with a beta planned for ‘Winter 2017’. Then… we heard nothing for many months. Cutting time incredible short (as Tencent do) they announced beta sign-ups shortly after Christmas, with the beta going up for those lucky few around a month later. Just as America had been made to wait for the mobile version of the game over their European friends, so to would they have to wait for a Nintendo Switch beta, as service was locked to Europe only.

But that’s no longer the case! Both Europe and North America (plus Canada and Mexico) can try their luck this time. We likely won’t know when the beta is set to go live until the last minute, but the FAQ suggests that it will run for around 2 weeks when it starts up. Those who managed to get in on the last beta will be able to jump straight into this one by simply booting and updating the version they used back then. Didn’t get in last time? Then you’ll need to sign up here. 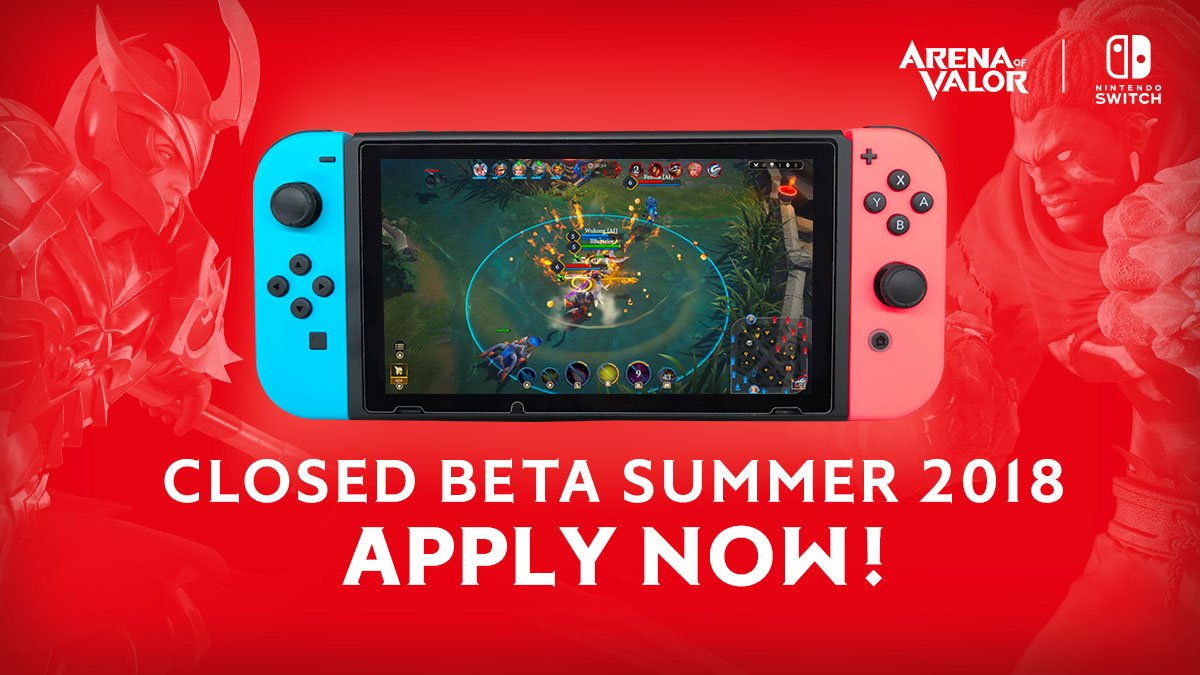 Keen-eyed players noticed a new face in the shop this week way ahead of any official reveal. Rourke ‘The Captain’ slid his way into the system, letting anyone and everyone check out his character page and give him a test drive in the Hero Trial arena.

Eventually announced through the proper channels, Rourke arrives today, June 1st, with his default and alternate skin – with a voucher discount available to those who want to pick up both. Long-time Arena of Valor fans have likely seen Rourke used as a mascot character on promotional artwork and log-in screen splashes when watching videos of the countless other versions of Arena of Valor available across the world. He’s one of many unreleased characters we’ve technically already seen, but he represents a fairly drastic change in our typical playstyle.

Rourke’s massive crossbow – which attaches directly to his damaged right arm – paints the picture of yet another ranged attacker. And while they may be true, it’s only part of the story. Rourke’s crossbow fires a spread of bolts with each attack, but it’s the center two that have the biggest kick. S Paired with an Ultimate which negates common control effects and a powerful shoulder tackle and you have a guy who just loves to get in close.

With Rourke potentially disappointing those who wanted yet another ranged attacker, one of the game’s most famous – Yorn – received a new skin on the same day. And an expensive one at that.

And that’s about all there is to say about that one. It’s just a skin, after all. 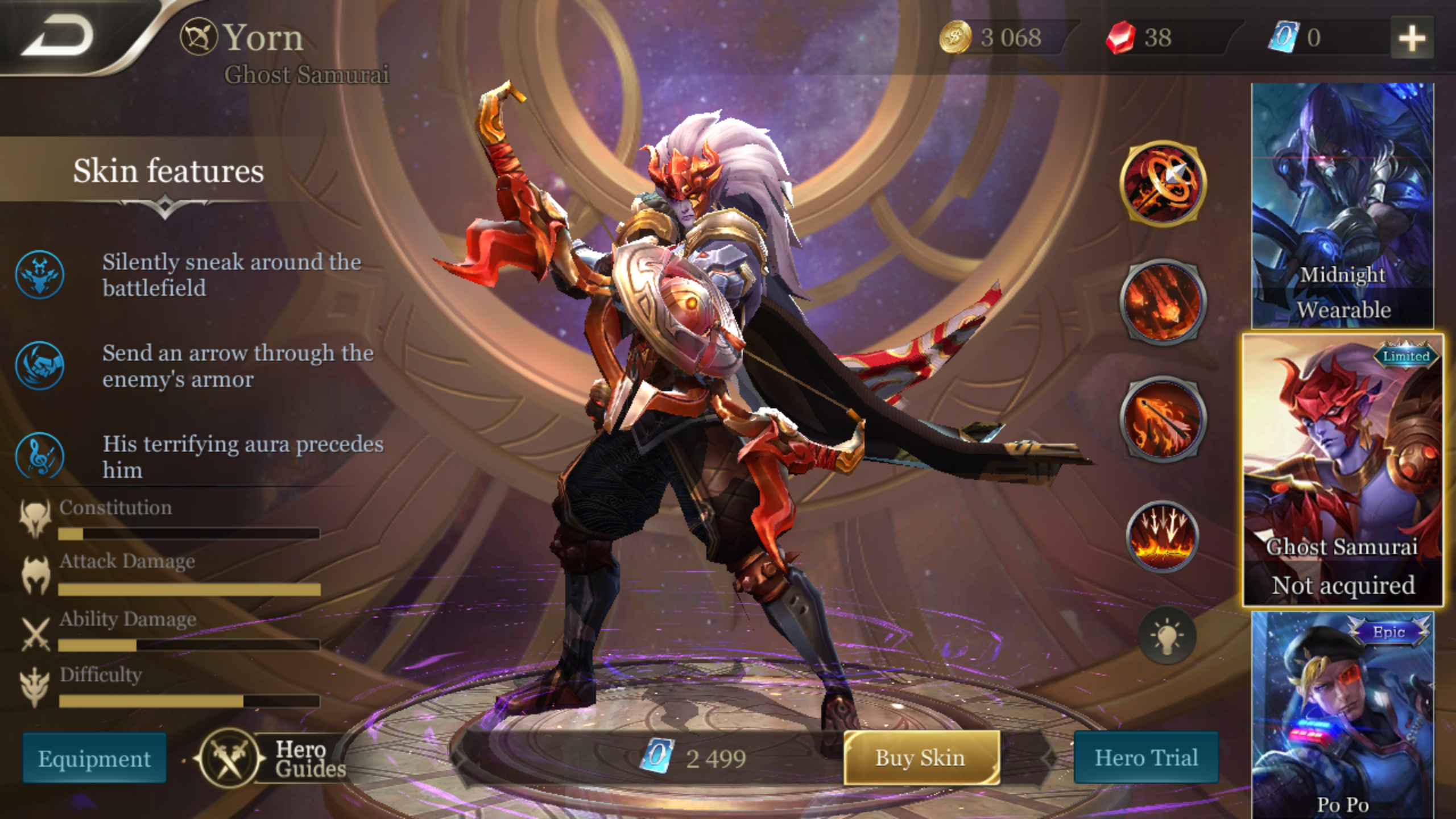