Aero Smash (Free) is the latest arcade style shoot ‘em up to hit the App Store. The game is very much an arcade game where the objective is to stay alive the longest and gain the highest score possible by shooting down enemy planes and objects on the hectic battlegrounds you will be thrust onto. You control a variety of flying objects that can be mostly classified as planes (although there is a flying pancake in there among other oddities), with additional flying vehicles that you can purchase or earn over time. You control your plane by tapping the left or right side of the touchscreen to move in that direction. However, the plane does a looping type of maneuver if you go too far to the left or right and it isn’t a direct control method by any means.

While you focus on moving your plane across the screen to avoid obstacles and enemies, your plane will be shooting automatically as well. The firepower will depend on the plane you have and upgrades because you gain levels over time and new abilities, however much of this is done through IAPs. 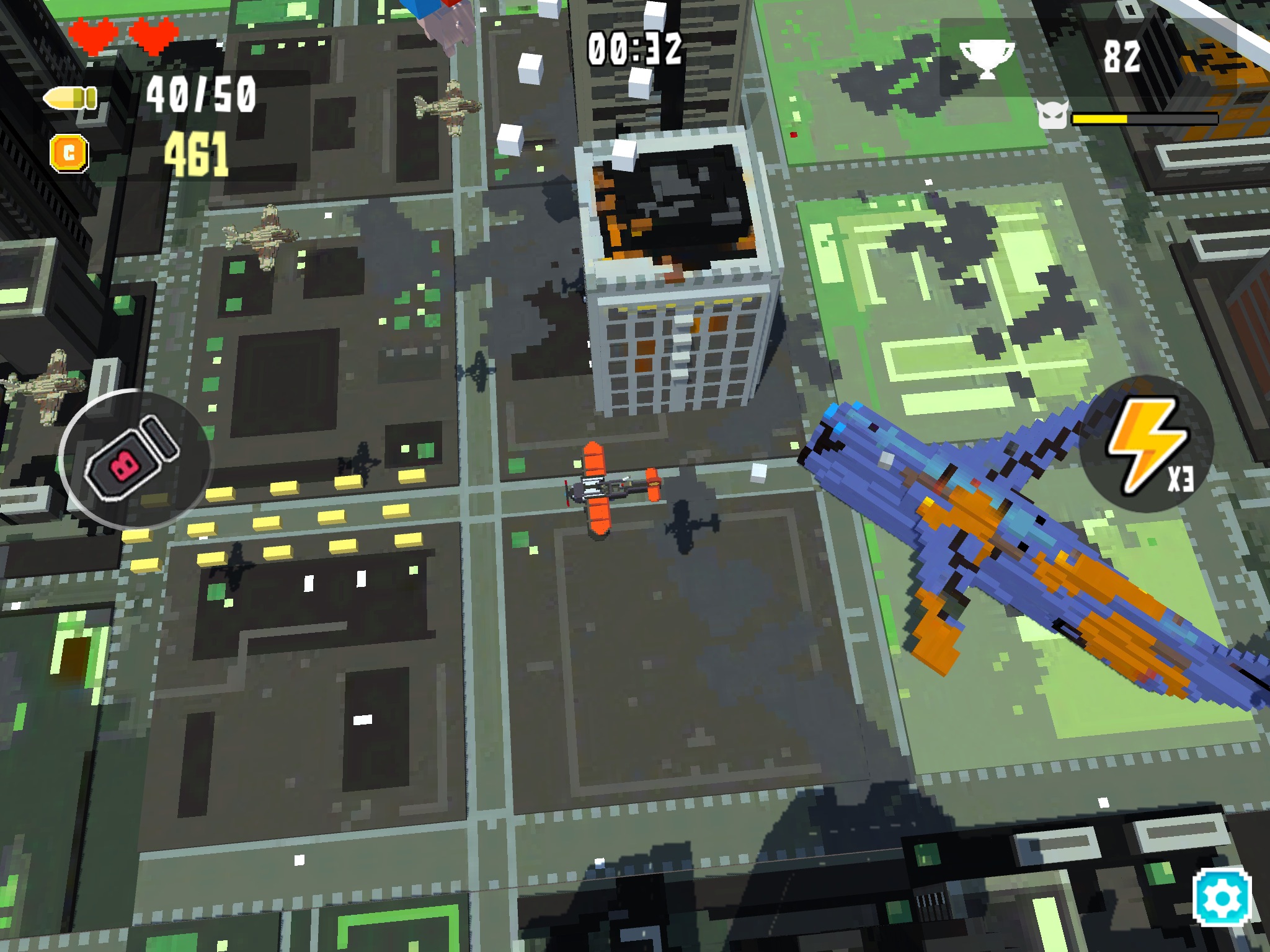 You have three hearts or hits before your plane blows up and you lose. However, you can continue once per stage and this will cost you either an ad (which I will go into below) or 100 coins. Coins and hearts are the main currency in the game and you can get coins by flying over them in mid-air during your battles. I am not exactly sure how the hearts are gained, but in general the better you do in-game the more you have unless you watch ads or make IAPs.

The game is free to play, but very IAP heavy. In fact, after a while you will run out of hearts to even play a game unless you make a purchase of nine or more of them, or wait for the timer to count down to zero on the main menu. Even then, however, you only gain one additional heart and it takes multiple to start a game.

The other thing the game does is it forces you to watch ads to continue your game after your plane blows up. You gain one continue like this on every map or level. You can pay 100 coins for it or watch a 30-second ad. You can also watch 17-30  second ads in order to gain additional hearts or coins from the shop menu. 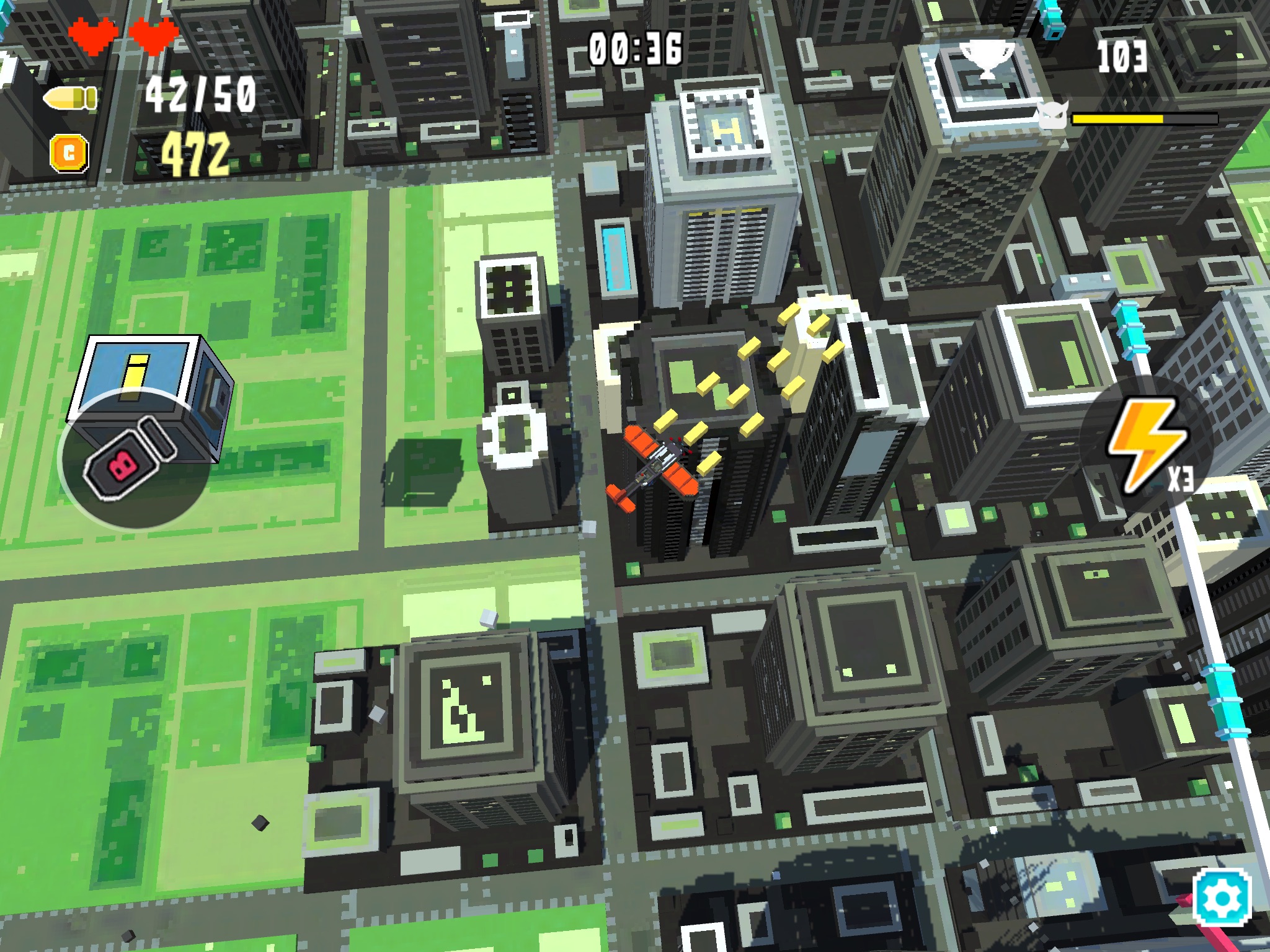 Although Aero Smash is very much an IAP and ad heavy game, it isn’t done in an overtly obtrusive way. Meaning, you will not see ads popping up on the main play screen as you shoot down baddies. I made a purchase of $2.99 (even though I wasn’t planning on it and tried taking a screen grab to which the game made the purchase for me as I have touch ID enabled) to disable ads, but the game still forces them on through various means (discussed above). I think the differnce after my IAP is that in order to use up my continue during a round, I can pay 100 coins instead of having to watch an ad.

Either way, unless you are a very skilled player, you will need to make some purchases for hearts or coins, especially if you want to upgrade planes or customize the game content. There is also a present feature that you can tap on from the main menu after a timer runs down to 0 and it will grant you some coins or hearts, among other prizes. 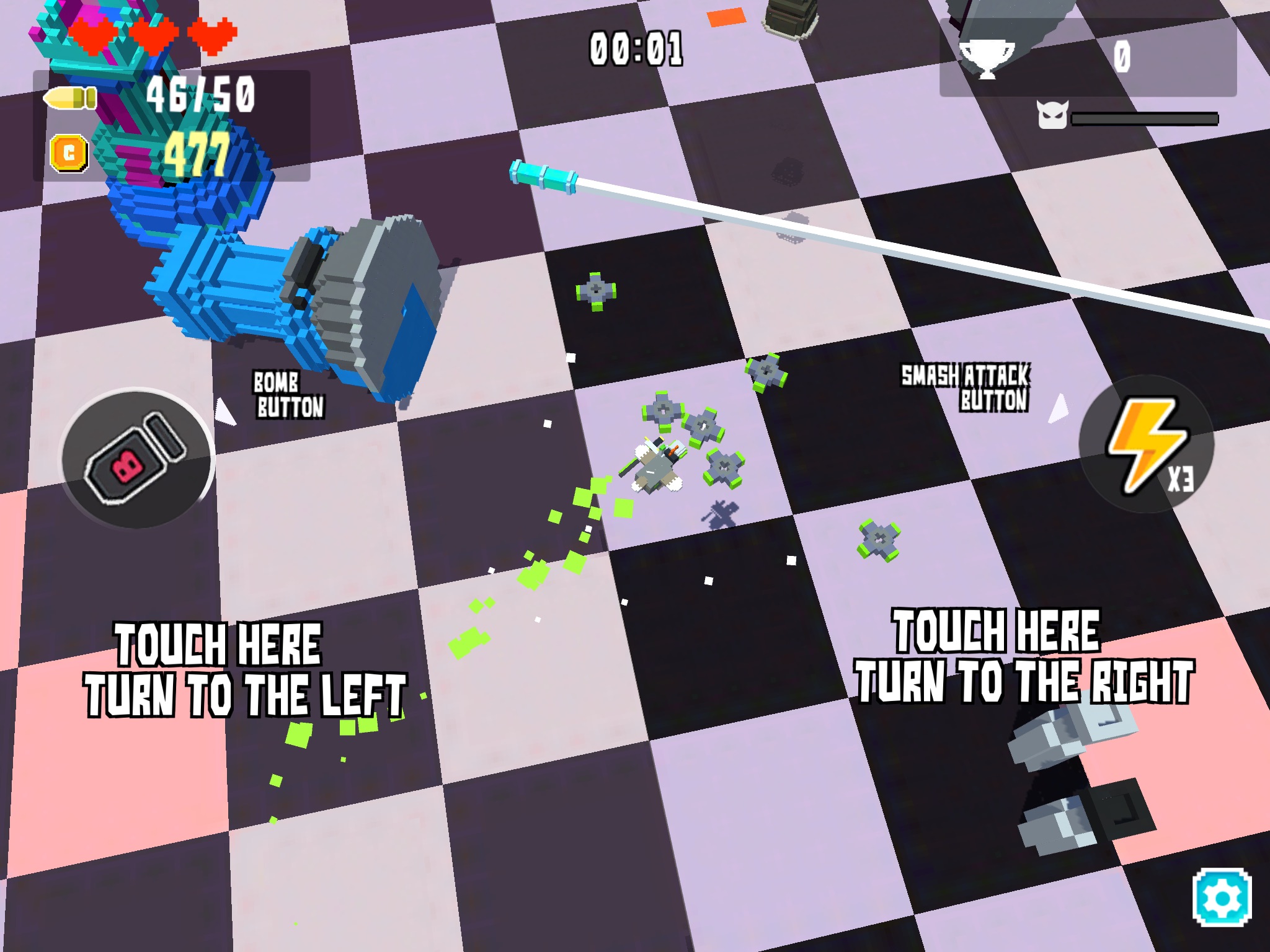 Getting back to the gameplay and presentation, Aero Smash is a very pretty game to look at. It has nice visual effects and bright colorful graphics. The graphics almost appear voxel-like with voxel style fighter planes of various sizes and turrets with homing missiles being the norm. The music on the other hand, isn’t anything to write home about. There are also a wide variety of levels that get picked randomly from the main menu when you press play. Some of them range from Star Wars-inspired themes with tie fighters and the like to themes similar to Capcom’s classic 1942.

On the upper right hand side you also have a gauge that fills up and when it does a boss will appear you will have to shoot down or avoid over a length of time as you gain the high score. It is quite difficult though to even get into a boss mode due to how many times you will probably die in mid level.

This is because the majority of bullets you have do not shoot at a constant rate, but in spurts. You also have a bomb icon you can click on and a lightning command (three per level). The bomb icon will send an ally plane (B-52 bomber) down to bomb the ground from above in front and help you take some enemies down while the gush command will make you fly invincibly and fast for a split second taking enemy planes in front of you down.

The game is frentic and can be fun if you overlook its downfalls in terms of an iffy control scheme and the IAP/ads it throws at you. The graphics and preentation is well done although there is no story to speak of. At the end of the day Aero Smash is simply an arcade experince at heart, and one that’s free to try out for those who are curious.