Are you a fan of Gradius or R-Type? If you are and enjoy pixelated and retro graphics, you definitely need to give Super Hydorah ($4.99) a try. This mobile release comes some months after the PC and PS4/Vita versions of the game which came out late last year, and offers everything a horizontal shoot ’em up fan would want. Super Hydorah is a horizontal shooter where you move in a trajectory toward the exit from the left to right side of a stage while avoiding obstacles, enemies, and missiles being launched your way. If you have twitch reflexes and enjoy feeling adrenaline or on the edge during your gameplay sessions, you will feel right at home with this game. 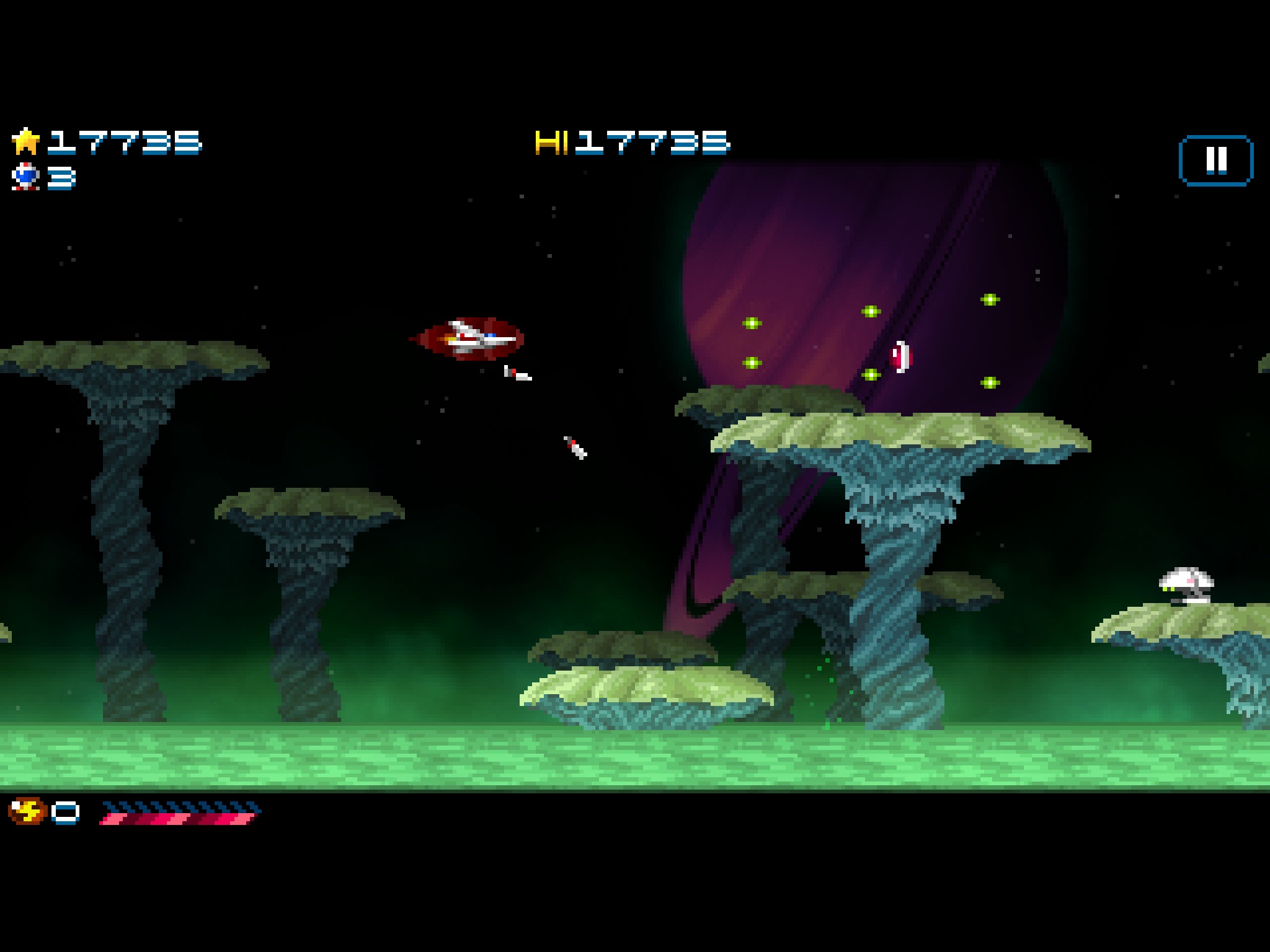 Your ship fires automatically in this version of Super Hydorah, so all you need to do is focus on the controls and avoid obstacles. You will have other things to consider, like customization of weapons, which I will get to below. Also, if you press on both sides of the screen simultaneously, your ship will stop firing. This may come in handy in levels that have things you do not want to shoot down or simply to ease the projectile clutter in busy firefights. The parallax scrolling works incredibly well and the game will have you zooming around levels at various angles. It is almost as if you do not exactly have to follow a set trajectory to the right, but can go in various directions or backwards if you feel like you have to (for instance to take out some turrets or enemies). However, it will really depend on the level as each level’s mechanics and layouts are different.

The game’s polish and presentation is second to none. The overall atmosphere will set you in the mood to keep playing as not only are the graphics very retro and pixelated in a good way, but the music is also well done. There are explosion effects and various tunes to zone out to — almost a techno-noir type of music straight from the ’80s. You play the role of a pilot and your task is to face off the alien threat. This short and simple storyline is presented at the initial cutscene, which is well done and very reminiscent of similar classics in the genre.Super Hydorah will set you back $6.99 on the App Store, and although that may seem steep for a mobile title, keep in mind you are getting a full port from the PC/console versions that are at least twice that price. Oh and the game plays particularly well on the iPad or larger iPhones. 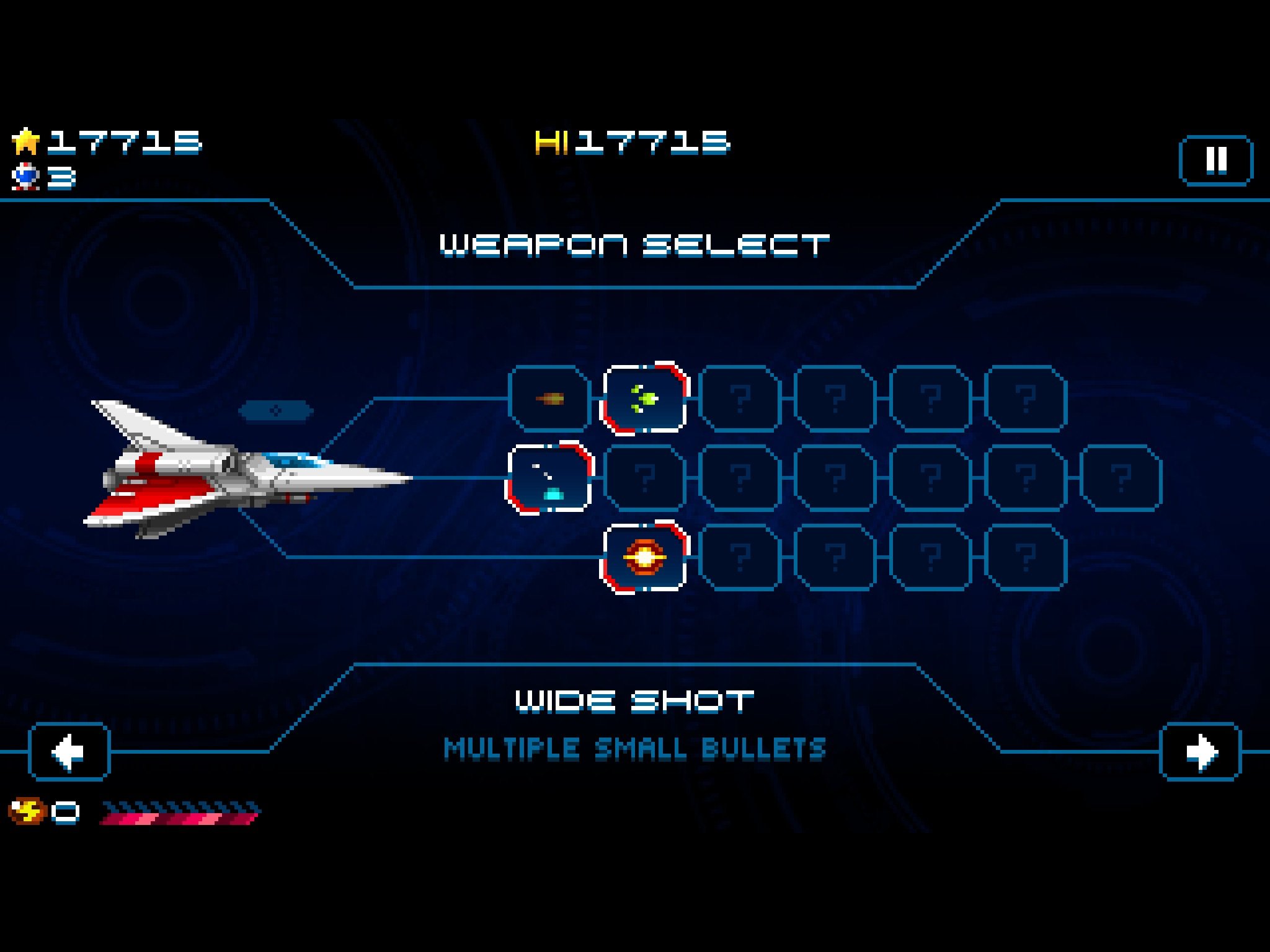 Super Hydorah offers two different display modes: standard and CRT. The CRT mode is based on how games of this type looked on our CRT television screens when we played them back in the day and it is a fun way to experience the game with nostalgia. In fact, the game is filled with nostalgia as it gives various nods to classics of the past, particularly Konami’s Gradius series. You can upgrade your weapons after defeating bosses and completing stages before you go on to the next stage. Thus, there is some customization involved as you have three categories of weapons to choose from or upgrade. You can also fly over green (primary) and red (secondary) orbs that fallen enemies may leave behind to upgrade your weapons.

There are branching paths within the map screen that you access before choosing a stage to fly into. This gives the game added replayability as it is a bit like Starfox’s branching path structure where multiple paths may lead to the same end. That is if you do not perish along the way. The game is quite challenging, but not overly so, particularly in easy mode. In fact, This brings me to the next point: You have two different modes of play to choose from. There is the Normal Mode, which will give you one shield and hit to absorb. Basically, if you get hit just once, you die and your ship blows up. There is also the Easy Mode where you have three shields, which allows you to absorb three hits and one for your ship before it gets blown up, so you have four hits total before dying. The Easy Mode’s shields also auto-regenerate over time, unlike the Standard Mode’s single shield.

The game controls very well on the touchscreen, which surprised me a bit as many such shooters don’t have that precision element where you can slide diagonally gently. I found the best way to play Super Hydorah was with my thumb on the right side of the display where the enemies are usually coming from and not the traditional method from the left side. Anyone into shoot ’em ups needs to give this game a try. It plays and controls well in a nice and frantic pace that should keep you on your toes for long play sessions. Super Hydorah is a very pleasant tribute to the classics of a bygone era.