Earlier this month we got news that Valve had plans to bring a Steam Link app to the Apple TV and iOS devices. Released back in November of 2015, Steam Link is a hardware device that allows you to stream games from your PC to your TV, played via the Steam Controller. Unsurprisingly, like most things Valve does, the Steam Link works pretty well. The problem is it’s another set top box to buy, which (at least amongst my circle of gamer friends) led to fewer people than I would have expected actually picking one up because in this day and age between Apple TVs, Amazon Fire devices, Google Chromecast, and an array of consoles, needing one more HDMI port to plug something in is a tall ask. Meanwhile, tons of people have iPads, iPhones, and/or Apple TVs, so some sort of app-based implementation of Steam Link seems far more ideal- Particularly when compared to buying yet another piece of hardware to live in your home theater setup. 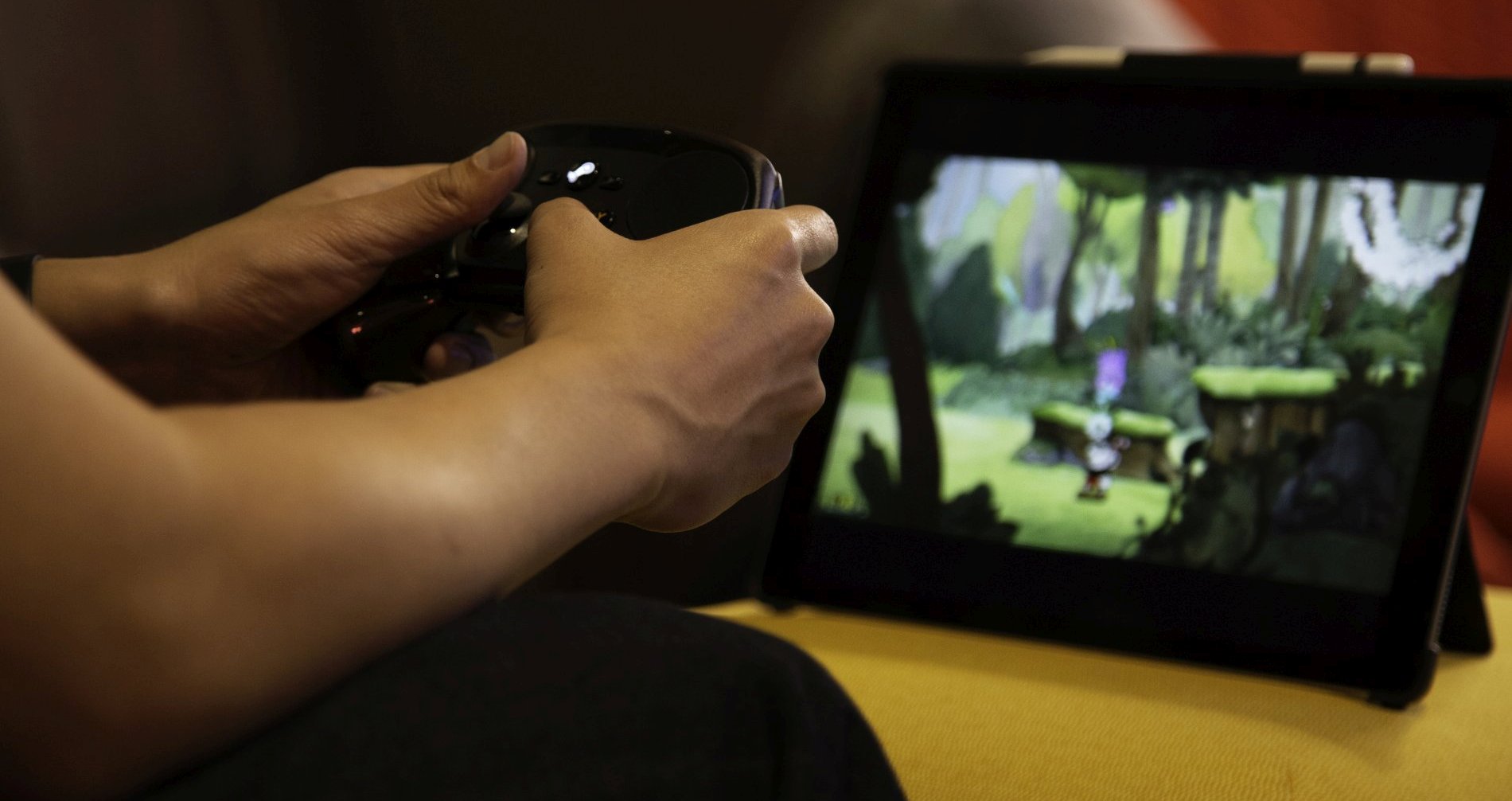 Now, we’ve been around long enough here at TouchArcade that we’ve seen our fair share of game streaming services come and go. The highest profile service would probably be OnLive, which we extensively previewed just as our beta build was about to expire. OnLive streamed high-end PC games, very similar to Steam Link, but never got off the ground due to Apple’s policies which prevented them from running their own storefront inside of the OnLive app, and allowing people to run games that weren’t filtered through the App Store approval process.

As time went on, Nvidia eventually released the Shield which we took an in-depth look at prior to the launch of the current Apple TV. Curiously enough, one of the big features of the Nvidia shield was that it’s able to stream gameplay from your PC, much like what Steam Link does. For whatever reason, I really never was able to get this working well enough to invoke anything beyond a, “Huh, that’s neat." There was just enough lag to be annoying, even when I hardwired everything. 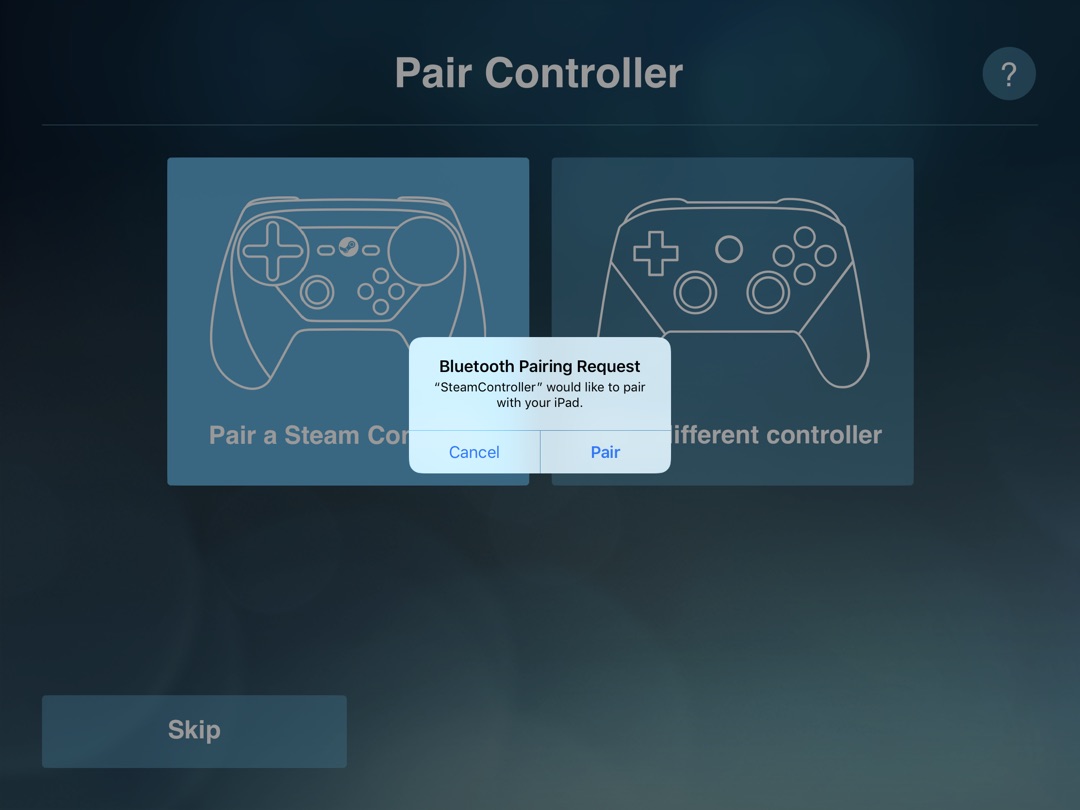 Between these two previous examples of services and hardware that have attempted what Valve is doing, I’ll fully admit: I was not optimistic for the iOS Steam Link app. I figured it’d be cool enough to be worth checking out, but probably slow enough that you could really only play turn-based games and it seemed like there was a 0% chance you’d actually be able to interact with any Steam library management, purchasing, or anything to do with the player-driven Steam marketplace.

Oh, how I was wrong.

Quite simply, Steam Link for iOS devices and the Apple TV works so well it straight up feels like there’s some kind of actual wizardry powering it all. Even more wild is that Valve snuck out an update to their Steam controller making it fully compatible with iOS devices and the Apple TV. (MFi controllers work as well, but according to Valve they’ve done some additional tweaking to the way the Steam controller works to lower latency even further than the MFi standard allows.) Using the Steam Link app is as simple as loading it up, pairing a controller, letting it search your network for your PC running Steam, confirming the pairing on the PC itself, and playing games. 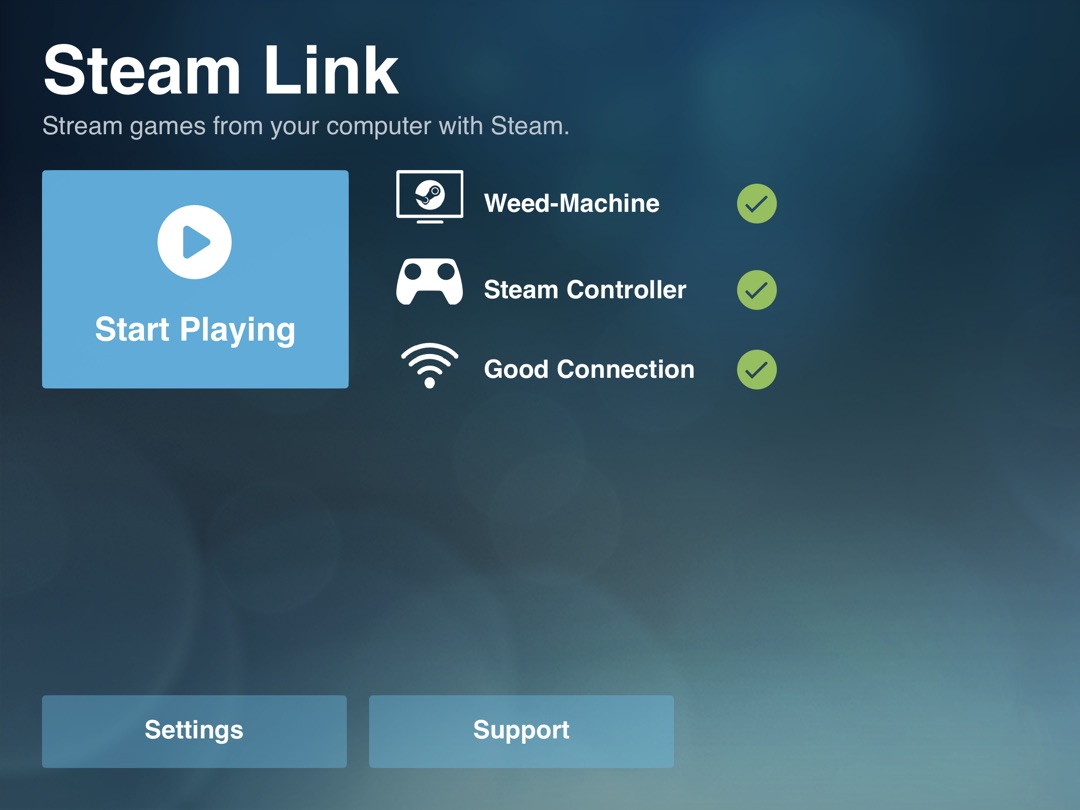 Once you’ve done that, it’s just like using a Steam Link device or Steam’s Big Picture mode on your local PC. There are no corners cut anywhere, it’s the complete experience. You can buy new games, see your Steam friends, play PC exclusives, sell things on the marketplace, you name it. Better yet, if there’s any lag between the rendering of the game on your PC and then having it appear on your iOS device or Apple TV, my brain isn’t capable of detecting it.

In fact, the first thing I did when I got everything paired was try out games like Super Meat Boy and Rocket League, figuring those would be among the most latency-sensitive games I have. They run flawlessly, so flawlessly in fact, it almost feels weird trying to wrap your head around the streaming stack Valve built to make this all work so well. It reminds me of the Arthur C. Clarke quote, “Any sufficiently advanced technology is indistinguishable from magic." 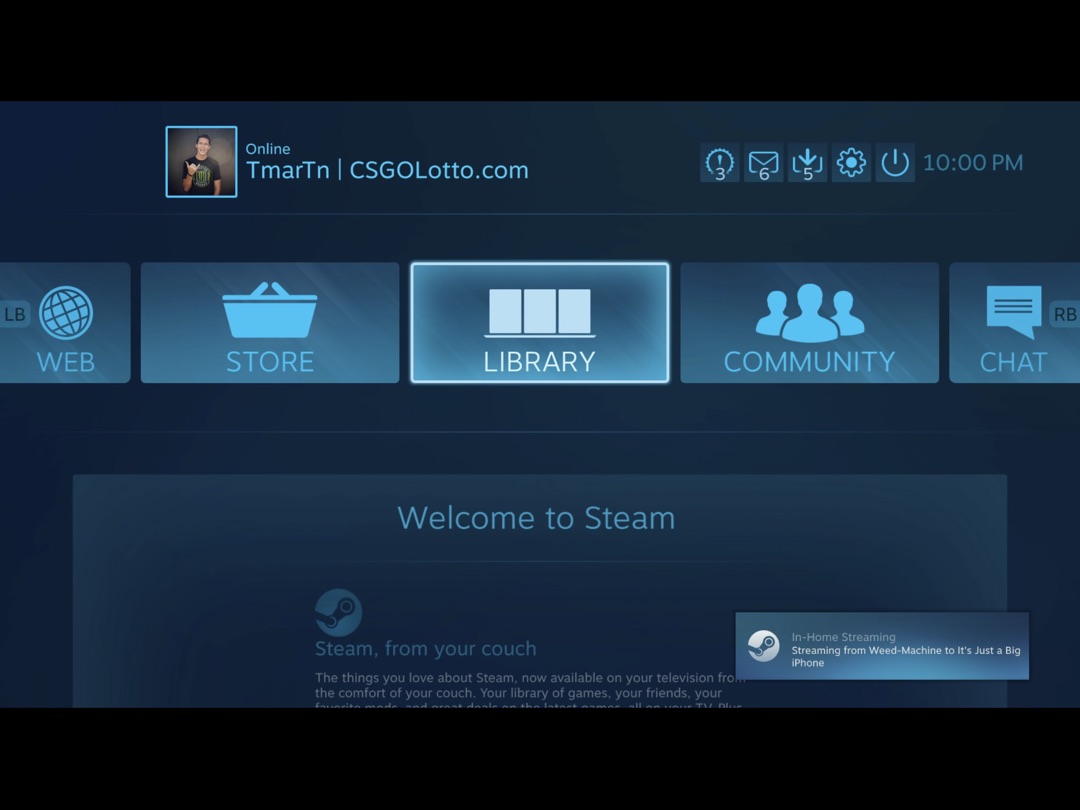 Playing high-end PC games while sitting on my couch with my iPad in my lap is amazing, and even after my brief time of fiddling with this, I can already tell it’s going to be a staple in my household. I love PC gaming, but what I don’t love so much is hiding in my basement glued to my PC, away from the rest of my family. I like being in the midst of things and playing games on my own screen, which is why I’ve gravitated so heavily to iOS and Switch gaming. Combining the iPad play style with the Steam library is such a slam dunk it’s unbelievable.

That being said, if you’ve never used a Steam controller before, it does have a bit of a learning curve. Valve was put in the situation of trying to figure out how to build a controller for games that are traditionally played with a keyboard and mouse, and I’d say they did about as good of a job as they possibly could. The Steam controller has two massive circular touchpads with a bunch of haptics to provide some level of faux tactile feedback, along with a traditional analog stick, four face buttons, and a bunch of triggers. 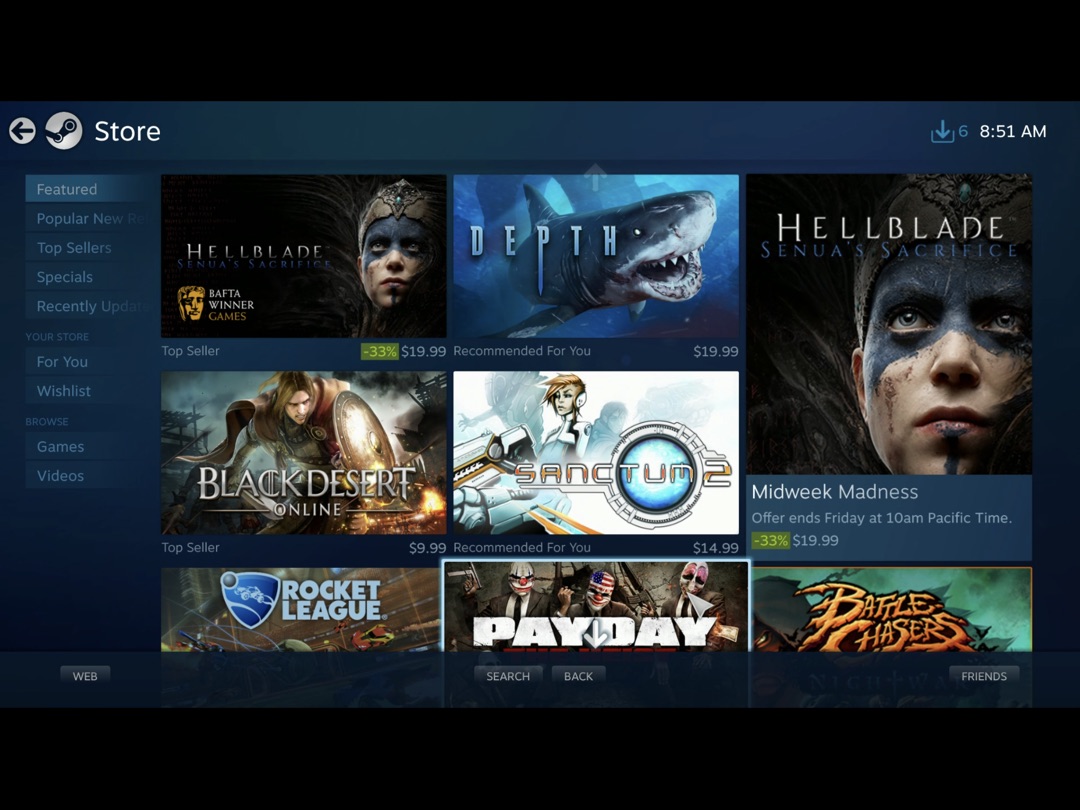 For games that are made with controller support in mind, this all works great. For games that aren’t, there’s a variety of weird mapping options you can do to make them work, none of which ever feel super ideal. For example, if you play Civilization VI using the Steam controller, the right touchpad basically just allows you to move the mouse cursor around like you were playing the game on a laptop. It works, it’s just not often ideal, which is a necessary tradeoff when playing games that were very much designed for a keyboard and mouse while using a controller.

One unexpected surprise is that the iPad and iPhone versions of the Steam Link app have some very basic mouse support built in, moving the cursor around with your taps on screen. Again, like using the Steam controller in games made for a keyboard and mouse, this technically works but isn’t super ideal. Really though, refining these experiences lies in the hands of the developers of these games without good controller support, so if nothing else, kudos to Valve for at least trying to offer ways to play these games- Even if they’re not super ideal. 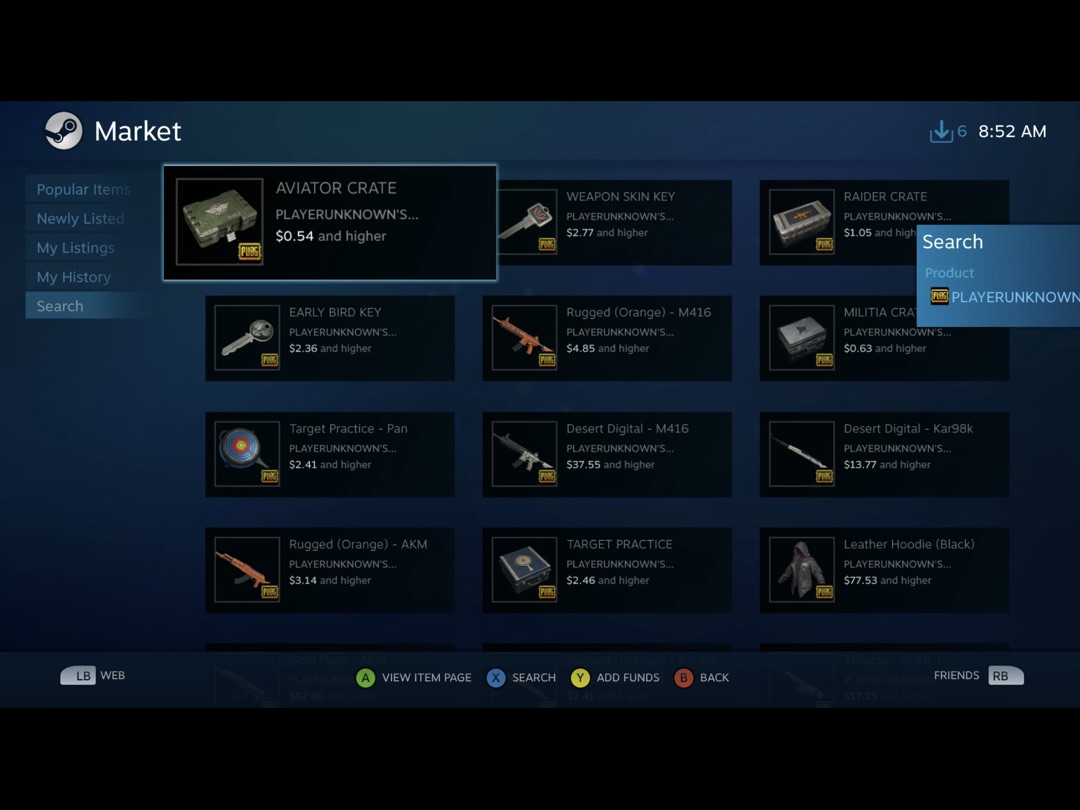 Using a MFi controller instead of a Steam controller works largely the exact same way, with some minor differences. The Steam controller has a select and start button, as well as the ability to click in the thumbsticks. MFi controllers don’t have any of this, so you do combination button presses with the Menu button. Menu and A translates to hitting Start, for instance, while Menu and X does a left thumbstick click. How much of an issue these button combos turn out to be will largely depend on what kind of games you play. If they involve lots of thumbstick clicking, and there isn’t a good button you can remap that to in the game’s options, you’re probably going to be in for a bad time.

As far as settings are concerned inside of the Steam Link app itself, there’s loads of options to change the game streaming quality around. I just left everything default, but you can limit the bandwidth used, limit resolution, and a bunch of other tweaks you’ll probably never need to mess with. There’s also just three presets you can choose from on the stream quality: Fast, Balanced, or Beautiful. I could really tell the difference between any of these, but YMMV. 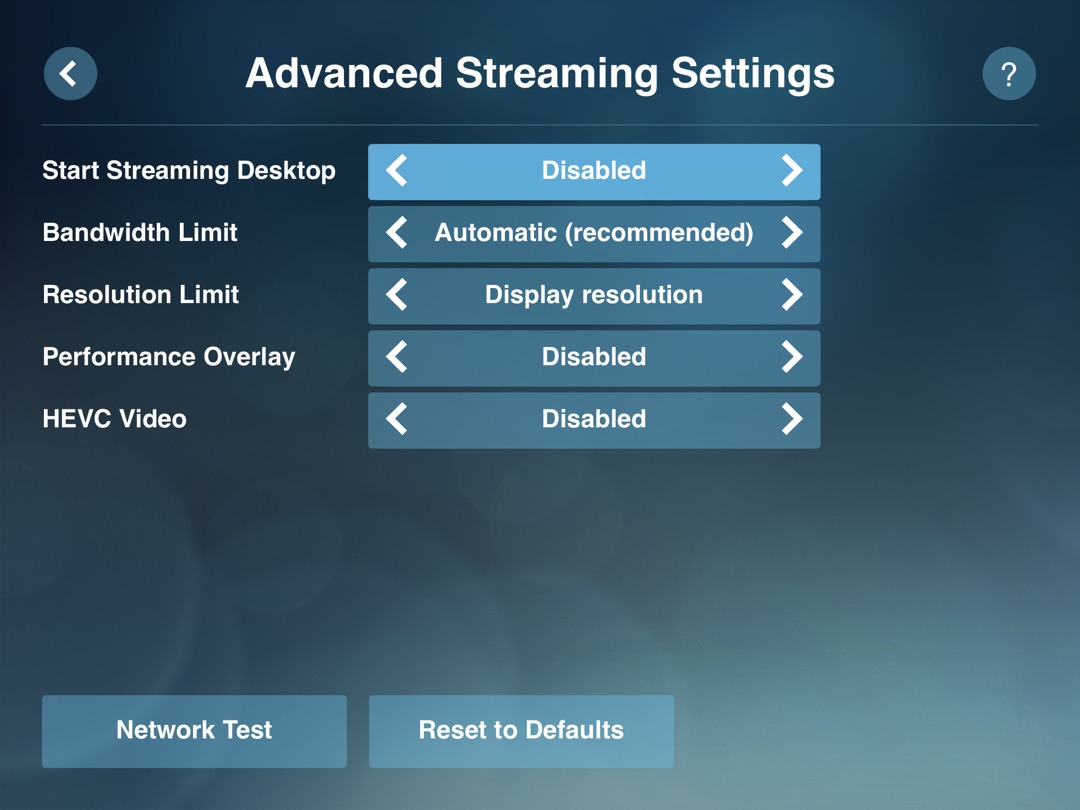 One semi-obvious thing which might be disappointing to some is that to use the Steam Link app you need to be on the same local network as your PC. I spent a considerable amount of time screwing around with different VPN setups to try to get Steam Link to work over LTE and I couldn’t get anything to connect. I reached out to Valve to ask about this and while they say they don’t specifically block this functionality, they haven’t gotten it to work either. They suspect LTE is either too lossy for the data transmission method they’re using or the packets are just being blocked by cellular service providers.

So, if you were hoping to live the dream of playing Steam games on the go, as far as I can tell, it’s a non-starter with this setup. Based on experience with streaming OnLive over LTE (or it actually might have been 3G/4G back then?), this isn’t something you’re going to want to be doing anyway. Game streaming like this is super dependent on your PC just being able to spray packets at your iOS device or Apple TV as quickly as possible, and cellular networks just don’t do low latency… Yet, anyway. 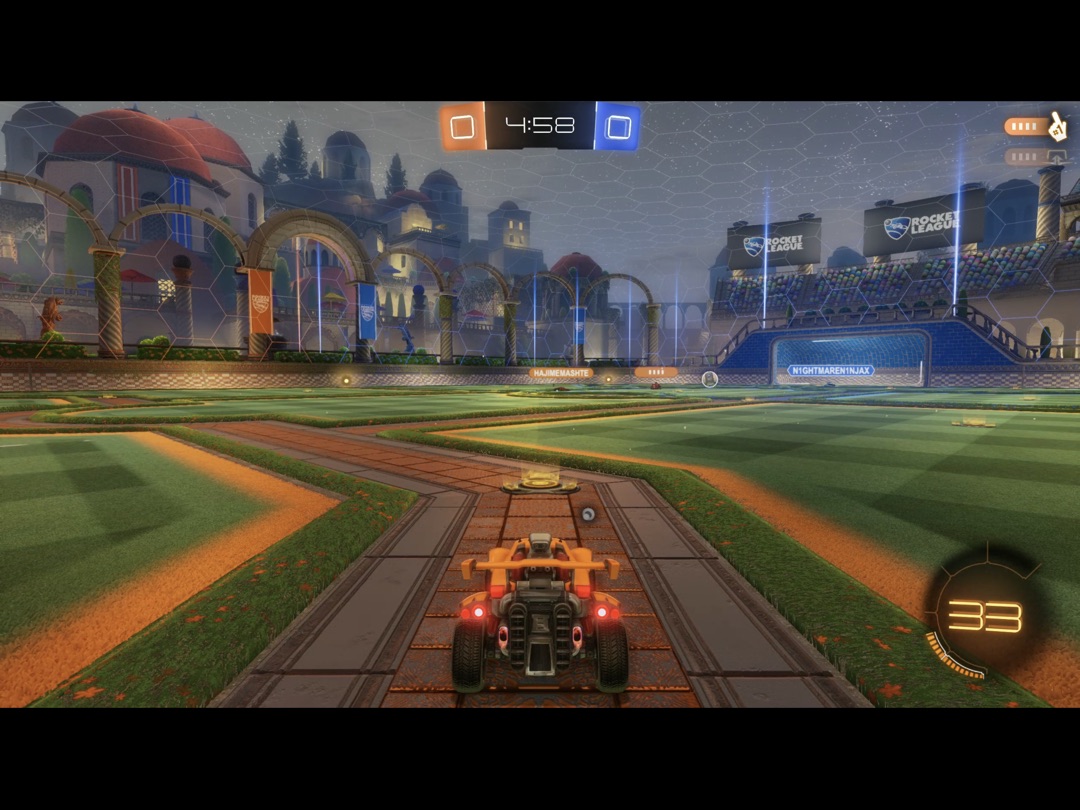 Overall, I have constantly found myself completely blown away by how well the Steam Link app works. If you have a gaming PC in your house, and an iPad or Apple TV, I do not think it is at all hyperbole to say that this is the killer app for iOS devices. If you’re the kind of person who is always hungry for “real" PC-like game experiences on your Apple device, but have been dismayed by the amount of junk on the App Store, you can basically delete everything else but the Steam Link app. I’m still dumbfounded by Apple apparently allowing this on their platform, as I could see a very real situation where many people just straight up stop buying things from the App Store and exclusively purchase Steam games through Valve instead.

Even more weird is that games like the fantastic port of Civilization VI have proven iOS devices are more than capable of running very recent full-blown PC titles. Unfortunately, Apple’s refusal to maintain any sense of sanity when it comes to the economic ecosystem of the App Store has made releasing games like this a fool’s errand. It seems like this has created a massive opportunity for Valve, one which they’re flawlessly capitalizing on with the Steam Link app. 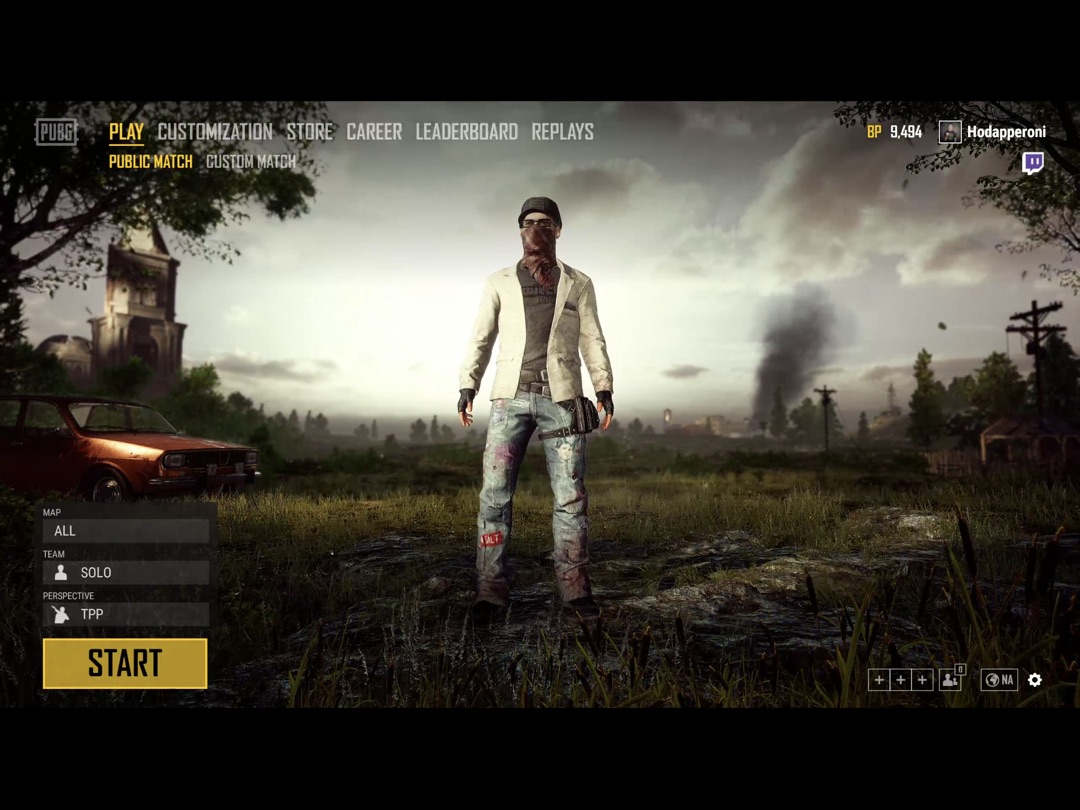 Valve’s Steam Link app will launch on Android today (if it hasn’t already by the time you’re reading this) with an iOS release pending further review from Apple. For more details and download links when they are available, head on over to the Steam Link app web site.