It’s been a bit of a rough first year for SEGA Forever, the latest initiative from SEGA to bring their classic games to mobile gamers. The basic idea was a good one: plumb the depths of SEGA’s invaluable gaming archives and make the treasures within available for anyone with a smartphone to play for free. Players could pay a relatively small one-time price to remove ads and take advantage of extra features. The bulk of the releases have been drawn from the Genesis console, SEGA’s most popular hardware worldwide. Unfortunately, when the service launched, the emulator that SEGA was using for these releases was in pretty poor shape, and it feels like the whole line has been trying to recover ever since.

SEGA eventually got the Genesis emulator whipped into shape and even started adding some cool features like the ability to rewind gameplay or play multiplayer via local wi-fi. That’s great for new releases in the line, but what of the previously-released titles? While it’s unclear at this point if SEGA is going to update every released title so far, we can at least check a couple of the more popular releases off the list. To go with the release of Dynamite Headdy, SEGA has pushed updates for both Golden Axe (Free) and Altered Beast (Free). 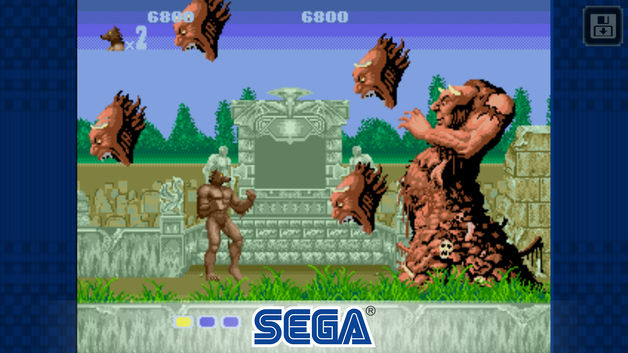 Launch title Altered Beast has seen the most significant changes, as it was using a fairly old version of the emulator. Improved emulation, local wi-fi multiplayer support, the rewind feature, and a bunch of new display options make for a much better experience than before. In fact, at least one of the display options is so new that even Headdy doesn’t have it. You’re now able to play in pixel-perfect mode, which windows the gameplay to provide a more accurate picture. I’d love to see this come to Phantasy Star 2, as it has the added benefit of ensuring the virtual buttons aren’t blocking things on the screen.

Golden Axe came a few months and several versions of the emulator later than Altered Beast, and even had an update to add in the rewind feature a couple of months after its release. This new version adds in the extra display features, but most importantly, the game now supports local wi-fi multiplayer. This game is a stone-cold two-player Genesis classic, and one of my criticisms in my initial review of the game was that there was no way to play the mobile version with a friend. Problem solved!

With a new title released and these new updates, SEGA Forever appears to be coming out of the near-hibernation it has been in since the start of 2018. Recent announcements from SEGA suggest that they’re going to be attacking things from a different angle from here on out. We can only hope things go a little better with this new approach. In any case, it’s at least nice to see the initial spate of titles isn’t being left behind as the company switches focus for upcoming releases.