SEGA is a company that has made its mark in multiple arenas, but perhaps none so much as the arcades. They took a little longer to get going than some of their fellow members of the arcade royalty, but by the mid-1980s they were starting to hit a stride that wouldn’t slow until arcades themselves did. They achieved that through a variety of means. Sometimes it was pure technological spectacle. At other times, it was through clever gameplay innovations. But SEGA also knew how to recognize a good thing and make their own spin on it, a skill shared by all of the very best arcade game makers. The 1989 release of Golden Axe (Free) was a fine example of that, combining a few popular trends into one slick, enjoyable gaming experience.

Golden Axe is back on the App Store courtesy of the SEGA Forever initiative. This is the Genesis/Mega Drive version that was already released in 2009 but pulled after it had a whammy put on it by too many iOS updates. Naturally, it’s using the new SEGA Forever emulator and feature set, so it’s not perfect, but it’s definitely close enough for most people at this point. You can play for free if you don’t mind ads interrupting you and having to be online to play, or you can splurge for the IAP to remove the ads and the ability to play offline. Whether you pay or not, you can take advantage of MFi controller support if that is your particular jam. Double-tapping can be a little tricky on the virtual pad, but otherwise Golden Axe doesn’t suffer too much if you’re playing it with touch controls. The loss of the two-player mode is a far bigger blow. 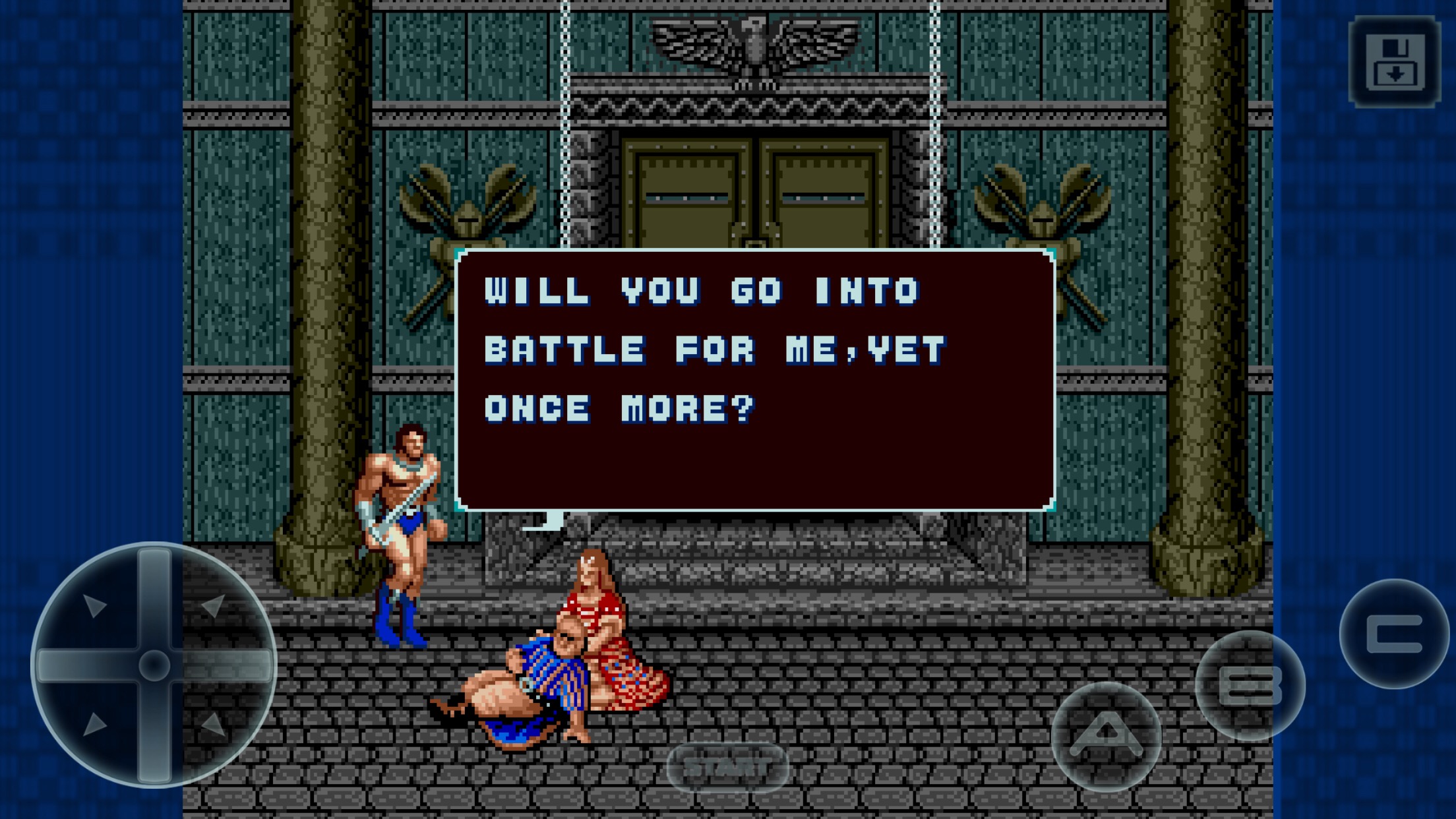 Anyway, if you’re just here to ride the Nostalgia Choo-Choo, all aboard. I mean, provided your warm fuzzy memories of this one don’t involve your friend or sibling by your side playing with you. This is the console version of Golden Axe, in all of its Conan-meets-Double Dragon glory. Aside from the fact that you can’t choose the two-player mode, everything is here intact, right down to the stage select code. All of the latest options that we saw in Ristar are here too, so you can choose to use a graphical filter, move around the controls, and so on. Save states are also in and highly welcome given the game’s nasty level of difficulty. It’s a pretty great experience all-around for those seeking to revisit the good old days without leaving the comfort of their bed, office chair, or toilet.

As to the question of whether or not Golden Axe is worth more than a nostalgia trip, that’s tougher. Belt-scrolling beat-em-ups had a real boom from Double Dragon‘s 1987 debut until the 1992 arrival of Street Fighter 2, a game that supercharged a new genre, dethroned the previous king, and changed the whole arcade landscape. In that brief half-decade, just about every company tried their hand at a beat-em-up to varying degrees of success, and the genre evolved at a rapid rate as a result. Golden Axe falls right in the middle of that period, and it feels like it. When compared to its contemporaries, it comes out looking quite good. Multiple playable characters with different fighting styles and parameters, super moves, a relatively large count of stages, an interesting theme, and rideable mounts all put this at or beyond the best of what was available in 1989. It’s fast, the visuals are appealing, and the soundtrack perfectly captures the feeling of Arnie in a loincloth punching a camel. 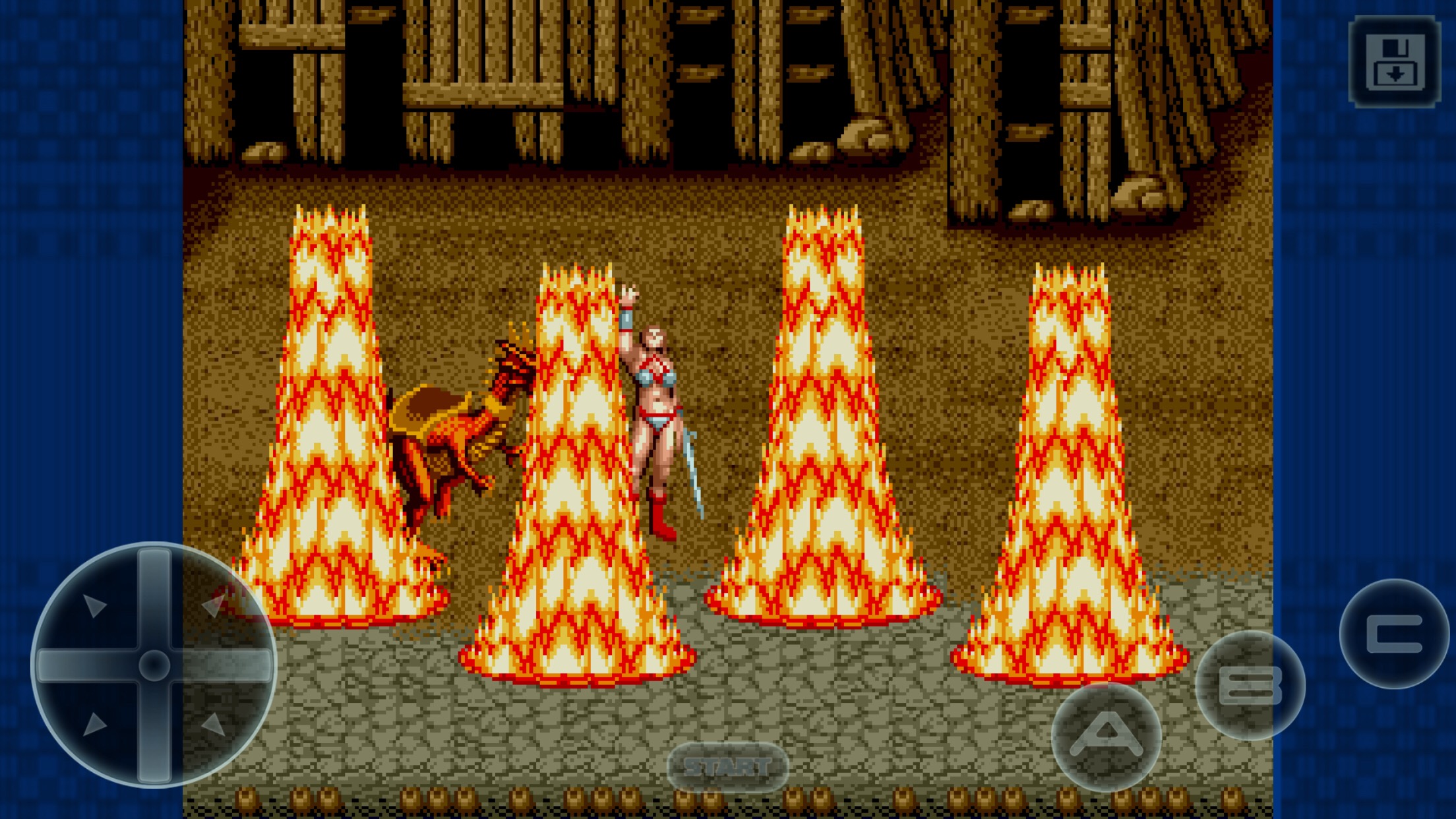 The Genesis version of the game improves on the arcade version in a number of ways. It has a new Duel mode that challenges you to survive in consecutive battles against a variety of enemies. You can’t play the two-player version of this mode on the mobile version, but it’s still a little fun to see how far you can go. There’s also a Beginner mode that makes the game easier at the expense of ending halfway through. The meat is in the Arcade mode, however, which recreates the original arcade game with an added stage and ultimate final boss. In exchange, you lose some of the graphical quality of the arcade version, along with its amazingly bizarre ending. There’s also some light censorship in the home version, but nothing to get too up in arms about. Oh, and you can’t credit-feed your way to the ending in the home version. Four continues are all you get. If I were SEGA, I probably would have chosen the Genesis version for this release as well.

Unfortunately, while Golden Axe is an exceptional beat-em-up by 1989 standards, the genre had a whole lot more track in front of it. SEGA themselves would surpass Golden Axe several times over, both in its arcade-exclusive sequel Revenge of Death Adder and in other series such as Streets of Rage. With its origins firmly planted in the arcades, the game is constantly hopping over the line between tough and cheap. The added boss in the Genesis version vaults over that line with a grin and a thumbs-up, mocking you the whole way. It’s even worse here since you can’t count on a friend helping you out. The list of moves for each character is fairly small, and there are some instances of platforming that have no place in a beat-em-up with such floaty jumping controls. Boss and enemy variety is a little on the thin side, and there are frankly few foes for which a dashing attack isn’t the best medicine. 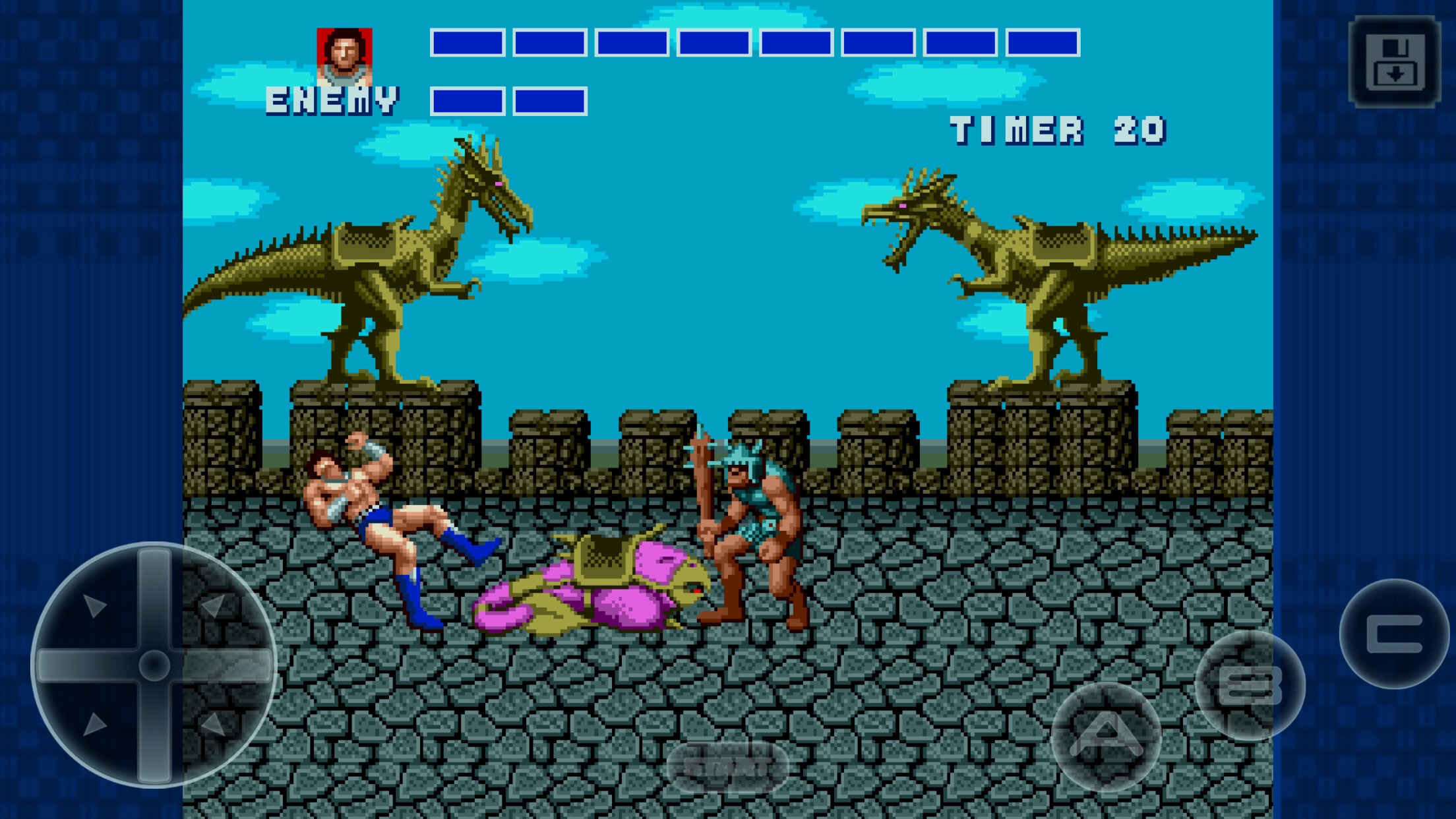 Having said all that, I must concede that Golden Axe is still quite playable today, even if it is enormously frustrating at times. Time has done it few favors, but the core is solid enough that I think even a new player could enjoy it unless they have a particular aversion to this sort of thing. I think it would be a lot easier to have fun with the game if SEGA had worked out some sort of solution to allow the two-player mode to function, but even a solo player can get some kicks out of bashing in a skeleton’s head with the pommel of their broadsword before chucking it at its fellow henchmen. No matter how much time passes, I can’t bring myself to dislike a game that dedicates itself so diligently to making an interactive Frank Frazetta painting.

You can try Golden Axe for free to see if it’s up your alley, but I suspect the majority of the people reading this already know. In which case, the most helpful information that I can offer to you is that it is indeed the Genesis version, SEGA did a decent job of emulating it, there’s no way to play two-players, and it doesn’t lose much from the switch to touch controls. If you already bought this game in its previous iOS incarnation, you can restore your purchase to get the ad-free version at no additional cost. The axe is waiting, a little chipped but still sharp enough to separate a head from its shoulders. Whether or not you pick it up is up to you.