Immortal Warriors (Free) is the latest RPG/city building hybrid keen to hold your attention through a never ending supply of quests and tasks. It might be keen for you to buy your way to victory, but there are plenty of ways to enjoy Immortal Warriors without the need for spending any dollars. We take a look at how to play the game most effectively. 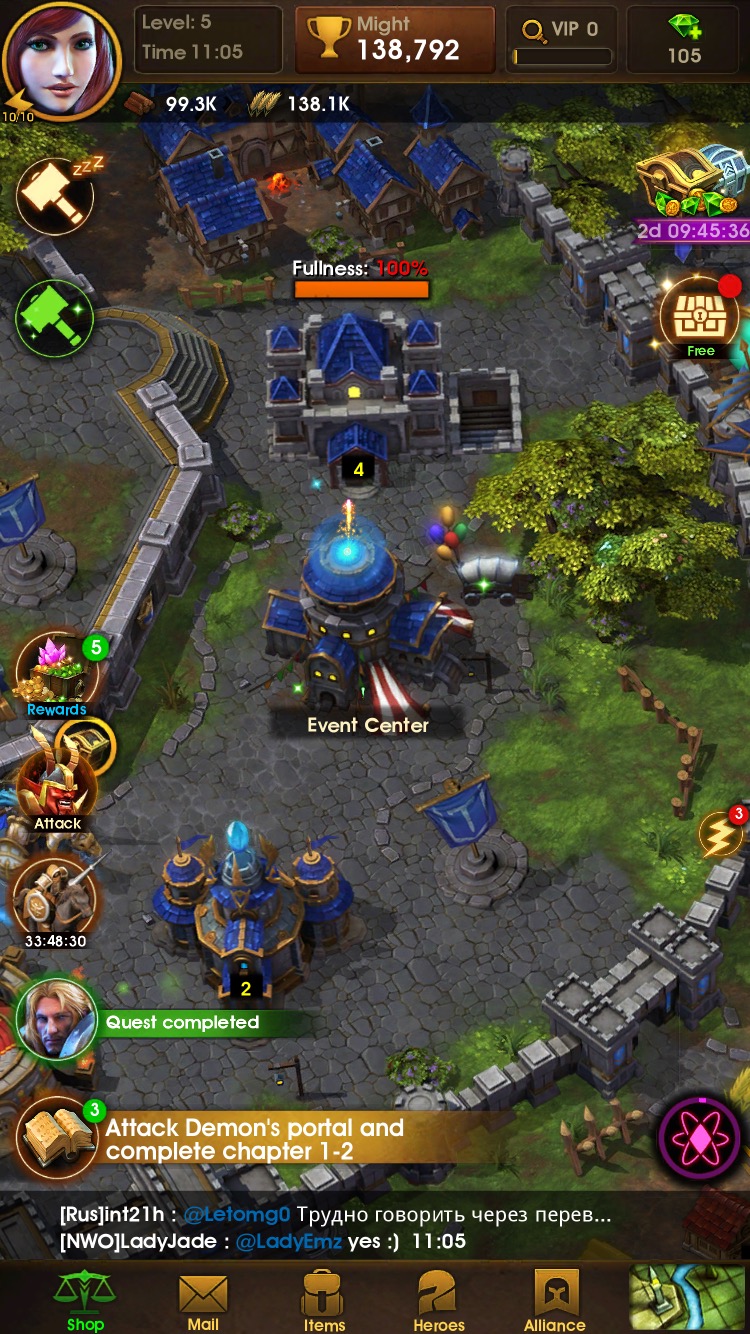 Like Game of War – Fire Age and so many more, Immortal Warriors is squarely focused on keeping you busy with tasks. Starting out, you won’t really have to think that deeply about what you’re doing. See the task reminder near the bottom of the screen? Tap it and follow whatever it says. It’s mostly aimed at helping you establish a solid base before your ‘newbie’ shield drops which makes you vulnerable to enemy attack.

While you’re completing said tasks, keep an eye on what’s going on. The concepts here are fairly self explanatory but there’s still a lot to take in.

Places like sawmills and farms all contribute to the resources you gather at regular intervals. You need those to actually be able to build new units or upgrade existing structures.

The Embassy provides reinforcements during attack, while the Resource Center protects a certain amount of your resources whenever you’re under attack.

The Military Center is there for you to train new units to send out to attack enemy bases. Early on though, this isn’t a priority as you need to be pretty strong to stand a chance.

Essentially, everything has a key role so you don’t want to upgrade things in an unbalanced way. The constant supply of tasks tends to keep you on the straight and narrow here. Don’t be tempted to over-upgrade your Military Center, even though it might seem like it’d make sense. You’re better off working on the less interesting seeming stuff like the Resource Center. Balance is key. 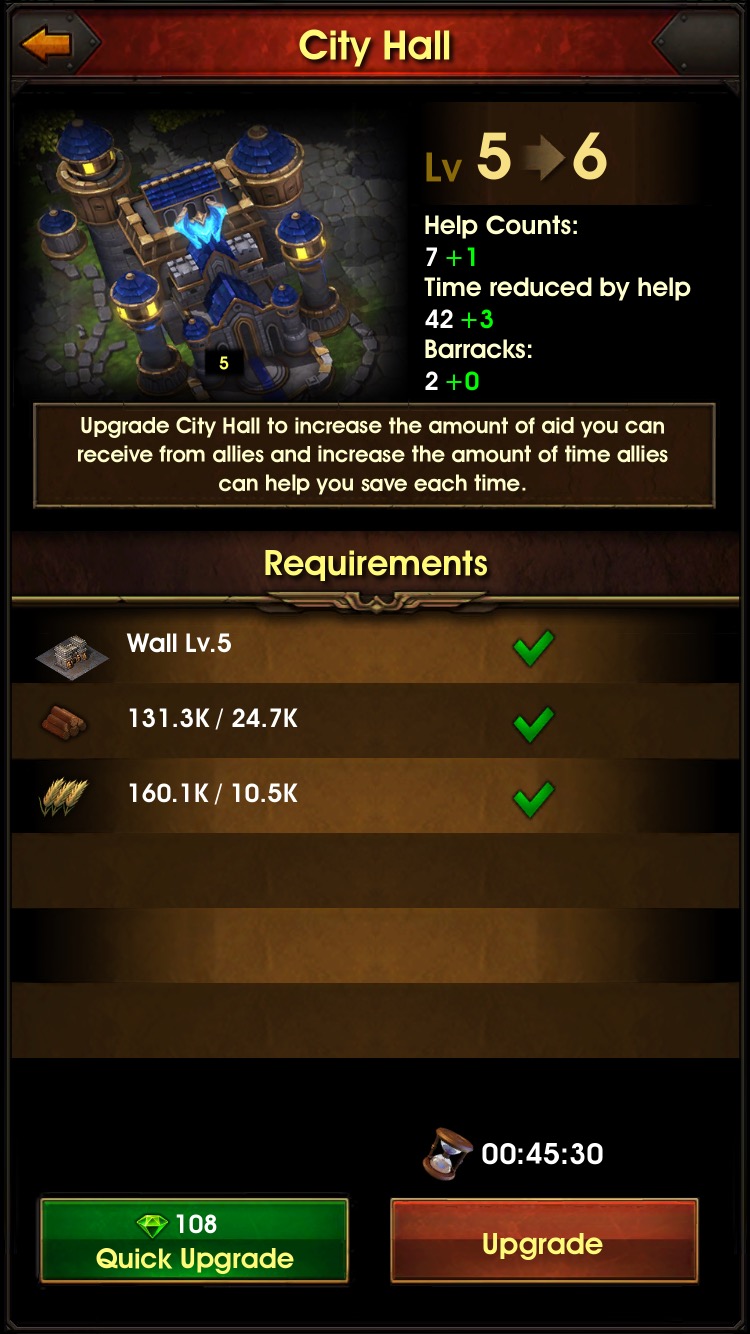 You’ll soon notice that everything takes time to upgrade. This time seems fairly speedy at first then soon slows down massively. Prepare for this. See, you’re given various speed up bonuses as you progress. You can use them whenever you want but they’re less frequently available the more you play.

Hold onto them unless you really need them. Think about how you’re playing. Are you really going to be playing a long session? Odds are you’re going to dive in for 5 minutes, get stuff done, then come back later. Don’t waste your speed ups if you’re just going to quit out soon afterwards. Be patient.

Any timer that takes less than 5 minutes can be sped up for free. That also applies to anything that you’ve previously reduced to fewer than 5 minutes or has naturally gone under that limit. Use this knowledge to your advantage. Use some speed-up bonuses to get the timer to just under 5 minutes but never any more so. It’s a waste otherwise.

Tweaking things to your style 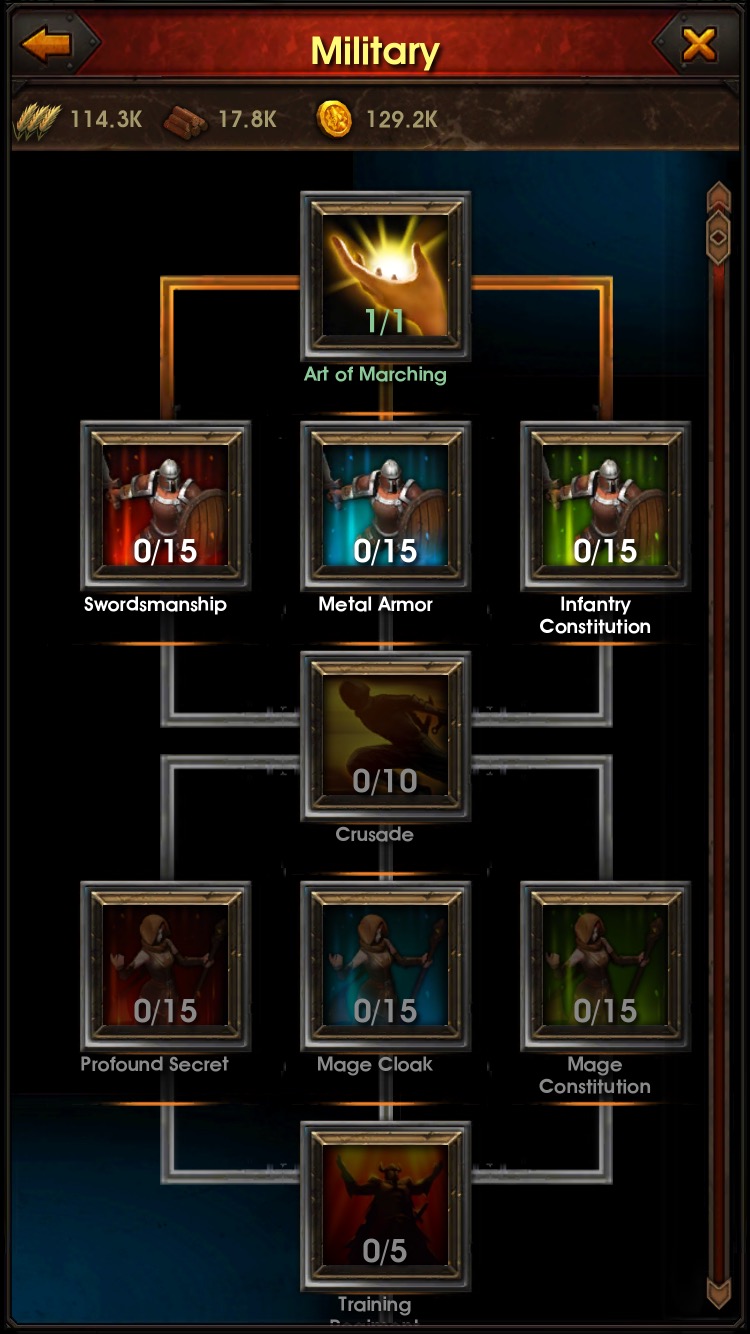 The Academy is the key place for adapting your base to how you want it to be. Once it unlocks, it enables you to pursue different research fields. These are typically divided up between offensive advantages (such as a boost to your unit strength), science based (developmental upgrades), and logistical improvements which are a mixture of everything.

Immortal Warriors is fairly linear at times so the Academy is a good place to try to deviate from the set path. You can gradually develop things into how you want them to be this way. 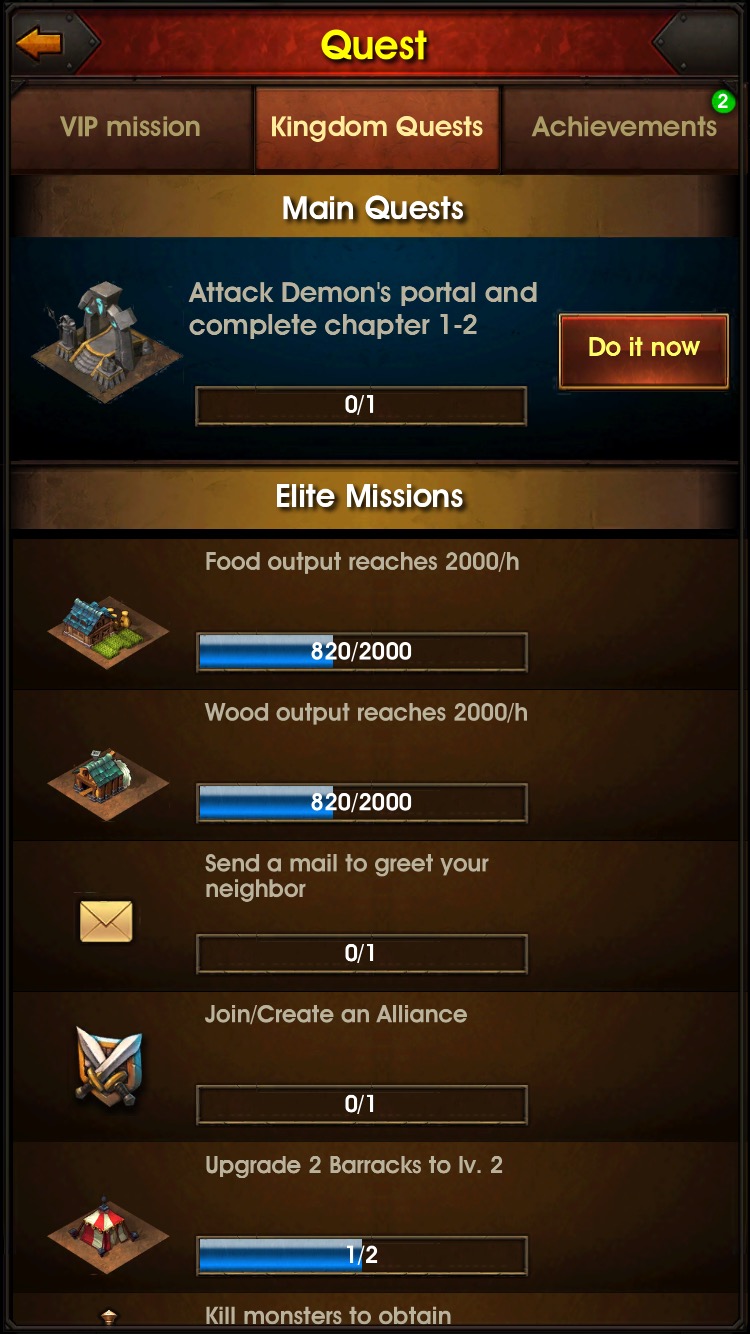 Check in to the Quest section of Immortal Warriors often. You don’t automatically receive all rewards. The main quest line is a simple matter of hitting the text on the main screen, but other stuff stays hidden away. Check in often to see what you can claim. The same goes for achievements with a green numbered circle highlighting how many are ready to claim. Simply completing standard objectives like boosting your food output can unlock some useful freebies.

Those freebies are typically things like a bunch of one type of resource. Don’t automatically unlock them. Keep them to the side. Only so much of your resources are protected via the Resource Center so it’s good to keep things fairly slim in case of attack. At any time when upgrading a building, if you haven’t got sufficient resources available to you to do so, you’re only a tap or two away from unlocking the aforementioned free stuff so it’s no big deal.

Free gifts are available every few minutes from the main screen. Hit the button whenever it pops up. You’re assigned a random bonus such as a speed-up power-up or additional resources. These add up fairly fast and it’s not like you have to do much to get them.

Join an alliance as soon as you can. They’re a great way of becoming stronger. They’ll also help you unlock some extra quests and achievements. There’s no downside to speak of. 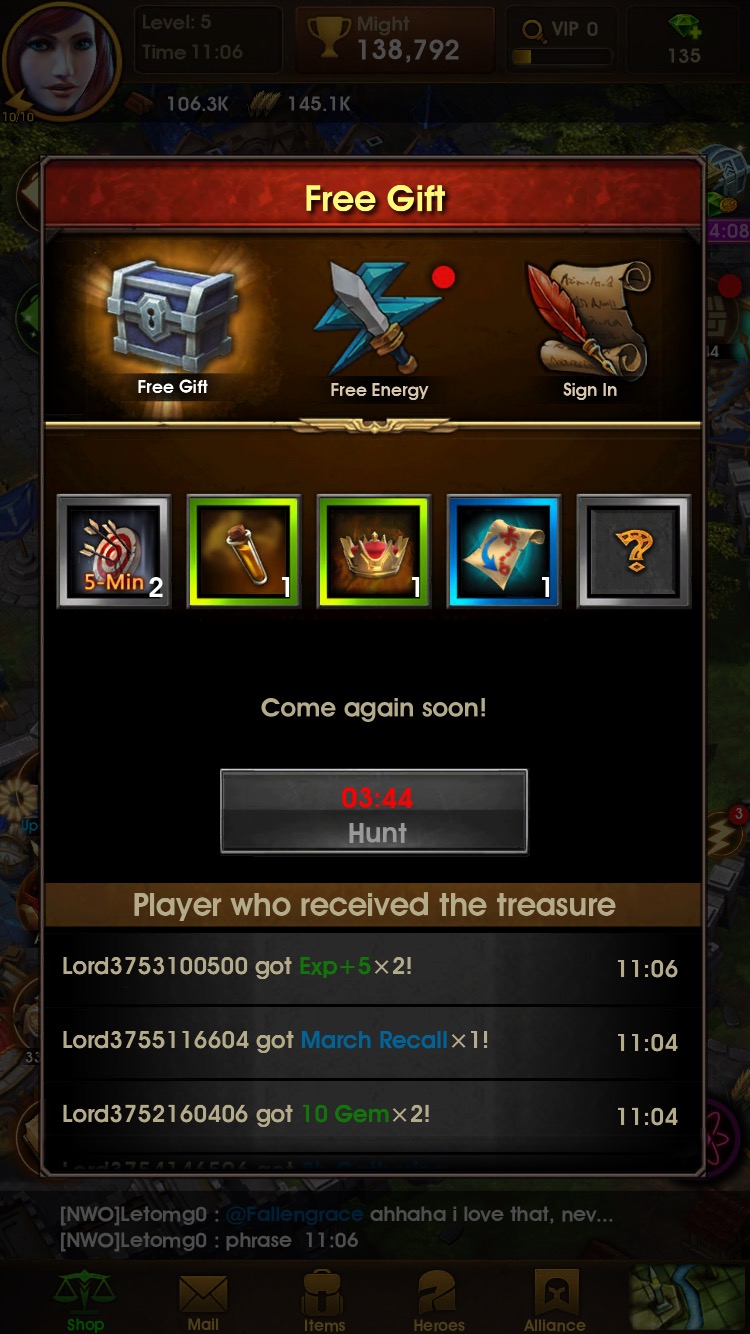 Immortal Warriors has many different forms of currencies and resources. The standard ones are wood, food, and gold. The premium currency is in the form of green gems. These do a ton of different things like speeding up upgrades, buying resources or unlocking chest packages that contain a plethora of bonuses.

You can also invest your gems in a scheme that gives you the chance to earn more. You’re going to have to accrue a ton of these to get anywhere. So, guess what you need to do? Yup, never use your gems. Stockpile them like crazy and appreciate that they’re hard to come by, especially early on.

Another set of resources comes via the Arena. Unlocked at level 7, the Arena allows you to fight it out in PvP battles with other players. It’s especially tough early on, but a might stat shows your chances so you know what to pursue.

Win in an Arena battle and you earn Arena coins. These can be redeemed for many other resources like gold, stone to make new weapons, or speed-up bonuses.

Winning also boosts your rank which can lead to gem rewards. It’s worth pursuing once your force is strong enough to stand a chance. 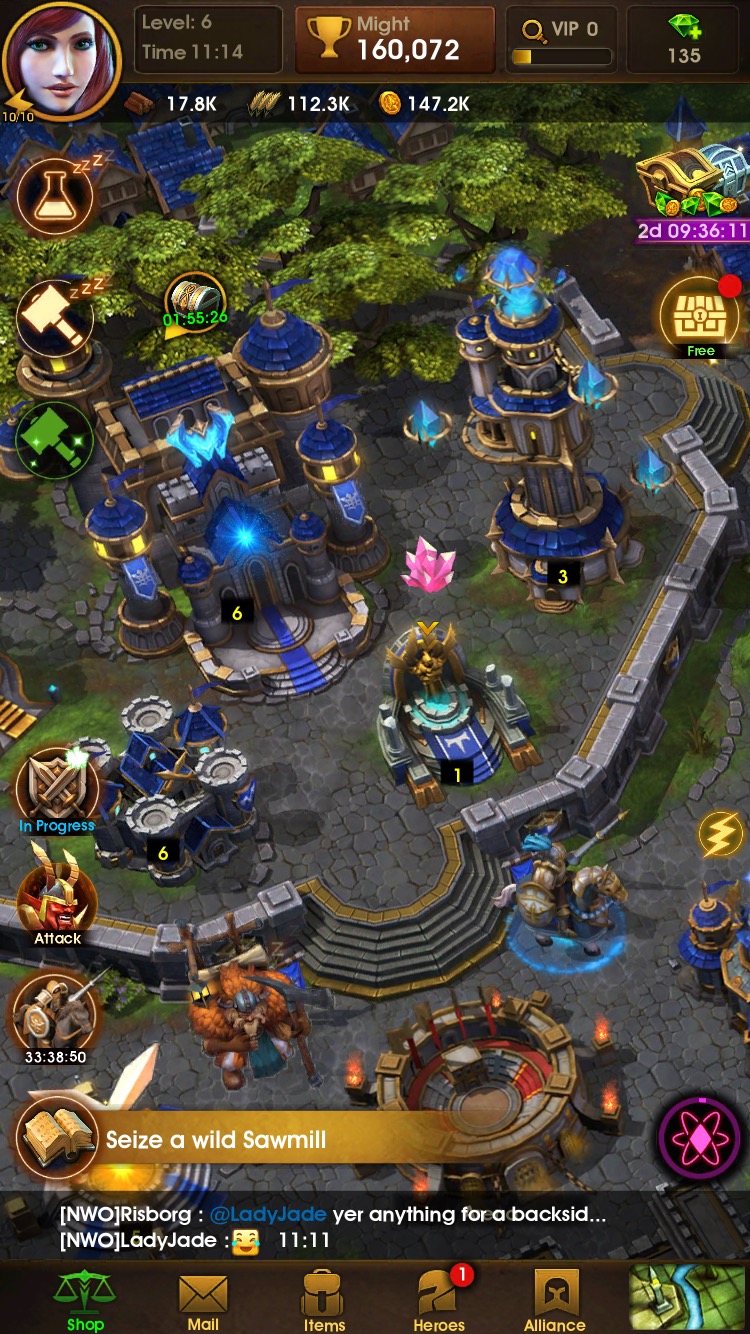 Unusually, Immortal Warriors has a loose storyline to pursue. Via numerous battles, you can progress in this and unlock new content. Known as the Demon’s portal, battles don’t take long and typically unlock speed-up bonuses that you can then use to progress your base faster.

There are often rewards via the quest system that dishes out more resources, simply for doing your job.

Don’t worry about being under strength. The game will warn you if that’s the case, and makes suggestions of what you can do to improve your chances. Take heed. It’s rarely wrong.

Fighting regularly also helps your heroes develop their skills. These are the commanders of your regular units, and each offers a useful skill or two for boosting your chances. They level up quite fast early on so check in on their skills board regularly and keep them updated.