Considering how The Sims Mobile (Free) has made itself right at home on the free apps chart, it’s quite possible you’re one of the millions of mobile gamers who has already dipped your toes into Maxis and EA’s latest take on simulated life. You’ve tested out a career, attended a party or two and gussied up your clothes and house, probably more than once. Yet you may not have been able to avoid a very simple question: Is there something more?

That’s a pretty existential query for a free-to-play mobile game, and not one we’re going to investigate without tongue at least partially in cheek. It’s pretty simple to get another playable Sim in the game early on so your first Sim has a roommate. But when it comes to the more lasting ties, the ones that hopefully form through romance, marriage and even bearing children, that takes a little more work on your part.

Let’s start with the easiest part, which is how to get your Sim into a relationship in the first place, which thankfully is much easier and way less fraught with text and social media-inspired peril than it is IRL.

A Brief Overview of Relationships and Love in the Sim World 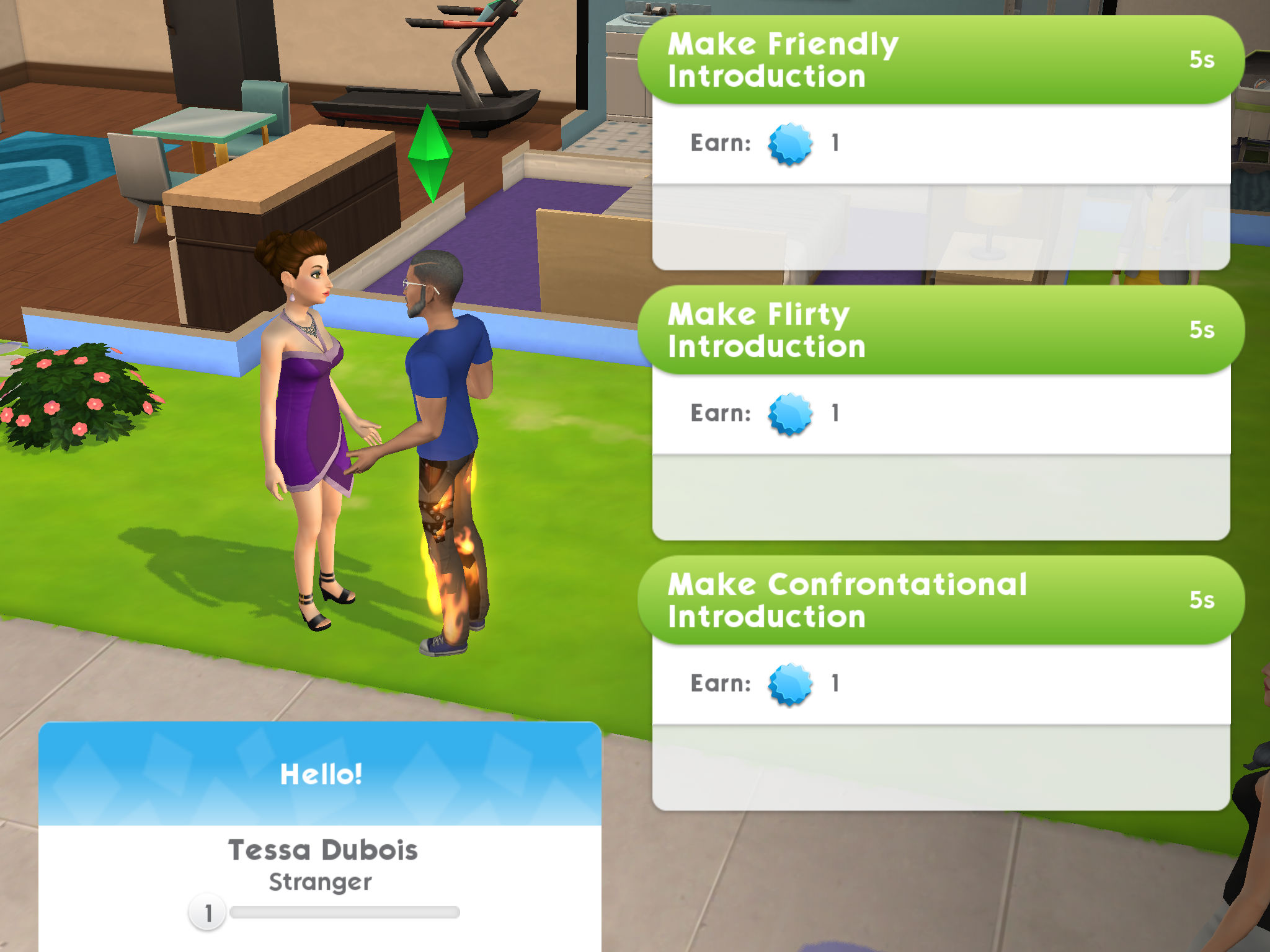 You may or may not be surprised to learn that the road to a relationship with any other Sim in The Sims Mobile starts with an introduction. When you first encounter any other Sim you’ve not already met, you’ll have a choice of three potential introductions: Friendly, Flirty and Confrontational. This initial choice controls which of the relationship storylines are immediately available to you, and unlike real world introductions, they always succeed. Sims are just charmers, we suppose.

While the Friendly and Confrontational greetings are ones you’ll definitely want to test out for the stories they unlock, for our purposes, Flirty is the one you’ll be most interested in. Choosing this option immediately opens up the ‘First Date at the Cafe’ event, which is the start of where all the magic happens. Before anyone asks, yes, the game allows you to make Flirty intros and have romantic relationships with Sims of either gender. Your introduction doesn’t limit you in any permanent way, either. If you have a Sim who’s a friend and think you might want to take things to the next level, simply scroll all the way down in the interaction list to ‘More Options’ and you can switch over to Flirty overtures if you wish.

Once you’ve gone on a first date — which once again go off with a 100 percent success rate, because The Sims Mobile is apparently a utopia in that regard — you’ll be able to access all the different romantic stories. At launch, these include:

All of them offer different plots but play and progress in the same manner. Each includes several chapters, which you advance through by playing relationship events. Simply tap on the Sim/diamond icon to bring up your current list of stories, then tap the ‘Socialize’ button to get started. From there, you’ll have at least two and possibly more events at your disposal, with longer events helping to move the relationship along at a faster rate. Best of all, you never have to worry about why the object of your Sim desire didn’t get back to you fast enough, because they will always arrive when you tap the right button.

Them Wedding Bells: How to Get Married in The Sims Mobile 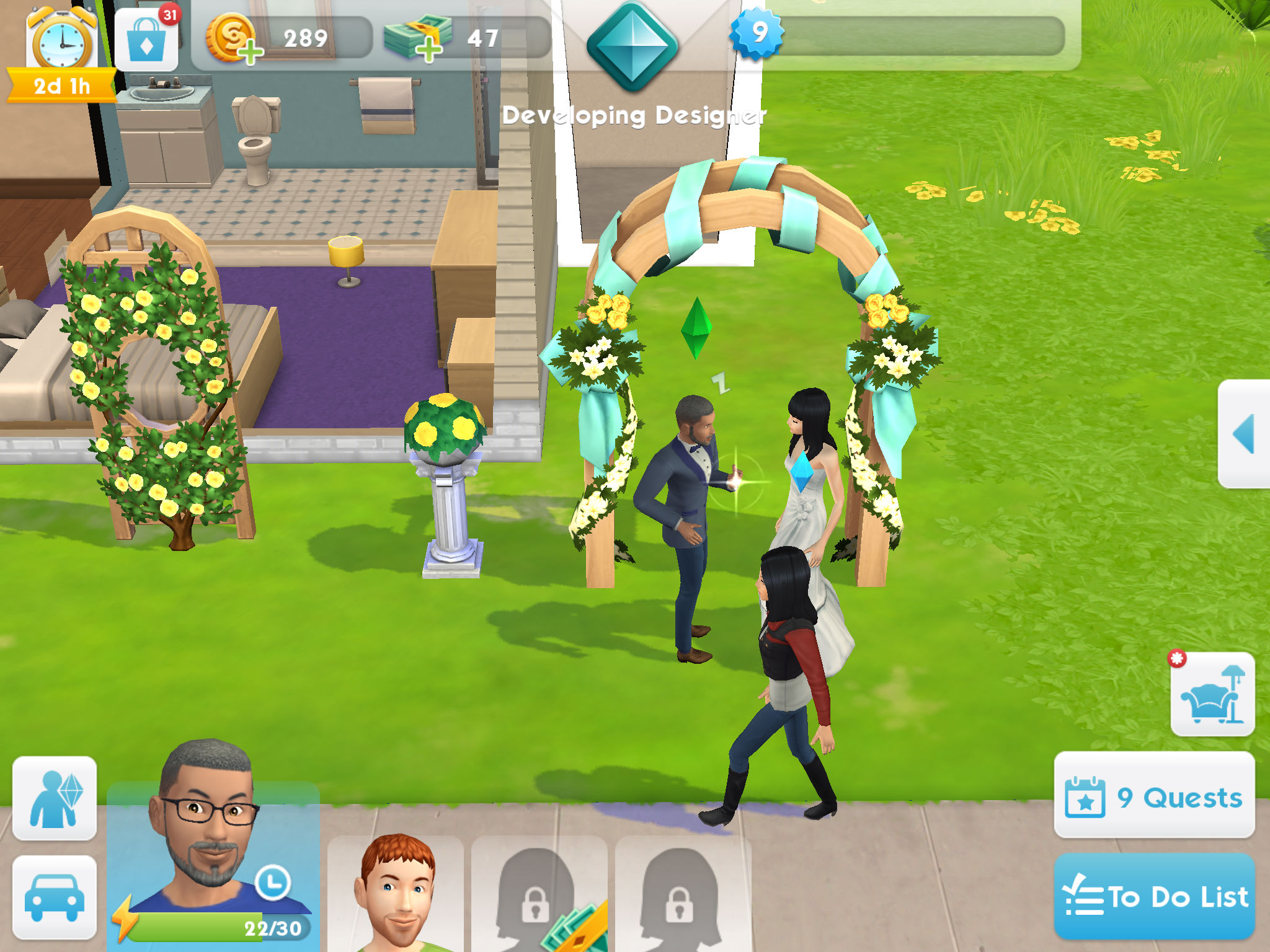 Once you’ve advanced far enough in any of the romantic stories, you’ll eventually unlock the ‘Propose’ event. Simple, right? No asking the father for his blessing or taking time to find wedding venues or anything like that. No fuss, no muss.

Alas, there are a few other things you’ll need before you can get married. No, not a license or a minister to perform the ceremony, but you do have to be at least level 8 in order to take on a spouse (again, either gender, as The Sims Mobile is all about that equal love for everyone).

The other requirement for a wedding is to complete the aptly named ‘Wedding’ collection you’ll find under the ‘Home Item Collections’ section of the build menu. It consists of the Windowed Rose Lattice, Floral Pillar and Wedding Arch, and while you can buy and place multiple copies of the first two items, only one each is necessary to complete the collection. You’ll also need to place them somewhere in your house or its surrounding lawn.

From there, the Wedding Arch will allow you to start the wedding event. Your Sim and spouse to be instantly transform into their wedding clothes and bam, just like that, you’re married. You’ll know it’s for real because the portrait in your house will change to reflect the fact that you now have a spouse.

Interestingly, taking a wife or husband doesn’t make much of a difference in the gameplay. You’ll still be working through relationship stories with that person the same way you did before. You’re also still able to go on dates and pursue relationship stories with Sims other than your wife, because monogamy is apparently a construct only for us flesh and blood types.

The Care and Feeding of Sim Children: How to Have a Baby in The Sims Mobile 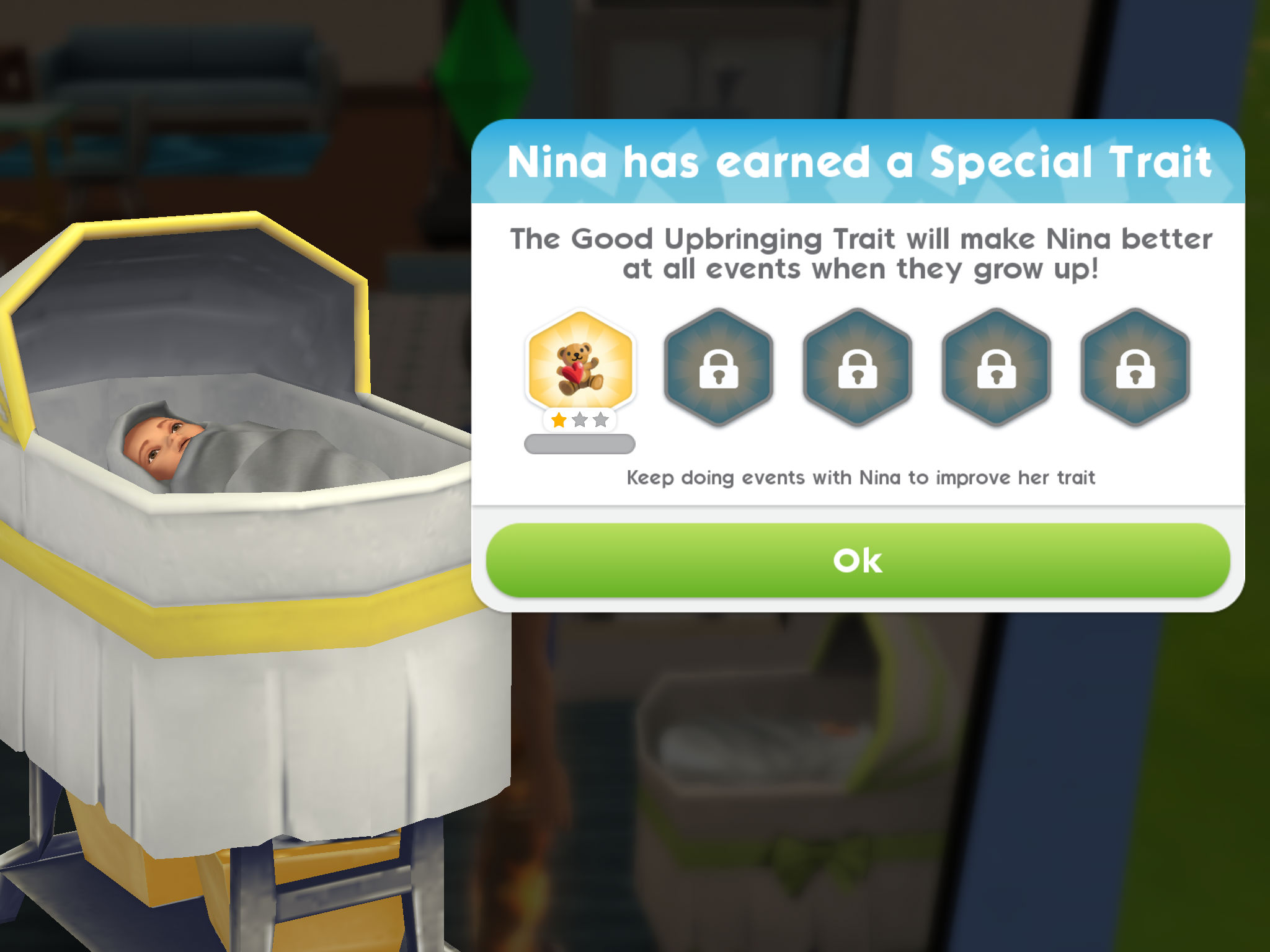 Upon reaching level 11, you’ll unlock the ability to have babies. Note that this has nothing to do with the ‘Wahoo’ action you can do in any bed with your relationship partner, as we’re pretty certain that Sim babies aren’t made that way anyway. A virtual stork is involved, or so it appears.

Unlike marriage, having a child requires you to purchase and place just one item, the Stork’s Visit Bassinet, which costs less than 1,000 Simoleons. Once placed, you can use it to either adopt a child of either gender or have a baby “with" another Sim with whom you are currently in a relationship. We’re assuming you can have a wife and then baby mamas on the side if that’s the way you want to roll.

Once you have a baby … then what? Well, a baby doesn’t have its own stories, but it will appear on your menu with the ‘Socialize’ option of its own. If you go to the bassinet, you’ll be able to perform short actions like checking on the baby or feeding it to earn XP. On top of that, the baby will offer up hour-long events every so often that you play through the same way you do when socializing with adults, except that it takes fewer actions to speed through them if that’s what you want to do.

Caring for a baby can earn it the ‘Good Upbringing’ trait, which will make it more successful at all events when he or she grows up to be a full-fledged Sim. Speaking of which …

Instant Birthdays: How to Age a Baby to a Toddler or Toddler to a Child 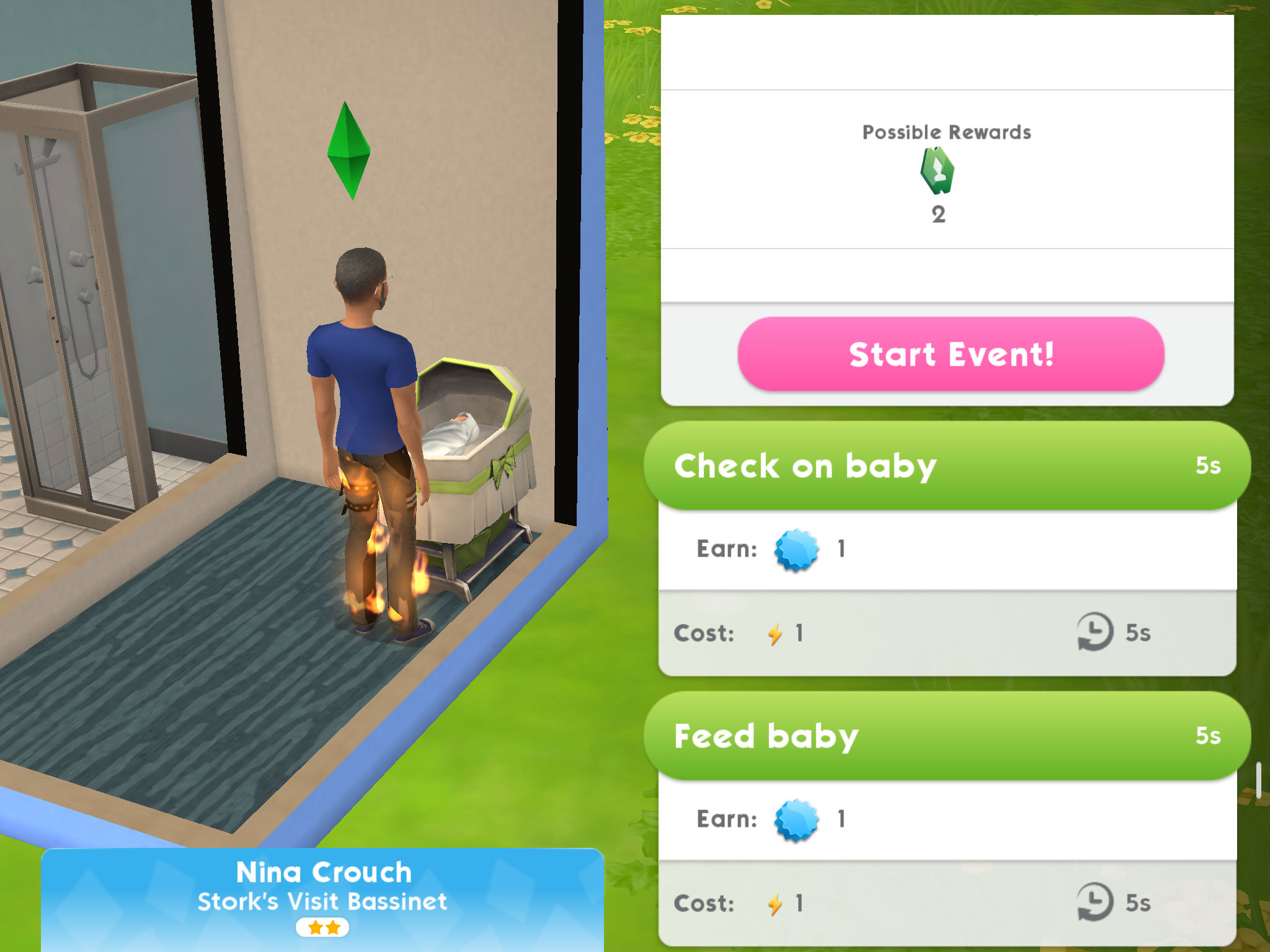 Time may hold all of us in its iron grip in the real world, but it doesn’t have the same kind of sway over the lives of Sims. Instead, you have the power to decide when your baby is ready to become a toddler and when that toddler can graduate to become a bigger child.

You’ll notice when caring for a baby that after a while, they start to have their own thought bubbles just like adult Sims. It’s to be expected that they have minds of their own. If you see one of those bubbles with a birthday cake in it, simply tap on it and you’ll age them to the next step up.

There doesn’t seem to be any time-related rhyme or reason to when the birthday cake might appear, and anecdotally, some players have reported being able to age babies into toddlers within a day of them being born. Sniff! They grow up so fast! Jokes aside, it might be best not to rush it as you can then play through the baby event several times and give it multiple levels of the Good Upbringing trait that will help them later in life.

The strongest argument for having a baby is that it can grow up to be a fully playable adult Sim, eventually replacing the one you had to start the game. See, at level 16, retirement beckons, and while retired Sims are still around in the game, they aren’t playable like they were before. To tackle the rest of the game’s content you didn’t get around to in one Sim lifetime, it helps to have a replacement on hand. Hence, babies. You’ll thank us later. Probably.

For much more on The Sims Mobile, including tons of tips and hints to aspects of the game that don’t revolve around dating, relationships and having children, be sure to check out our general guide that fills you in on how to get the most out of it without sinking in a bunch of money.