The concept of the original Evoland ($2.99) is one of my favorite things ever. Basically you’re playing through an RPG adventure that recounts a large bulk of the history of video games. So you start out in blocky, monochromatic form a la the original Game Boy, and slowly through your journey you unlock things like colors, sounds, 16-bit graphics, and eventually full 3D polygonal graphics. All the while you’re being pelted with references to classic games and gaming culture that hit you right in the nostalgia bone. Being a gamer for over 30 years now, that trip down memory lane in Evoland tickled me to no end, and the gratuitous inside jokes and references to some of the biggest games in history didn’t hurt either. 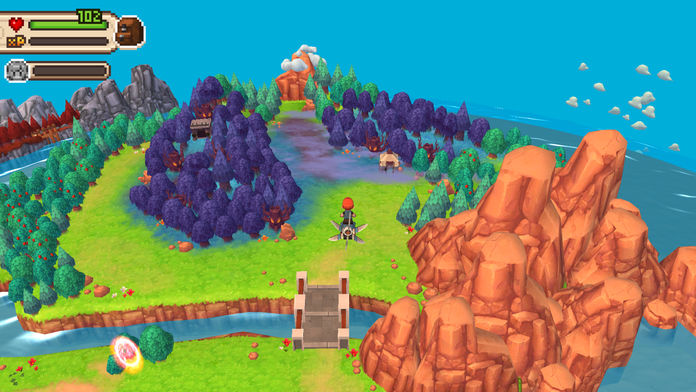 Unfortunately, the actual game in the first Evoland was just so-so. Not terrible, just not memorable beyond its graphics-changing gimmicks. I think that’s fine for what it was at the time and I still enjoyed the game a lot, but I couldn’t help but wonder what might happen had the developer been able to explore the concept as far as possible. The answer is Evoland 2 ($4.99), which launched on desktop back in 2015 and has arrived on iOS this week. Originally the developer of Evoland 2 said it wouldn’t be possible to bring the game to mobile due to its complexity, but Playdigious, the folks who brought the first game to mobile, said “Yes we can!" and spent the next year plus porting it to the touchscreen.

And thank goodness they did! Evoland 2 is SO much more than the first game. Not only does it explore the “history of video games" gimmick even further with all sorts of gameplay types calling back to RPGs (naturally), fighting games, platforming games, puzzlers, shoot ’em ups, and many more. Unlike the first game though, visiting these different gaming eras doesn’t feel like you’re doing it just for the sake of doing it, but it’s actually weaved very cleverly into a much beefier storyline. This really does feel like an evolution (see what I did there?) and improvement over the first game in every way. So if you’re like me and LOVED the concept of the original Evoland, but were somewhat let down by the game itself, then Evoland 2 is just what the doctor ordered and I can heartily recommend this fantastic new mobile version.