Do you love dragon guides? Are you constantly upset about the lack of availability of in-game extras? Do you sit around and think “this game is great but why is it so fricken hard?" Do you hate a well-developed story line? If this is you all day then you need to check out Kidarian Adventures (Free). Kidarian Adventures is a zany new platformer by Russian developer Hard Slime. The game features cute graphics, customizable gear, and little cutscenes that try to keep players intrigued. The gameplay is easy going–think Super Phantom Cat, but without the polish. That being said, this game has certainly kept me entertained – mostly by shear amused confusion. 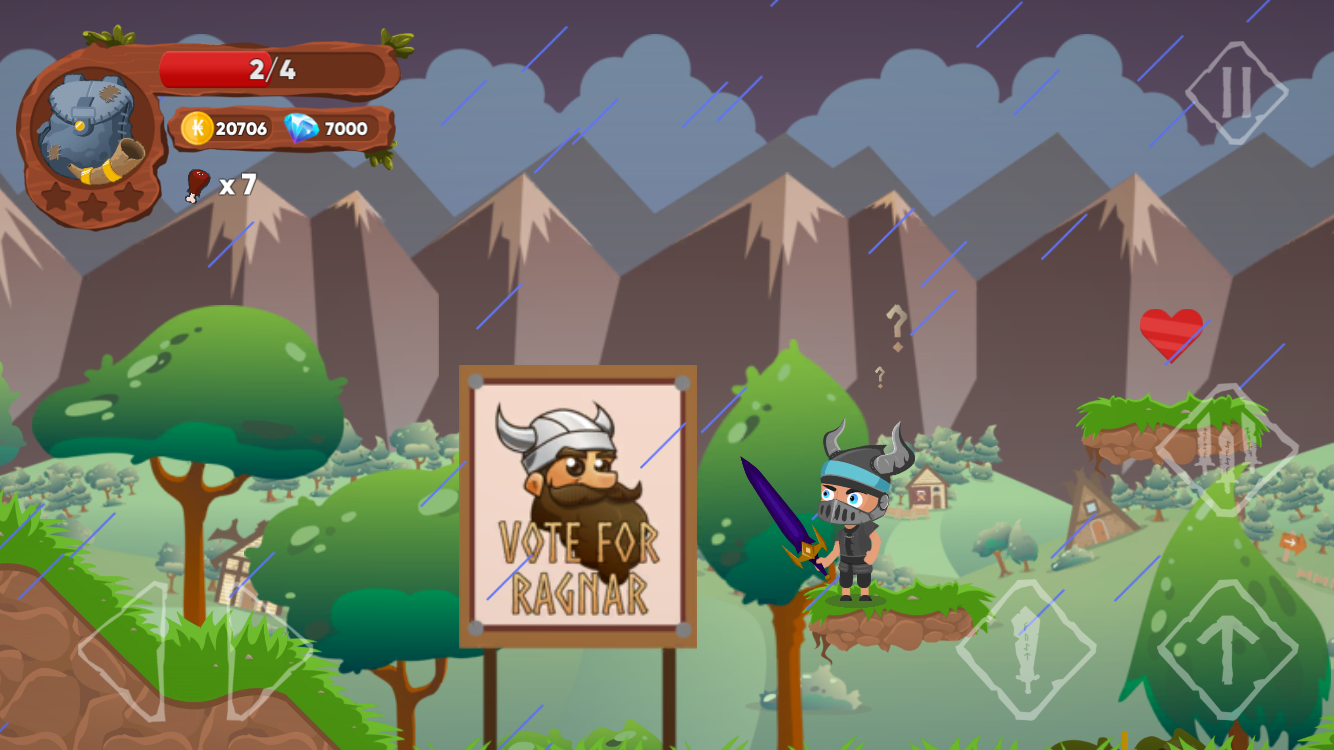 Upon launching the game, players will be greeted by your basic game menu. Anyone who has played a mobile game prior should have no trouble figuring out what to do here. The game currently includes 3 episodes with 10 levels in each. When starting up the first level, players are taken to a cutscene that tries to explain why a (presumably?) ten year old child is fighting against dangerous plants and animals. Not activities I’d normally endorse for the regular run of the mill ten year old. Now here’s where it gets dicey. DON’T BLINK (this is where I high five myself for seamless integration of a Doctor Who reference). Should you blink, you will wish you could go back in time, because you will have no idea what has just happened. So I actually did go back and watch it again so I could figure out what was going on and it’s my job to write this and I felt a moral obligation to get the full story.

It starts out with some unintelligible words being mumbled (t-t-today, jr!) and players see a robed figure, who I named Evil Wizard, that goes around turning cute animals and plants into vicious creatures (it’s just his thing I guess). It then jumps to the ten year old child, who eagerly grabs a Norse-looking helmet and sword from a wall under a picture of someone who can only be assumed to be an ancestor of this kid. Off he goes, to fight evil that would almost certainly lead any strong man to death. Either the developers missed a few marks or they really wanted to help me develop my imagination abilities, because I might have made half of this up in my head. You tell me. 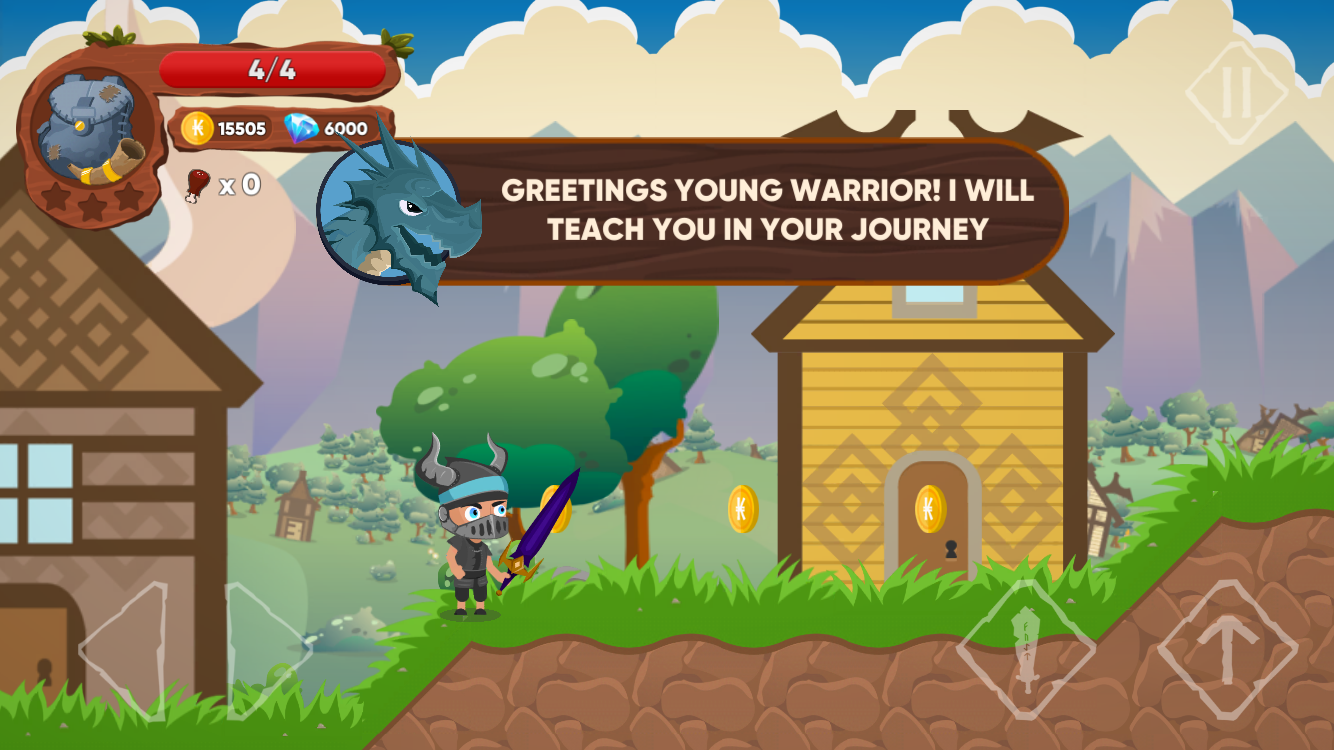 Players then start a tutorial, and this is where things get interesting. Cue the DRAGON GUIDE! Players are guided by a random dragon though the tutorial with no explanation of who this dragon guy is or where he came from. This is where you get to use that imagination to decide for yourself. The English translation in the tutorial can be a bit rough, but it gets the job done, and you’re on your way to playing the game. Like many other platformers before it, the goal of each level is to collect coins, and find the 3 stars hidden throughout the levels. Now if you’re worried about beating the timer, stop worrying now. The game lacks any sort of timed mode, and players won’t gain anything from completing levels quickly, which encourages a slower pace.

The controls are decent enough, with arrows to go forward or backward, a jump button, a melee attack, and a thrown weapon attack. There is not much of a challenge to be seen in the first 9 levels, and perhaps this is because the game is being marketed to a younger audience. If you do end up dying, you can spend in-game currency to rewind time, a neat feature in the game. Interestingly enough, when you reach level 10, you end up fighting the very same dragon that taught you the tutorial in the beginning of the game (you mad, bro?). This battle comes up short on intensity, and plays out rather slowly. After you have pummeled said dragon, you are magically friends again and a cutscene shows the player character and dragon literally ride off into the sunset. At the end of a level, the game shows how many coins are earned, and can double them by watching an advertisement. These coins can the be used to purchase various weapons/upgrades or costumes in the store at the main menu, something the game excels in. 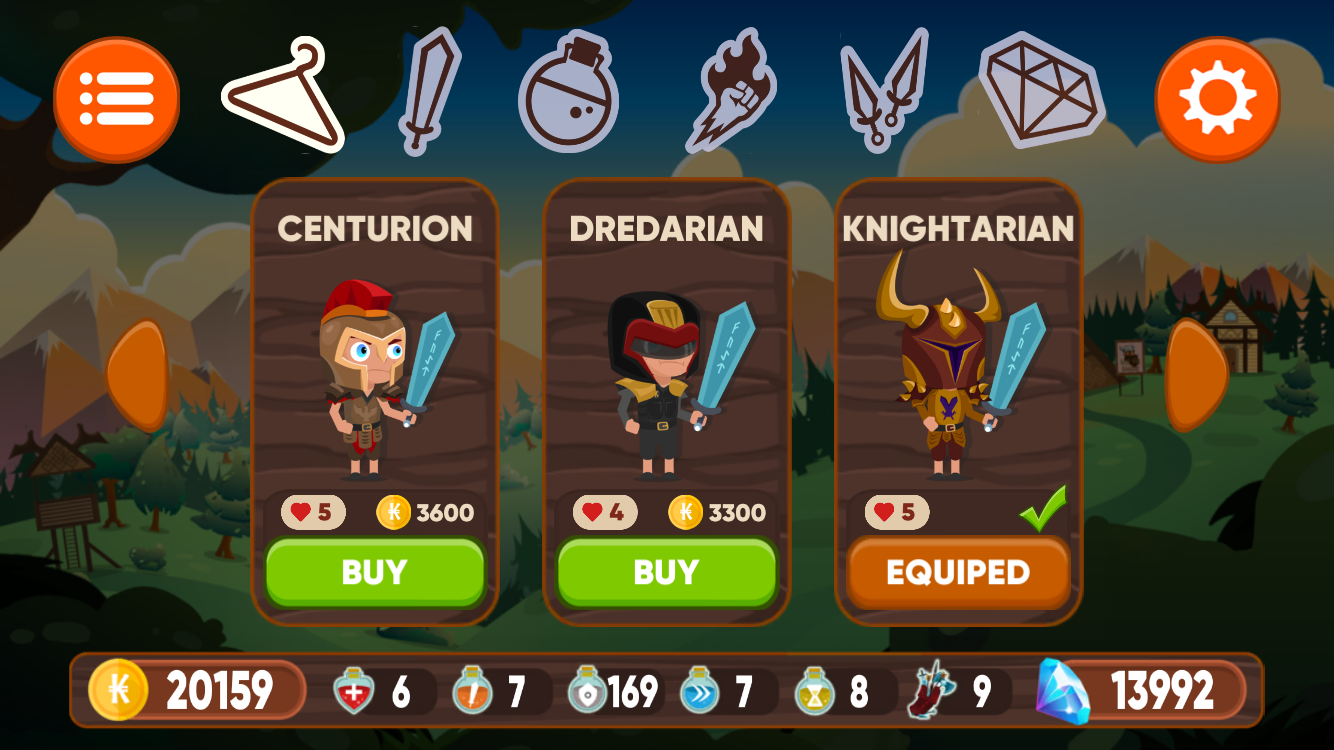 Kidarian Adventures has a vast collection of items that can be purchased with either the coins collected in-game, or with diamonds, the game’s premium currency. The items will affect different stats for the character, like more health, better potion efficiency, or better chances to dodge incoming attacks. There are a great many items, and these range from Judge Dredd-esque costumes to throwable legs of meat. I mean who doesn’t use meat as a weapon?  Unfortunately, with all these great items, the game does a bad job of making you actually want to get them. For example, your health starts at level 3, and the maximum any costume in the game will raise it to is 5. This doesn’t give you much of a reason to keep playing, especially when I racked up enough coins to to buy all the top gear in less than a half hour. If the pre-release version of the game I played is any indicator, then Hard Slime is extremely generous, making it easy to purchase more than enough of whatever items or gear you want, simply by playing the game.

The game continues on at pretty much the same pace throughout, with tiny spikes in difficulty caused be certain types of traps, or large amounts of enemies in small areas. Increasing the difficulty was jumping on or near certain objects making my character “stick.” That coupled with some crashes was pretty tricky. With some polish, I think Kidarian Adventures has the potential to be a hugely successful hit. I had fun creating my own backstory to the crazy blank spots left in the story line. The upgrades and in-game extras were interesting to explore and the game play was intuitive. That being said, without refinement, what we are left with for a discerning mobile gamer is a game that, while having some nice art and a lot of customization, fails to live up to its full potential.