Consistently a hit on the App Store since its release in 2016, Bowmasters (Free) is a quick and simple game of archery. Albeit, archery with a variety of different weapons and skills. Letting arrows fly is pretty easy to do, but nailing your aim is where things get trickier.

We thought we’d run you by the basics behind the game, how best to master your aim, and how to avoid paying up for cool stuff.

The basics of aiming 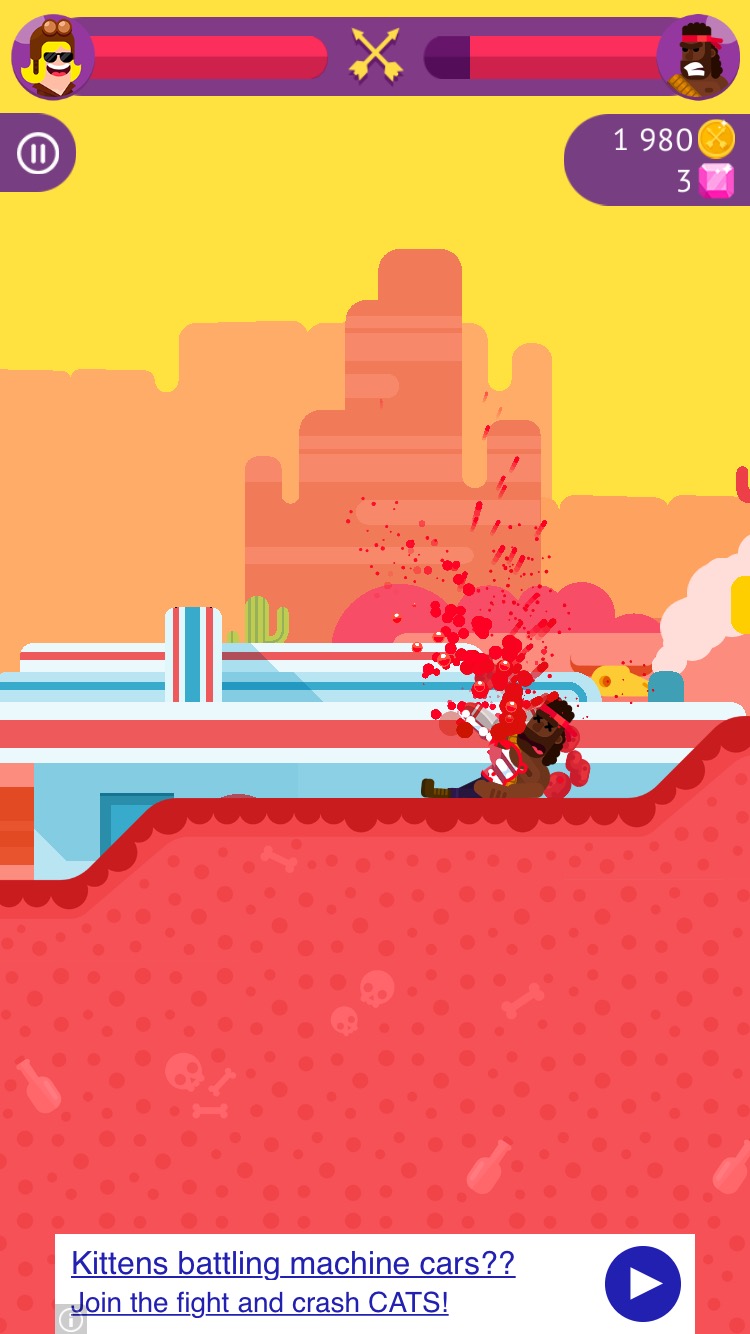 Aiming is easy. Drag your finger around to choose an angle (depicted by the number next to the reticule), and pull back to dictate how much strength you’re going to use. Easy, right? Actually succeeding at hitting your target is where things get harder.

The best thing to do is choose a starting point. Typically, I go with 100% strength and about 13-14 on the angle. If I overshoot, I know to lower the angle, and if I undershoot, I bump it up. There’s a few things to bear in mind though.

For one thing, you’re rarely going to need to use less than 100% strength. The only time lowering it is worthwhile is if your opponent is amongst some very steep hills and the only way you’re going to be able to hit them is to send your arrow or projectile very high. If you keep the angle high and the strength high, your projectile is just going to vanish into space. This is where you lower the strength so, in theory, the arrow falls on top of your enemy. It’s one of the toughest moves in the game to get just right. Fortunately, you won’t need to do it much as the randomly assigned levels are usually fairer than that.

Where you will need to tweak things a lot is when you’re going for a more ‘straight line’ target. Sticking to the 13-14 principle isn’t always going to work at first, even though it’s a nice baseline. 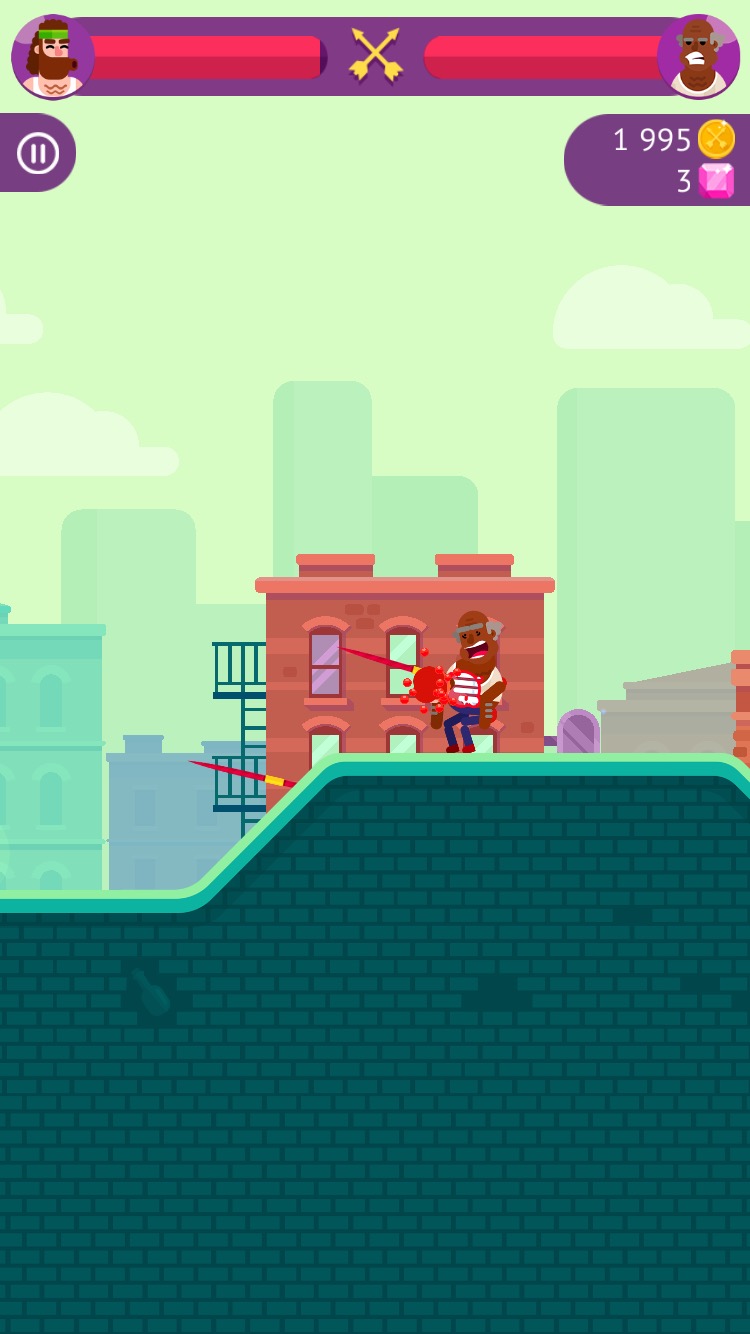 Look out and see where your enemy is. Are they lower than you? Expect to have some hills to traverse. Tweak your angle a little higher so you can skim over those and hopefully fall down to your target. Similarly, if they’re higher, the opposite is true. Keep an eye on the surroundings between you and your opponent. You don’t want to hit the ground by mistake.

Once you do hit your foe, see how they fall. Do they get propelled backwards by your shot? This is especially common if you’re using an explosive weapon like a magic card or molotov cocktail. You need to extend your angle just a teensy bit in accordance to this. Just an extra 1 or 2 will do it usually. If they hit you back, and you fall backwards, you also need to add 1 or 2 to account for that too.

If you find yourself repeatedly hitting body shots, that’s good but you could do better. Tweak the angle up just 1 notch and give it another shot. Odds are you’ll get a headshot which means more damage to your opponent, a faster victory, and some extra coins as a reward.

Make sure you don’t forget what your last shot was. Bowmasters doesn’t remember for you, and if you forget what you were doing, you’re going to have to figure it all out for yourself again. 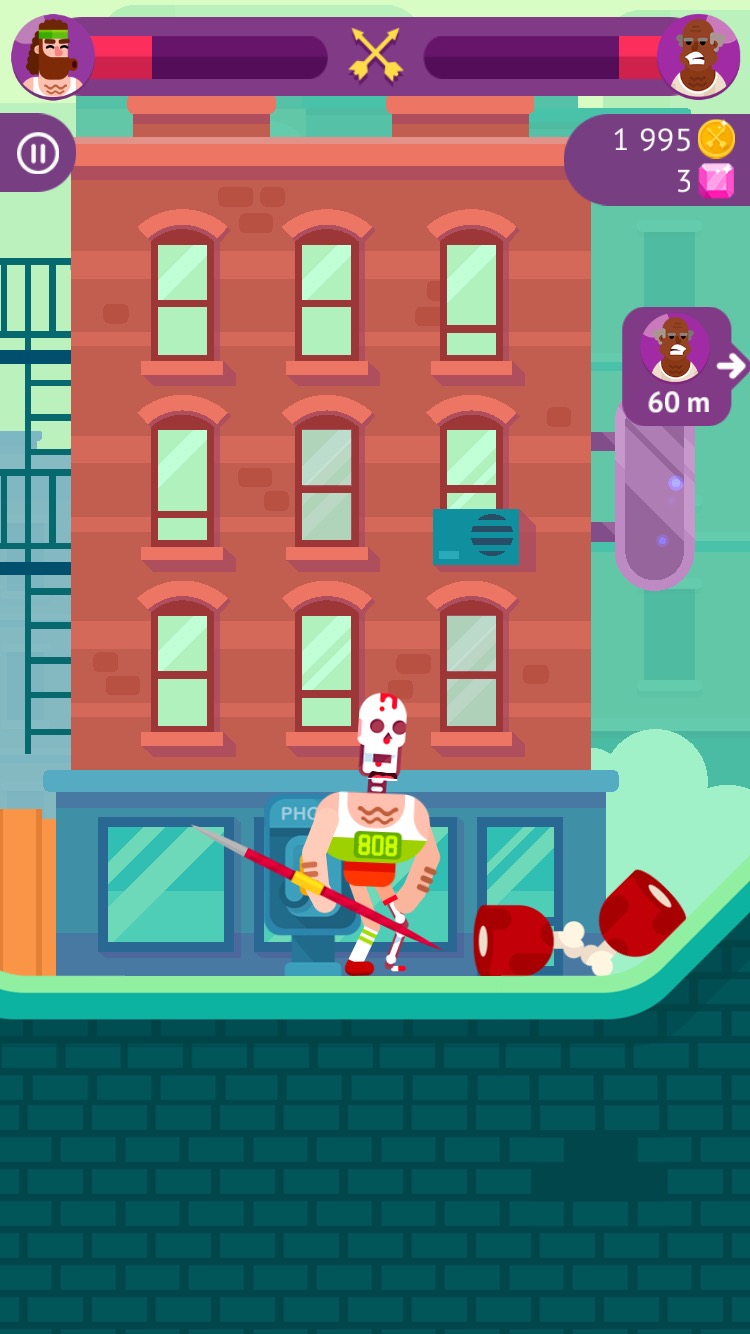 Every weapon reacts differently but you can mostly work this out according to type.

Circular or rotating projectiles such as tomahawks, meat, and chainsaws are very satisfying if your aim is rarely true. They’re heavier so they fly slower, but due to their wide load, they’ll hit the target way more effectively than something thin and straight. Items like the tomahawk don’t always deal that much damage though, despite their size.

Straight weapons such as the spear, flag, or arrow are considered the standard weapon here. They’re small in size and fly straight meaning how you aim them is pivotal to your chances of success. If you’re a good aim, they’re awesome for headshots and inflicting significant damage but they’re unforgiving. You need to work on your accuracy to gain the true benefits here. You want to be able to hit a headshot nearly every time to truly see the benefits, as body shots are often fairly low damage with these weapons.

Numerous weapons offer unique abilities that have to be activated. For instance, the Magic Card can be tapped to unleash multiple projectiles at once. It works well as a scattershot approach, providing you get close enough to your target. The propeller works like a boomerang once tapped, flinging back and hopefully snagging your enemy in the back along the way. There’s a Minecraft style homage too, with a pickaxe that goes flying off at speed. Each of the special weapons can be tricky to master though. Timing when to activate the ability is often tough, and not always actually worth it. If you want quick success, focus on the straight weapons rather than these. Oftentimes, they work better as novelties than genuinely useful weapons.

Some weapons deal more damage than others such as the chainsaw. Try your best to unlock these characters as quickly as possible. How do you unlock them? Mostly via coins. 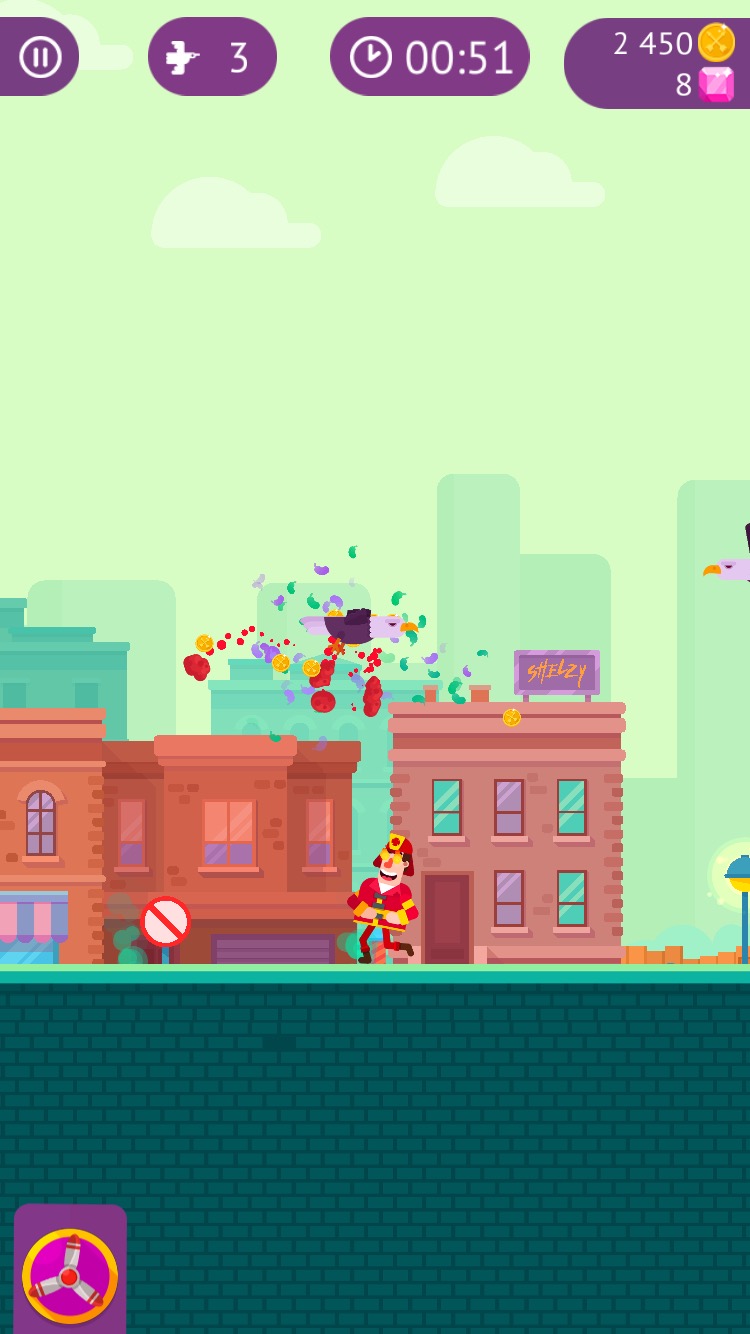 Coins are important in Bowmasters because they’re how you unlock new characters. You can occasionally try out a new character in exchange for watching an advert. That’s great for seeing if you like their play style. However, for permanency – you need to unlock them.

Each day, there are daily bonuses and free chests to unlock, but you can earn them yourself reasonably easily.

Every time you unlock a free chest, you activate the epic chest roulette. This gives you a chance for coins or, rarely, a new character. Some characters can only be won through the epic chest roulette. Flick through the characters. Any with a crown above their head can only be unlocked through roulette so don’t count on getting them any time soon. Roulette almost always hands out coins, although at least they’re usually about 500 or 1,000.

Besides landing headshots and gaining fatality bonuses for ‘finishing’ your opponent, you can also play Bird Hunt or Apple Shooting. These are heavily skills based requiring you to either shoot moving birds or take out an apple on top of someone’s head. It’s worth doing though. In Bird Hunt, you can earn a few hundred coins relatively quickly if you’re a snappy shot.

When playing Bird Hunt, work on snagging any timer power-ups you see so you get longer to participate. Mostly though, just aim for anything that moves.

Apple Shooting is less profitable because it’s much harder. Only really do this for fun or to practice your aim rather than profit. 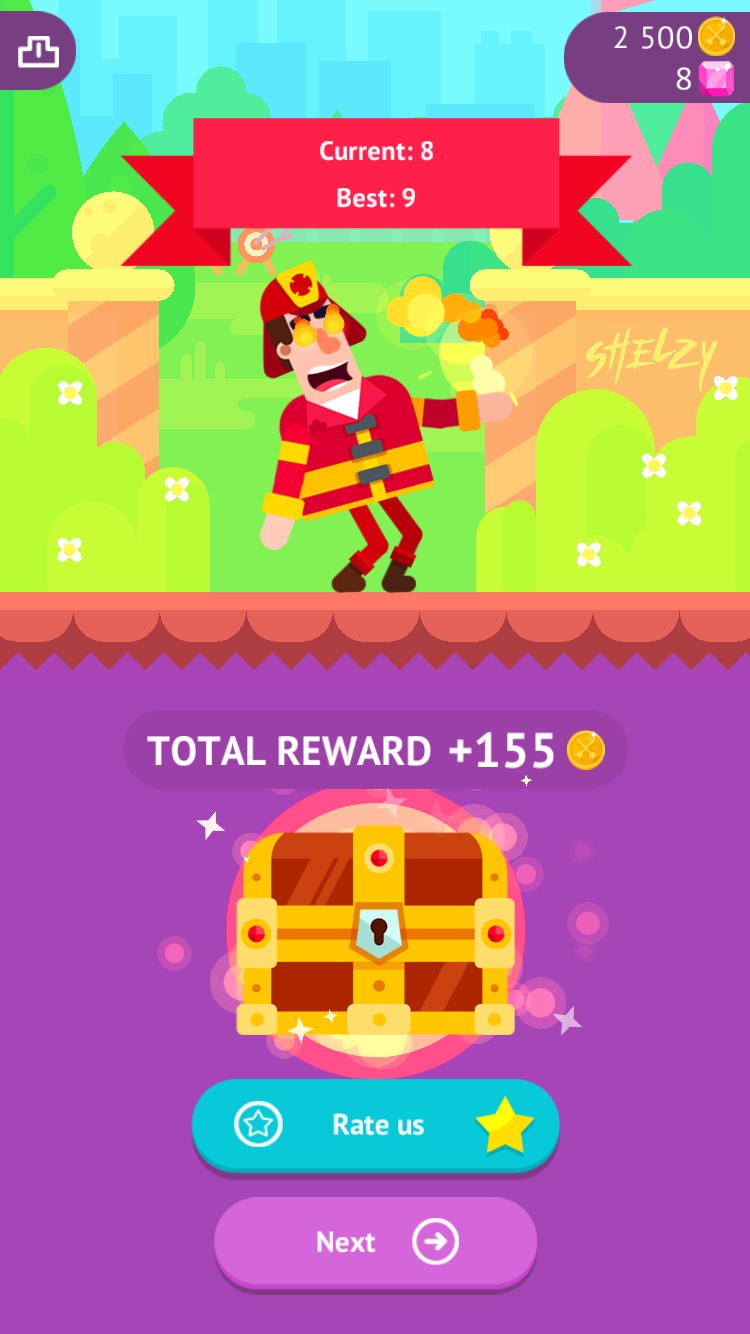 There are plenty of opportunities to watch videos in exchange for coins too. These are tedious to the extreme, but it’s worth it for a quick gain. Bear in mind though – you need to watch videos after every match which gets pretty dull. You can opt to buy a diamond subscription which removes all these as well as gives you regular bonuses, but who wants to spend money every month on this? Just expect each match to take slightly longer while you suffer an ad.

Typically, new characters cost about 5,000 coins. Some cost a lot more than this while others only cost 3,000, but that’s the average amount. Don’t rush into a purchase. Browse what’s available. Crucially, see what weapon they have and whether it fits into your play style. You’ll find yourself preferring heavier weapons or the straighter, more ‘true’ ones. It all depends on how well you’ve mastered aiming, or how much you want to see the blood fly. Heavier weapons are usually more bloodthirsty.

If you lose a duel or tournament battle, you can buy your way back to 50% health with coins or by watching a video. Never waste coins here. It’s expensive and pointless when you could just restart if you really can’t be bothered to watch a video. The only exception is if you’re on the last part of a tournament and you stand to win a lot of coins. Even then, it’s a big risk to take.