Trends come and go on the App Store, this has always been the case. Some trends have been more enjoyable than others, as they ebb and flow with whatever big title is topping the charts at the time. But it seems a new trend is cooking in 2018: MMORPGs, with the charge being led by South Korea’s biggest names in a big way.

Starting with Netmarble which launched Lineage II: Revolution (Free) in November 2017 in the West, but showing no signs of slowing down, Netmarble now has Blade and Soul: Revolution set to release sometime in 2018 in Korea, as well as Tera M, Icarus M, and Seven Knights II. GoBoogie Games has announced Fellow: Eternal Clash for a western release. Nexon has already launched Durango: Wild Land and Yulgang M in Korea on January 25th with a western release planned for both. Kakao Games has announced Blade II: The Return of Evil, a highly anticipated sequel to the very successful Blade. Perhaps a bit of a dark-horse, Mad World from Jandisoft promises to be the first HTML5 cross-platform MMORPG, which we wrote about last summer. 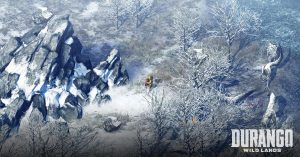 Gamevil has Royal Blood, set to be the first Korean “global one-build” MMORPG, already available in South Korea with other locale launches planned for March. NCSoft is planning to introduce Aion: Legions of War, a new mobile RPG based on its online RPG Aion, in North America and Europe. Com2us is even turning Summoner’s War (Free) into an MMORPG soon, though few details outside of a trailer are available. Last but certainly not least, Pearl Abyss has Black Desert M, a mobile port of the PC MMORPG Black Desert, with already over 2 million pre-registered players which investment analysts predict will bring in $565,000 in daily revenue. 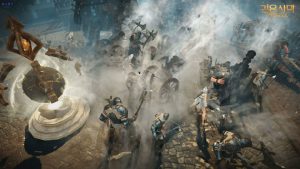 That’s 11 juggernaut mobile MMOs just from South Korea alone. While many of these will see a release in North America, it seems likely some of these just won’t make the cut for the west, as the competition is looking to be fierce. Even if half of these titles launch, that’s still more high-profile MMORPG launches than iOS has seen in any year previous, and that’s just from South Korea.

It’s also probably no coincidence that South Korea just had their first Apple Store open on January 27th 2018, right in Samsung’s backyard, which will undoubtably ignite a turf war between the two tech giants. And with Apple gaining in market share, not only on the hardware side, but now also gaining quite a bit of the South Korean games catalog, we’re in for quite a show from South Korea over the course of this year.

Outside of Korea, the competition is far less fierce, but no less quiet. Jagex is at last bringing the browser based MMO Runescape 3 and Old School Runescape, affectionately known as 2007scape, to mobile in 2018. Maple Story M, available for a short Beta on Android last month is also planning a 2018 iOS launch. Villagers and Heroes, already available for Android is also coming to iOS on February 26th Not to be left out, Albion Online by Sandbox Interactive is already in Beta and looking better by the day. 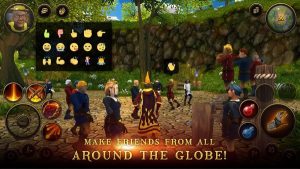 What appeal all these MMOs will have in the west remains to be seen. The traditional MMORPG hasn’t seen the same World of Warcraft level success in recent years, though there are still plenty of popular PC MMORPGs going strong. If the Korean MMORPG craze catches on here in North America, we’re set to see a whole new era of mobile gaming. Not only do these games promise compelling new styles of gameplay but many of them are built in Unreal Engine 4 and look fantastic, and with devices getting more powerful at a rate that is increasing exponentially every year, it seems all the necessary ingredients are present for an all-out, graphics intensive, battery-draining, memory eating, multi-continent, online slugfest from some of the biggest names in mobile gaming.

As an MMO fan, I couldn’t be more excited. Keep an eye out for updates on all these titles in the coming weeks and months right here on TouchArcade.