Once upon a time, most of the card games you’d find in the App Store were of the CCG variety, and with some notable exceptions, not very inspiring ones at that. More recently, games like Reign and its sequel have demonstrated pretty clearly that there are things you can do with cards other than collect them. Enter Meteorfall: Journey ($3.99), a roguelike fantasy RPG that just happens to be built on cards, and one where your skill at deckbuilding on the fly is one of the keys to success.

There is a story involved in Meteorfall, though it’s not the primary focus. As the title suggests, doom is coming to the land in the form of a big rock from the sky, one apparently summoned by an evil Lich. To stave off apocalypse, it’s your job to take one of four different adventurers and journey through several regions, defeating enemies — including bosses at the end of each land — and increasing your strength to the point where you can defeat the Lich. 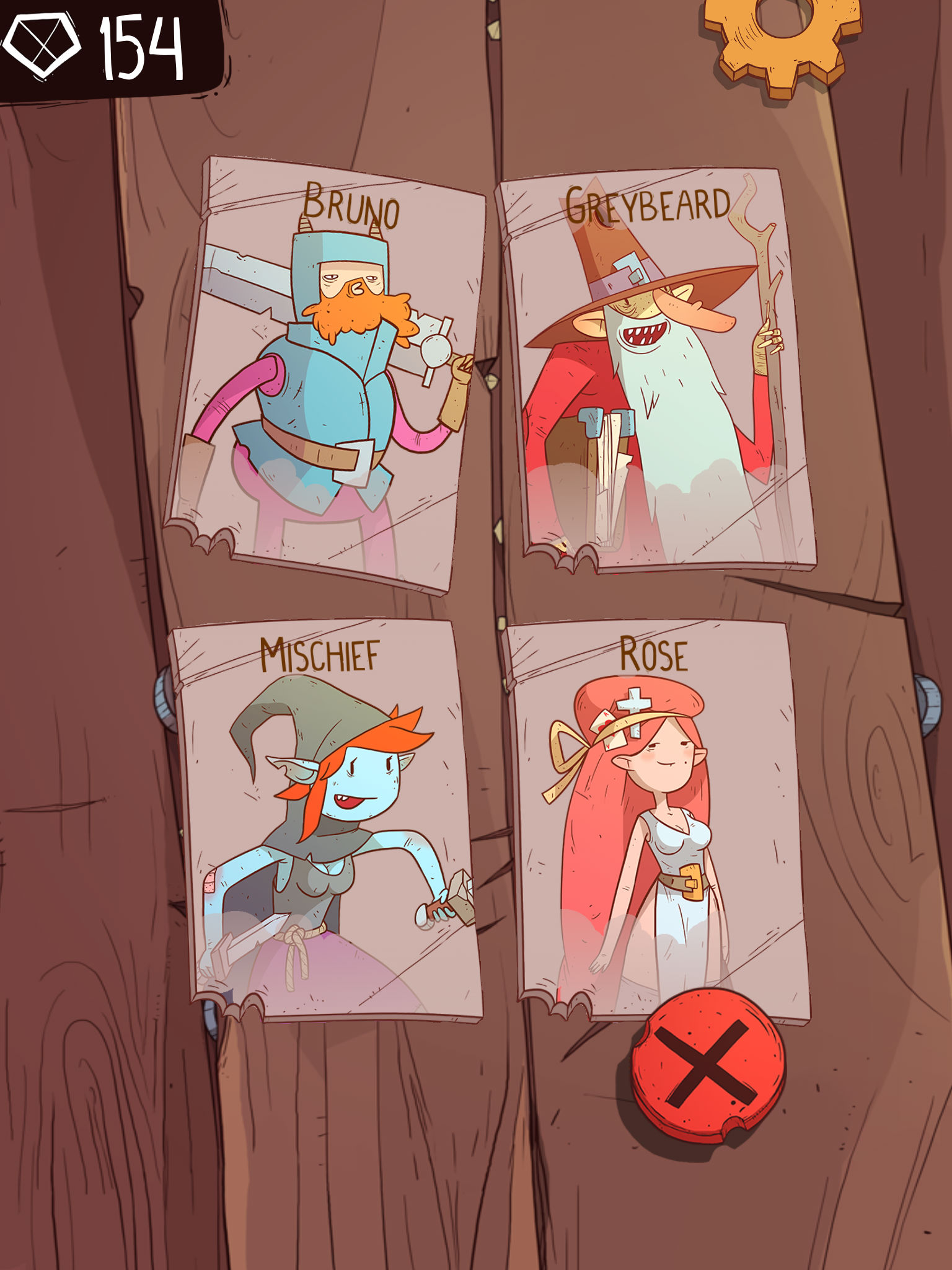 The only tool at your disposal is a deck of cards, but you don’t have to weaponize it a la Gambit. Instead, the cards represent everything you’d expect a fantasy warrior, wizard, thief or cleric to have, including attacks, weapons, armor, spells and more. Your character only has to worry about two stats: health and stamina. That’s about as simple as it gets.

No more is needed because the gameplay in Meteorfall revolves around very simple but elegant mechanics. In each region, you encounter a number of monsters that the game serves up to you as random encounters. You can choose to fight a monster or run from it to gain more health. There’s no penalty for running and it succeeds every time, but if you flee too often, you’ll miss out on the XP and subsequent leveling benefits and guarantee a butt-whooping by the boss at the end of the region. And that’s not much fun in a game where dead is dead. 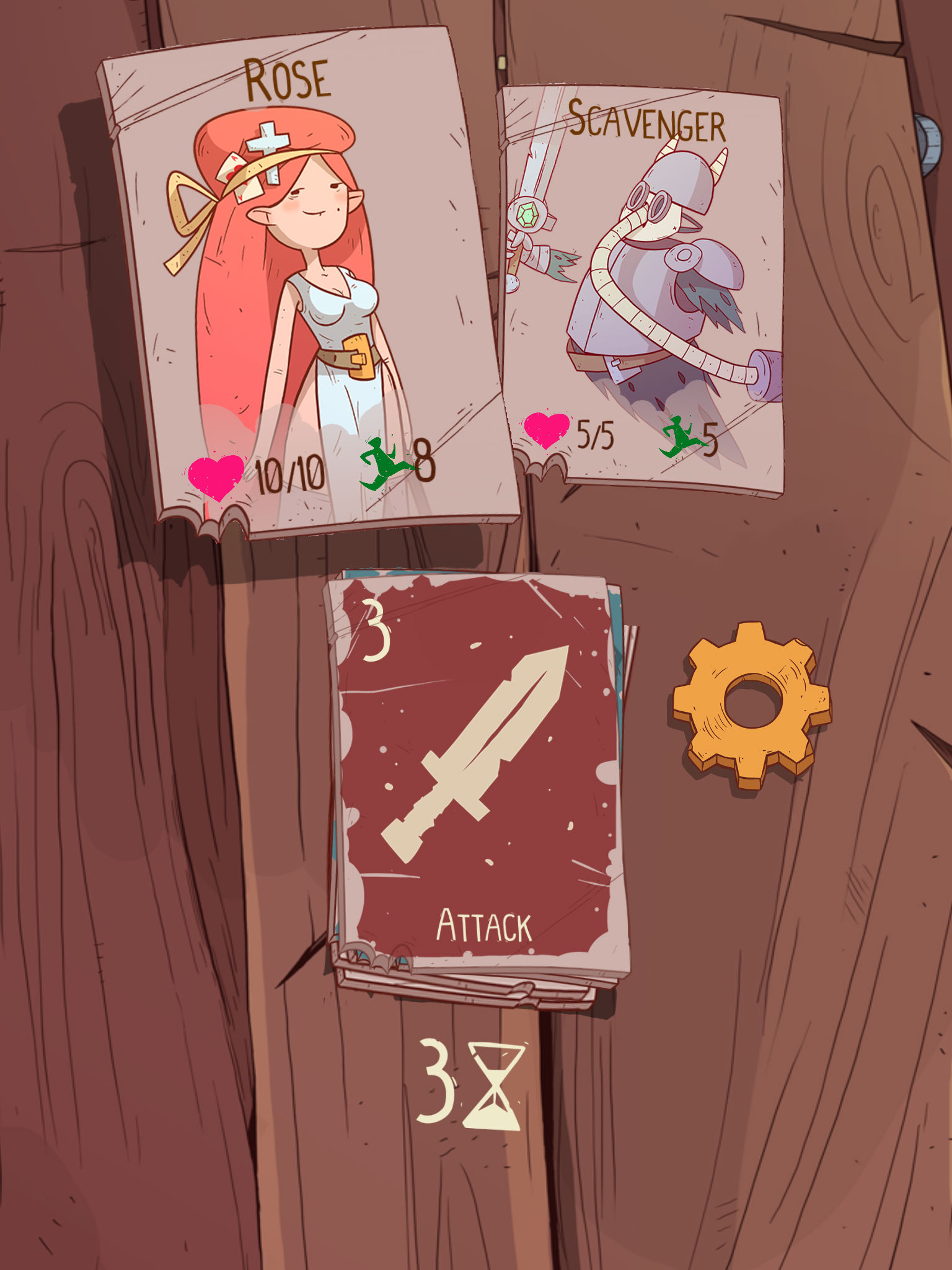 When you do stand and fight, cards are dealt from your deck one at a time, and you’ve got a simple binary choice for each one. You can either play the card, spending the required amount of stamina and using up one of your actions, or skip it and gain some stamina back. After all of your actions are finished, play passes to the monster, which has its own deck of cards (many of which you’ll recognize from the hero side) and is bound by essentially the same rules. A battle goes on until the monster drops and you earn some XP or you die and have to start the game over.

Upon that simple framework, the developer did a nice job squeezing in aspects of more complex card games, including cards that can grant you extra turns or be more beneficial in combination with other cards. I’m a big believer that bigger doesn’t always mean better when it comes to good game design, and that philosophy is something that Meteorfall definitely nails. Enemies scale up in terms of their own stats as you advance, so you never get to the point where you’re going to be breezing right through levels. 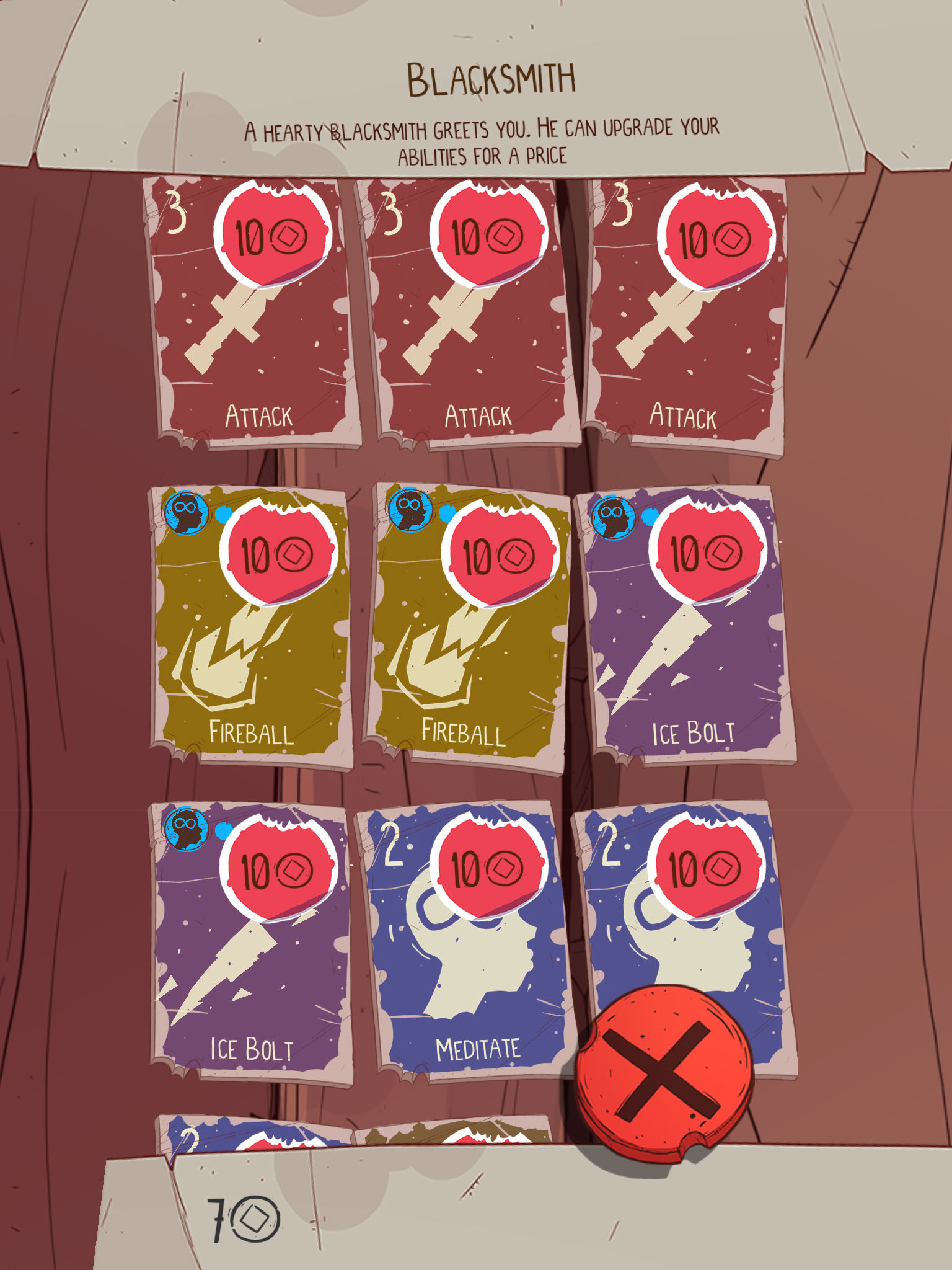 Even better is the extra layer of strategy that comes via the game’s deckbuilding methods. After every few encounters, you’ll be presented with a choice between two different rewards, including the option to get a full heal and spell recharge, dig through a treasure chest for new cards, upgrade cards you already have, and more. There are no class restrictions on cards, so you can add anything you come across to your deck, but as the game itself reminds you, some cards work together more naturally than others.

On top of that, building a bigger deck can backfire on you since you won’t draw your best or most important cards as often. CCGs tend to protect you from yourself in this regard by imposing limits, but Meteorfall leaves you to your own devices to figure it out through trial and error. There’s even a Temple, where you can pray to have a card removed from your deck, in case you start to have some buyer’s remorse along the way. 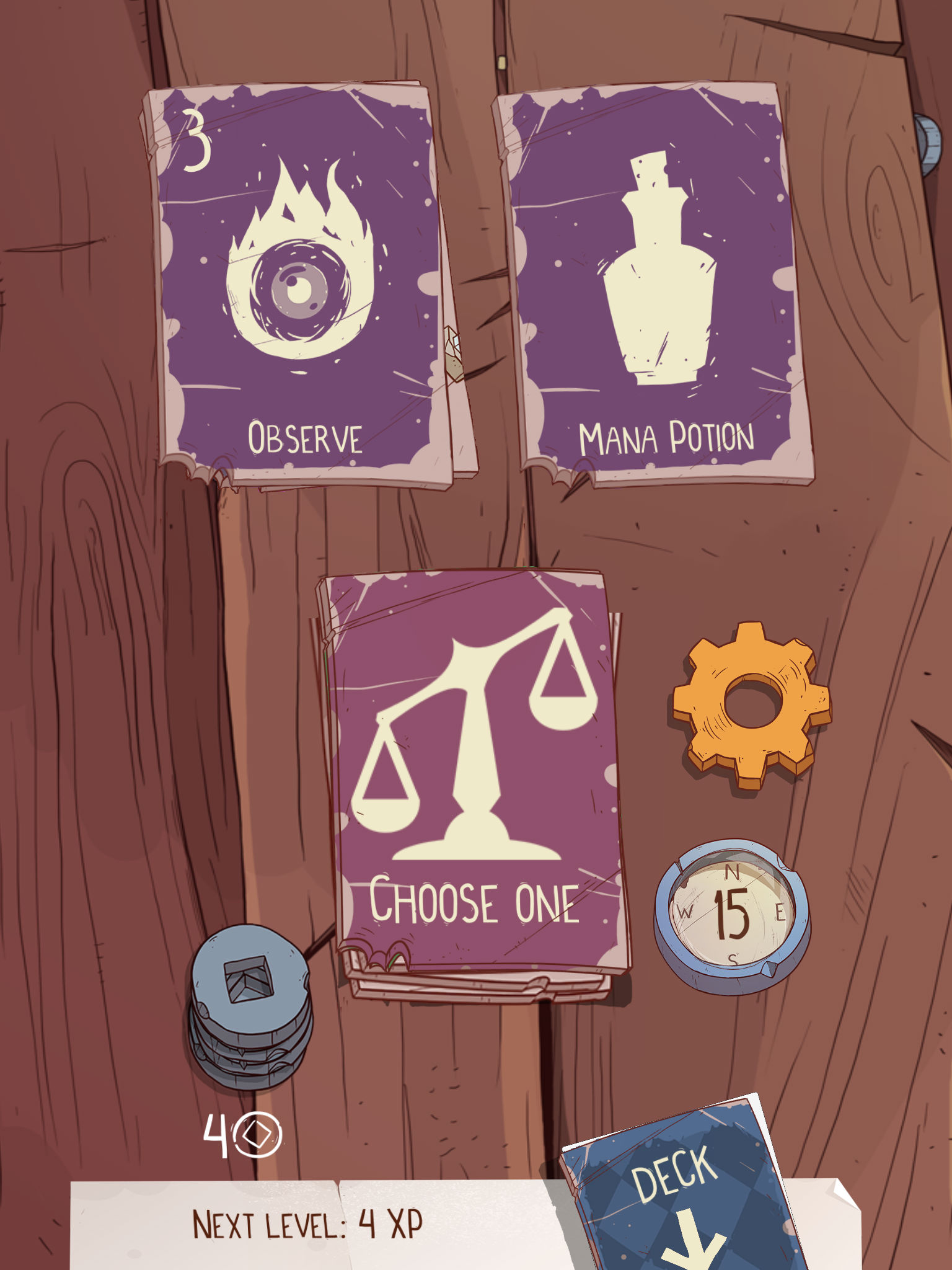 Despite your best efforts, you are going to die, and probably pretty often in the early going. In the best roguelike tradition, Meteorfall gives you the opportunity to spend currency that you earn in one life to unlock powerful cards for use in the next. The further you get toward toppling the Lich, the more you’ll be able to buy, and it’s even possible to unlock cards for a class you’ve never played before if you really want to switch things up.

To set the proper tone, everything in the game is rendered in a cartoonish, somewhat exaggerated art style. Some reviewers in the App Store have noted that it’s reminiscent of Adventure Time, and it’s hard to argue with that. There aren’t a ton of animations, but the ones that exist are well done, and the sound effects fit the action perfectly. The only thing you might find yourself wishing for is more of a soundtrack, but the flip side is that this is a game you could easily play with the sound off and not miss anything. It’s also been pointed out that the game is lacking iPhone X support, but the developer already has an update to address that in TestFlight, so help is on the way there.

In terms of replay value, the random nature of the encounters and the initial difficulty means there is plenty into which to sink your teeth, and even if there never is another card or class or land added, it’s going to be a while until you’ve beaten the Lich and exhausted all of the possibilities in Meteorfall. For just a few bucks, it’s a fun alternative to most mobile card games that still happens to use cards, and it’s a clever enough tweak to your expectations that it will almost certainly make you smile a few times between cursing out your deaths.