One of the things that makes games from developer Michael Brough so great is in how much there is to discover in each one. They’re densely-packed pouches full of Eureka moments, constantly dripping out new tricks, traps, and techniques for those who are patient and observant enough to notice them. His games don’t just trust the player to figure them out; they challenge the player to do so. You really won’t make much progress at all in his games if you’re not willing to play along with this philosophy. It’s a school of design I happen to enjoy, but I do so knowing that it’s just as much of a turn-off for some as it is a joy for others. After all, there’s a fine line between being obtuse in order to teach and being obtuse just to be obtuse. Where that line falls tends to come down to the player.

Brough has made some interesting choices with his latest game, Cinco Paus ($9.99). A Brazilian reader (thank you Felipe) informs me that the title means ‘Five Bucks‘. So far, so true. In US dollars, anyway. As with previous games from Brough, this is a sort of compact roguelite that has you contesting with deadly monsters and trying to make your way to the exit in each room. You have limited resources at your disposal, and there are lots of random elements woven in to make sure that any plans you make need to have back-ups for their back-ups. 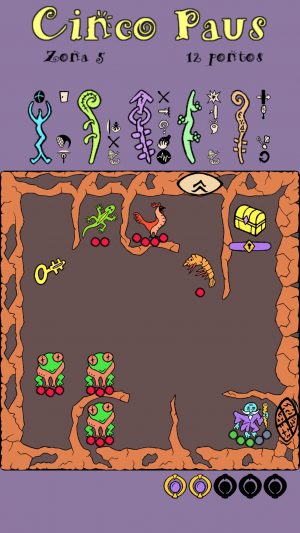 There are two quirks to the game that lend it its own flavor almost immediately. The first, which you may not even notice depending on your first language, is that that game’s text is entirely in Portuguese. This is not a bug. Do not adjust your set. Moving into the game proper, you’ll find yourself playing as a wizard-looking fellow who may, in fact, be a wizard. I surmise this because the character is in possession of a nifty collection of five wands, lined up at the top of the screen for your convenience. Wiz can do the usual basic roguelite stuff. Swipe to move in any cardinal direction, swipe against an enemy to attack it, move over items to pick them up, and so on.

Those wands aren’t just for show, though. Selecting a wand and dragging it down to Wiz will have him fire off a shot in the direction you set it down on. Maybe it will hit something. Maybe it won’t. You won’t be able to use it again until you reach the next room, so I hope you did hit something. In any case, after firing your wand, you might notice some little symbols have appeared next to it in the UI. These are its properties, randomly set with each new game you start. You’ll have to observe each property in action before the symbol appears, so if a wand has the ability to do extra damage to a frog, for example, you won’t know until you zap a frog with it.

Some of the symbols are obvious in their meaning, while others are more obscure. You can tap and hold on them to get an explanation of what each symbol means, naturally. But, you know, it’s in Portuguese. So you have a choice: you can just read it if that language is in your repertoire, you can try to translate it via a variety of means, or you can just try to figure out the meaning by using the scientific method. It’s your call. Some enterprising person has already put up a handy chart of what everything means if you don’t feel like dealing with that layer. Some people also like to peek at their presents before Christmas. Base fiends. 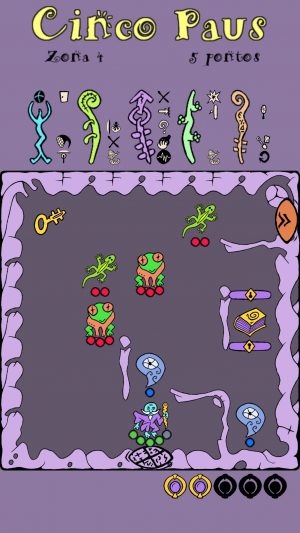 I could try to guess why Brough opted to use an existing (and widely-spoken) language instead of a made-up language that would put everyone on the same level. I could hypothesize that he’s trying to show English players what it’s like to navigate the hobby for so many other gamers around the world whose first languages aren’t English. Maybe he just really digs the language. Perhaps he’s some sort of highly-advanced robot from the future whose language setting was switched, and the switch is on his back where he can’t reach it thanks to the flawed human shape that his creator so vainly molded him into. I don’t know.

It doesn’t really matter, though. If you’ve found yourself trying to play a game in a language you don’t understand before (hey, what’s up, my JRPG-loving friends), you probably already know that a language barrier is really just a surface layer of difficulty. The less text a game uses, the less of an issue it is, and Cinco Paus doesn’t really use a lot of text. You’ll have things sorted soon enough. What the game is really about in each playthrough is in experimenting with those wands to figure out what they do before it’s critical to have that knowledge.

You’ll also need to do the usual roguelike things, including (but not limited to) learning about the various enemies and their behaviors, figuring out what items do, trying to feel out if there are any goals beyond simple survival (not spoiling that for you), and so on. Since your wands change every time you play, you’ll always have a slightly different load-out to try to work with. There are tons of properties and effects, some of which are quite unexpected, so the odds of getting even one wand that behaves similarly to any of your previous sessions are, I’d imagine, quite low. 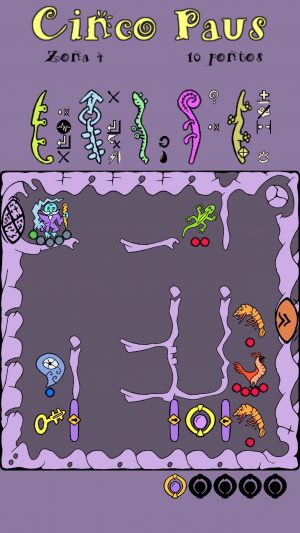 I love that you more or less start out with most of the arsenal you’ll ever have available to you, but have no idea what you’re actually holding on to until you make extensive use of it all. It’s an interesting flip from the typical roguelike/lite script. At the same time, building the game’s core mechanics around the familiar process of waving sticks at things to find out what they do makes this feel nice and cozy for any genre veteran. The items throw in an extra element of chaos to keep you from getting too comfortable, as well.

Like most games from Brough, this isn’t exactly a looker, but it gets by well enough and has a certain style to itself. The look isn’t too far off from Imbroglio ($3.99). The audio mostly hangs out in the background, with a trippy feel to both the sound effects and the mellow background music. The game supports leaderboards via Game Center that I absolutely do not recommend looking at if you’re feeling good about your best score. Granted, a quick glance will tell you all you need to know about how deep this game’s mechanics go in the long run. I expect people will be playing and taking Cinco Paus apart for a long time to come.

If you’re a fan of Brough’s other games, this review was likely a pointless exercise. You already bought Cinco Paus. I can see it on your home screen. Put on some pants, friend. Similarly, if you’ve been turned off by his games in the past, I’m not sure anything I’ve said here will convince you that this is your magic moment. If you’re new to this developer’s games I think this is mechanically a nice one to start with, but the language thing might be off-putting so I’d probably point you towards 868-HACK ($4.99) instead. All I know is that good old Papai Noel brought me a great new game from one of my favorite developers this year, and I’m pretty happy about that.