The Dark Souls series is an extremely popular game franchise that is infamous for its brutal difficulty, methodical combat, and merciless boss fights. I especially loved the series’ “spin-off", Bloodborne on the Playstation 4. As usual, I enjoy discovering games on the App Store that are similar to some of my favorite games on console or PC. Luckily, Animus- Stand Alone ($3.99) proudly wears its Dark Souls/Bloodborne inspirations on its sleeve! Many people believe that imitation is the sincerest form of flattery. Let’s see if this saying holds true, shall we?

Animus is set in a dark and dreary world where everything wants you dead, whether it be scorpion-like monsters or a gigantic black knight wielding a shield and sword that are almost as large as himself. Your main goal is to escape this horrible place (or die trying) by defeating various groups of enemies, as well as several bosses. Fortunately, you have a friendly and informative guide named Lethe to help give you hints/tips on how to persevere through the numerous dangerous situations you find yourself in. 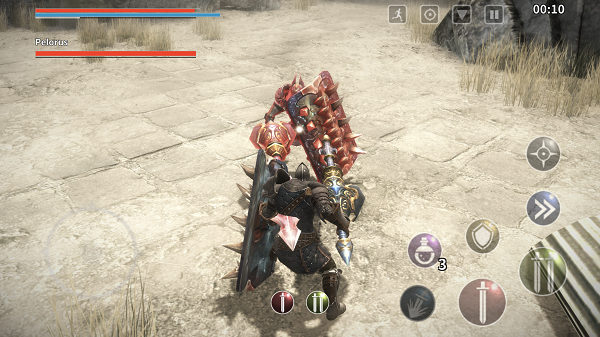 As soon as I booted up the game, I could immediately tell that the graphics of Animus are top-notch and thoroughly detailed. I really appreciated seeing the glint of the sun on my armor and the intricate designs of various armor pieces, weapons, and enemies. The aesthetics of Animus give off a strong Dark Souls vibe and I love it. The sounds of clashing metal, the clinking of heavy chain mail, and the disturbing screams of enemies all added further depth and detail to the game’s beautiful visuals. However, it’s important to note that these visuals come at a cost to your device’s battery. You need to make sure to turn down the graphical settings of the game if you want to conserve your battery, especially if you are playing the game on a phone.

Animus is divided into several sections of levels that contain different enemies, bosses, and potential loot drops. Loot drops can come in the form of gear, weapons, currency, and materials. Gear can cause drastic changes to gameplay, as well as the look of your character. It will feel completely different when you use a spear, in comparison to a sword. Equipment in the game has different stats that attribute to their own strengths/weaknesses. Currency and materials are used to level up your existing gear. Animus’ loot system feels a lot like the loot system of a Monster Hunter game, where you can find yourself in the addicting loop of grinding for specific materials and gear to become stronger. The stronger you get, the stronger bosses you will be able to defeat. I love the Monster Hunter series and this was an added bonus for me. 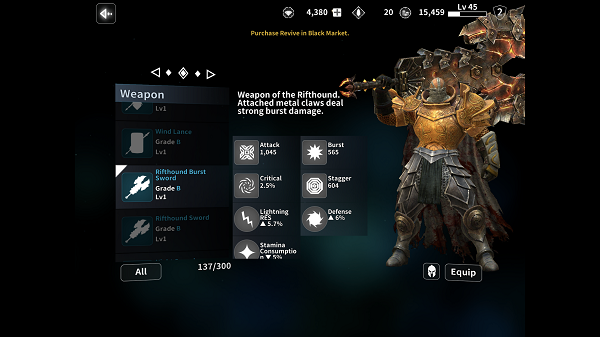 Choosing to not have an open world is one aspect in which Animus strays a little bit away from the Dark Souls formula. However, I think this is a perfect deviation for the game to make since it can facilitate shorter play sessions, depending on how much time you have on your hands. Either way, you will be making progress towards more loot, better gear, and harder levels/bosses.

Each level takes around 5-10 mins to complete. You will encounter small hordes of weaker enemies that each have different move sets and behaviors. Their move sets and behaviors need to be learned and memorized for future encounters. Bosses will be waiting for you at the end of each level and each one is unique. This is where the game truly shines. I felt like I was constantly improving my skills at the game and learning how to defeat these difficult bosses. It was rewarding to finally defeat a difficult boss (that previously kicked my butt) after becoming better as a player.

The combat of Animus feels heavy and impactful. It is a bit faster-paced than the combat of Dark Souls but it still scratches the same itch. You have the ability to heal, block, dash, and combo two different types of attacks. As you land blows on enemies, a special ability meter will charge up. You can use different attacks once you activate this ability and it changes up your combat style significantly. I had to learn when certain situations required me to use each of these actions and I was severely punished for any missteps. Its the survival of the fittest in Animus. You must adapt or die.

Fortunately, the controls did not hamper combat in any significant ways. The buttons are responsive and their specific layout makes sense. When I died I knew it was my fault. However, I must say that something feels a little off with the joystick. It’s a bit “floaty" and doesn’t seem to be as responsive or accurate as the rest of the game’s controls, especially on my iPad (2017). I didn’t notice this problem as much on my phone but it is still present. It could be due to my personal preferences but I figured I would mention it nonetheless. Just keep in mind that the controls are still great.

All in all, I have sincerely enjoyed my time with Animus- Stand Alone. It exemplifies the aspects that make the Dark Souls franchise so fun while condensing them down into a near-perfect package for mobile. The grind for cool-looking gear was a blast and I enjoyed feeling myself get stronger/better as a player. Animus- Stand Alone is currently the closest you will get to Dark Souls on mobile and it deserves to be commended for that fact alone. I highly suggest you give the game a look and feel free to check out other people’s impressions of Animus- Stand Alone in the game’s forum thread.