I grew up in the Chicago area, and our weather can be notoriously extreme. We get some ridiculously hot and humid summers, then winters which are so often brutal that when a day rolls around where it’s “only" 40º F out we’ll be wandering around outside in t-shirts like it’s the middle of summer. Once I discovered chemical hand warmers like these, I pretty much always carried a pair in my coat pocket ready to deploy when the windchill gets too severe. The problem with chemical hand warmers is even when you buy them in bulk they’re around a buck a pair, and there’s a major psychological barrier to actually using them since they’re consumable. It’s kind of like how you can play through an RPG conserving health potions so much that by the time you beat it you’ve got a massive stockpile you could’ve used the whole time. A few years ago I discovered Zippo Hand Warmers, and they’ve been a total game changer. For a few cents worth of Zippo fluid you get hours of warmth- Zippo says up to 12 in total, if you’ve got the larger of their two hand warmers and you fill it all the way, although I’m fairly certain I’ve gotten more than that.

Their traditional hand warmers come in two varieties: A 12 hour model, and the significantly smaller 6 hour model. Amusingly enough, as of this writing they’re about the same price with the 12 hour version selling for $12 while the 6 hour version sells for $13. The way these things work is they come with a little measuring cup thing that you fill with Zippo fluid then slowly pour inside after taking off the burner. You snap the burner back on, light it with any ignition source, put the chrome cover on, and you’ve got hours of heat.

They use a catalytic heater which creates heat from the Zippo fluid without ever actually producing a flame. It’s like carrying around a little smoldering ember in your pocket. It’s seriously just dumb how well these work, and how cheap they are to use. If it’s a cold day, I’ll just light mine up before I leave the house and really not even worry about whether or not I ever even need to use it.

I’ve given these things as gifts to practically everyone I know, and people seem divided into two camps: Those who love ’em, and folks who are sort of weirded out about the idea of having something that seems to be on fire in their pocket. I just sort of gave up on the second group, as it’s hard to convince someone that these things are totally safe, particularly if you can’t really explain how the catalytic process they use to create heat works in any way beyond “It’s just some kind of black magic." 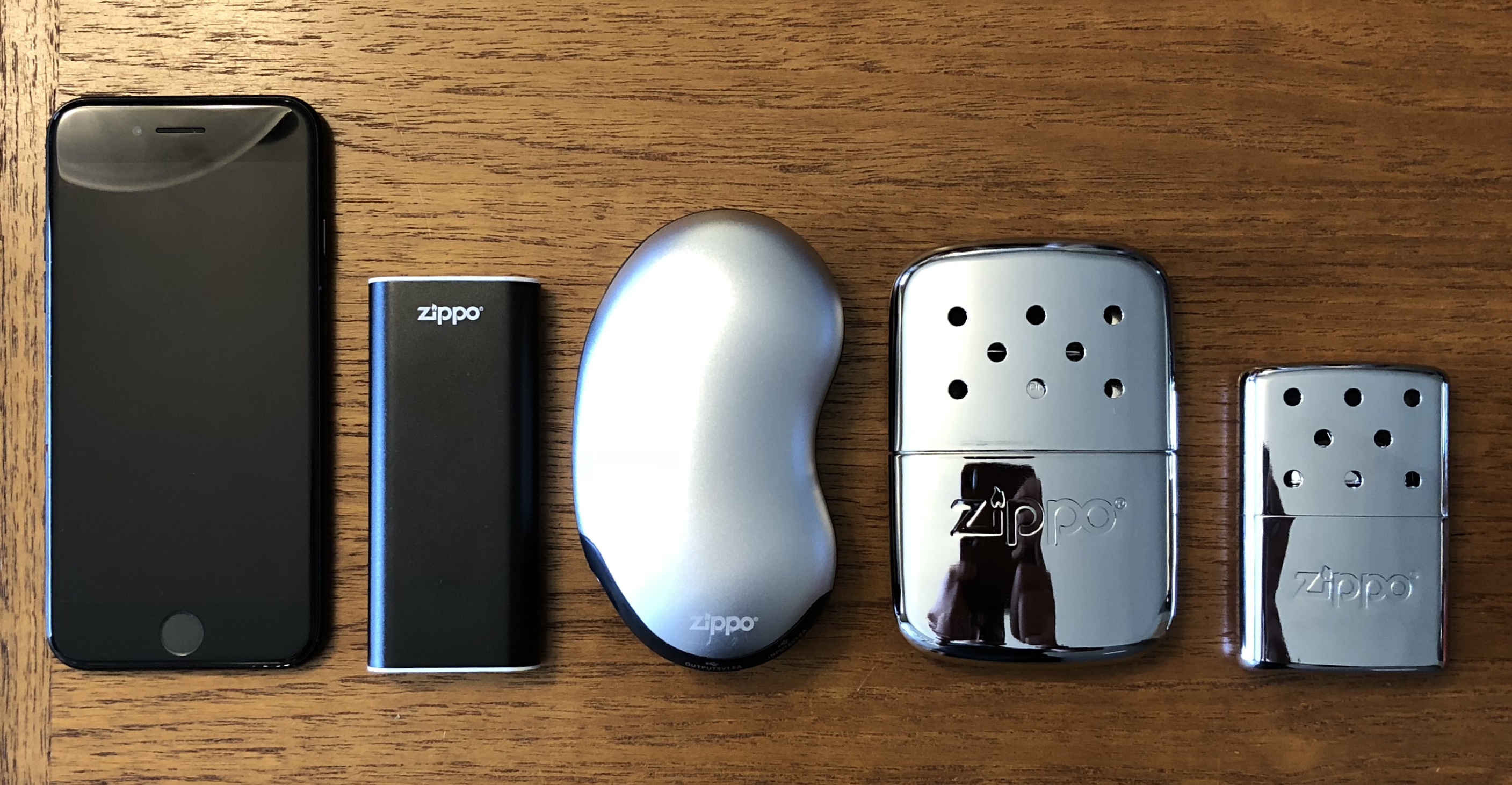 (iPhone 7, next to the lineup of Zippo hand warmers.)

Then, the effectiveness of Facebook advertising came into play. I was scrolling through my Facebook feed, and I saw a Facebook ad for a potential better alternative- Particularly if you’re into gadgets that multitask. Zippo has released electronic, battery-based hand warmers that come in two varieties: 6 hour 5,200 mAh and 2 hour 1,900 mAh. They’re $38 and $25 comparatively, which is quite a bit more expensive than the traditional chrome models… But when you consider you never need to buy Zippo fluid, the difference might (very slowly) make up for itself, depending on how much you’re paying for power to recharge them.

These electronic models have two major advantages over the old-school versions: First off, you can turn them on and off whenever you want. You just hold the button on the side for a few seconds, they turn on, then you can use that button to toggle between high or low heat levels. When you don’t need it any more, you just hold that same button down to them them off. Comparatively, you light the O.G. Zippo hand warmer and just let it ride. Zippo says you’re supposed to let them burn out, but I’ve just taken off the burner before with a small pair of pliers to “turn it off" by separating the burner from the fuel. It works, but is nowhere near as easy as just pressing a button.

Better yet, these things feature a full-size USB port which just adds an absurd amount of utility. Instead of carrying around a traditional hand warmer, that can only be used as a hand warmer, and requires a lighter to get going… You’ve got a hand-warmer that can be used to charge your iPhone and all your other USB devices. (If you’re looking for a super short Lighting cable, I like these by Amazon Basics.) They get nice and warm too, both were a hair under 110º F as measured with my infrared thermometer after being turned on for 10 minutes or so and fully warmed up.

I’ve got to admit, this article has been weird for me to write. When I reached out to Zippo to get them to send me a couple of their battery-based hand warmers, I was sure they’d be inferior to the traditional fuel-based models that I’ve been using for years. Instead, I’m really not sure, and I think you could make strong arguments to buy anything from the whole product lineup. If you want to go cheap, durable, and reliable, you can’t go wrong with the old school models. I’ve been soaked to the bone in weird snowy rain slush (It’s a thing we get in Chicago!) and my old chrome Zippo hand warmer was still going strong.

However, if you’re not in an extreme winter environment where you’re worrying about things getting wet, and see equal utility in carrying something that can warm you up and charge your iPhone, the electronic models are surprisingly great. They’re also super user friendly, as anyone who has charged a USB device can work these, whereas dealing with Zippo fluid can be a little intimidating to folks new to the Zippo ecosystem. Also, if you’re not a smoker, or have no reason to carry around a lighter/matches, I think the electronic ones automatically win out.

Either way, I was really surprised by the O.G. Zippo hand warmers when I first discovered them, and am pleasantly surprised by the new electronic ones. If you’re looking for gifts this holiday season, these are some good ones to consider.

At our request, Zippo sent us both models of their electronic hand warmers. Also, all the Amazon links in this article go through our Amazon referral ID so we get a (very) small payment through Amazon’s affiliate program if you buy any of the products mentioned in this article. Like everything we post on TouchArcade, we stand behind these recommendations regardless of whether or not we got free stuff. Buying things mentioned in this article, as well as doing your Amazon shopping through toucharcade.com/amazon helps support the site so we can keep covering the latest and greatest iOS games every day.