When it comes to the noble hobby of video gaming, there are a whole bunch of tried and true concepts to build new products from. Not even one of those concepts involves mashing onions as quickly and strategically as possible in order to make fruits appear that you mash to rack up points while space cows trot across the bottom of the screen and little cartoon characters throw off their clothes and embrace passionately in the starry sky. But thanks to Million Onion Hotel ($3.99), we can finally live the dream, friends. This is a fast-paced yet strategic arcade-puzzle game, and if nothing else, I can say that you probably haven’t ever seen anything quite like it before. 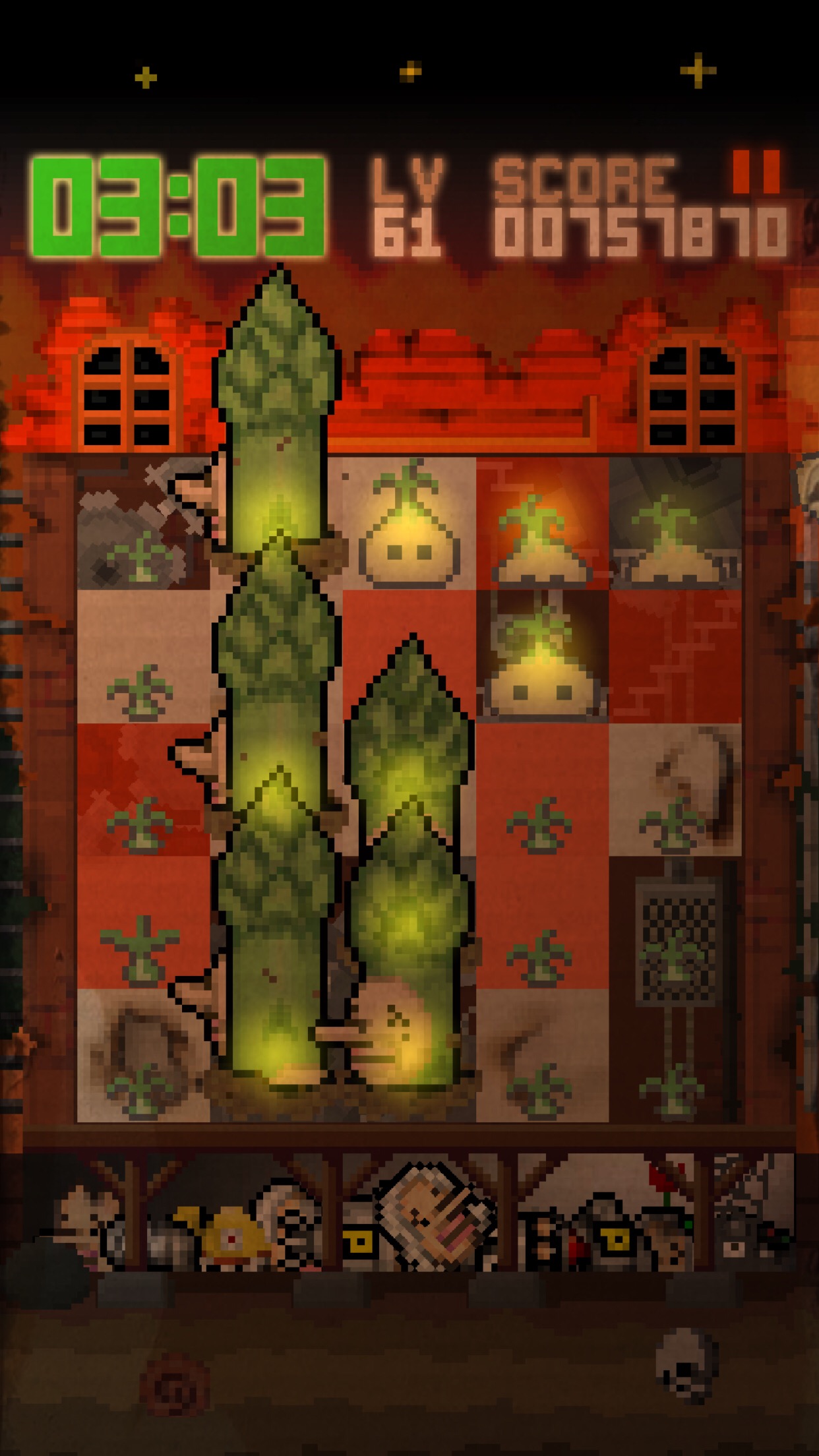 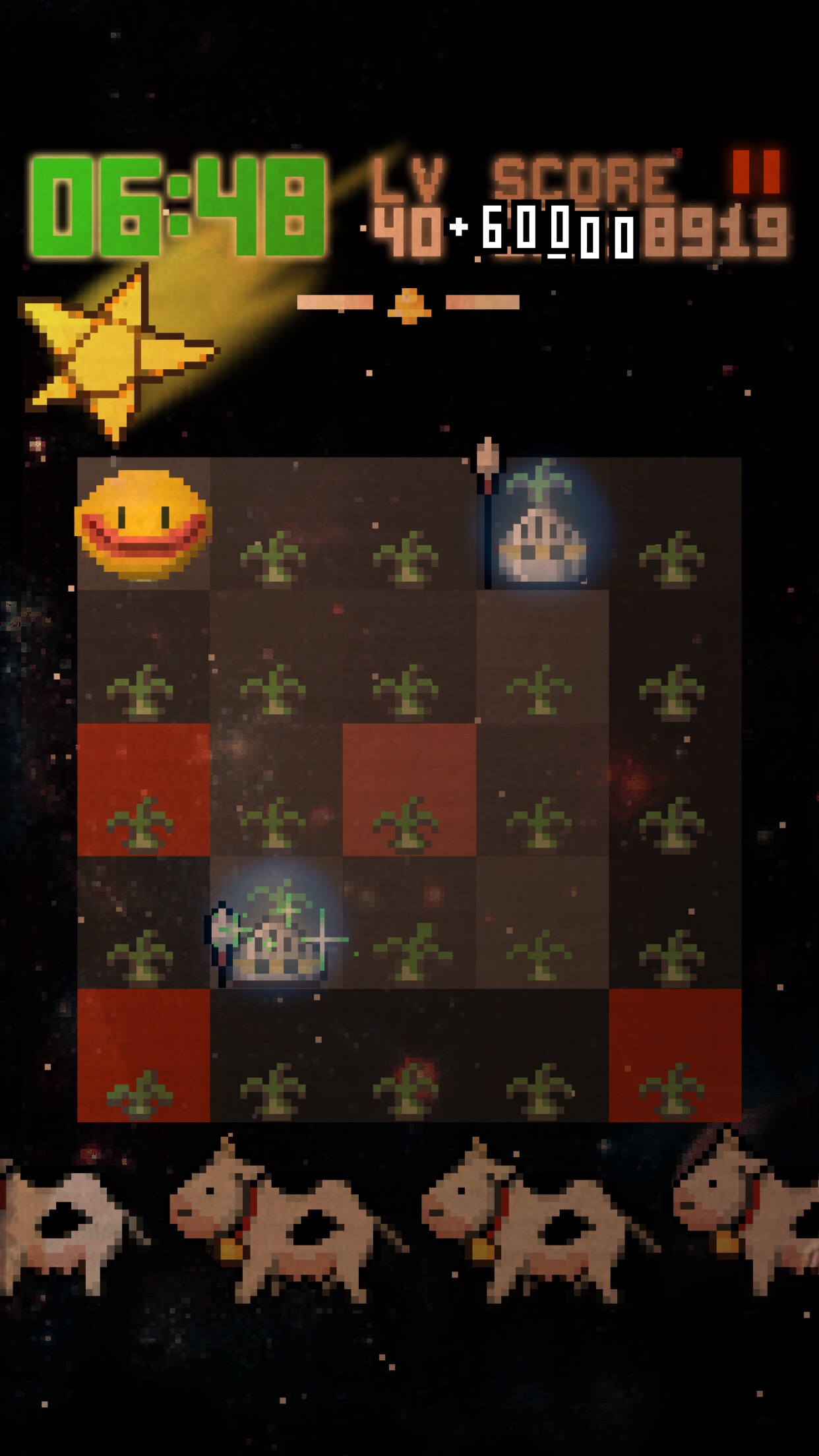 The story here is that in the distant future, there’s an island divided neatly down the middle into two countries. They have a very uneasy alliance, with war just one bad move away at all times. In the middle of the two countries sits a special hotel with an onion soup that’s famous far and wide. A VIP guest arrives to try to get his hands on the soup recipe, and things quickly start to get out of hand. Before the night is through, every guest of the hotel will have to learn the meaning of love and peace. If they survive, anyway. Got all that? It’s not really so important, particularly when you’re just starting the game. But it doesn’t hurt to know. 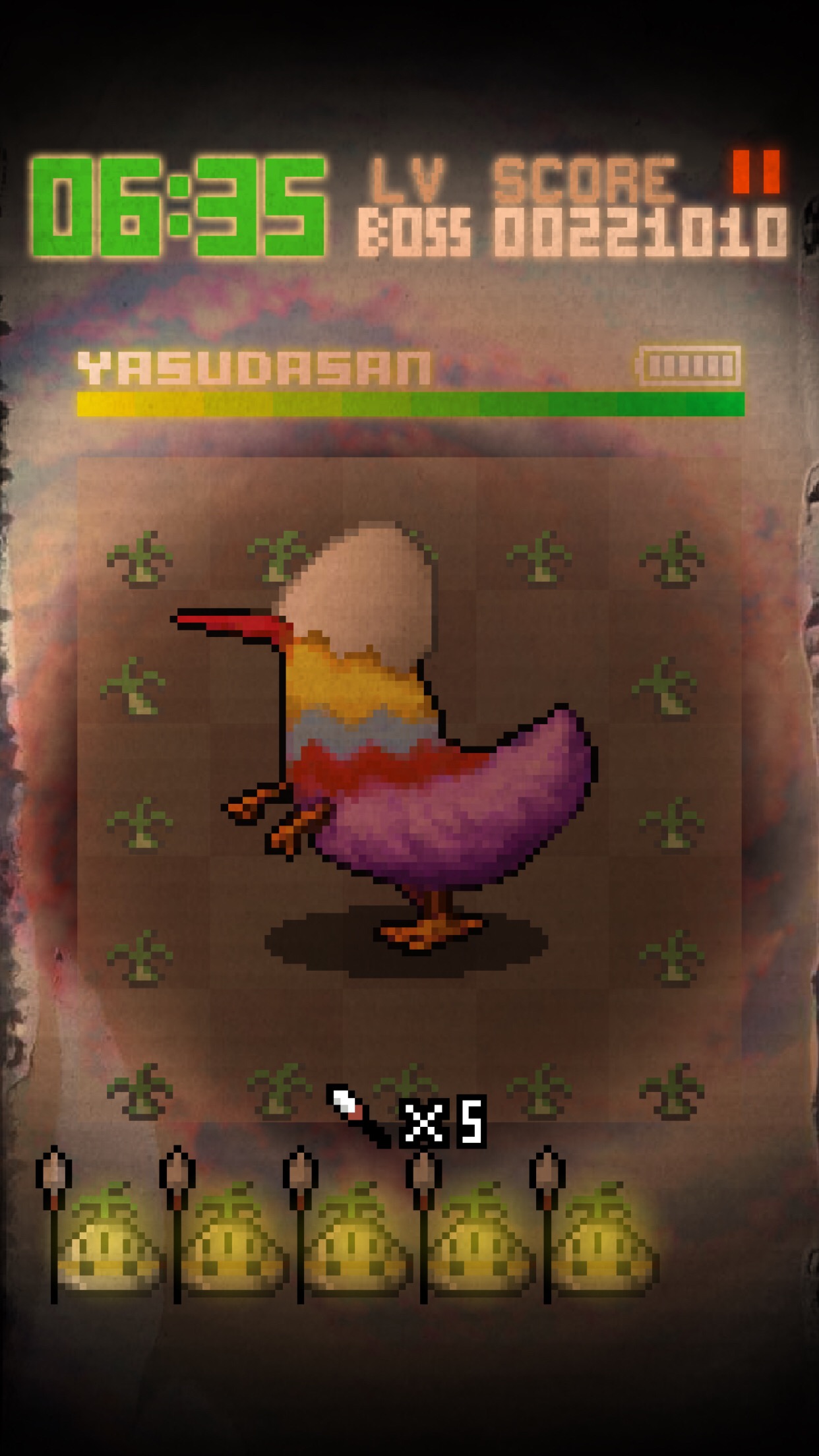 Million Onion Hotel is the brainchild of Yoshiro Kimura, best known to Western gamers for titles such as Little King’s Story and Dandy Dungeon. He has always marched to the beat of his own drum, and that’s certainly on display in this game. As he also did with Dandy Dungeon, Kimura has pulled together a lot of familiar elements to make something entirely unusual, wrapping it up in a bizarre yet compelling story that plays out in brief cut-scenes during the course of the game. While Dandy Dungeon was a bit of a long haul, however, Million Onion Hotel can be decidedly brief once you know what to do. It feels more arcade-inspired, even as the meta-game requires you to play multiple times to unlock a special ending.

Okay, but what do you actually do in this game? This is a fast-paced puzzle game where you’re presented with a five-by-five grid that represents the hotel. Various objects and creatures will make their way onto the grid, beginning with simple onions that spring up from the ground. While many objects vary in terms of how you need to interact with them, most of them can be removed by tapping on them once or twice. Once you do, the square underneath them will change color to red. Make five red squares in a row and you’ll be rewarded with a time extension, clearing the board and putting you to the job of doing it all over again. 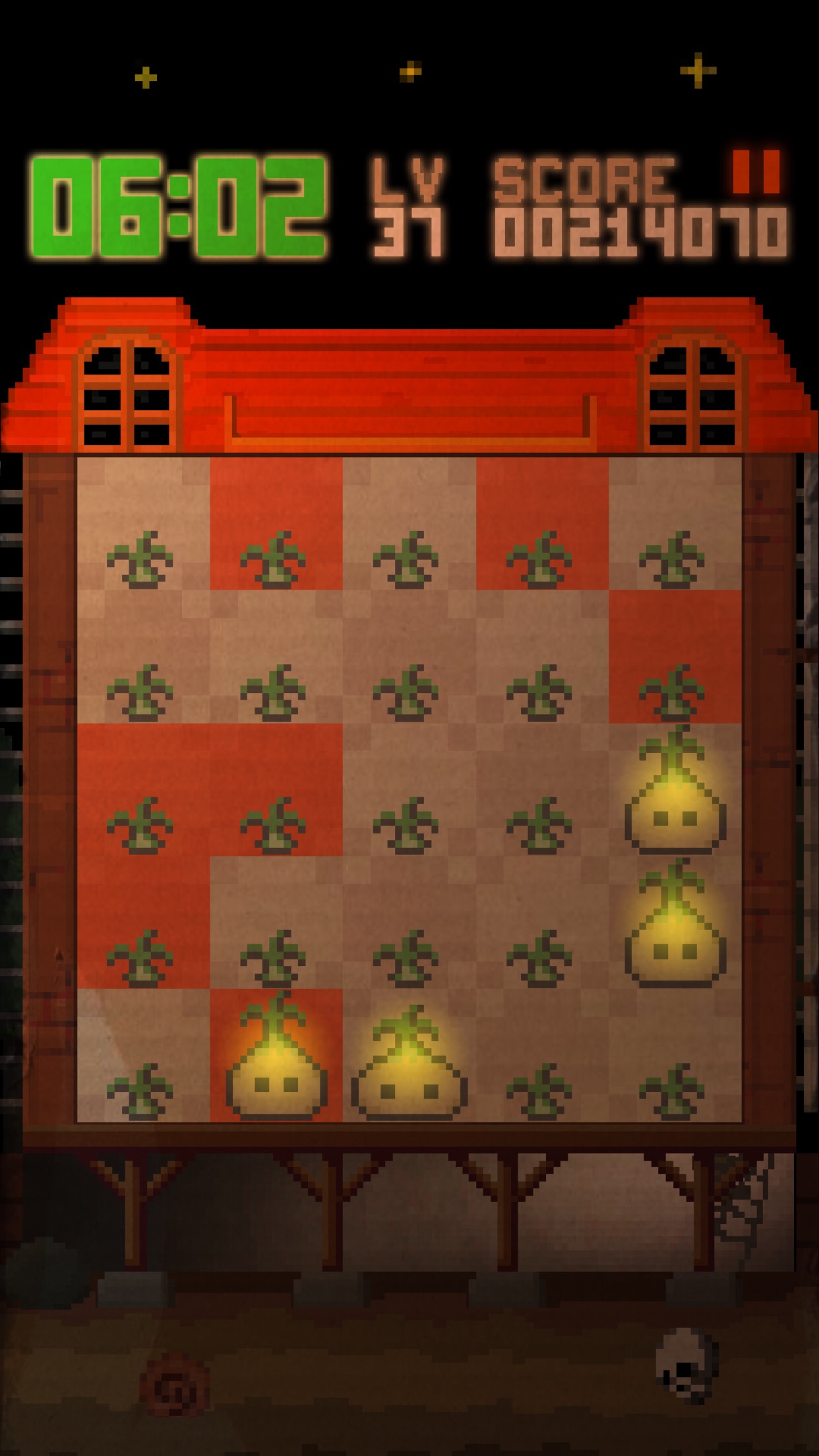 At certain intervals, you’ll run into boss fights where you need to collect and use knight onions to whittle down the boss’s life bar before they can run out your clock. The enemies get harder and appear more often the longer you go on, and more dangerous and direct threats to your timer will appear frequently. Run out of time, and that’s the ball game. Your score will be tallied and any cards you’ve unlocked will be awarded to you. The game ramps up so quickly and severely that you’ll likely be pawing at your screen like a maniac by the end of the session. And that would be your first mistake.

Like the titular hotel, there’s more to Million Onion Hotel than initially meets the eye. For example, the later bosses will seem nearly impossible to beat if you just walk into them cold. But what else can you do? You’ll probably notice the fruits and hearts that are tallied at the end of your game, but where do you get them? If you go into the sub-screen to read the cards you’ve earned, and you should because the translated notes are delightful, you can check out the requirements you need to satisfy to unlock the others. Wait, I can rescue people? I didn’t even see people! How does that work?

With its zippy pace, Million Onion Hotel pushes the player into sloppy play, but it also strongly hints that there’s something else you need to be doing. You’ll probably sort out the fruit thing easily enough by chance or by paying attention to the tutorial. Simply, if you can make more than one line at a time by tapping on an object, the background will shift and some fruits will appear. Keep following that train and you’ll soon realize that you can collect extra knight onions and rescue characters by making strategic matches, which results in a boosted score, more unlocked cards, and some stockpiled attacks to give you a leg up on the next boss you fight. It’s essential to learn this way of playing if you actually want to see all the game has to offer. 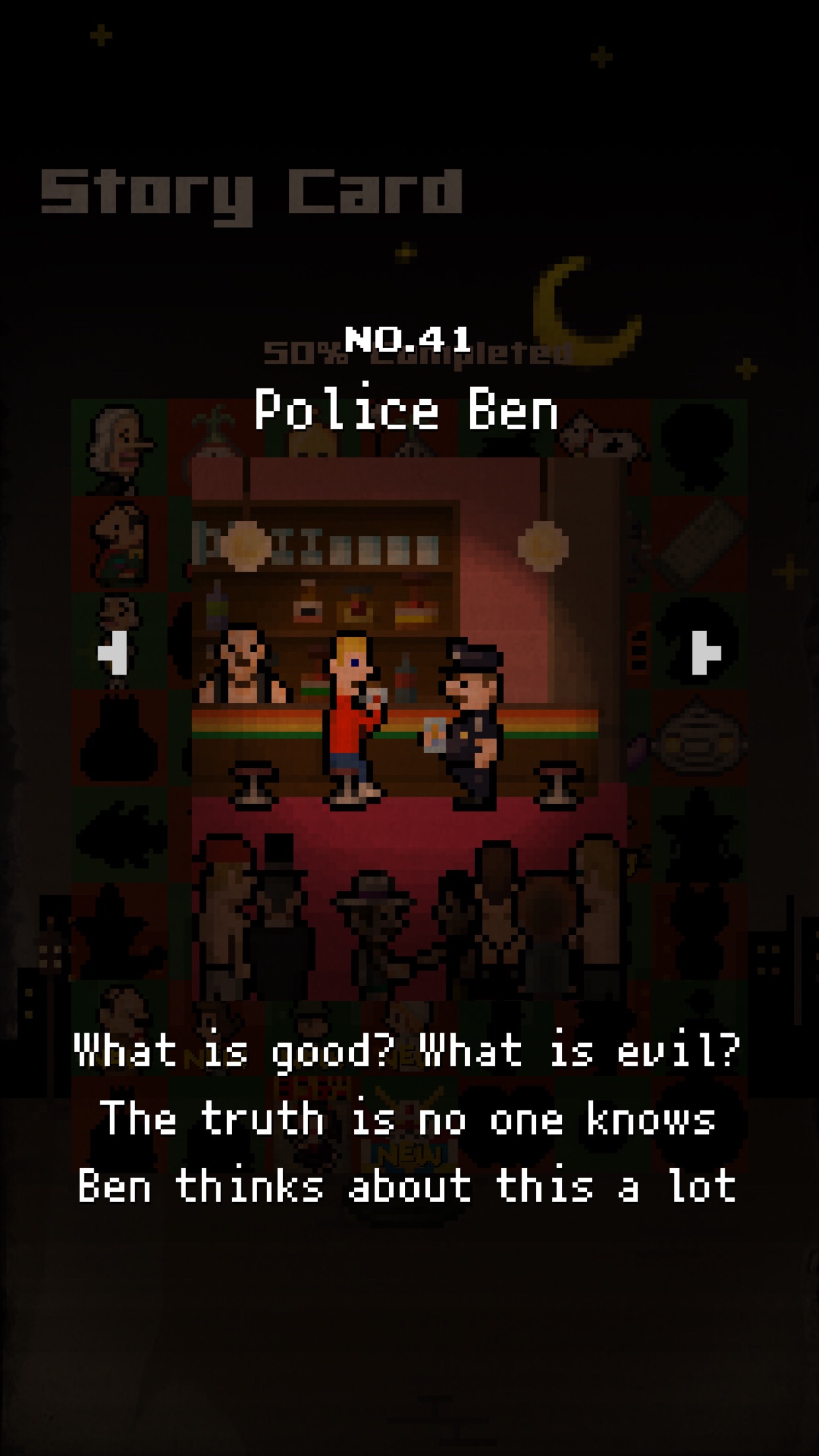 Your first serious goal after you’ve learned the ropes will likely be to survive long enough to see the whole story play out. After that, you can try to unlock all of the special cards, some of which have some tricky stipulations. Finally, when all else is finished, the game settles in nicely as an enjoyable score attack. Million Onion Hotel is frankly so frenetic that there’s always room to improve your score. I imagine many players will hit their own skill ceiling and, provided they’ve seen at least the main ending, call it a day there. In that sense, Million Onion Hotel isn’t quite as replayable as other puzzle games might be.

The game shines the brightest while it’s still showing you all of its tricks and oddities. The cut-scenes are bizarre and go in unexpected and sometimes inexplicable directions. The new enemies are often quite off-the-wall, and their accompanying sound effects and animations can be very amusing. Even the way the playfield evolves as you make your way through the story is neat, but can only surprise you once. Don’t get me wrong: there are secrets packed within secrets here, but the novelty of the game’s many quirks is at its most effective on that first playthrough. At some point it settles down from being a trippy experience into just being a cool game.

If you’ve got an appetite for unusual games, have good reflexes, and a keen ability to assess patterns quickly, Million Onion Hotel was made just for you. If you don’t? Well, you’ll probably have a good time with it anyway. It can be really confusing at times, but usually in a good way. As iOS gamers, we’re fortunate enough to have a wealth of stylish puzzle games with personality to burn, but I can promise you that none of them are as adorably eccentric as this onion-plucking pleasure cruise.