Let’s get some extra information out of the way immediately. As mentioned, this is not a sequel to the game known as Final Fantasy Dimensions in either story or mechanics. I mean, Square gave it the title so it is a sequel, and it’s absolutely drenched in Final Fantasy references just like that game was, but you know what I mean. It’s also important to note that unlike Final Fantasy Dimensions, this is not a standard JRPG. Square Enix has been very thorough about removing the free-to-play systems from the game, but its basic structure is still that of a social RPG. You don’t have to worry about stamina meters, premium currency, or random gatcha pulls, but you’re also not going to be exploring caves or overworld fields. You pick a location, a story scene plays out, and you fight a series of battles. Between those sets of battles, you can tinker around with your party’s set-up, visit shops, and talk to NPCs, but it’s all done through a menu. If you come here expecting a normal Final Fantasy game, you’re going to be very, very disappointed. 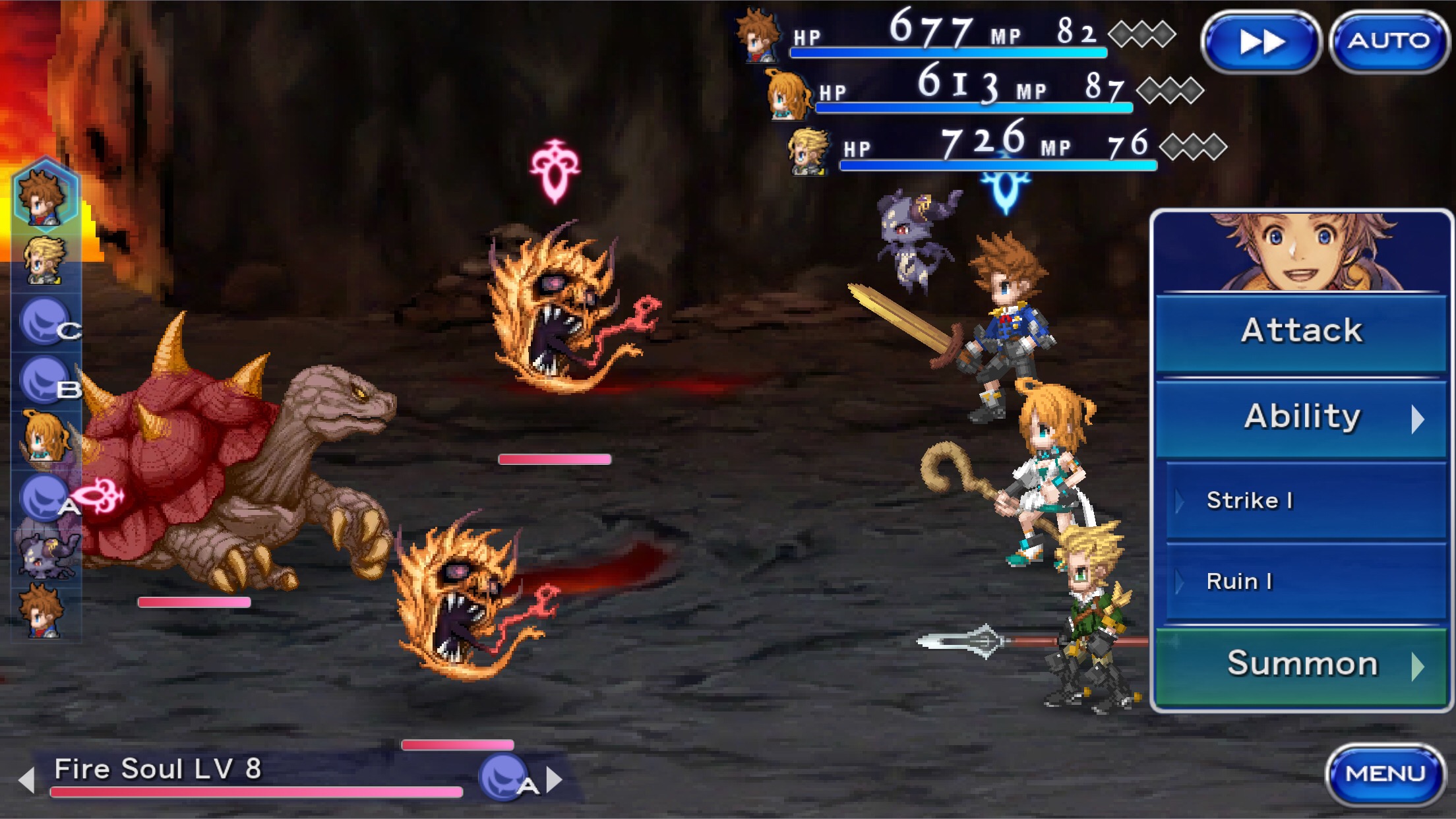 Apart from that, though, it’s actually not that bad of a game. It’s a little on the easy side the way pretty much every Final Fantasy game has been since Final Fantasy 6 was released, the story spends a lot of time going nowhere, and it’s probably too simplified and repetitive for its own good, but if you play it in short sessions the way it was originally designed, it’s a nice way to pass the time without commanding too much of your attention. One of the biggest changes to the game from its free-to-play form is in how your characters develop. With a deliberate hand guiding when and where you get new abilities and rank-up materials, the overall curve feels much smoother. Almost every sub-quest will earn you either a new ability or the material to rank up one of your existing ones, and progressing through the game opens up special quests that give you added stat bonuses and abilities while filling out the story.

The story sees an energetic kid named Morrow who wants to be a hero teaming up with a mysterious girl named Aemo and a heroic warrior named Wrieg. Circumstances throw them together on an adventure through time and space. That sounds more like a Kemco RPG than a Square Enix game, and the resulting story honestly isn’t too far off that mark in terms of its quality, albeit with non-stop references to classic Final Fantasy games. Well, it’s not as though the first Dimensions game had a story worth caring much about either, I suppose. It’s a good excuse to send our hapless heroes all over the place, and that’s probably all that’s important here. They’ll meet some other friends along the way, but nobody ever really gets out from under their character trope in any meaningful way. 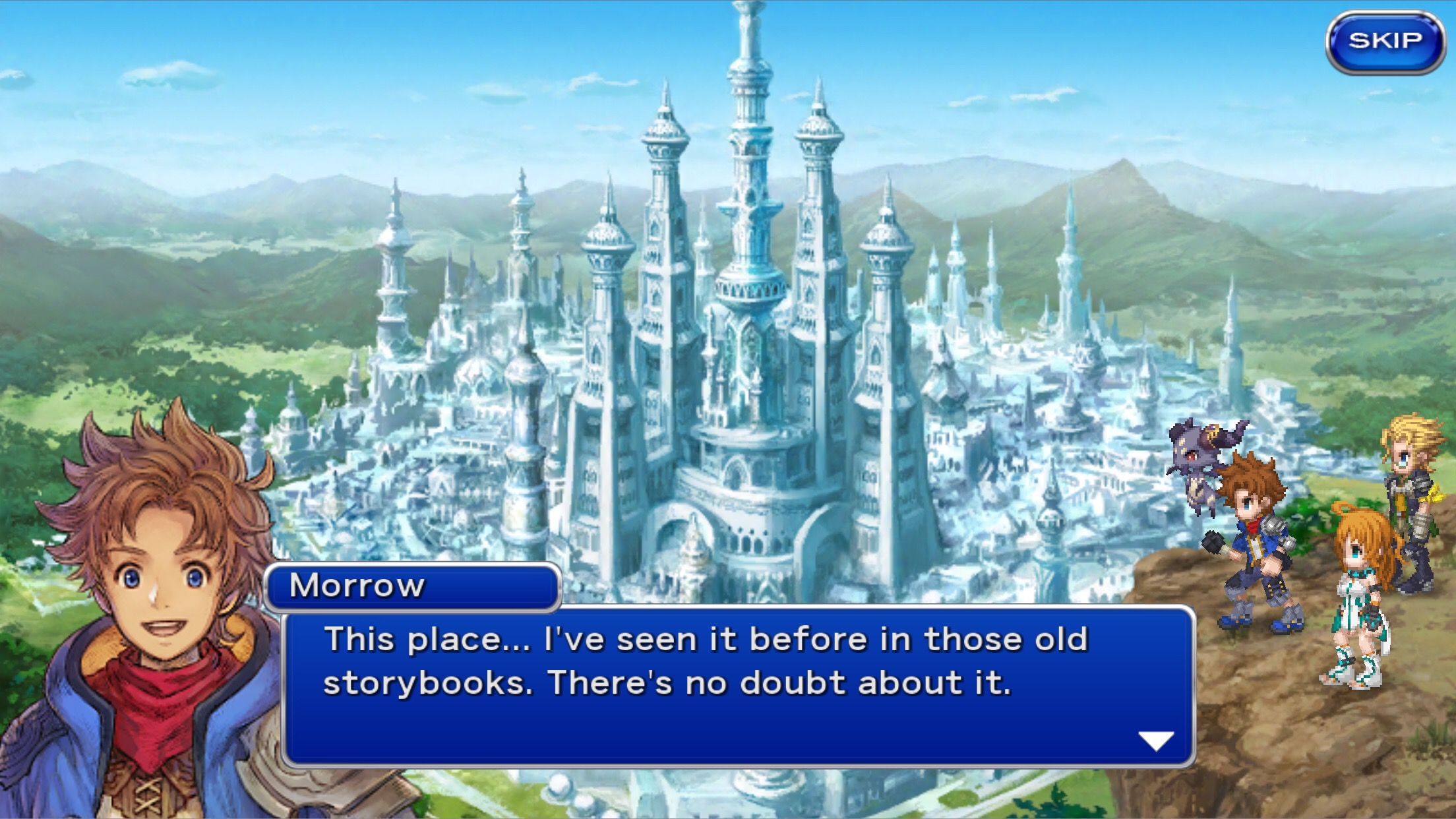 The basic flow of the game has you going from location to location using a set of overworld maps. At any given point, there will be a highlighted location that will forward the main story, and any number of locations where subquests can be tackled. Tapping the location will show a list of missions you can take on there, along with the recommended level for beating them. If it’s a town, you’ll be brought to the town menu. Even if there aren’t any specific missions available at a location, you can still run a series of battles there if you want, which means you can grind to your heart’s content. Selecting any mission will either bring you to a story scene or to a set of battles. Generally speaking, the main missions require only that you clear the battles. Subquests may require you to kill a certain number of enemies or collect a set amount of items, tasks which can require multiple run-throughs of the mission in question.

Battles are strict turn-based affairs. When each character’s turn comes up, you can choose to attack, make use of one of their abilities, or summon one of their equipped Eidolons. You can’t just whip out your summons on the first turn, however. You’ll need to build up a meter to use them, and the more powerful they are, the longer you’ll typically need to wait. Your HP and MP are restored at the end of each series of battles, so they’re all or nothing affairs. It’s nice because you can feel free to let loose with whatever skills you want, within reason. Most of the battles are fairly relaxed, but some of the bosses can give you trouble if you don’t try to take advantage of their weaknesses by using the right Eidolon signets and abilities. 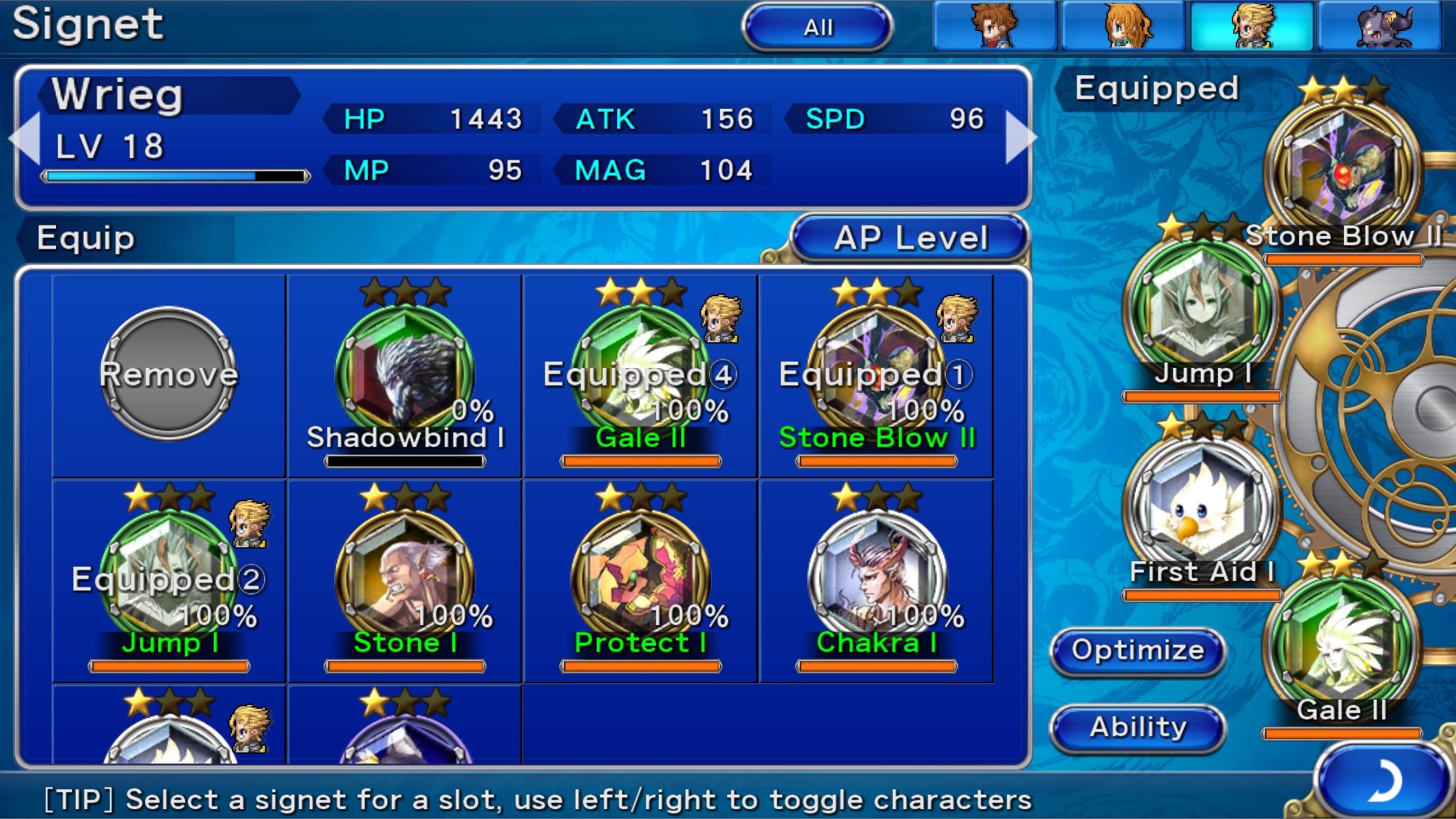 Those Eidolon signets end up being the most interesting part of Final Fantasy Dimensions 2. Each one can only be equipped by particular members of the party. As you battle, you’ll earn AP that goes towards leveling up the signets. When you’ve earned enough, that character will permanently learn the ability that signet conveys. Signets also give your characters bonuses to their stats, so you’ll have to weigh those gains against the usefulness of the respective abilities and summons of each. Signets can only gain one level at a time. You’ll have to evolve them to learn further abilities and improve their strength. This process has been simplified to merely requiring one particular item that can be won by clearing certain missions, purchased in certain shops, or as a prize from clearing the optional Tower of Babil map enough times.

You’ll constantly be learning new abilities and shuffling newly earned or evolved Eidolon signets around, and it’s quite a bit of fun to collect them. While signets are restricted to their own respective party members, your sidekick Mootie can equip any of them, making him a powerful support character. Some of the more challenging subquests offer strong signets in return, giving incentive to go after them even before you’re level-appropriate. Basically, the longer you play the game, the more strategic options open up to you, and the more motivation you’ll have to actually make use of those options. It’s a pretty solid hook in a game that otherwise often feels threadbare in a lot of ways. 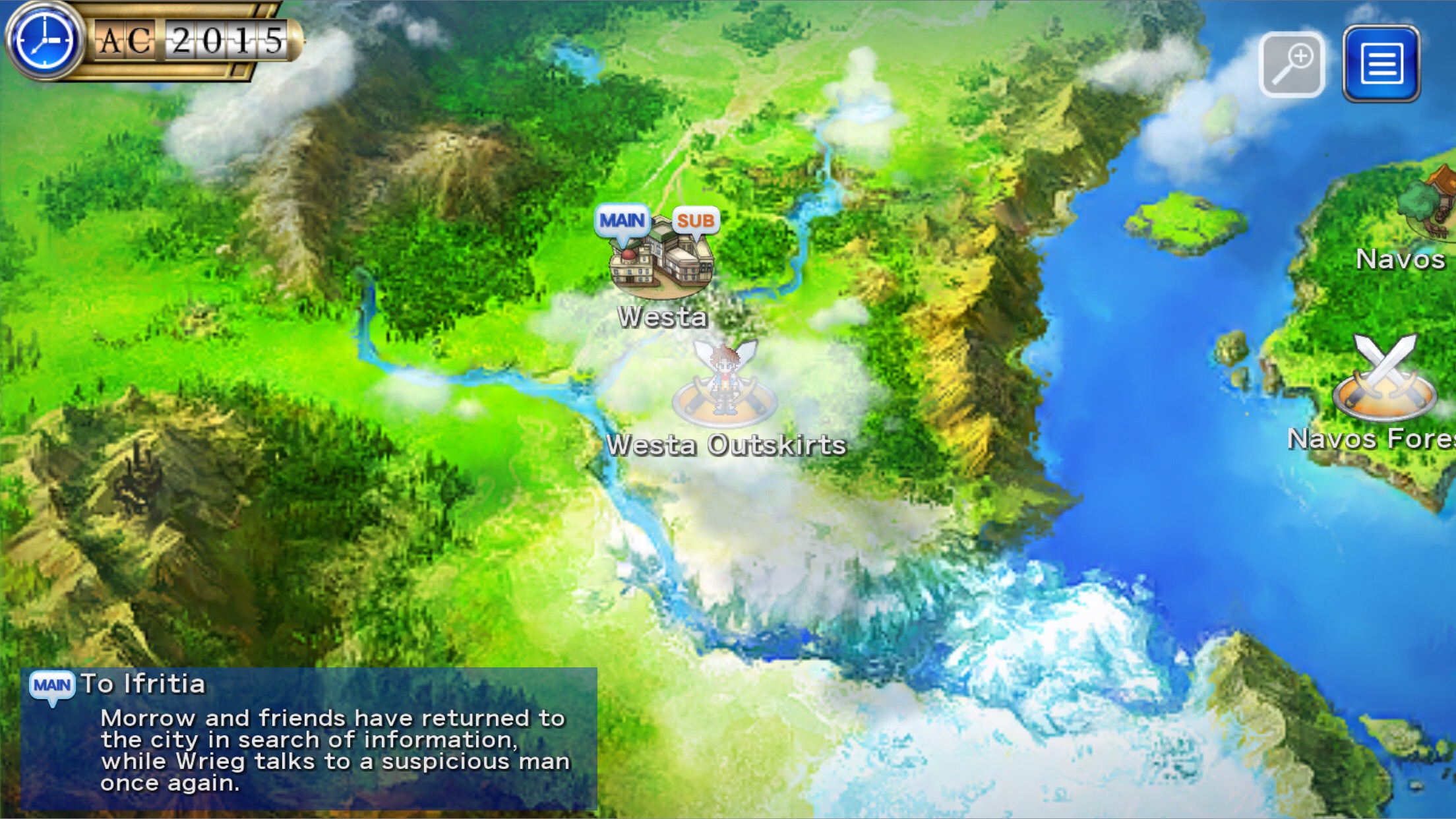 When I say threadbare, however, I’m not referring to the length. Final Fantasy Dimensions 2 is a far longer game than you might initially anticipate it being. Even without any dungeon exploration it’s nearly as long as the average Final Fantasy game when all is said and done. It lays out almost all of its cards early on, though, so pulling yourself through all of that can be a bit tiring. Again, I have to stress that the skeleton of this game was designed around its original free-to-play form where stamina meters would have kept you from shotgunning it the way you can in its current form. I’m sure some people will get a kick out of longer sessions with it, but I found I’d had my fill of its gameplay after about a half hour of continuous play at most. You’ll want to digest this one slowly across a number of gameplay sessions lest the grind get to you.

I also really want to emphasize that Square Enix didn’t just make minor cuts to bring the game from free-to-play to a premium title. While you can tell they didn’t add a lot content-wise, it’s remarkable just how much they cut or altered to keep the game from feeling like a free-to-play game. It’s not going to mean much if you haven’t played the game in its original form, but I think they did a fair job of making it something worth paying money for upfront. The biggest case against it is the presence of better, more fully fleshed-out RPGs from Square Enix around the same price point, I suppose. Well, at least it’s better than The After Years. 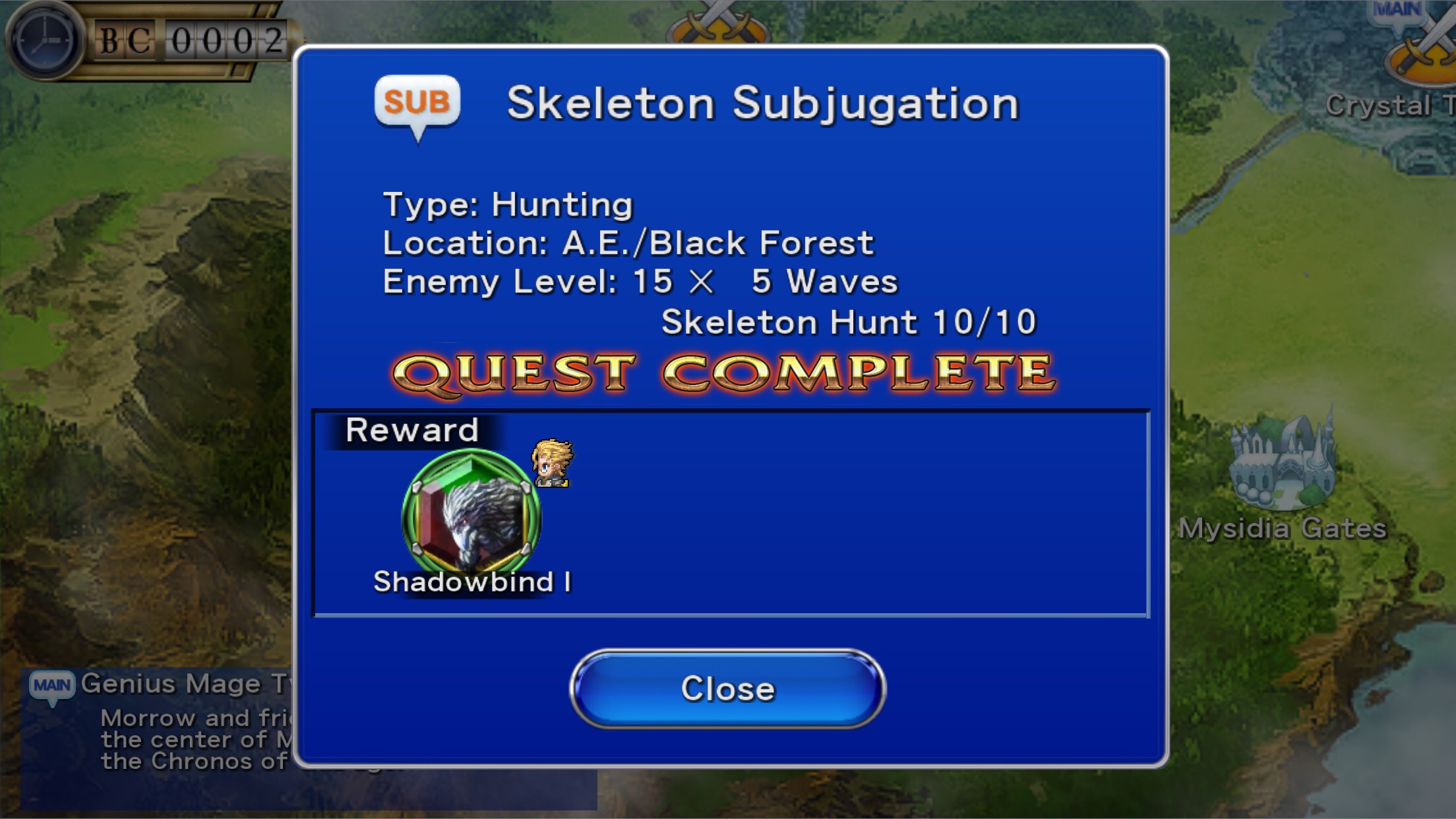 If you approach Final Fantasy Dimensions 2 with the appropriate expectations, I think you’ll find it a reasonably enjoyable game. It’s a little too watered down for me to give it too emphatic a recommendation, particularly given the price bracket it’s sitting in. At the same time, however, I can’t say I didn’t have a lot of fun with it, nor can I say that it didn’t offer a sufficient amount of content for the price. This isn’t a normal RPG by any stretch, but that might make it more appealing to some who are tired of the usual fare. If nothing else, it’s absolutely fascinating to see a game that was very much free-to-play from top to bottom in its original incarnation become a decent offline one-and-done paid title.