We’ve seen quite the stream of iOS games getting updated for iOS 11 and its new 64-bit requirement. While we’ve likely seen the bulk of said updates by now, you can probably count on a few stragglers appearing here and there. One of today’s examples is an old favorite of mine, Dragon Fantasy ($7.99). An entertaining throwback to 8-bit console RPGs, Dragon Fantasy first launched on iOS back in 2011 before making its way in ever-improved forms to a number of other platforms including PlayStation Vita, Nintendo 3DS, Android, and PC. Its most recent update prior to this one was back in 2013, so there was plenty for the iOS version of the game to catch up on. 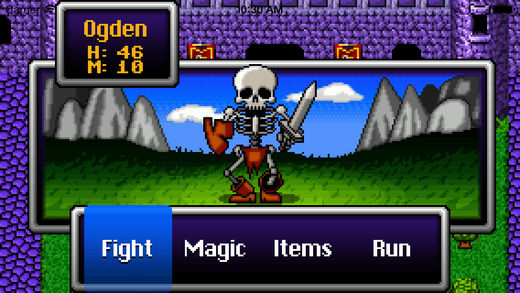 The most important addition, of course, is that of 64-bit compatibility, allowing the game to run on iOS 11 and beyond. While the developer was doing that, he decided to add in a number of features including iCloud support, a faux-dual screen portrait mode, and support for larger iPhone screen sizes. Basically, anything that could be added from the last two years’ worth of Dragon Fantasy releases on other platforms has been put into this update. Unless you’ve really got a thing for stereoscopic 3D and/or button controls, the iOS version is for now the best version of the game, in other words.

I’m just happy to see games like Dragon Fantasy living to see yet another year, but when those updates come with extra goodies like this one, it’s even better. I’m especially excited about the portrait mode option, as I feel like turn-based RPGs play really well one-handed. Ideally more games would support both orientations the way Dragon Fantasy now does. I’m also glad to see iCloud support added in, as that’s another feature I think RPGs and other lengthy games should pack in by default. All in all, this is pretty good news for fans of iOS RPGs. Let’s hope to see more pleasant surprises as time goes on.