The App Store has come a tremendously long way since its humble beginnings in 2008. It was the first time that Apple had officially introduced the distribution of third-party applications on its platform. It was an exciting time and many developers were taking their first steps in exploring the possibilities of gaming on iOS devices. I can recall numerous games from this time that had extremely simple mechanics, yet their simplicity was their greatest strength. Since then, the App Store has continued to acquire an insane amount of games, especially in the physics puzzler genre. Physics puzzle games may have gradually become more complicated overtime, but Tales of the Tiny Planet ($3.99) hearkens back to the aforementioned era of physics puzzle games that were purely simple and fun. 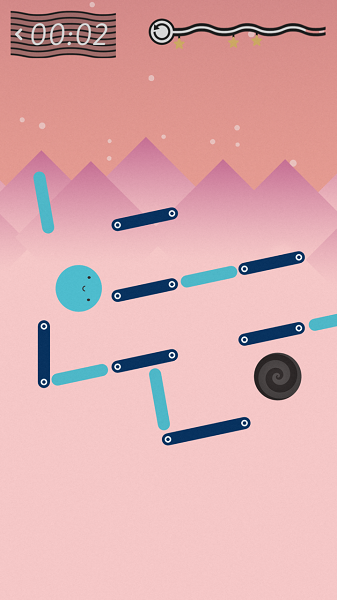 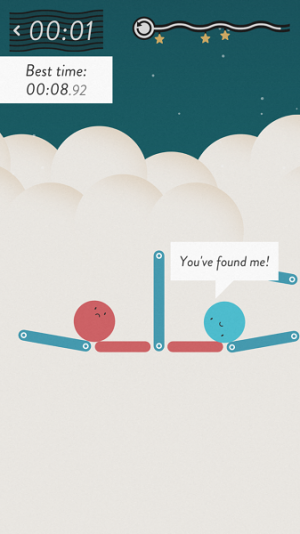 Tales of the Tiny Planet provides you with the opportunity to help various planets find their way home through various puzzle levels that span over 5 different worlds that contain 60 levels in total. The art style of the game looks like it was ripped straight from a colorful children’s storybook while heavily reminding me of the adorable aesthetics of Loco Roco. I appreciated that planets occasionally gave me small messages of encouragement when I had to restart a level. The game’s music fit its cute theme well and I also enjoyed listening to the smile-inducing gibberish of planets as they communicated with you. All in all, this game’s presentation was fantastic.

As mentioned before, Tales of the Tiny Planet’s gameplay is extremely simple. Each level consists of you guiding a planet to the end of a level by avoiding dangerous obstacles through manipulating various types of platforms, including rotating platforms, bouncy platforms, and moving platforms. You maneuver these platforms all at once by tapping and holding down your finger on the screen for various amounts of time. Once you complete a level, you are given a 1-3-star rating according to how long it took you to finish it. 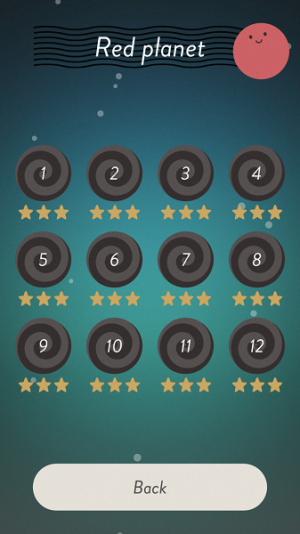 Occasionally, Tales of the Tiny Planet throws in a few new aspects to certain levels, such as giving you the task of guiding two different planets (at the same time) to the end of a level. New aspects like this helped keep the simple gameplay formula interesting and fresh. I appreciated how I had to approach these types of levels in a different manner, despite the game’s control-scheme and gameplay mechanics never changing.

I must congratulate Pixelsplit on the game’s fantastic level designs. I was continuously impressed and surprised by how cleverly different each level was. Tales of the Tiny Planet’s level designs slowly build new combinations of platforms on top of one another in order to introduce new ways you can affect the physics of each planet. None of the levels (that are currently available) felt unfair or impossible to finish, despite some of them being quite difficult to obtain a 3-star score upon their completion.

Luckily, the physics of each planet traveling/reacting to different objects felt realistic and believable. The slightest change in the timing of your screen-presses could affect your end time/score. I found myself discovering new ways that I could shave time off of my previous run, regardless of how flawless I thought it was. It’s important to note that there are many achievements to shoot for, as well as a list of rankings for you to compete with other players.

Lastly, the game respects your time. You can finish a level in a few seconds, depending on whether you successfully make it to the end. It’s the perfect definition of a mobile game that can be experienced in short bursts without having to worry about time constraints. I can easily see many people playing this between classes, during short breaks, or while sitting on a porcelain throne. This aspect is definitely one of the game’s strengths.

At the end of it all, I really enjoyed how refreshingly simple Tales of the Tiny Planet was. This is due to the fact that I occasionally find myself in the mood to play a game that helps me relax while keeping things simple. I know that others may crave this same type of game (from time to time) too. It’s a solid choice in a genre with a convoluted catalog of games. Feel free to check it out and don’t forget to visit the game’s forum for more impressions of the game or feel free to leave impressions of your own!