You’ve probably read headlines, and maybe even entire articles, about Darkest Dungeon ($4.99). There’s been plenty of them. The game was officially released on Steam in early 2016 and has garnered all kinds of praise and game-of-the-year accolades. It also has a reputation for dishing out one heck of a beating to victory-seeking players. For every “this game is great" comment there seemed to be a couple “this game is impossible" disclaimers. Darkest Dungeon has built up quite the reputation for both excellence and challenge and those of us in the mobile crowd finally got our first crack at it with the recent release to iPad. Does Darkest Dungeon live up to the hype? Short answer: definitely, go buy it. For the long answer, read on.

Darkest Dungeon is a role-playing game with roguelike elements, mainly permanent death and a trip to the graveyard for characters die, and a great deal of town management to boot. The game starts as you inherit a spooky, gothic-style hamlet. Sadly, the estate has seen better and brighter days. An insane ancestor’s quest for unholy power has unleashed some nasty stuff in the area and you’ve got some heavy-duty cleanup to do in order to restore the land to some sense of normalcy. Luckily, there’s no need to do the heavy lifting yourself as there’s no shortage of heroic or greedy types willing to take on unknown evils in the name of good or gold. 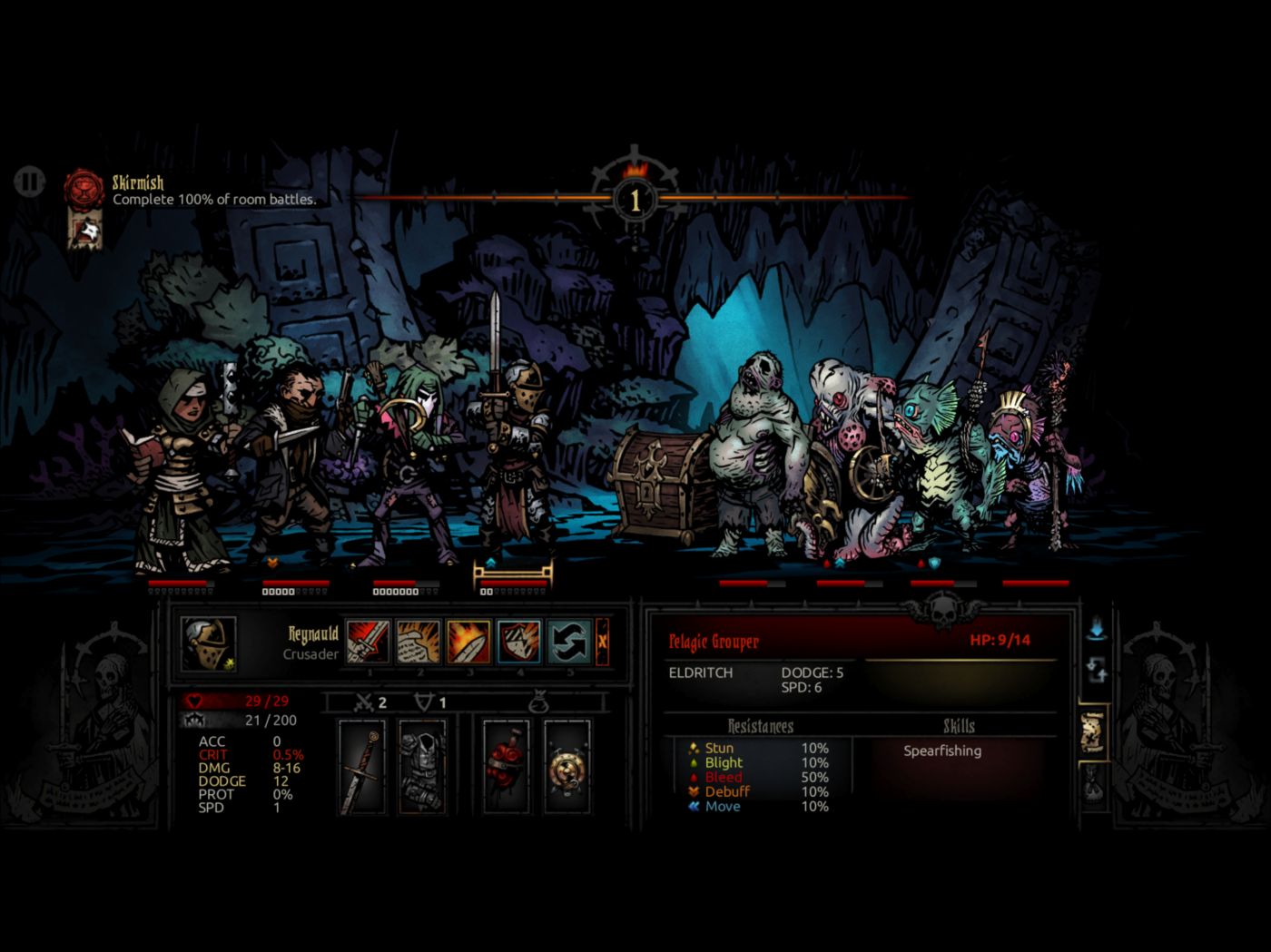 You need simply organize these hearty folk into effective bands of four and send them out on quests to seek out and eradicate the evil that plagues your land. Hiring adventurers to do the heavy labor isn’t so hard. Keeping them alive, sane, and fit to keep working is another story. Heading out into the wicked world of Darkest Dungeon takes its toll on even the strongest body and fittest mind. Stress and sanity are factors and, in fact, a resource in Darkest Dungeon. Trigger a trap of spikey death and your stress level goes up. Get groped by Cthulu-like tentacles and your stress level goes up. Watch an ally, a member of your party, go all furry and wolf-like and your stress level goes up. Hit a full bar of stress and a character becomes afflicted with some short-term condition like paranoia. If an adventurer is subjected to a double bar of stress they keel over on the spot of a heart attack with a one-way trip to your hamlet’s graveyard. This stress mechanic is a clever way to force creative team building as you can’t lean on a super-powered foursome to win your way through.

Luckily, there’s always plenty of cannon fodder, I mean, employees, thanks to the stage coach. The stage coach delivers a near endless supply of new characters you can work into the mix. Upgrading your camp allows you to maintain a nice stable of mercenaries to rotate through missions—time off lowers stress—and to replace those that die on the job. Oh, and there will be deaths, plenty of deaths…in fact, don’t get too attached to any particular character. Darkest Dungeon is unforgiving as can be and punishes mistakes rather brutally. There are a lot of critical decisions to make: the enemy you choose to stun or ally you choose to heal in a given turn can be the difference between a close victory and a party wipe. Do you unload with a big attack on a healthier enemy or take down the bleeding foe to make certain it doesn’t get another turn? Choose poorly and it’s back to the stage coach for replacements.

Darkest Dungeon’s reputation for being a devil of a game is well deserved as it brings the challenge. There are three different difficulty modes: Radiant, Darkest, and Stygian. The middle mode, Darkest, is the default experience and can be frustratingly difficult. Thus the aforementioned and well-deserved reputation. Stygian is even more difficult and is, as far as I can tell, meant for people who don’t much care for themselves and want a creative form of self-punishment. Radiant, however, is meant for those who don’t want quite so impossible, or long, of a game. It doesn’t sign you up for a particularly bad beating, certainly not beyond the pale of what one would expect in a challenging roguelike or RPG. If you are a little intimidated or turned off by super difficult games, I highly recommend still checking out Darkest Dungeon in Radiant mode.

Difficulty aside, Darkest Dungeon is a game that absolutely drips with gothic and heavily Lovecraftian flavor. The visuals are dark and attractive and would fit right into a graphic novel. There’s also a fantastic narrator who both sets the scene and sells the theme. The voice actor is spot on for a Lovecraft meets Deadwood kind of vibe. We’re talking a Bastion level contribution here, not some simple voiceover work, and it is well worth playing with the volume up to immerse yourself in the scene. 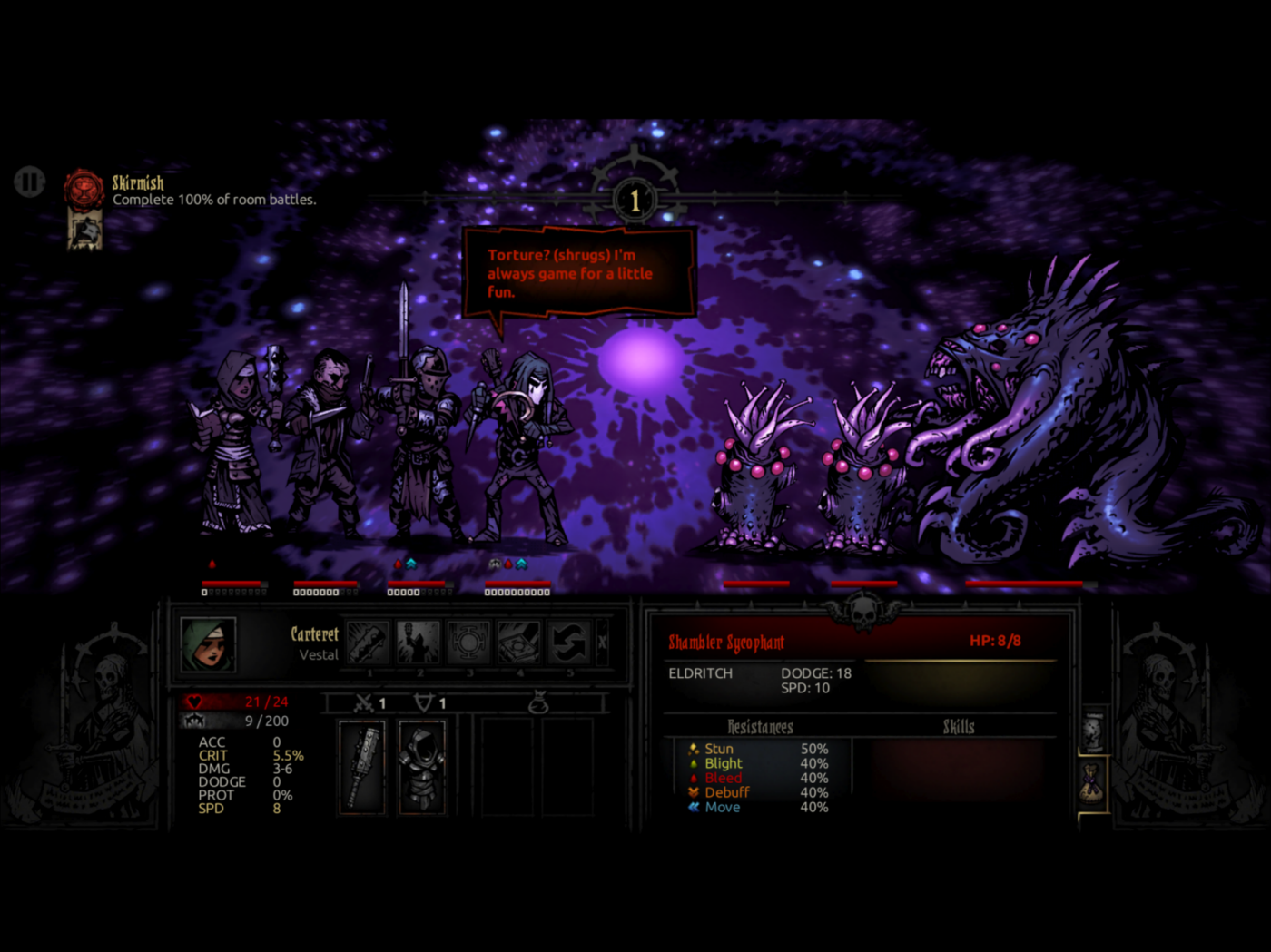 It’s not all upside, however, as the game was ported to iPad with the 16:9 aspect ratio intact. This means there are big black bars across the top and bottom of the screen. The text is also small and can be hard to easily read as a result. For some, these will be minor inconveniences or things you don’t even notice. For others they could be a deal breaker so I think it is worth pointing out. I find it a bit annoying, but the game’s scale didn’t detract from my experience too terribly much. There also some clunky UI elements to be aware of, the need to tap a tiny arrow to scroll up and down your victim…er, adventurer’s list chief among them. If you try to swipe to scroll you just drag one of the fodder to a new place in the list. I continually do this even still. This was a bigger problem from my perspective and I hope it gets fixed in an update.

None of these complaints derail me from one underlying fact: Darkest Dungeon is a superb game and is well suited for the iPad. It’s the kind of game you can drop almost any amount of time into and have fun. I’ve played both quick, twenty-minute spurts to tackle a single quest as well as some hours-long play sessions where I settled into the couch to really dig in and make some progress. Combat is fun and challenging and rewards good planning—picking the right mix of characters to go in—as well as good turn-by-turn decision making. The ability to upgrade and improve your town as you go adds a nice sense of permanence to what is otherwise a constantly shifting mix of characters. The bottom line is that if you enjoy role-playing games centered on smart, tactical combat Darkest Dungeon is a must-buy.