Everyone knows I love cats, and everyone (probably) knows how much I love platformers. And birds are pretty cool too. So it should be no surprise to see that Ryan Carag’s Cat Bird (Free) has managed to woo me into landing itself a Game of the Week recommendation. Ok, so pixel art “throwback" platformers are done to death nowadays, and it can be hard to stomach yet another one even if it’s a genre you enjoy. That said, while Cat Bird doesn’t necessarily break any new ground, it’s rare amongst the flood of retro-style platformers to see one so well-realized with a fantastic control scheme and truly well-designed levels. 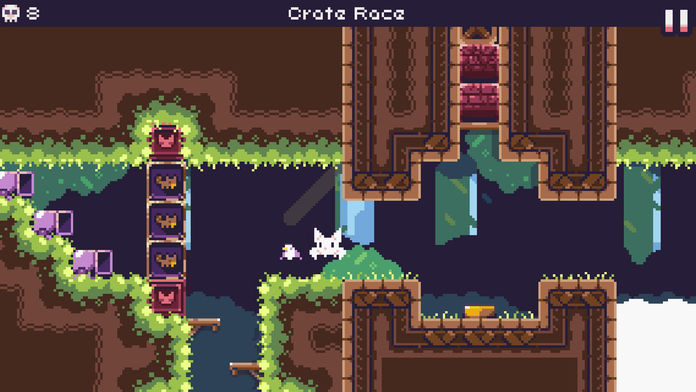 You play as the titular Cat Bird which is a hybrid of both cat and bird, but looks more like a white bat. Hey, maybe that’s the joke, that bats are actually cats with wings? I always thought of bats as rats with wings, but that also describes New York City pigeons. There’s a deep, philosophical debate that needs to happen about all this, but for now all you need to know is that being a Cat Bird means you can run, jump, and float by flapping your furry(?) wings. If you remember the old Ghosts ‘n Goblins spinoff for the Game Boy called Gargoyle’s Quest, or its sequels Gargoyle’s Quest 2 and Demon’s Crest, then this game feels like an homage to that floating style of gameplay.

One of the game’s biggest strengths is its simple set of moves–run, jump, float–as it’s simply a means to negotiate your way through more than 40 levels of extremely well-designed puzzle platforming. Rather than having your actual move set become more complex, the game throws increasingly complex challenges your way, oftentimes requiring the use of your unique floating ability in order to suss them out. It’s a one hit and you’re dead kind of game, but rather than having an allotment of lives Cat Bird actually counts your number of deaths instead. This opens up the bonus challenge of trying to go back and complete levels without dying, and coupled with a Time Trial mode and hidden Crowns to collect that are spread throughout many levels, there’s a lot of replay value once you’ve made your way through the game the first time.

All of this is of course wrapped up in a very adorable package. Your Cat Bird itself is extremely cute, in a slightly creepy kind of way… but still cute! Let’s just say I’d rather not run into that abomination of nature in real life anytime soon, but in pixel form it’s quite adorbs. The environments are detailed and full of life with little creatures fluttering about, and the music is boppy and upbeat which fits the game well. I seemingly can’t get enough of platforming games, but with so many on the market it takes more than even a “very good" one to hold my attention. Cat Bird is beyond very good, it’s excellent in fact, and although it’s not changing the face of retro platformers as we know them you’d be hard-pressed to find such a lovingly crafted and challenging one for the price of free with the option to pay $1.99 to remove ads and make it a fully premium experience.