What comes to your mind when you hear the word “pigeon"? I don’t know about you but I have always been told that they are “the rats of the sky". They can’t be that bad, can they? Pigeons used to be pretty useful by delivering written messages back in the day. That fact has to make them a bit better than rats. Honestly, that’s the only positive thing about pigeons that I can conjure up from my mind. Anyways, all of these thoughts flew through my brain as soon as I read the title of Pigeon Wings ($1.99) by Ignacio Schiefelbein.

Pigeon Wings is a mixture of both a side-scrolling racing game and a shoot ’em up. Throughout the game you play as a pigeon named Pigeon. Yes, you read that correctly the first time. Pigeon is faced with the daunting task of saving East Megalopolis from an aeronautics titan named Duke Dexter and his deadly pilot XO-9999. Luckily, Pigeon is not completely alone in his endeavor. He also has General Exposition in his corner to guide him through stopping Duke Dexter and his dastardly plans. As you can tell, the plot is pretty goofy and light-hearted. It definitely made me smile quite a bit. 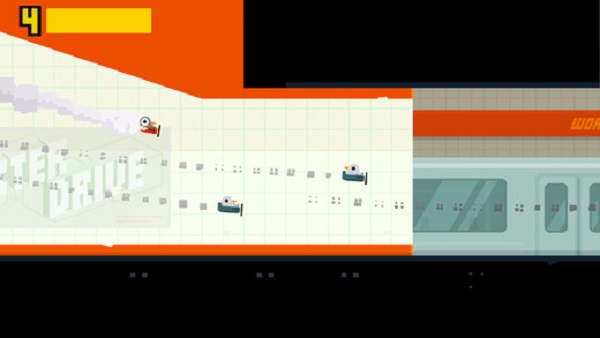 There are currently 50 levels (throughout an overworld map) for you to complete in Pigeon Wings. Some of these levels consist of short, fast-paced races where you must fly your plane to the end of a level as quickly as possible. Your path usually has a few ups and downs, as well as other obstructions that try to intercept you on your journey. There are also other pigeons, like you, who are trying to reach the finish line.

Once you reach the end of a level, it records your time and what place you finished in. You are rewarded 1-3 medals according to how well you did. You can compare your time to other people who are also playing the game as well. This lead me to try levels over and over again in order to perfect my personal time, even after dying so many times from the pure difficulty of them. I really enjoyed the replay value this aspect added to the game.

Other levels pit you against Pilot XO-9999. These encounters change the gameplay into the style of a shoot ’em up where you have to dodge multiple projectiles on-screen, as well as fire your own projectiles back. I welcomed these “boss fight" levels because they really changed up the formula and staved off any monotony that may have ensued otherwise. It’s important to note that your completion times are recorded on these types of levels too.

You can access a plane hangar at anytime while you are on the overworld map. This is where you will spend the medals you obtain from levels on upgrades for your plane, such as new engines, better boosts, and better handling. I appreciated how this added incentive for me to obtain as many medals as possible in order to trick-out my plane and improve its overall performance. 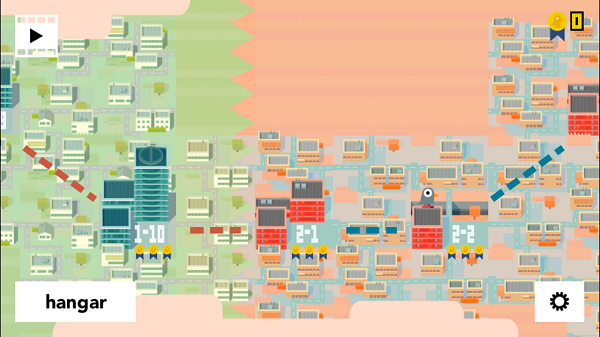 However, the controls and mechanics of Pigeon Wings are what truly make it special. You control Pigeon’s plane by tilting your device forwards and backwards to raise and lower its altitude. The entire game is exclusively played with only the aforementioned tilt controls. This aspect of the game might initially be a make or break situation for some players, but I assure you that the controls feel incredibly tight and responsive. Somehow, if you try the game and you still don’t like the feeling of the controls, never fear. They plan on including an option for touch-based controls in a future update. All I can tell you is that I will never use them. They are the best I have personally experienced on mobile. I can’t forget to add that Pigeon Wings has Apple TV support and can be controlled via your phone. This doesn’t do anything miraculously different but I loved playing on my Apple TV when possible. 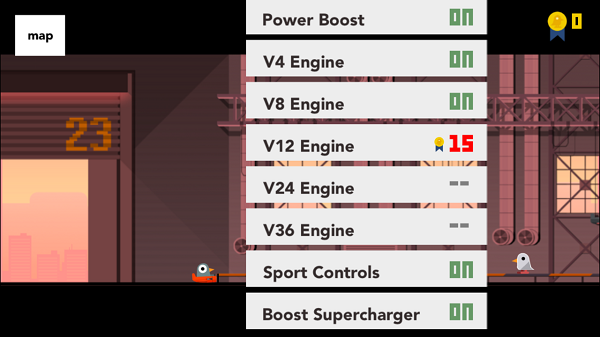 Fortunately, the looks and sounds of the game are as good as the controls. The graphics are cute, colorful, and remind me of a children’s storybook. The game’s sound effects and music are detailed and fit extremely well with what happens on-screen. One of my personal favorites to hear/experience was the ambient noise that goes on in the hangar when you are upgrading your plane. You can tell a lot of time and effort went in to making this game look and sound great.

Honestly, I have absolutely no complaints when it comes to Pigeon Wings. On top of that, there will be 20 more levels, an endless mode, and touch-control support added in future updates. The only minor suggestion I have for the game is that I wish there were a few more upgrades for planes within the hangar. That’s it.

Pigeon Wings is the epitome of what makes games on the mobile platform so unique and one-of-a-kind. It has tight controls, smooth gameplay, an attractive art style, and great music. Do not hesitate on letting this one “land" on your device. Don’t forget to compare your in-game scores to others within our forums and feel free to leave impressions of your own!