Practically every week is a difficult week to pick just ONE game for the Game of the Week, but some weeks are far tougher than others. This is one such week. There were over half a dozen games I was considering for this feature, and in the end one has stuck out just a wee bit more than the others, and that game is Pigeon Wings ($1.99). If you read my post from last month announcing the game’s imminent release, you may also recall that this project started back in 2015 as the passion project of just two people. It was a long time coming but based on how polished and fun Pigeon Wings turned out I’d say it was well worth the wait. 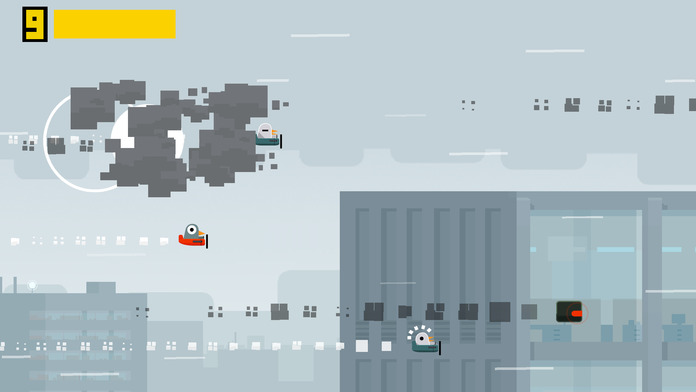 As for what you do in Pigeon Wings, allow me to refer back to what I said in that previous post: “You hold the left side of the screen to accelerate, and tilt your device towards or away from you to change your altitude. The right side of the screen is reserved for boosting and shooting. As mentioned the game is extremely fast and you’ll need to pay attention to subtle clues in the environment that will help alert you on where to go. If you crash into something, that’s all she wrote. The game is level-based and features boss fights every so often to break up the action, and there’s even a storyline told via very Metal Gear-esque communicator window cutscenes. I love it!"

One of the big points of contention for people is in how Pigeon Wings uses tilt to control your pigeon. While the developers will be adding a touch option in the future, I want to take this time to advocate anyone who thinks they hate tilt controls to give the ones in Pigeon Wings a try. First of all, the tilting forward and backwards to raise and lower your altitude is FAR more enjoyable than the typical tilting left and right that a lot of tilt games use. It quickly becomes second nature and requires such subtle movement that you never feel like you’re awkwardly waving your device around like a madman. Plus it gives you such a high level of granularity in your control that I don’t even think touch controls could ever match up. I’m happy they’re adding the option for those who want it, but there’s no way I’ll ever play without tilt now.

Games like Pigeon Wings are what mobile gaming is all about to me. A small project from a small developer, highly polished in every way, fully premium and just a couple of bucks, and filled with well-designed levels and plenty of heart-pumping racing moments. The competition that has broken out between our forum members (including the developers themselves) who keep going back and forth trading best times on each level has been really enjoyable to watch too, even if I can’t come anywhere close to competing myself. Take my advice and don’t let the tilting scare you off, and with 50 hand-crafted levels to master as well as an endless mode coming in an future update, Pigeon Wings is the kind of game that I don’t foresee ever leaving my beloved iPhone.