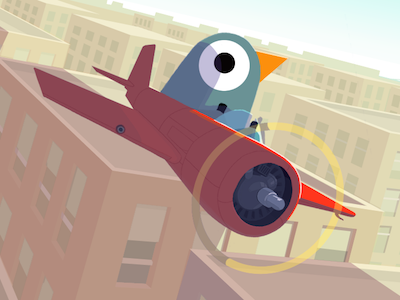 Way back in July of 2015, indie developer Ignacio Schiefelbein in collaboration with Kris Hattori announced a fast-paced side-scrolling pigeon racing game called Pigeon Wings on our forums that he intended to finish up and release in about two months’ time. Well, you know what they say about best laid plans. The game did not in fact launch in two months but Ignacio popped back into the forum thread in May of last year to let folks know that Pigeon Wings was still in the works. Fast forward another year to another forum update stating that the game was basically finished and just needed some quick beta testing from any volunteers. That testing seemed to go off quite well and at long last Pigeon Wings is about a month away from finally launching.

I’ve actually been able to play a pre-release version of Pigeon Wings and let me tell you, don’t underestimate the cute pigeons in this game, it is one tough mother! You hold the left side of the screen to accelerate, and tilt your device towards or away from you to change your altitude. The right side of the screen is reserved for boosting and shooting. As mentioned the game is extremely fast and you’ll need to pay attention to subtle clues in the environment that will help alert you on where to go. If you crash into something, that’s all she wrote. The game is level-based and features boss fights every so often to break up the action, and there’s even a storyline told via very Metal Gear-esque communicator window cutscenes. I love it!

Pigeon Wings reminds me a lot of Laser Dog’s excellent Alone ($0.99) if it got together and had a baby with Canabalt ($2.99). Basically, as easy as it is to dismiss games featuring birds or cutesy graphics, don’t slip on this one as it’s very skill-based, controls wonderfully even if you’re not big on tilting, and as some of the beta testers have said it’s polished to all heck. I’m really hoping that this “month away from launching" actually means a month away from launching, and not 2+ years like the two months away estimate meant last time. I’m confident it does though, especially after playing Pigeon Wings and seeing how complete it is, so keep this one on your radar and once it finally does launch we’ll be sure to let you know.