In years to come, the App Store will be both commemorated and condemned for revolutionising the delivery of digital content, implementing the use of innovative gaming inputs, and instigating an industry-wide transition away from fully priced releases. However, one of the most profound impacts this emergent platform has had on video games has been its ethos of ‘show, don’t tell’. Monument Valley ($3.99), Sword and Sworcery ($3.99), and a number of landmark titles have fought against the limitations of a handheld device to completely immerse the user through pure aesthetic bliss. Despite not originating on the iPhone, Linelight ($1.99) is the next notable independent release that champions these values, through slick puzzles, accessible controls, and stunningly dynamic visuals and audio. The resulting concoction is an extremely memorable mobile experience that, while by no means perfect, is far grander than its subtle minimalistic design suggests. 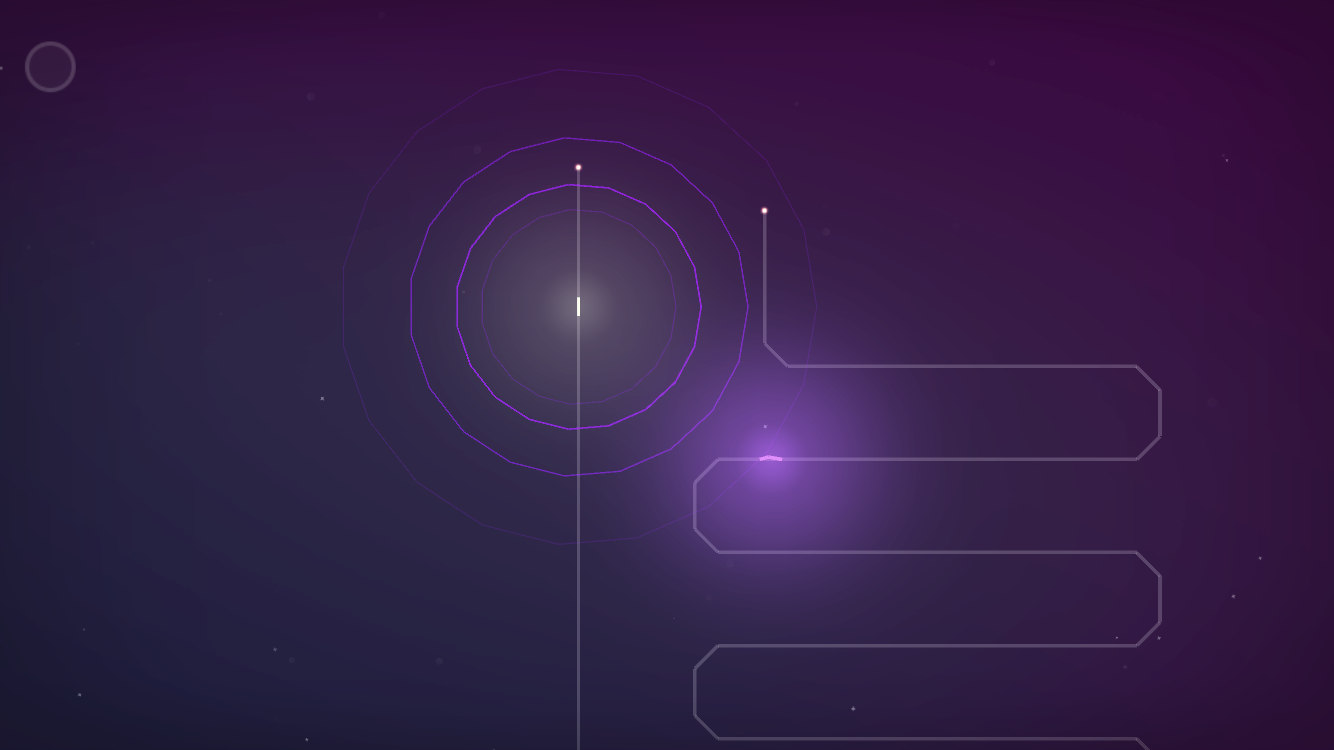 Linelight exudes charm in every aspect of its design, presentation and gameplay, and elevates what would otherwise be an agreeable puzzle game into one that feels like an emotional journey. Through using freeform joystick controls, you send a glowing white bar across numerous challenges full of obstacles, switches and platforms in an interconnected world. However, Linelight is by no means a lonely existence – other colored bars can be encountered across the six worlds, all of which have a unique behaviour that must be both harnessed and understood to proceed. For example, an ominous red light is predictably deadly in its perpetual march onwards, a yellow line only moves upon touching the screen, and a purple light is propelled with mysterious magnetic powers. Apart from merely introducing new mechanics to learn, the variety of intriguing entities within Linelight’s 200 unique puzzles results in a vibrant environment, lit up with the sensory appeal of a colorful Christmas tree. 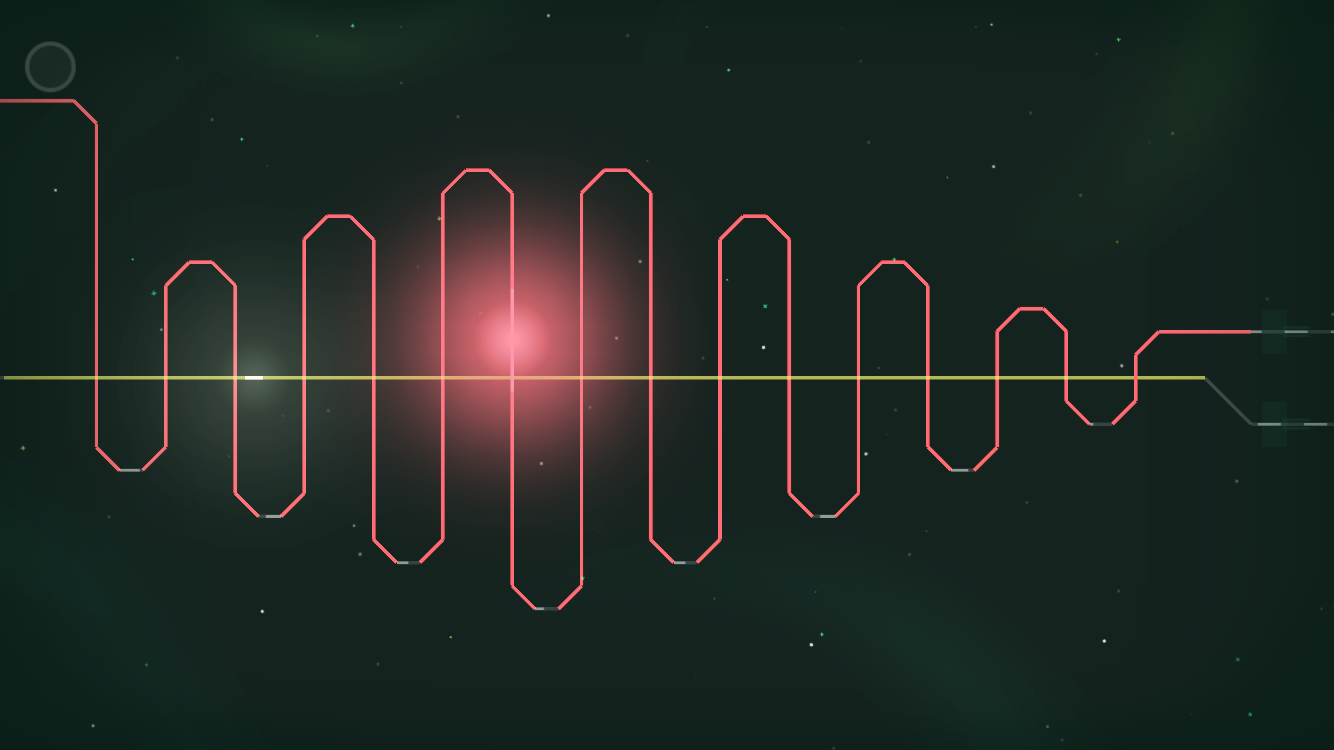 Linelight fully embraces its minimalistic aesthetic principles to devastating effect, although it’s the soundtrack that provides the bulk of the emotive power within the game. Music crescendos when the screen flares up with activity, and instruments are removed and added at will to complement the action taking place within the game’s worlds. Best of all, a beautifully poignant harp-driven melody accompanies the strikingly melancholic climax to each level, whereby another colored line that may have acted as an obstacle comes to your aid in a tragic act of self-sacrifice. This end phase is repeated in every world, however the powerful harp track will make each successive culmination as mortifying as it was in the beginning. As the developer rightly claims, you will develop a relationship with bars of light without exchanging a word in Linelight, and the absurdity of that statement underlines the effectiveness of the audio and graphical prowess within the game. The generic overworld songs may end up blurring into one (barring an excellently foreboding and pulsating theme for the fifth world), but when that one track is so great, it is really hard to complain. 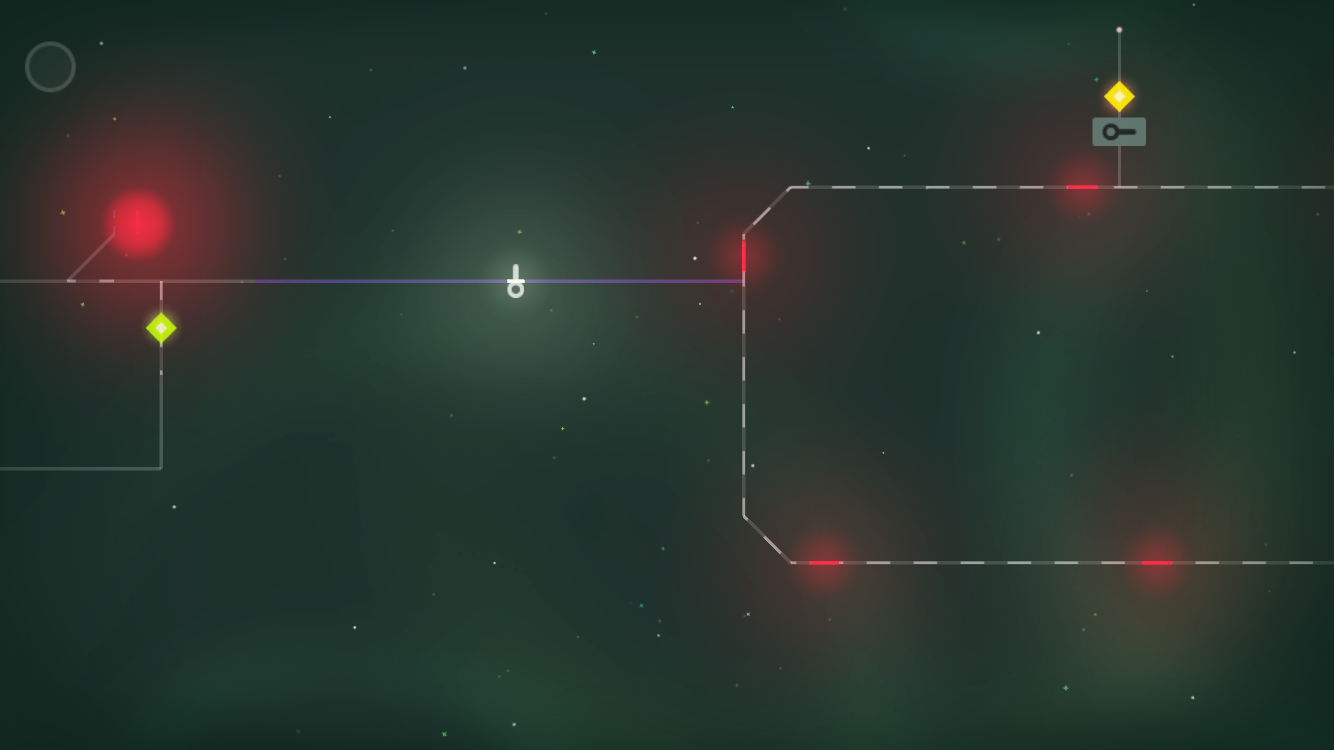 These aesthetic elements that accentuate Linelight’s minimalistic ethos are also present in virtually every other facet of the game’s design, and ensure the immersive visceral light show is not interrupted by clunky logistical flaws. There is no UI to speak of in Linelight, and no laboured explanation as to how a certain challenge or new obstacle must be overcome. The game respects your intelligence, and uses various visual cues and its inherently linear level structure to replace the need for an overbearing tutorial segment. The connected nature of the game’s worlds may be mechanically superfluous, but allows for the sense of progress as you slide across the multiple separate puzzles within each level. When Linelight hits top gear, it is a fluid and natural experience that is relentless in pace, but also meticulous in the way it makes the most of its relatively scarce content. With controls that feel perfectly suited for the touch screen, Linelight uses its simplicity to create an incredibly accessible puzzle title that is all the better for never straying off the beaten path. 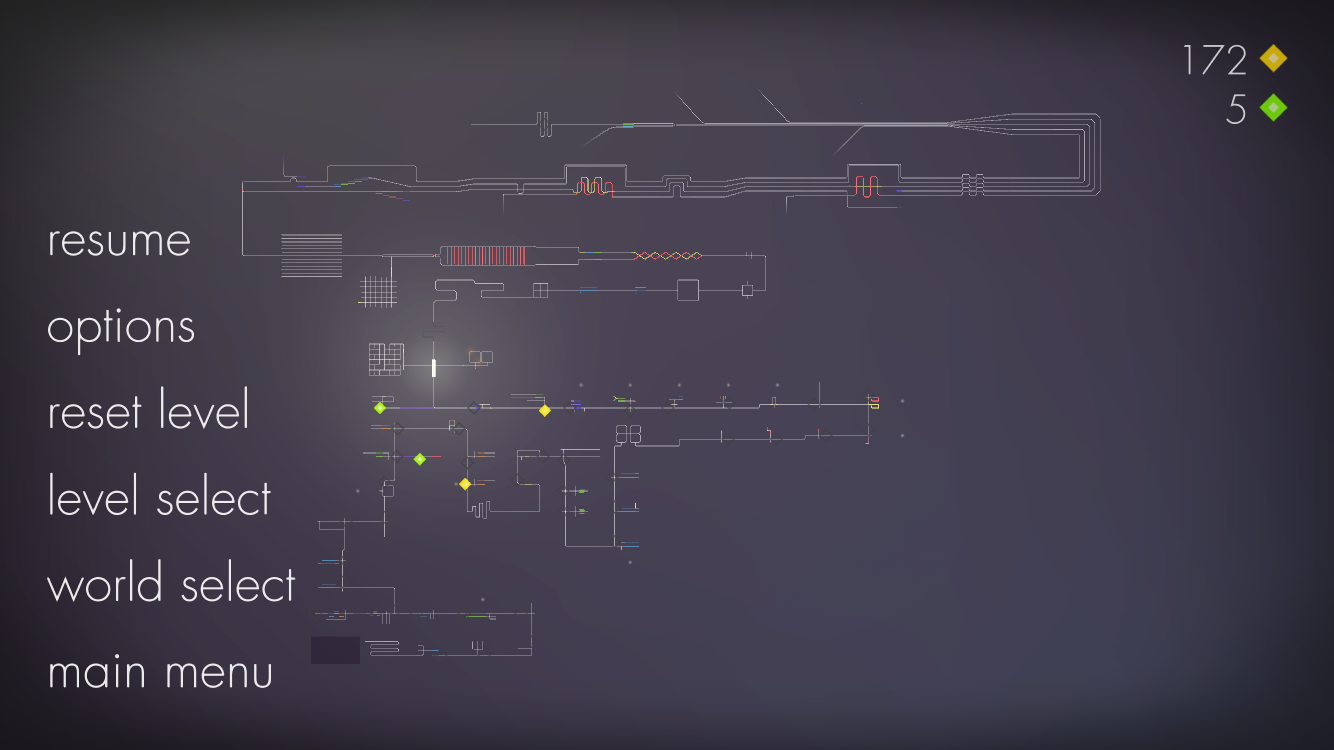 However, the majority of Linelight’s flaws come as a result of its determination to stand steadfast by these core principles. Keeping controls as one solitary input reduces clutter, but also means that you do not have the level of control required for some of the more nuanced and time-based challenges in Linelight. This problem is exacerbated when the magnet levels are introduced later in the game – while one of the better concepts in Linelight, the need to press and hold onto your bar to activate the skill often obstructs the display and inhibits your ability to quickly navigate out of the way of environmental obstacles. While the latter issue can be easily fixed with an alternate button to use the magnetic ability, the problem with loose controls is one inherent in Linelight’s level design, and one that may ultimately come down to personal preference. I greatly enjoyed the slower paced, methodical challenges that enabled my light to continuously flow across the screen, but when more reflex-based puzzles came up – especially ones that resulted in a number of deaths – the immersion was lessened. 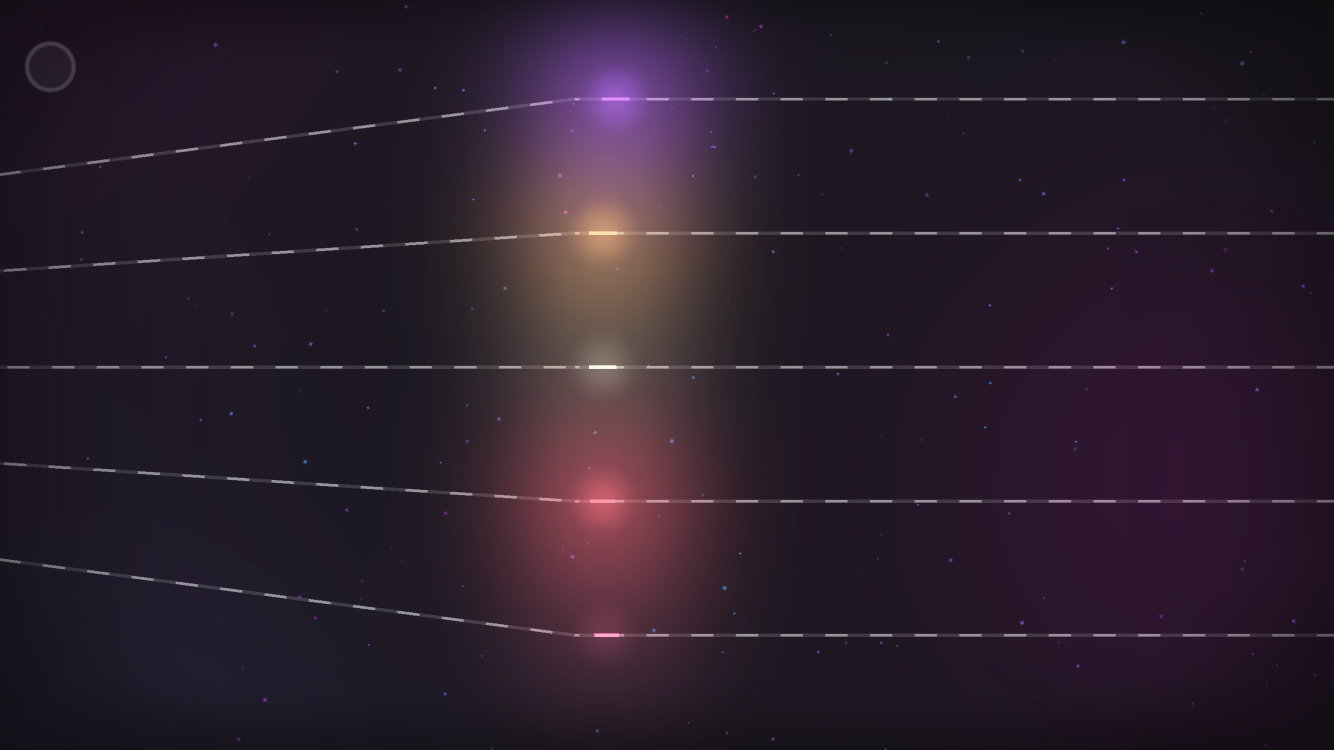 Control issues aside, Linelight offers a considerate amount of content for its $1.99 cost of entry. The six worlds will only last for around two to three hours, although the abundance of yellow and green stars – the latter being found in secret locations hidden around each level – will ensure completionists have something to do after the main campaign has been completed. Although these bonus puzzles can be as jarringly difficult as their protruding locations may suggest, the way the developer has kept them and many of the harder yellow stars optional allows the player to cater their Linelight experience to the level of challenge they prefer. While the two bonus worlds from the console iteration are allegedly on the way as a DLC update, the way that Limelight culminates in a legitimately epic epilogue is a glowing testament to the subtle storytelling devices that the developer has included throughout the game. Having all of the different colored lines join forces in a rainbow of neon light and then slowly diverge and dissipate will likely be one of my favorite video game moments of 2017, and acts as a satisfying mechanism to conclude Linelight in a complete fashion.

Ultimately, the occasional frustration within Linelight is born out of its uncompromising dedication to its core principles, which is a necessary evil considering how effective the execution the game’s concept is. With audio and graphical excellence throughout, both of which are intrinsically linked, Linelight ends up being far more than the sum of its parts, all the while not sacrificing its entertaining puzzle gameplay for some greater sanctimonious goal. Through being a game that embraces accessibility at its very core, Linelight becomes a game that anyone can play, and everyone should play.