The original Motorsport Manager was a very entertaining racing game that I played quite a lot, initially at least. While the racing part was fun—even though I sometimes felt that my choices didn’t have much of an impact—the lack of long-term driver development made each season feel insulated from the rest, which blunted my desire to play through multiple seasons. Still, the game was accessible to those who weren’t that much into motorsports and good-looking enough to draw the attention of people just randomly looking at my phone screen. As one of the first motorsport management games on the App Store, Motorsport Manager definitely entertained, and I’m happy to say that Motorsport Manager Mobile 2 ($1.99) (MMM 2) has improved the original formula (pun intended) and turned it into a much more substantial game with a lot more fuel in the tank, despite some relatively small issues. 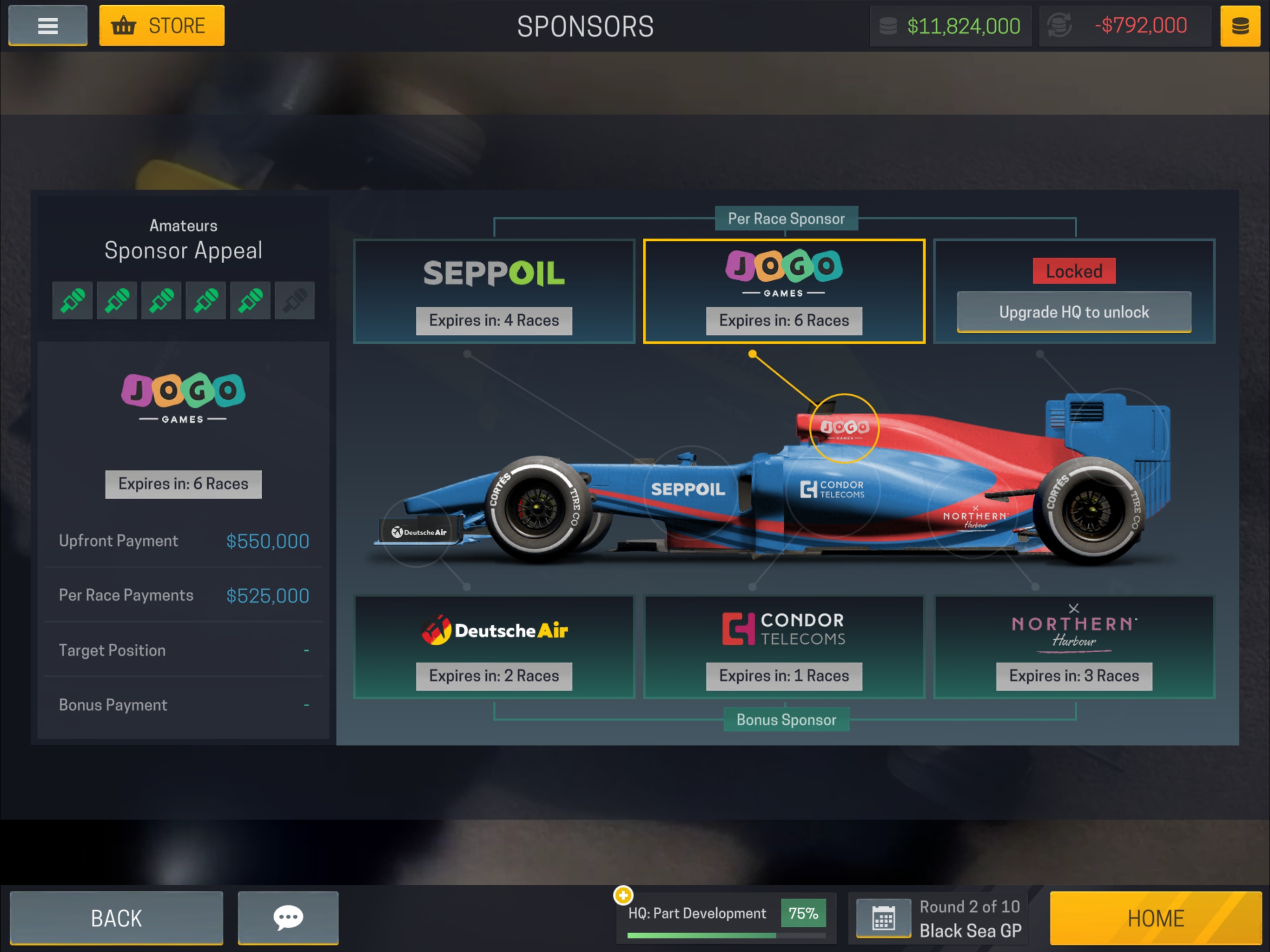 In a nutshell, in MMM 2 you build a racing team, hire drivers and engineers, and then manage your drivers during race day. MMM 2 has improved every aspect of the original, from the car development to race day simulation and the drivers market. You can now design individual car parts to strengthen various weak points (build a new front wing, rear wing, brakes, etc), and the quality of those designs depends a lot on your current engineers, which makes hiring the right engineers essential. You can always buy new parts, but those cost much more money and you might not always find the part you need. And you’ll have drivers complain if their car isn’t up to their standards, and when they do complain, their ratings drop.

In order to develop various parts, you have to upgrade your HQ accordingly. The HQ now has three different areas you can research—Financial, Part Development, and Drivers—so you’ll have to decide where you want to invest because on the one hand you have some essential areas (like the ability to research new brakes) and some that are very useful but technically not essential (like making a bit more money per race). Upgrading your HQ takes money and time, so you’ll have to plan your moves through the tech trees carefully. 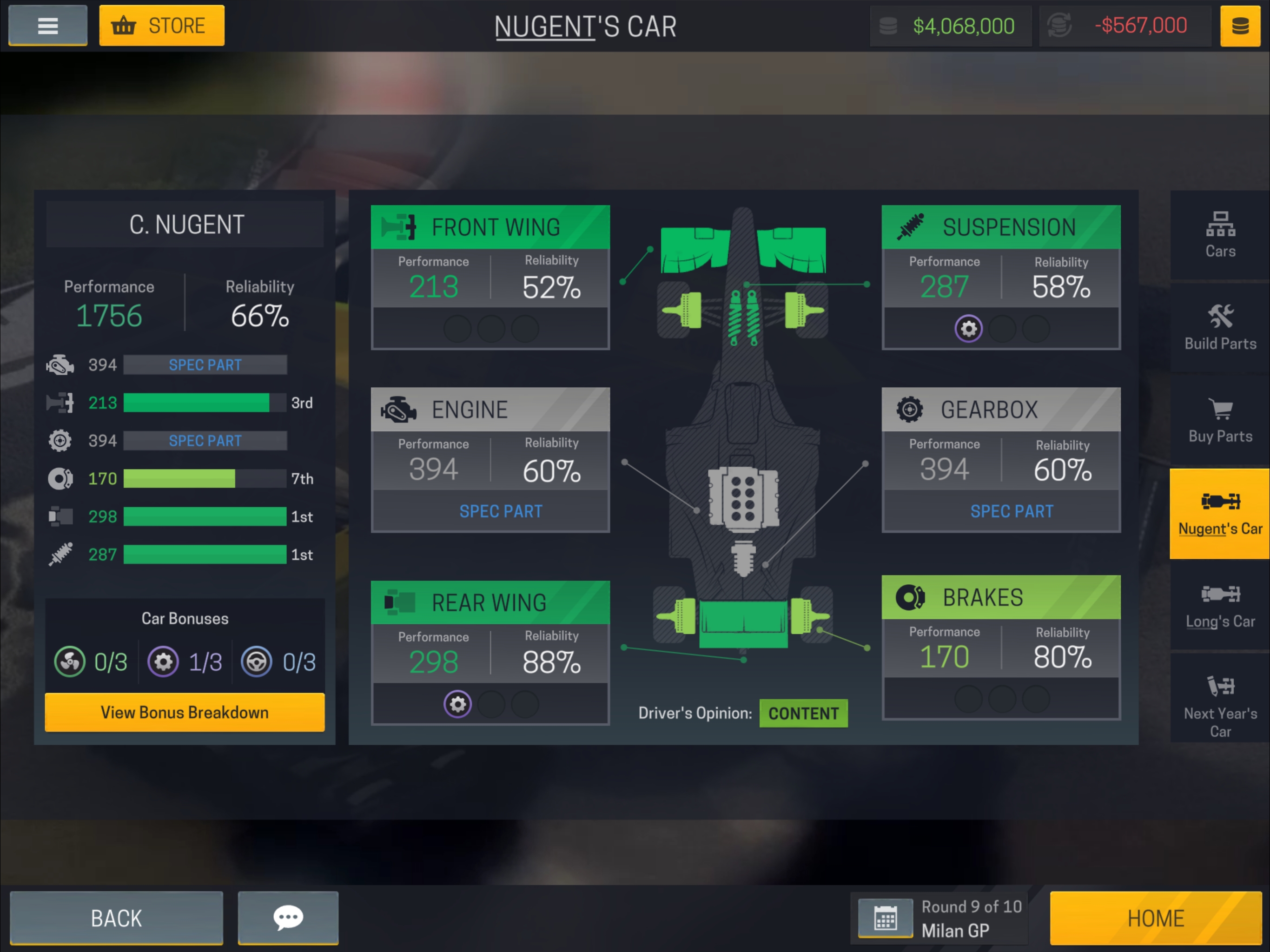 There are also other development bonuses that an engineer, a research branch, or a specific part purchase can add to the team, and those bonuses open up additional improvements to your can, including better starts, fewer errors, improved fuel efficiency, and more. As you can see, there’s a ton of depth now in the development part of the game, and if you want to win races, advance to better championships, and keep your drivers happy, you’ll have to plan your moves carefully.

Drivers also have a lot more depth this time around, with each having six stats, specific sponsor appeal, and various stat modifiers that will come and go throughout the seasons. For instance, if your top driver thinks the other one is slower than a turtle on ice, she might pout to the degree that her stats are affected. There are also stat modifiers that come from the HQ, and those again can make a big difference down the line. 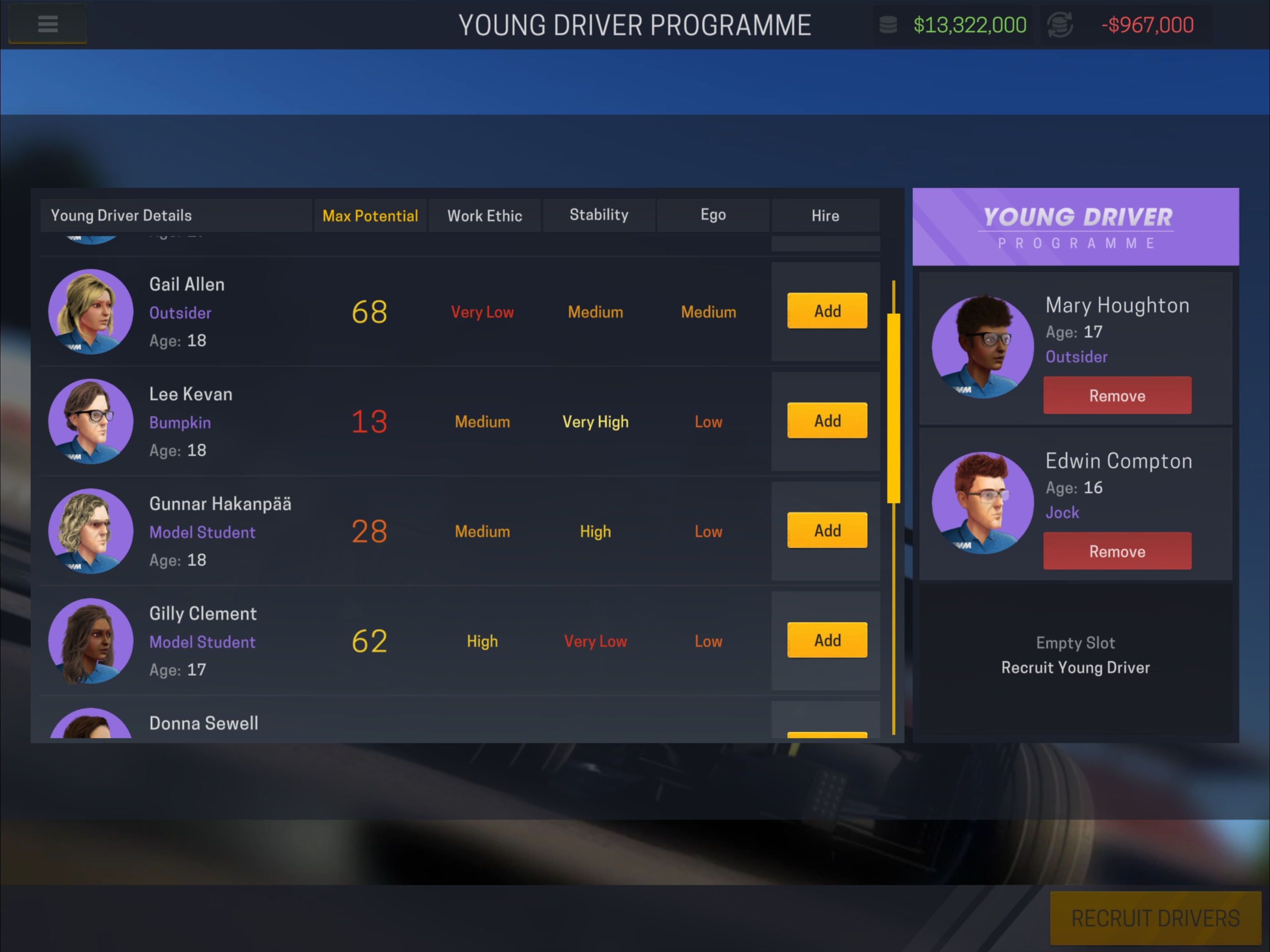 You can fire and hire drivers as you see fit, but the hiring process in MMM 2 doesn’t work that well. You have 3 opportunities to make a deal, and if rejected, you have to wait 90 days to make another offer, which is forever in terms of game time. The problem is you are making your negotiations blindly since the game doesn’t give you any feedback on why the driver is unhappy with your offer; does she want a better salary, better signing bonus, better position in the team? It took me quite a while to replace my crappy starting driver, and I’m sure I overpaid for the new one.

Your drivers age and lose their skills as time passes, and you have junior ones to take their place. The junior driver development is like a fun mini-game where you see your drivers improve (or not) throughout the year and adding focus points to the ones that look the most promising. It’s a fun little thing that makes your team feel more complete and your decisions have a bigger impact on the future of your team. 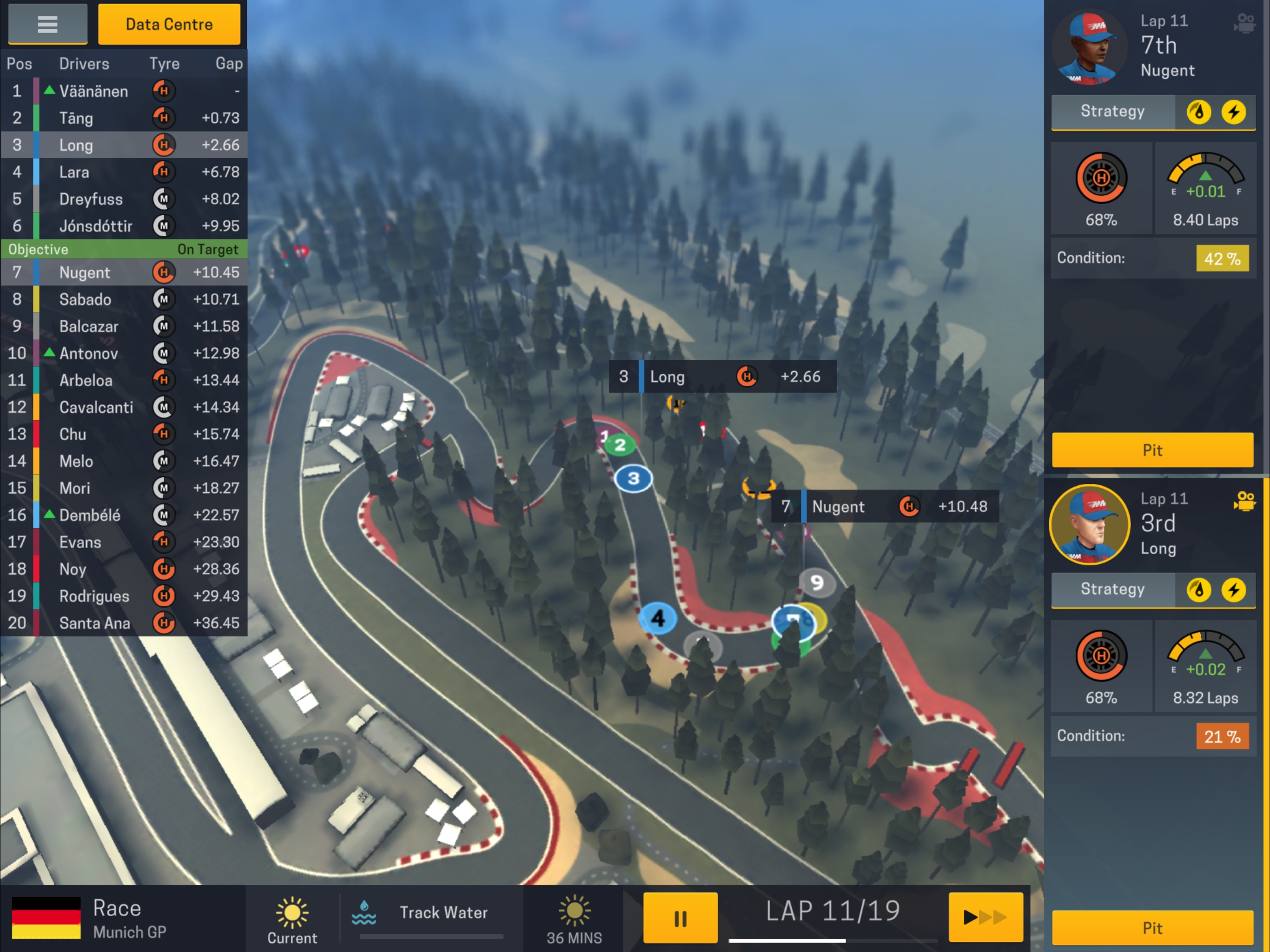 And if all these new additions weren’t enough, there are also some important changes on the most entertaining part of the game, the race day. The game now has many more tire compounds, which sacrifice grip for longevity or the other way around, and this opens the door to more strategic options during the race. You can try and outlast everyone on the track by trying to complete the race without any pit stops (if your tires can take the punishment and still let you be fast enough to compete) or put the softest, grippiest tires and try and make up for the extra pit stops with the extra speed. One thing I wish was different is the length of the pit stops; they sometimes felt too fast, and that negated some of my craziest strategic gambles. I think extending the pit stops a bit would open up even more options.

In addition to the extra tires, the game introduces the option to turn the engine up or down, which allows you to use more fuel when you try to overtake or save fuel when you’re safe from other drivers. The engine modes add another wrinkle to your race day experience and are fun to play around with as you try to race to the limit but still have a couple of drops of fuel in the tank to make it to the end. And you also have team orders now; you can tell your leading driver to let her teammate through if their strategies are different or one has better tires. Add to all this more spins and more mistakes and, of course, weather, and you have a fun mix. 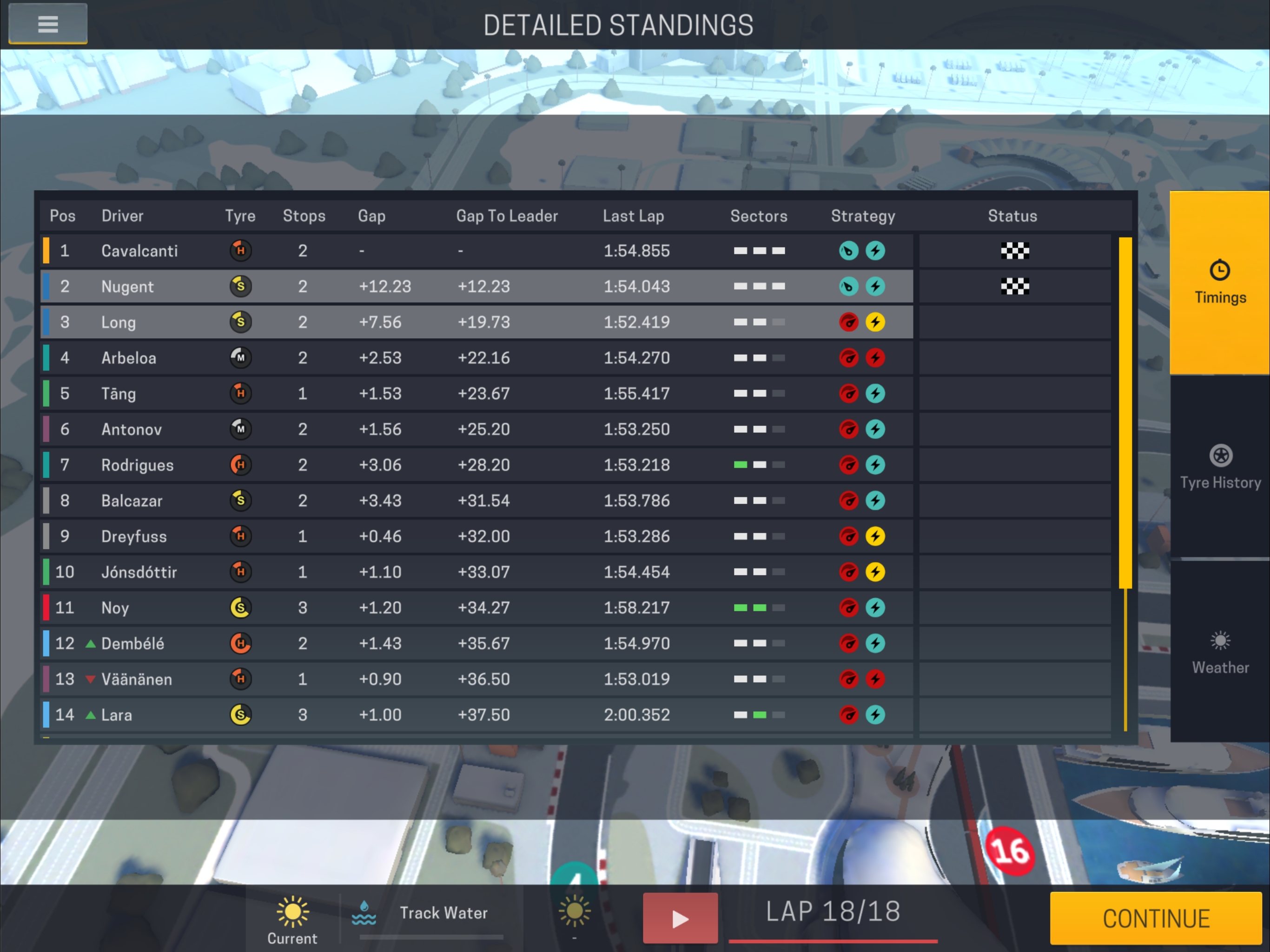 The game provides plenty of information regarding timing and your opponent current strategies and tire selection during the race, but for a racing fan like me, there’s quite a bit missing. First of all, I wish I could explore the race track more prior to qualifying so I could try and figure out how to run my cars; I like that you only have time for a few qualifying runs—which forces you to gamble—but I often felt I didn’t have enough info when starting my runs. Yes, the game does tell you the number of turns and how long drivers go full throttle, but that’s not always enough. Sometimes you’ll get random tweets at the start of a race that give you clues as to the nature of the track, but many other times you don’t.

The other info I would want on screen the whole time (without having to go to the data center) would be the current lap section times compared to the rest of the drivers. The game nicely lets you know whether your previous section (laps are split into three sections) was faster or slower than the one from your last lap or even the fastest of all, but those little bars are absent from the racing screen, which makes me have to go to the data center a bit too often. Having that detail present would have gone a long way towards letting me focus on the racing.

Still, the racing is really fun, and there were some pretty crazy moments when I managed to win without stopping once or managed to have the car collapse under the driver with barely a lap to go, all moments that make for thrilling racing and a fun game. Even more emphasis on driver rivalries would have been welcome—especially when you’re neck to neck with another driver throughout the season—but there’s enough there to make the racing feel like a simulation. 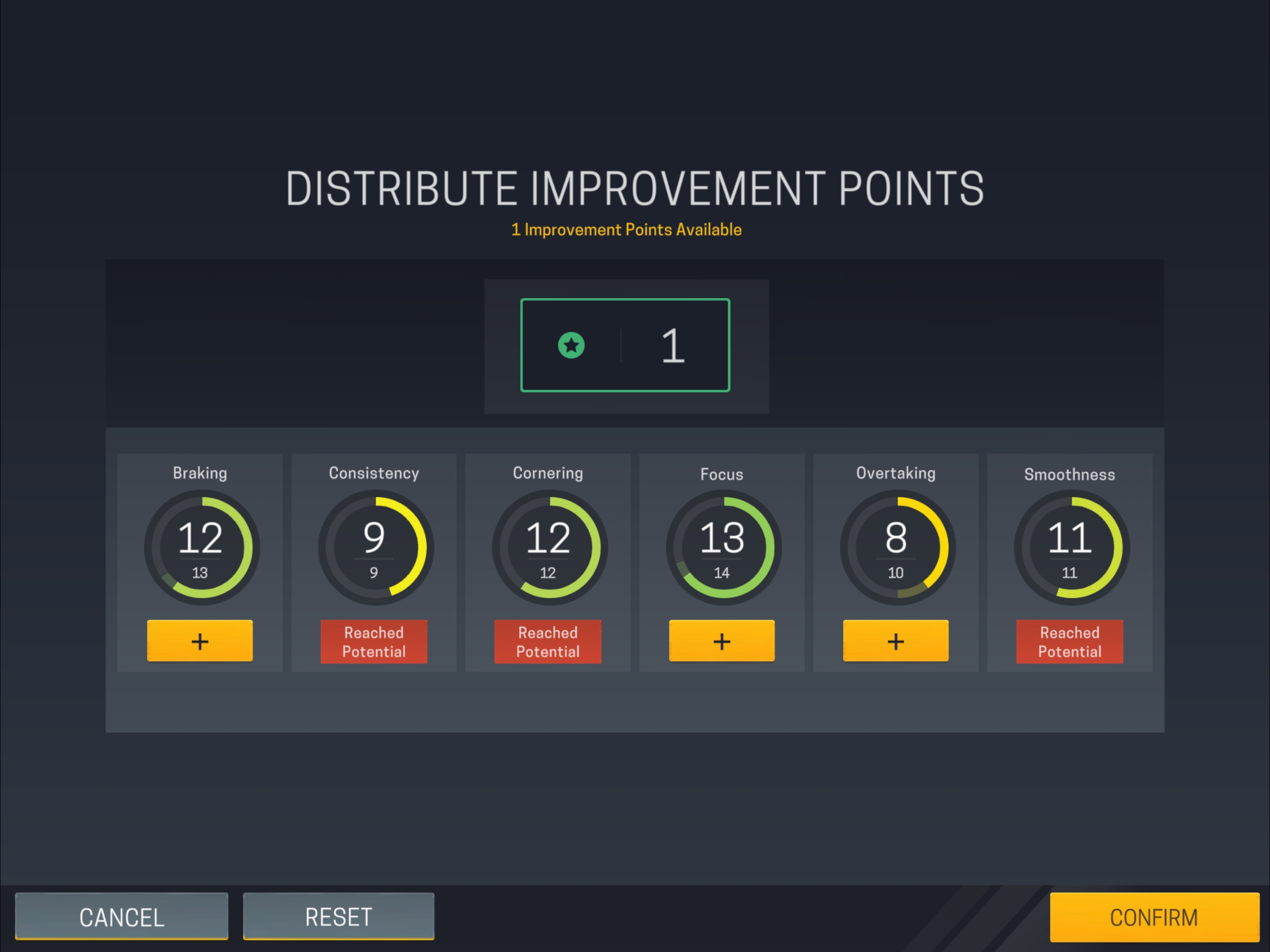 Visually, MMM 2 is still pretty great, with the racing looking really nice (make sure you turn the Blur on in the Preferences if your device can take it), and the menus looking good as well. This is one of the best looking management games on the App Store, so it’s hard to complain about anything in that department. The UI is also pretty well designed and looks fine both on the iPad and the iPhone (iCloud saving is supported by the way), and you should have no problems navigating the game. There are perhaps a few too many different windows, but that’s me nitpicking more than anything. Overall, the UI didn’t get in my way, which is good.

If you’re a fan of management games, Motorsport Manager Mobile 2 should be a no-brainer purchase for you. The game offers ton of content to play through—3 different championships, 16 tracks—and enough depth to keep you playing longer and coming back to it often. And there’s a pretty good tutorial too if you aren’t a racing fan. The game costs $3.99, and there are two IAPS, a Game Editor for $6.99 (lets you edit the drivers, teams, and tinker with the rules) and a Chairman’s Payment for $6.99, which gives you more money per race (making the game easier to play). The editor is quite fun to have if you like the game since you can turn MMM 2 into a more faithful Formula 1 management game. Motorsport Manager Mobile 2 is a blast to play, and you should go grab it.