When I sat down to try Motorsport Manager ($5.99), I thought it would be the perfect thing to poke at while listening to a podcast. After all, I wouldn’t be expected to drive the cars; I’d be running the biz and laying out the race strategy. A half-hour in, I realized I hadn’t absorbed a word, because I was so fully engaged in growing my fledgeling racing empire and watching my drivers tear up the track. It’s never overwhelming, nor is it too light to maintain interest. Motorsport Manager finds a nice spot in the complexity spectrum wherein it requires frequent decision-making, without ever inducing paralysis by presenting too many options simultaneously.

Motorsport Manager makes an immediately striking impression with a stylish color palette, and a nifty tilt–shift camera effect replete with chromatic aberration. Presentationally, we’re a far cry from the stodginess of the average sports management simulation. The only disappointment in this area is on the audio side; the front-end is backed by a very short music loop that grates quickly, and the sound effects during races seem to have no particular relation to the on-screen action, though they effectively establish a racetrack ambiance. 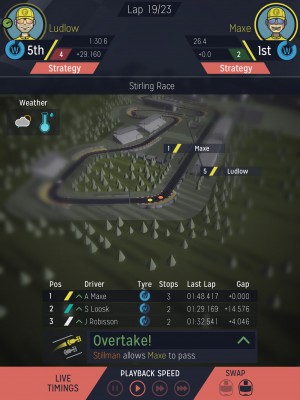 Activities in the game may broadly be considered in three categories. Foremost is the task of establishing and running the team, which entails hiring and firing drivers and engineers, allocating research, courting sponsors and fans, etc. So-called dilemmas crop up periodically, forcing on-the-spot binary choices requiring some sort of sacrifice. The second phase is setting qualifying times for races to determine racer positions. A simple matrix of gearing, aerodynamic and tire options creates a variety of configurations, and a little intuition and experimentation is required to achieve the best standing. If that sounds a little boring or fiddly, there is always a recommended setup that will yield reasonable results.

Finally, the heart of the game is in the races. Again, managing the action comes down to a few simple choices with immediately comprehensible effects. At any given time, drivers can push the performance of their cars, drive conservatively or something in between. This impacts tire wear, and thus the player’s decision of when to have the drivers pit and what kind of tires to use (be they soft, hard or designed for wet conditions). It doesn’t seem like a lot to deal with, but with two drivers and at times a thin margin for error (and the ability to run the simulation at high speed), it’s enough to require a surprising amount of alertness. Throw in a variety of unpredictable catastrophes, and it’s never boring. 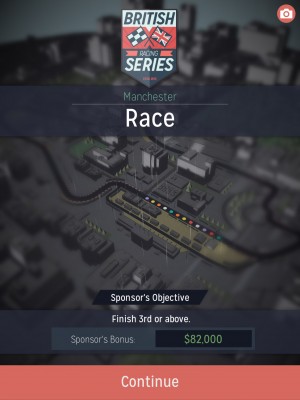 Successful racing leads to a progression through successively more difficult tournaments, requiring more and more expensive employees and facilities, which raises the stakes significantly. Losing a few races and not receiving the prize money you were counting on when you commissioned that new test track can be devastating. The tournament structure lends itself to comebacks and dramatic fights for survival. This narrative is commented on through a fake twitter feed that sees fans, drivers and sponsors weighing in on events, though it’s a bit repetitive and bland; it doesn’t hold a candle to the absurdist Byrdr posts of Ridiculous Fishing.

There is real “social integration” in a few spots. Motorsport Manager offers bribes in the form of in-game currency in exchange for sharing things. Considering the depth and breadth of creepiness on the app store, it’s a relatively unobtrusive and victimless promotional technique, but there we are. The most significant charge I would level against the game is related to interface design: in splitting the difference between designing for phones and tablets, elements seem excessively spread out on tablets, but cramped on phones. It’s not a major impediment to usability, but it’s noticeable.

These minor gripes are easily ignored when it’s the middle of a tournament series, the team is hemorrhaging money and a clutch podium is needed to get back in the black. That series of approachable choices and their many axes and intersections is itself an engine tuned to create drama. As someone with no particular affinity for motorsport or management, I can nevertheless offer a very strong recommendation for Motorsport Manager.