Well, it’s been a while, hasn’t it? Two and a half years have passed since I was delightfully surprised by Lowlander ($1.99), the cool Ultima 2 homage from developer Flat Black Films. The game did a great job of capturing many of the things that made the early Ultima games fun while simultaneously sanding off a few rough edges in consideration of the platform and the passage of time. While players might have expected a sequel to the game to look to Ultima 3 for inspiration, the game’s developer instead opted to deliver a slightly more refined, much larger adventure in a similar mold to the first game. That left me hemming and hawing a bit about doing a review, as it feels a bit like reviewing a foot-long meatball sub after I already reviewed the six-inch. Did you like the six-inch sub? Do you want a lot more of it? If so, here you go.

While Lowlander 2 ($2.99) doesn’t do a lot to distinguish itself mechanically from the first game, there’s nothing particularly wrong with that. In as far as this series attempts to deliver an experience with a vintage feel on a modern mobile device, there’s not really much more to do than what the first game already accomplished. Half of me would have liked to have seen Ultima 3-style parties, but the other half thinks it would needlessly complicate a game whose straightforward nature is such a big part of its appeal. What issues existed with the first game were largely tied up in things like difficulty balancing and its fundamentally niche appeal, and you don’t need to rewrite the basic mechanics to address those things. 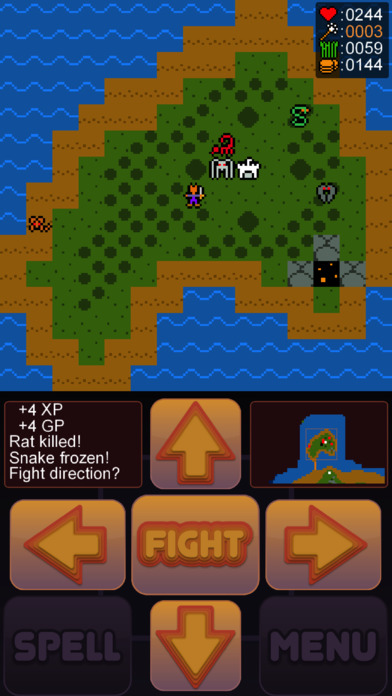 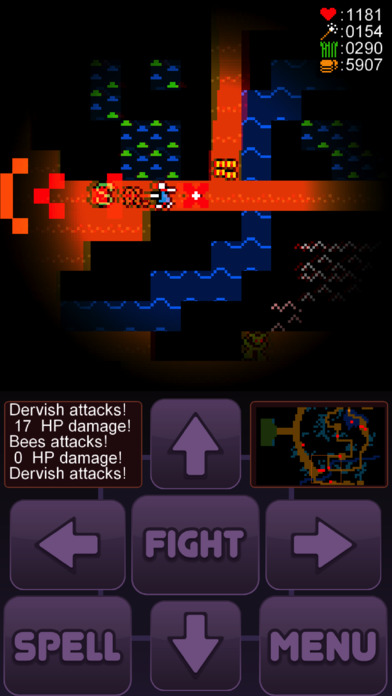 Lowlander 2 still has some problems with its difficulty curve, but it’s certainly kinder up-front than the first game was. It’s exceedingly unlikely you will starve in the first few minutes, for one thing. In making the opening parts of the game gentler, it makes the game more welcoming on the whole. You aren’t wandering around on an overworld map trying to find someone to sell you food before you die. Instead, you start in a town filled to the brim with useful gameplay advice. It cleverly and unobtrusively walks you through the basics by giving you some quests to complete in-town, so that when you finally hit your first death, you’ll have really earned it. The game builds some initial goodwill as far as difficulty is concerned, though it soon squanders it with a poorly-conceived stealth section that is both mandatory and the only one of its kind in the whole game. Things get a lot better after that, however.

For those who aren’t familiar with the first game, I suppose I should explain what kind of beastie this is. Lowlander 2 is a throwback to the CRPGs of the early 1980s. Specifically, Ultima 2. You control a single character who has to save the world by defeating a big bad. As you might expect, the path to doing so is not exactly a straight line. You’ll need to explore the overworld by land and sea, poke your head into a variety of towns, plumb the depths of a bunch of dungeons, and power-up your character by declaring a one-person war on any and all wildlife. It’s a turn-based game, and enemies will appear right on the map for you to fight. When you start the game, fighting isn’t much more complicated than pointing in the right direction and swinging, but as you play you’ll open up some new avenues of attack and defense. There isn’t a ton of strategy to the battles even in the best cases, though. It’s mostly about having a high enough level, decent enough equipment, and not doing anything stupid like letting multiple enemies make a hero pinata out of you. 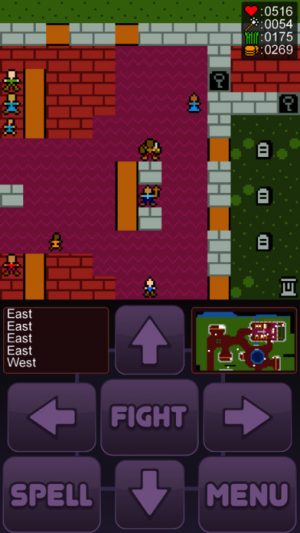 As the first game was, Lowlander 2 is a relatively non-linear game. You can explore a wide variety of locations right from the start, tackling the bulk of the quests more or less in your preferred order. Many of the quests are optional, but you are required to do some of them to move the story forward. Speaking of the story, Lowlander 2 manages to plant its tongue more firmly in its cheek than even the original Ultima 2. Pop culture references, memes, and callbacks to 1980s sitcoms abound, and the game’s script in general spends more time being jokey than not. That’s not going to be to everyone’s tastes, but I personally can appreciate an RPG that isn’t overly self-serious. Ultima 2 was also full of that kind of silliness, but it at times clashed badly with the game’s desire to have its more earnest sections taken at face value. Lowlander 2 is more consistent. You’re never more than a few dialogue boxes away from an obscure reference or dopey pun. I’d say a majority of the jokes don’t land all that well, but there are so many of them that I found myself smiling pretty often throughout the quest.

It’s a much longer game this time around, too. While the first game hit that sweet spot of being short enough to replay but long enough to mostly satisfy, Lowlander 2 almost doubles up on it. You can expect to spend about fifteen hours or more on this one. I don’t know that replaying it is as easy a swallow as the first game is, but the initial playthrough manages to maintain the same quick pace as Lowlander. In spite of the added length, it never feels like you’re getting bogged down or being made to jump through unnecessary hoops. Outside of that stealth section, anyway. The gameplay mechanics are simple enough that you probably won’t want to blast this game out in one or two sessions for fear of it becoming repetitive. I’d recommend approaching it as you did the first game in terms of individual sessions. You’ll just need more of them.

As before, the game is played in portrait mode and is easy to play with one hand. The high-res menus and UI clash a little with the retro presentation, but you get used to it quickly enough. It’s a fairly silent affair outside of a few sound effects and the occasional piece of music, though, so you’ll probably want to provide some tunes of your own. The visuals are a bit more colorful than those found in the first game, and you can customize your character’s icon a little. I’m not sure how well its look works for people without a fondness for Ultima or its contemporaries, but there’s something about buildings with their names written on them in giant text that gets my heart going a-flutter.

Honestly, I can’t really say that Lowlander 2 is much better than the first game. It’s bigger, longer, and more confident, to be sure. But where Lord British was spurred on by his competition to make the sequel to Ultima 2 a real game changer, Flat Black seems to have been content with making Lowlander 2 the very best Lowlander it could be.  This certainly isn’t a worse game than the original either, mind you. It’s of very similar quality all-around, which means Lowlander 2 should be of interest to anyone looking for a great RPG to play on their mobile device. Like its predecessor it’s deliberately trying to evoke an RPG of the early 80s, but if you can deal with that, Lowlander 2 is a great way to spend your money and your time.