Genre mashups are a tricky thing. Sometimes you take elements from two different genres and combine them into something truly unique, providing a fresh experience even for hardcore fans of the genres you’re combining. Other times, you mash together concepts that don’t complement each other and don’t gel well, leaving a hunking mess that doesn’t please anybody. Developer Nathan Meunier imagined replacing the fast-reactions needed to deploy missiles and protect your base from attacks in the arcade classic Missile Command with turn-based, strategic card-based gameplay, and fortunately for us his creation Missile Cards ($2.99) is one of those mashups that produced something really special. 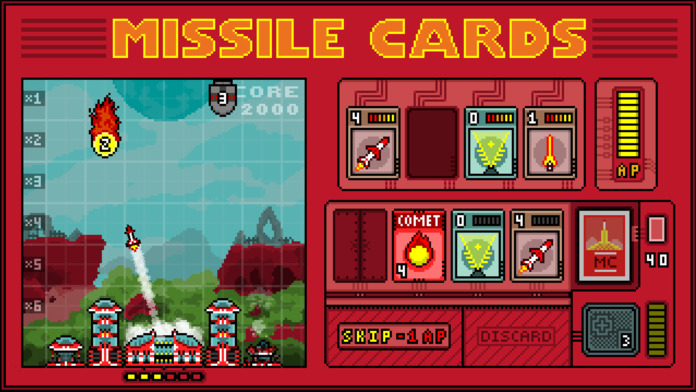 There are 3 types of cards in Missile Cards: Hazard cards, defense cards, and utility cards. Your main base is flanked by smaller sub-bases and they’re all situated on the left of the screen. This area is gridded, and attacks rain down towards your base one square at a time in turn-based fashion. On the right side of the screen you have your card deck, 4 spots for playing your cards, and a conveyor belt thing that moves cards from the deck across a second row of 4 spaces with the 4th space being the “activate" space of sorts. When a hazard card reaches this spot it appears on the grid and begins its journey towards your base. When a non-hazard card reaches that 4th space it gets shuffled back into the deck.

You have AP points which accumulate with each turn and dictate which types of cards you’re able to play at any given time. This is where the strategy comes into play. Should you put some defense cards in play early so you can build up their AP cost and they’ll be ready to play when you need them? Or will doing that allow too much time for the hazards to rain down on your bases. Your sub-bases can be destroyed once without it ending the game, and even sacrificing one of your own sub-bases can be used as a strategy at times. There really is a ton of layers to the game, and as you play you can unlock new cards and upgrade the various bases/decks in the game meaning the variety and strategy will only intensify the more time you spend with Missile Cards.

All that said, this is a very difficult game. Be ready for that. The tutorial doesn’t automatically happen when you first start, so be sure to hit the “How To Play" button and run through the brief tutorial to get your bearings. Then play a game on your own, and then go back and play the tutorial again. Trust me, it helps. Eventually everything clicks, but don’t be surprised if you get your butt handed to you in your first few games. It gets better, I promise, and it’s totally worth investing the time to understand the game fully. Just don’t let it scare you off at first. I wish all mashup games were as fantastic as Missile Cards, and I hope this one does well on mobile (it first launched on desktop) so that Nathan Meunier can bring some of his other card game ideas mentioned in the game’s forum thread to our devices in the future.