Let’s start this review with the obvious: building and managing a maximum security prison in this day and age can be a peculiar experience given all we hear about the way the real-life prison system works. And yes, I know that some people have found Prison Architect (Free) disagreeable because of precisely these reasons. Add to that how the game’s tutorial starts with having you build an execution chamber and then proceed to execute a murderer, and you can see why this game’s theme might not be for everyone. Those reservations aside, though, in terms of mechanics and gameplay variation, Prison Architect is a very entertaining game with tons of content and plenty of depth that will keep you busy for many, many hours. 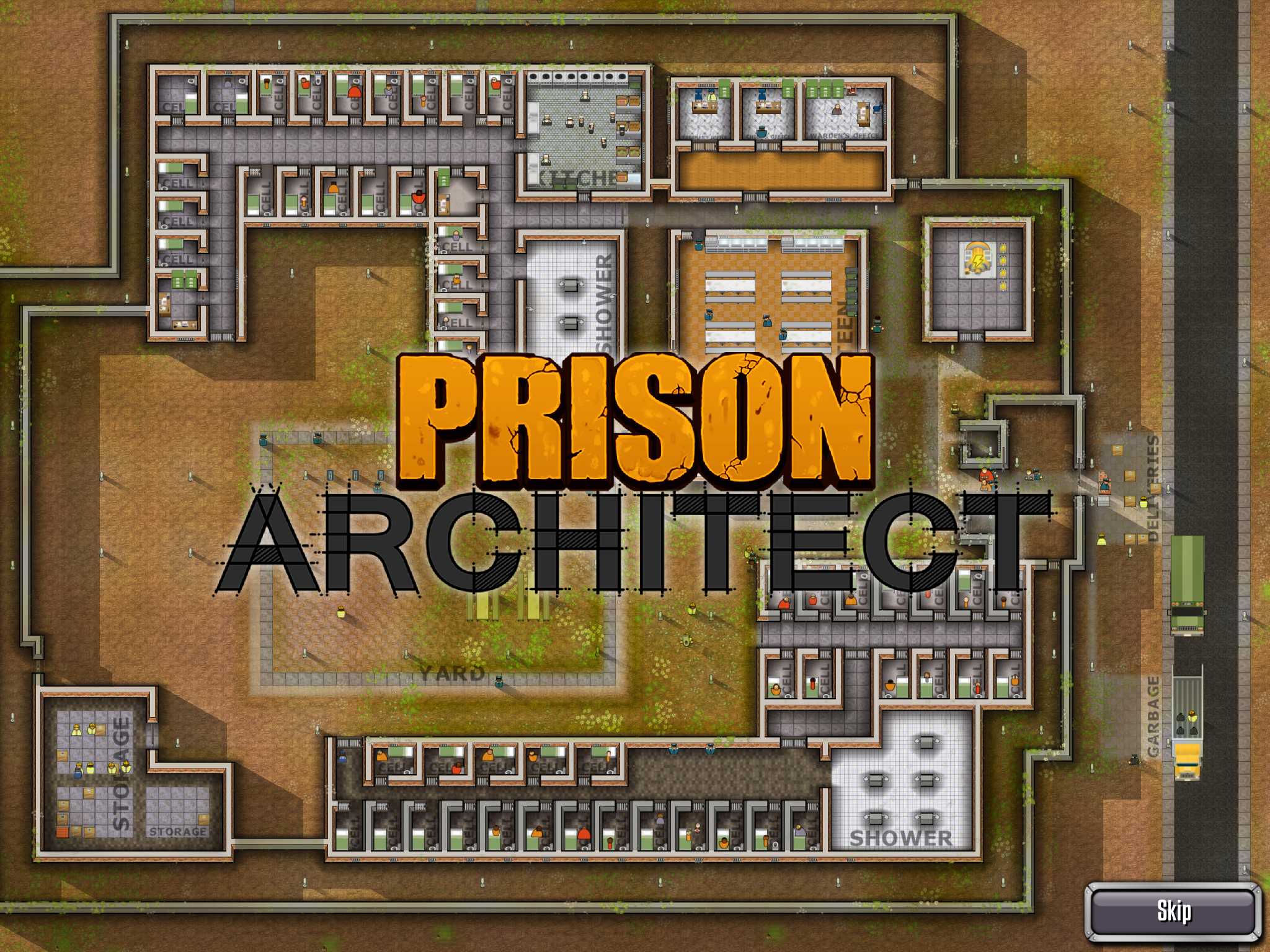 While the title of Prison Architect implies that all you’ll be doing in the game is building a prison, it’s actually slightly misleading; you are in charge of so much more than just designing a prison. Your duties extend to planning your inmates’ daily schedules, hiring the right kind of people to help run the facility, arranging for the prison to be “pleasant" enough so you can avoid riots, manage your tight budget, and much more. Prison Architect will definitely remind you of classic PC management games rather than modern mobile games when it comes to just how much you can control and how much tinkering you can do.

But yes, you also have to actually build a prison. The tutorial is good in guiding you step by step through the process of erecting various buildings, installing the necessary utilities like electricity and water—which can get quite complex—adding various necessary objects to the rooms, and so on. Building the facilities is very easy, and it won’t be long before you can make your prison look just the way you want it. The interface works great and won’t block your view because of the way you can hide windows when not using them. The game could have easily been overwhelming on a tablet because of all the toolbars and windows, but the developers cleverly hide what’s not needed. Placing objects is also pretty accurate as is dragging them around to position them where needed. 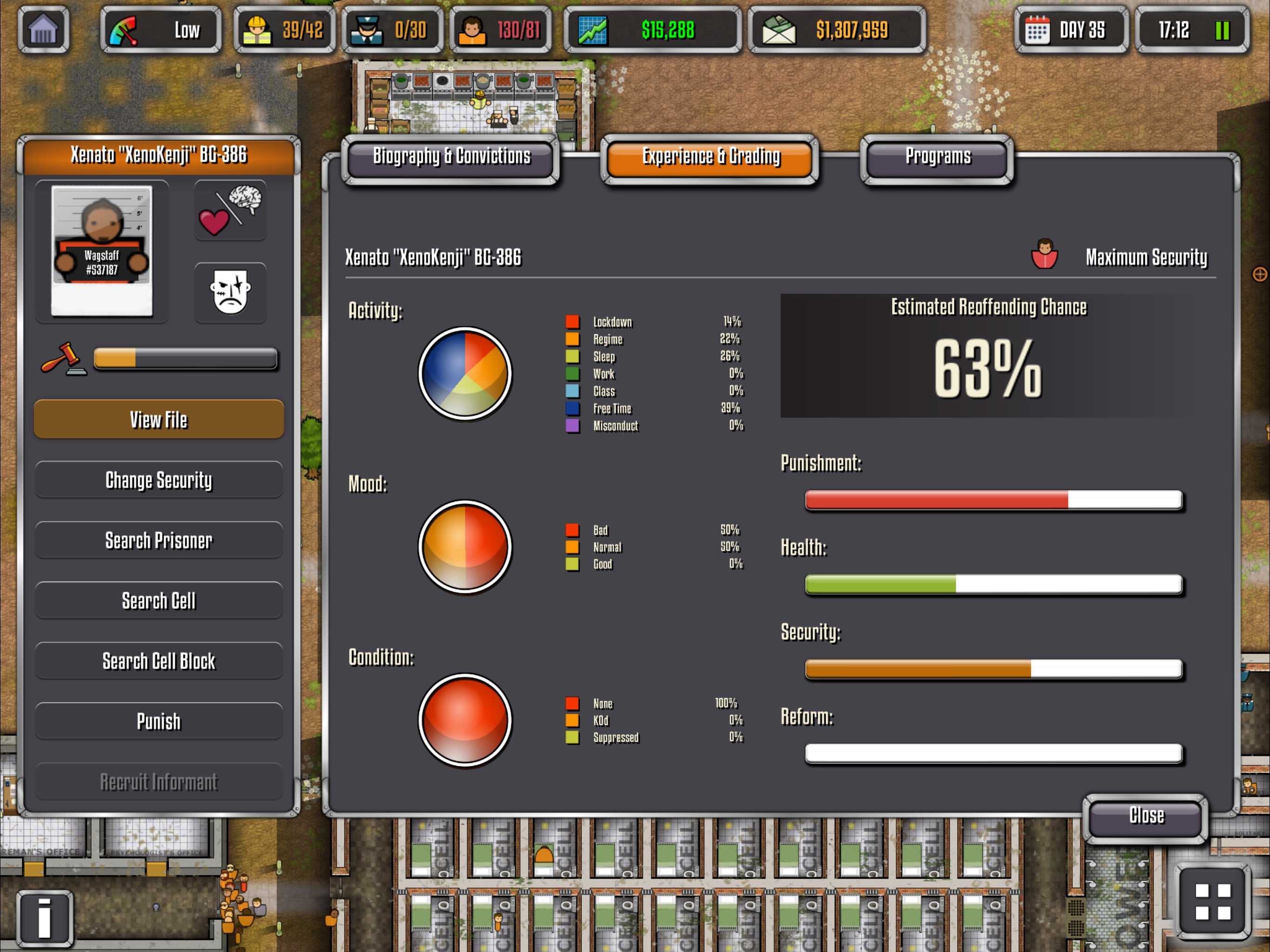 Once you build a prison, you can start navigating the bureaucracy that comes with it and decide where to invest your pretty tight budget. Do you want to add more cameras? Do you want to invest in getting body armor for your guards, do you want someone to help your inmates prepare for their court appearances? You can also start all kinds of programs like apprenticeships, group therapy, spiritual guidance, and so on. All these options allow you to build the kind of prison you want. Remember, this isn’t a game about building the worst kind of facility imaginable; if you so wish, you can build a very humane facility, which I was glad to see.

The depth of the simulation is easily seen when you tap on any of your prison’s inmates to learn more about them. Every single inmate comes with all kinds of information that helps in humanizing him (even if some of the crimes aren’t that “humane"). You can see their rap sheet and pleas, their activity broken down into detailed pie charts, their current needs, and so on. And you can decide whether the inmate is a threat to your facility and order your guards to search him, move him into solitary confinement, or even recruit him as an informant. And you can choose to follow that inmate around throughout the facility and see his actions in details. There’s a crazy amount of detail in the game, and you can easily spend a ton of time just getting to know your prison’s inmates. 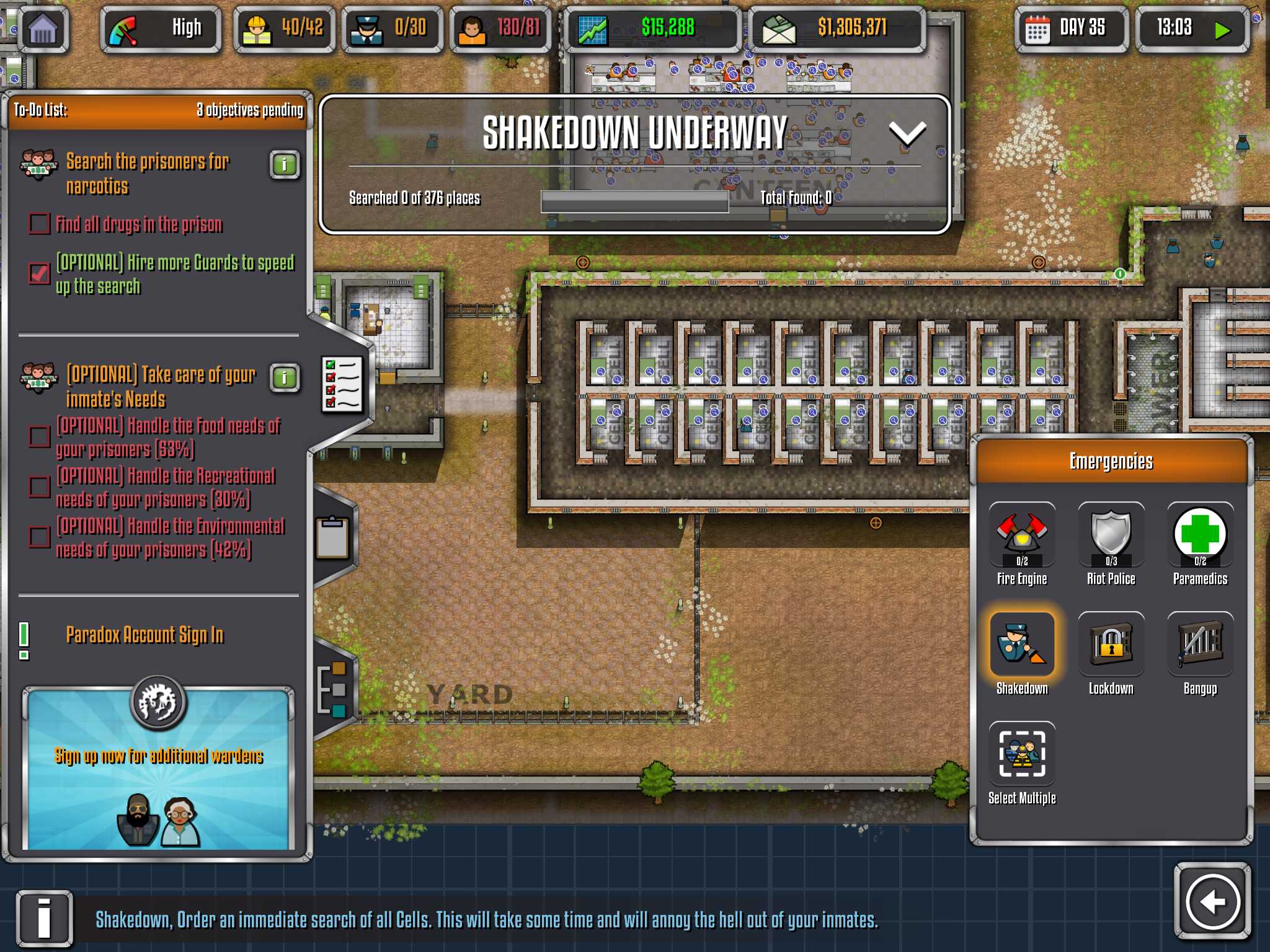 There are many ways to play Prison Architect. For instance, you can go for one of the Prison Stories, chapters that act as an extended tutorial and also let you play a more guided version of the game. This part of the game includes cut scenes to help tell the story, and if you decide to play the game, I suggest you go through this part first to get the hang of all the systems and mechanics before moving to build your own prison. Building your own prison gives you plenty of freedom to make the experience just the way you want it, including setting the kind of budget you want to adding prison gangs—which add to the mayhem—and weather and temperature—which make keeping people happy much more demanding. Finally, there’s the option of playing with premade prisons, where you can focus on trying to solve various challenges over building a prison from scratch.

Most of the content is hidden behind IAPs, but I actually like the way the developers broke down the game into smaller chunks because that allowed them to keep the app from being too expensive for the App Store while also letting players pay for the features they want. For instance, while $14.99 gets you the whole game, $4.99 gets you the Sandbox Mode while $2.99 gets you a chapter from the story. I think this is a pretty cool way to monetize premium games while avoiding hitting mobile players with sticker shock (although $14.99 for such a game is still a steal). 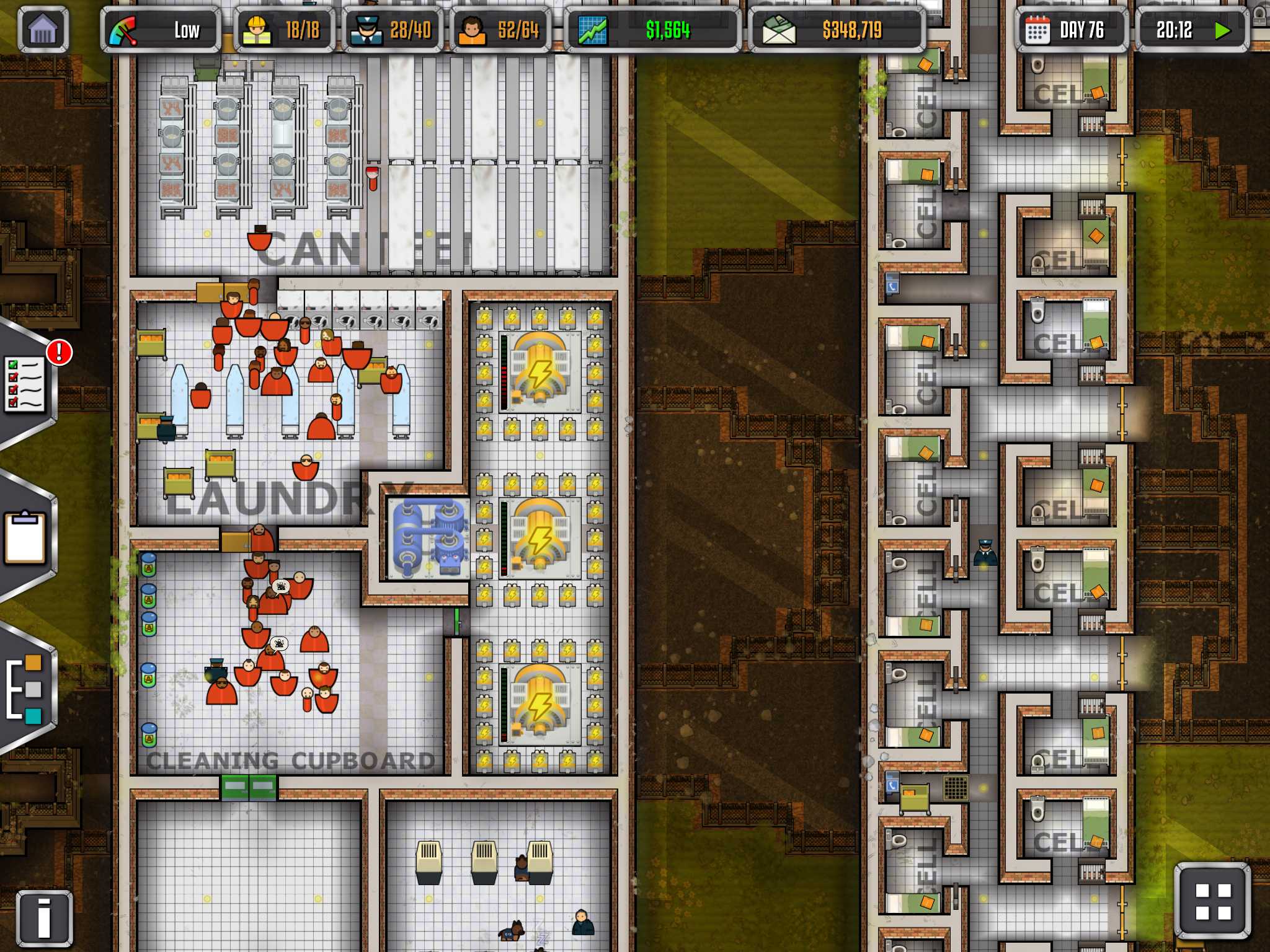 The art of Prison Architect is probably the game’s most memorable part, its cartoony feel clashing with the game’s somber theme and giving the game a kind of a comical look. Apparently all the people in these prisons lack feet. The art style allowed the developers to add plenty of prisoner variety, which helps avoid having a prison filled with what could be clones. The animations are very well done too, and overall the game looks really nice on tablets.

Overall, Prison Architect is a pretty deep simulation and management game that offers ton of things to do and ways to play. Don’t let its cartoony looks deceive you; this is a pretty hardcore and demanding game. If you like classic PC management games, you’re going to love Prison Architect. If you don’t care to dive deep into a game and are simply looking for a light game to pass the time, Prison Architect might not be for you. Personally, I had a blast playing the game, and I certainly recommend it. I’ve heard some users complain about bugs, but personally I had no issues playing the game. So, if you don’t find the theme disagreeable and want to play one of the most complex—but still accessible—management games on iOS, go grab Prison Architect.